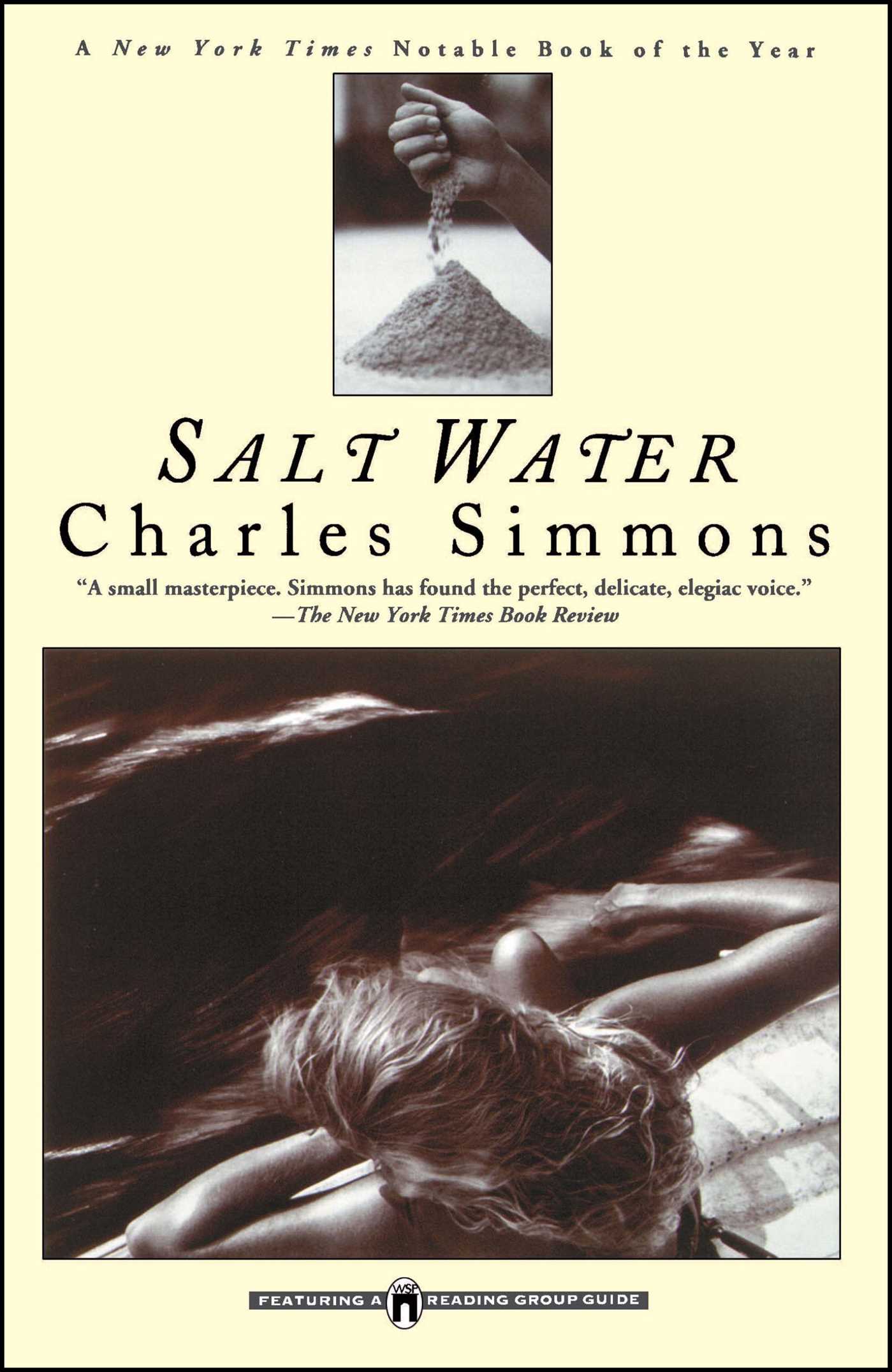 By Charles Simmons
LIST PRICE $15.95
PRICE MAY VARY BY RETAILER

In the summer of 1963 I fell in love and my father drowned....So begins this luminous story of a young man's passage through the dark turns of adult passion. A contemporary retelling of Turgenev's classic tale "First Love," Salt Water is set against a summer landscape of water, sand, and sky, and relates in seductive detail the momentous events that changed a family forever.
On an isolated island off the Atlantic coast, fifteen-year-old Michael and his parents begin their customary lazy vacation. When two exquisite flirts shatter the calm, Michael experiences the provocative mysteries and the consequences of various kinds of love -- romantic and sensual, paternal and filial.
William Faulkner Award-winning author Charles Simmons explores the very heart of the human need to be wanted, the intricacies of the father-son bond, and a boy's adolescence in all of its desires, confusion, and heartbreak.

By clicking 'Sign me up' I acknowledge that I have read and agree to the privacy policy and terms of use. Free ebook offer available to NEW US subscribers only. Offer redeemable at Simon & Schuster's ebook fulfillment partner. Must redeem within 90 days. See full terms and conditions and this month's choices.
Reading Group Guide
DISCUSSION QUESTIONS
1. Which is the more important relationship for Michael, the one with Zina or the one with his father?
2. Would the people in the story have acted differently today from the way they did in 1963?
3. Do you think Zina is permanently changed by the events in the summer of 1963?
4. Are any of the characters bad? Is there a villain in Salt Water?
5. At the end of the story Michael, now older than his father was when he drowned, says he still feels like a child. Why should this be so?
6. If the characters were real people, which would you like and which would you dislike?
7. If you were Michael, would you have acted differently?
8. Do you think Michael really wanted to kill his father?
9. Can you think of a better title for the book?
10. Would the story have been better if it had been told by the author instead of by Michael?
11. What do you think happens to Michael after the summer of 1963?
AUTHOR INTERVIEW
Q: You use an epigraph from Turgenev's First Love to signal the reader that Salt Water will resemble the earlier narrative. Why did you follow another writer's plot rather than invent a new one?
A: A number of reasons. But first let me say that Turgenev pointed out that First Love was almost literally autobiographical, so in a sense I took my story from life.
My four previous novels -- three comedies, and one rather serious book -- were all to some degree autobiographical. I had gradually become sick of myself as a subject. Needless to say, I wouldn't have thought of First Love if I hadn't admired it and all of Turgenev's work immensely. I meant Salt Water to be an homage as well as an exercise. The surprise to me was that in complicated ways Salt Water turned out to be autobiographical too. There's no escaping one's self, I suppose. At least not for me.
Q: What was the most difficult part of writing the book?
A: The invention. I can invent fantastic episodes by the dozen, but to invent everyday occurrences that are not taken from my experience, are not literary clichés, and yet are exactly right for the story I find very difficult. I have to try out ten to get one good one. A master of this among living writers is Anne Tyler; the grandmaster is Chekhov.
There is another aspect of a book like this which is not noticeable when done right but which takes a lot of attention: that is, writing a story narrated by a fifty-year-old man which yet creates the sensibility of a 15-year-old boy. The writer must watch not only his vocabulary but also his psychological perceptions; as the story progresses, the narrator's innocence must be replaced, slowly, by increasingly mature insights. Not easy. A few false steps and the reader loses confidence in you.
Q: Turgenev set First Love in the country, you set your story at the shore. Why?
A: I know the beach and ocean better. I spent every summer of my childhood there, from the day after school closed to the day before it opened. A novelist is supposed to be able to wing it, and I could have used the country, maybe. But the feelings connected with walking on sand, sailing a boat, getting a mouthful of water? Maybe not. Anyway, this book allowed me to pay homage to the shore as well as to Turgenev. I guess it's obvious, but I used marine material every chance I got -- the minister's sermon, Matthew Arnold's "Dover Beach," the Emily Dickinson poem, the New Testament quotation, even the father's birthplace, Neptune, N.J. This last, by the way, I chose because it is also the birthplace of Jack Nicholson, whose younger self I pictured when ever the father was onstage. Let me add that although this is a pretty serious book, it is full of private jokes -- putting them in not only amuses me but helps me maintain an interest in the story. Need it be said that the writer's worst danger is losing interest and nonetheless pushing forward. The most desperate strategy for a writer is setting himself the task of producing a certain number of words every day. Mailer maintains that a professional writer is one who can write even on bad days -- his last ten or so books show it.
Q: What do think in general of the reviews your books have gotten?
A: One might think that a writer is always gratified by a positive review and upset by a negative one. Not this writer. I've gotten some really dumb raves and some very intelligent put downs. The dumb raves embarrass me, the intelligent put downs interest me. The fact is that book reviews, next to love letters, are the easiest form of written composition. In writers' heaven a severe test would have to be passed before one was allowed to review books. When it comes to reviews in the here and now, publishers are interested in praise, the public in correct judgment, and the reviewers in looking good. That last would be changed.
Charles Simmons

Booklist A riveting story of youthful innocence consumed by betrayal. Remarkably enthralling and agonizingly revealing....Simmons...maneuvers unfalteringly between each of his characters....The book's opening line leads like a wick into a powder keg of unexpected consequences. Simply spellbinding.

The Wall Street Journal The mastery of the telling...keeps one continually off balance until the maelstrom of a conclusion.

Kirkus Reviews A little saga of adolescence...a perfectly-cut gem of its kind.

By Charles Simmons
LIST PRICE $15.95
PRICE MAY VARY BY RETAILER