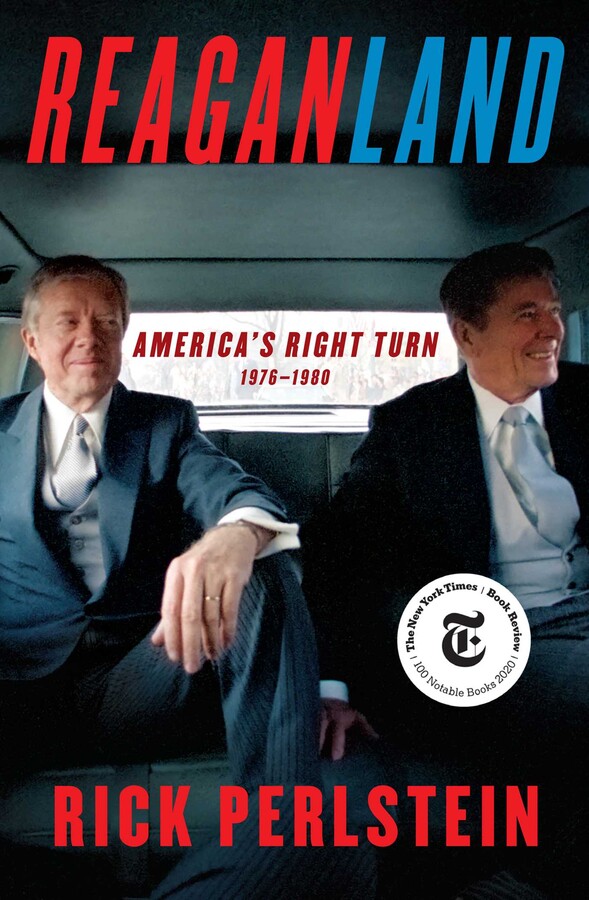 By Rick Perlstein
LIST PRICE $16.99
PRICE MAY VARY BY RETAILER

From the bestselling author of Nixonland and The Invisible Bridge comes the dramatic conclusion of how conservatism took control of American political power.

Over two decades, Rick Perlstein has published three definitive works about the emerging dominance of conservatism in modern American politics. With the saga’s final installment, he has delivered yet another stunning literary and historical achievement.

In late 1976, Ronald Reagan was dismissed as a man without a political future: defeated in his nomination bid against a sitting president of his own party, blamed for President Gerald Ford’s defeat, too old to make another run. His comeback was fueled by an extraordinary confluence: fundamentalist preachers and former segregationists reinventing themselves as militant crusaders against gay rights and feminism; business executives uniting against regulation in an era of economic decline; a cadre of secretive “New Right” organizers deploying state-of-the-art technology, bending political norms to the breaking point—and Reagan’s own unbending optimism, his ability to convey unshakable confidence in America as the world’s “shining city on a hill.”

Meanwhile, a civil war broke out in the Democratic party. When President Jimmy Carter called Americans to a new ethic of austerity, Senator Ted Kennedy reacted with horror, challenging him for reelection. Carter’s Oval Office tenure was further imperiled by the Iranian hostage crisis, the Soviet invasion of Afghanistan, near-catastrophe at a Pennsylvania nuclear plant, aviation accidents, serial killers on the loose, and endless gas lines.

Backed by a reenergized conservative Republican base, Reagan ran on the campaign slogan “Make America Great Again”—and prevailed. Reaganland is the story of how that happened, tracing conservatives’ cutthroat strategies to gain power and explaining why they endure four decades later. 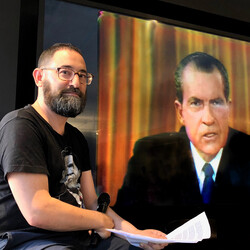 Rick Perlstein is the author of the New York Times bestseller The Invisible Bridge: The Fall of Nixon and the Rise of Reagan; Nixonland: The Rise of a President and the Fracturing of America, a New York Times bestseller picked as one of the best nonfiction books of 2007 by over a dozen publications; and Before the Storm: Barry Goldwater and the Unmaking of the American Consensus, which won the 2001 Los Angeles Times Book Award for history and appeared on the best books of the year lists of The New York Times, The Washington Post, and the Chicago Tribune. His essays and book reviews have been published in The New Yorker, The New York Times, The Washington Post, The Nation, The Village Voice, and Slate, among others. A contributing editor and board member of In These Times magazine, he lives in Chicago.

"An absorbing political and social history of the late 1970s...The joy of this book, and the reason it remains fresh for nearly a thousand pages of text, is that personality and character constantly confound the conventional wisdom. Perlstein’s broad theme is well known, partly because he has made it so through his three earlier volumes (Before the Storm, Nixonland and The Invisible Bridge) on the rise of the New Right in American politics. In the 1960s and 70s, liberals overplayed their hand and failed to see the growing disaffection of Americans who felt cut out or left behind. (Sound familiar?) But Perlstein is never deterministic, and his sharp insights into human quirks and foibles make all of his books surprising and fun...The 1980 election marks the end of this book, and, Perlstein says in his acknowledgments, the end of his four-volume saga on the rise of conservatism in America, from the early stirrings of Barry Goldwater to the dawn of the Age of Reagan. One hopes Perlstein does not stop there. Reaganland is full of portents for the current day."—Evan Thomas, The New York Times Book Review

“The pointillist canvas of Reaganland is mesmerizing…Perlstein’s book certainly presents the fullest picture we have of the Reagan years.” —Thomas Meaney, The Nation

"Perlstein masterfully connects deep currents of social change and ideology to prosaic politics, which he conveys in elegant prose studded with vivid character sketches and colorful electoral set-pieces....The result is an insightful and entertaining analysis of a watershed era in American politics."—Publishers Weekly (starred review)

"If you don’t think a chronicle of the rise of conservatism in American politics can be just as entertaining and illuminating as A Song of Ice and Fire, think again. Perlstein, a local historian, wraps up his acerbic, thoroughly researched, and energetic series on the conservative movement with this tome covering the four years just before Ronald Reagan began his tenure at 1600 Pennsylvania Avenue."—Chicago Magazine

“[M]ajestic…Perlstein sees American culture holistically, and his method is to implant you into the whole of a living tissue. Reaganland is so mammoth in scope and so scrupulously agnostic in presentation, each reader will likely find their own book in there. I walked away grateful for its larger arc.” —Stephan Metcalf, The Los Angeles Times

"One comes away from this book with a better understanding of how Carter was so thoroughly defeated....Perlstein casts a broad net, riffing on everything from Ted Bundy to New York Mayor Ed Koch, but that is part of the package here; by the end readers have more insight on the rising tide of conservative politics."—Library Journal

“A valuable road map that charts how events from 40 years ago helped lead us to where we are now.” —Kirkus Reviews (starred review)

"At more than 1,100 pages, Reaganland is the fourth and final volume of Perlstein’s massive, sweeping history of American conservatism in the postwar era...Reaganland is terrific, a work whose characteristic insight and soaring ambition make it a fitting and resonant conclusion to Perlstein’s astounding achievement....Perlstein’s rapid-fire style of chronological narrative is riveting, like the world’s most exciting microfilm scroll...Perlstein’s epic series shows political history and cultural history cannot be disentangled." —Jack Hamilton, Slate

“In Perlstein’s new book, the final volume of his series charting the ascendancy of the right in America, he traces Reagan’s political comeback and how he reinvigorated the Republican Party’s base with his pledge to ‘Make America Great Again.’ Perlstein, an engaging storyteller, offers a clear guide to the intellectual and ideological debates of the time.”—Joumana Khatib, The New York Times (“13 Books to Watch for in August 2020”)

“To reduce Perlstein’s works to political biographies would not be accurate. What he is writing is more of an excavation of the sediment produced by the media of the time: Especially in recent works, he uses archival documents sparingly, but reads deeply in the public record. The books are primarily political history, but they also take up cultural changes…Perlstein’s works are less X-rays of the internal structures of the nation at a given time than an MRI of its nervous system, showing when different regions of the brain lit up: here, activated by fear, here by sex, here by joy, here by anger. This is what has made his books grow in size—Reaganland runs to over 1,000 pages—they resemble reading several years of news, with the benefit of hindsight. They succeed when they can make sense of the structure of people’s feelings in a time of significant social division.”—Patrick Iber, The New Republic

“Rick Perlstein brings his series on the rise of conservatism in the U.S. to a conclusion with Reaganland. Examining the four years before Reagan took office, this volume pinpoints what led the country to elect the first man to run with the slogan ‘Make America Great Again,’ and the ruthless political tactics devised to secure his win that endure to this day.”—Juliet Helmke, Observer (“5 Most Anticipated Books of August 2020”)

“Perlstein is a great read for both the history and the narrative.”—John Warner, The Chicago Tribune

"[Perlstein's] books are an epic examination of the political, societal, and cultural tides that have brought us to today’s political shores."—Jeff Beer, Fast Company

By Rick Perlstein
LIST PRICE $16.99
PRICE MAY VARY BY RETAILER