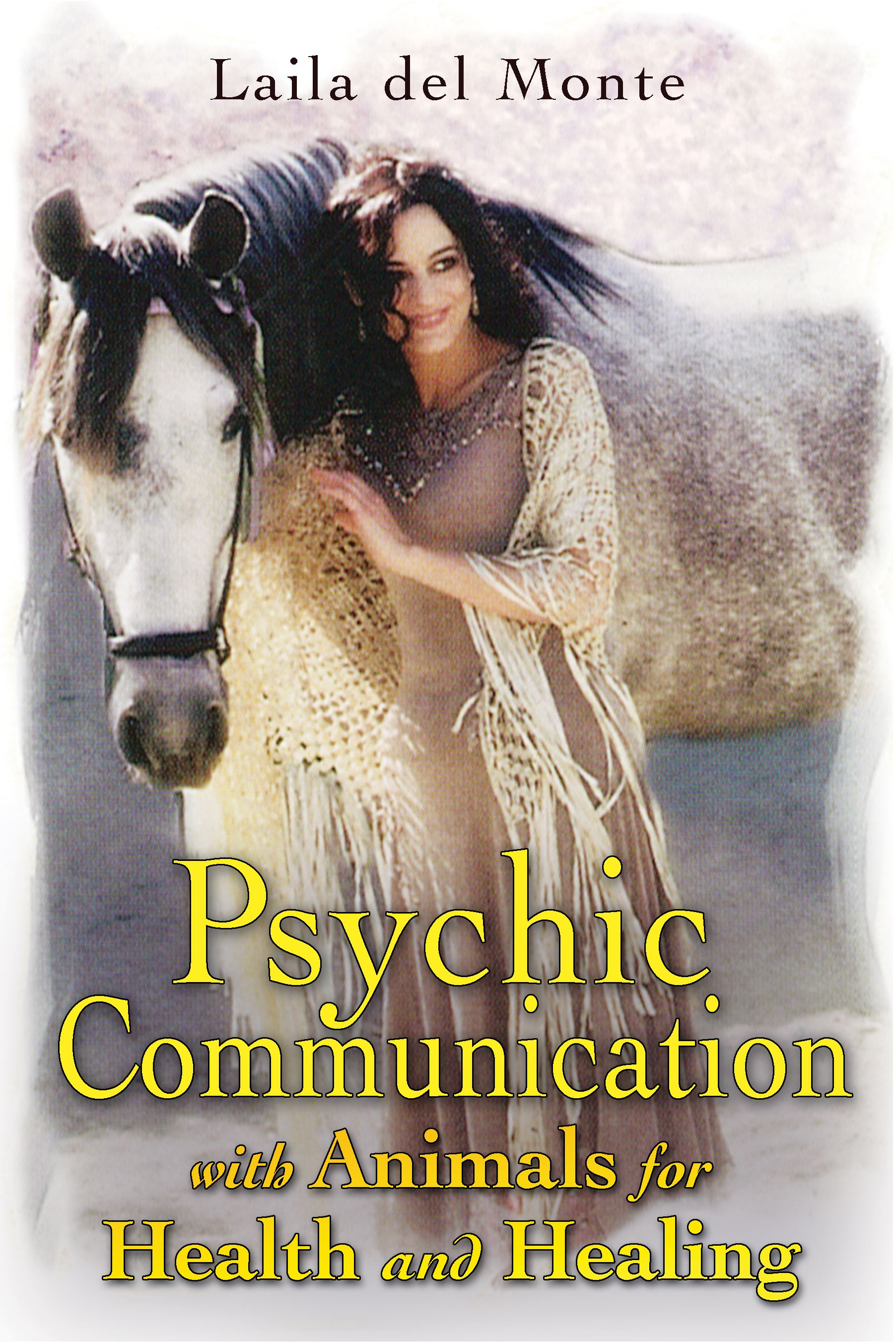 • Offers instruction on how to establish communication with animals

When Laila del Monte was a child growing up on the Balearic island of Formentera, she experienced a special bond with the animals that were a part of her life. Later, as she became entirely focused on her career as a flamenco dancer, she resisted those who told her that her true vocation was as a healer. But when her own health challenges jeopardized her dancing career, the healing energies she received from both her human and animal teachers raised her consciousness about the important insights animals have to offer on the state of our physical and emotional well-being.

In this book Laila del Monte reveals how the unconditionally loving nature of animals very often leads them to take on the physical pains and negative emotional experiences of the human beings in their lives. The animals absorb negative emotions such as guilt, anger, jealousy, and other issues that stop people from moving forward and reflect these back in their animal behavior. Through her work with countless animals suffering from behavioral disorders or who have been sick or injured, del Monte learned that the physical healing of the animals is directly tied to the emotional healing of the people they are close to.

The stories and situations she shares in this book demonstrate that learning what animals have to teach us about our lives does not require any magical formula or laborious training--it is part of our natural birthright. We need only to revive our own deep intuition to restore this connection. The authenticity and loving nature of del Monte’s approach is not only testimony to her dedication and amazing abilities but also shows us the way we can follow the same path simply and honestly.

Peggy of Los Angeles called me because her adorable four-month-old red kitten, Simba, was peeing everywhere in her apartment. I took his photo into my hands and communicated with the cat. Simba was young and strong, with a wealth of energy. He wanted to hunt. He had had his fill of being locked up in the house and watching life go by outside the window. He wanted to go out, run around, and climb trees. There were so many tantalizing odors outside! He was a warrior. Because Peggy did not understand this, he was peeing in the house. It was his way of expressing his discontent to her. I explained this to Peggy, and she accepted to take the risk of allowing him to go outside of the house. Starting on the day of his liberation, he no longer peed in the house.

Peggy called me back four years later because now Simba was peeing on her feet every morning while she drank her coffee, as well as on the beautiful blue drapes she had just bought. I therefore talked to Simba again and asked him what was going on. Was he unhappy? Did he need something? Why was he peeing on Peggy’s foot every day? No, there was nothing wrong; everything was going just fine. Everything was just great for him. It was Peggy who had the problem. He showed me what Peggy was currently going through: “She is frustrated now, and irritated. She is in love with someone who does not return her affection. She is sad and depressed.” Simba did not know how to help her. I admit that his solution of peeing was not necessarily the ideal way of helping Peggy, but cats have their own techniques. It is impossible to intervene; they have their own way of doing things. I tried to discuss this more with Simba, but he kept repeating the same things to me.

I, therefore, decided to ask Peggy if this was true. Was there a man in her life? Was she involved in a romantic relationship? At my questions, Peggy began weeping over the telephone. Yes, she was in love with a man, but things were not turning out as she had hoped. He did not treat her well and made fun of her. She was incapable of getting him out of her mind. It was like an obsession. Things had been going on in this way for months. I explained to her that Simba was urinating on her foot--a forceful manifestation--in order to bring her back to reality. Simba was telling her she should simply let go and get her life back in hand.

We spoke a little about her life and her relationships. She decided to leave this man. I had the impression that Simba, like in a cartoon, was rubbing his whiskers behind her back, thinking: “This could not have happened too soon. She sure took her sweet time. . . . Good riddance!”

The next morning Peggy was drinking her coffee and Simba came by and rubbed against her legs. There was no particular reason, simply affection. He displayed the same behavior the next day and all the days that followed. He had his techniques, this little guru disguised as a cat.

Another time I was called because a cat, Sandy, was urinating on an old chair that had cost five thousand dollars. (It is better in these situations to use an expensive object; it is more effective!) Kathleen was a psychotherapist. She brought Sandy to the veterinarian, but this provided no answers. The cat was in perfect health. Kathleen had recently married and had moved in to a new house. I told myself, when looking at Sandy’s photo, that he must surely be jealous of the husband. He had lived alone with Kathleen for years before this marriage. I communicated with Sandy. He was a very fit, gray tiger who liked to sleep on the sofas and seemed to have a blasé attitude of complete indifference to everything. The fact is that no animal really has this kind of indifferent attitude, and this cat was very attached to Kathleen. I could not perceive anything out of the ordinary. He showed me his life in the new house with Kathleen’s husband, who did not get on his nerves too much.

Of course, he was not very happy to see this man taking his place in the bed, but if Kathleen was happy, then he would accept it. So why was he peeing on the chair worth five thousand dollars? Kathleen had not expressed this to anyone, but she was scared of losing her second husband like she had her first one, so she did not share with him what she was feeling. If something was not going right, she kept it to herself. This made Sandy very ill at ease. Things were no longer as they once had been. He had enjoyed a complete symbiosis with Kathleen. He could feel the tension rising inside her, as well as her resentment. Urinating on the chair was his method of transmitting what he felt to her.

The next day I telephoned Kathleen and attempted to explain to her why her cat was urinating on her antique chair. She listened to what I had to say without saying a word. I sensed she felt a little hostile. She had no desire to be psychoanalyzed by her cat! I gave her more details and explained further why Sandy was behaving this way. It was for her sake because he loved her. Her voice cracked a little and she began to understand. She had no desire to reveal herself to me, but I felt she had grasped the situation. A month later she announced to me that Sandy was no longer peeing on the chair.
Laila del Monte

Laila del Monte earned a master’s degree in the history of religion from the Sorbonne before becoming an acclaimed flamenco dancer. She teaches animal communication in the United States and in Europe, her specialty being “problem horses” and healing sick and injured animals. She lives in Los Angeles and Paris.

“My Swedish Warmblood stallion named L.A. Baltic Inspiration is greatly improved from a longstanding problem, which seemed to have no apparent solution. More important, he is physically fit, healthy, and happy with his life. I am very grateful to Laila and her guides for their assistance.”

"Laila del Monte is someone I admire and consider one of the clearest communicators with animals as well as having access to the highest consciousness and energy. She had demonstrated this redundantly in my presence and I strongly endorse and suggest everyone read her book and apply the incredible knowledge within. She is on the forefront of bringing awareness that animals have souls, are very subjective and often take on the owners unresolved issues to the point of physically manifesting disease if not addressed and healed beforehand. In this work she is unsurpassed."

"Perhaps the most compelling sections of the book are those where del Monte illustrates why animals come into our lives. . . . Their main reason for entering our lives, according to del Monte, is to allow us to experience love. Animals are highly qualified specialists in demonstrating unconditional love. This book gives numerous examples of the human beings who never experienced true love until they became attached to their pet."

"I encourage anyone that has a pet of any kind to consider reading Psychic Communication with Animals for Health and Healing by Laila del Monte to get a better understanding of the healers we have in our midst. Using our own intuition and guidance we can communicate with our counterparts in healing ourselves, them, and our planet."

"Psychic Communication with Animals for Health and Healing is a choice pick for spiritual readers who want to understand another aspect of healing."