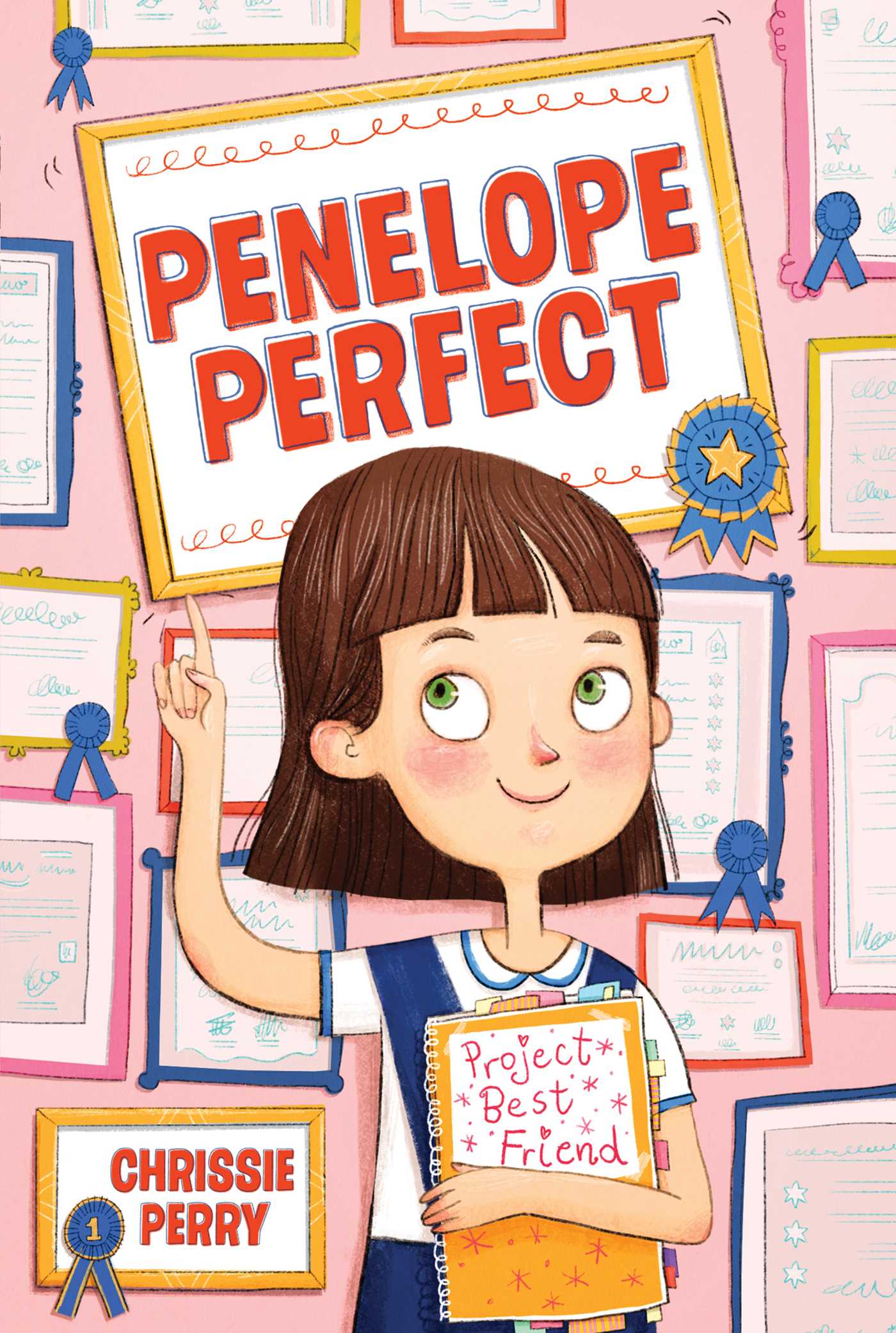 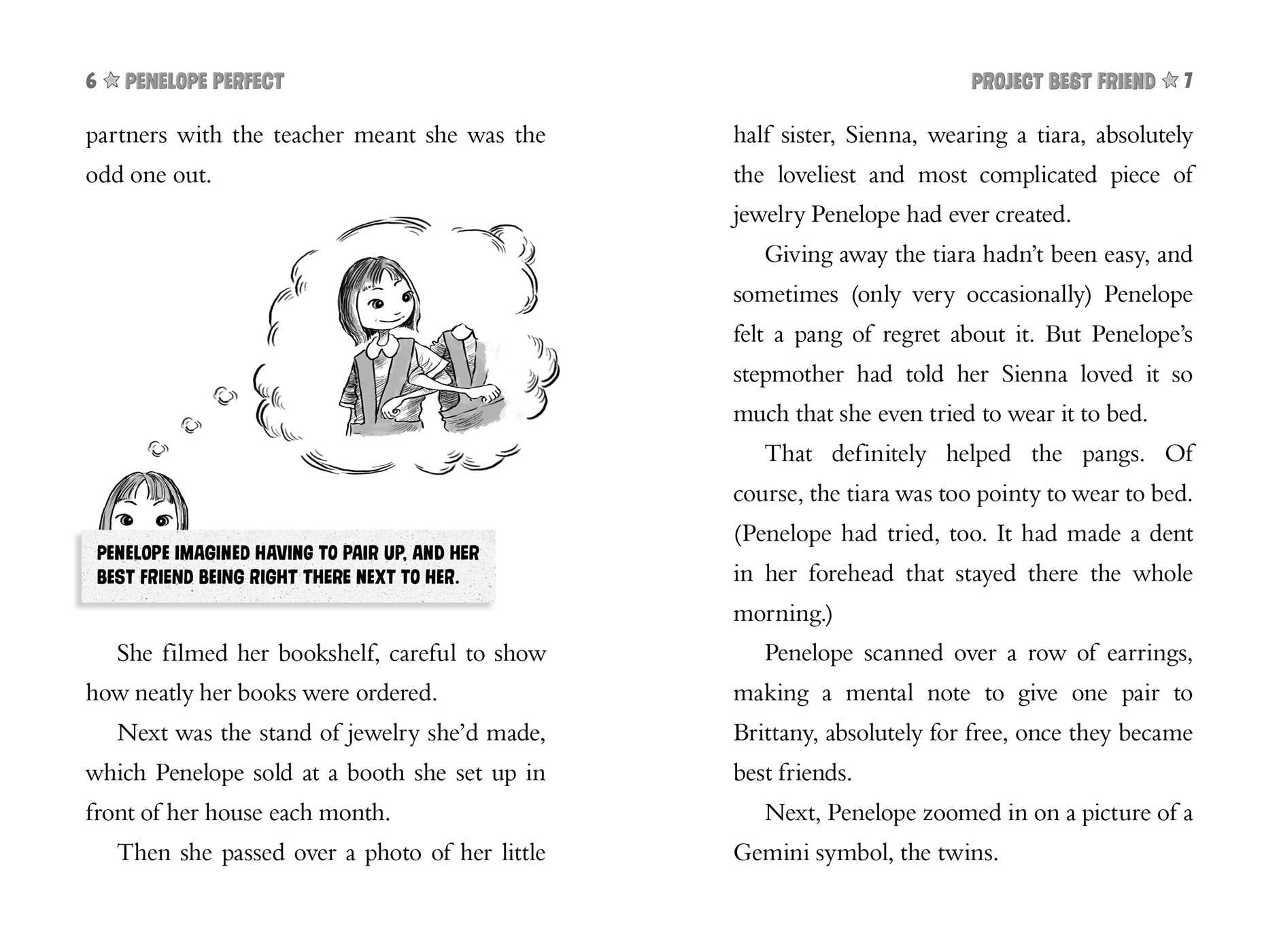 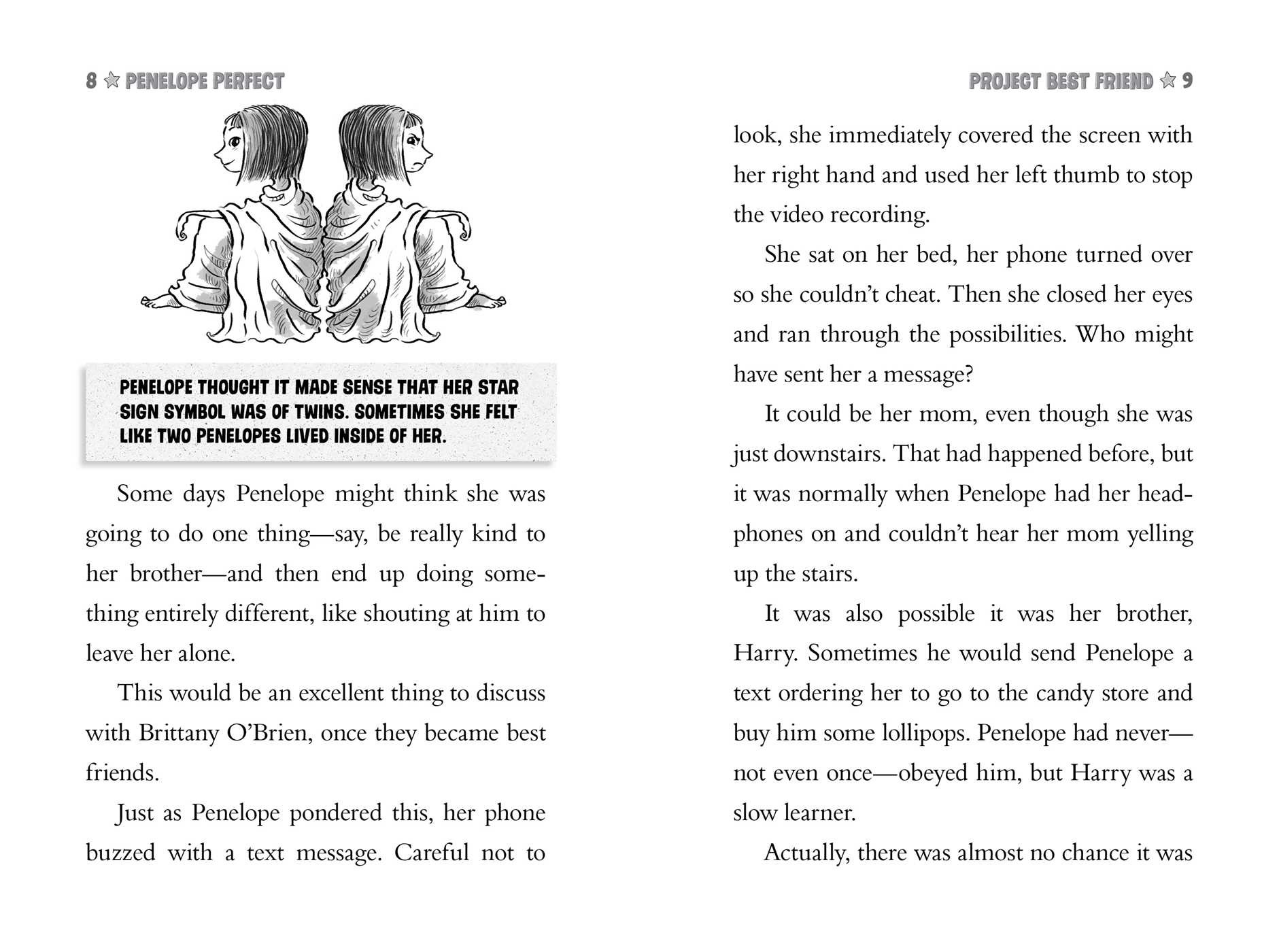 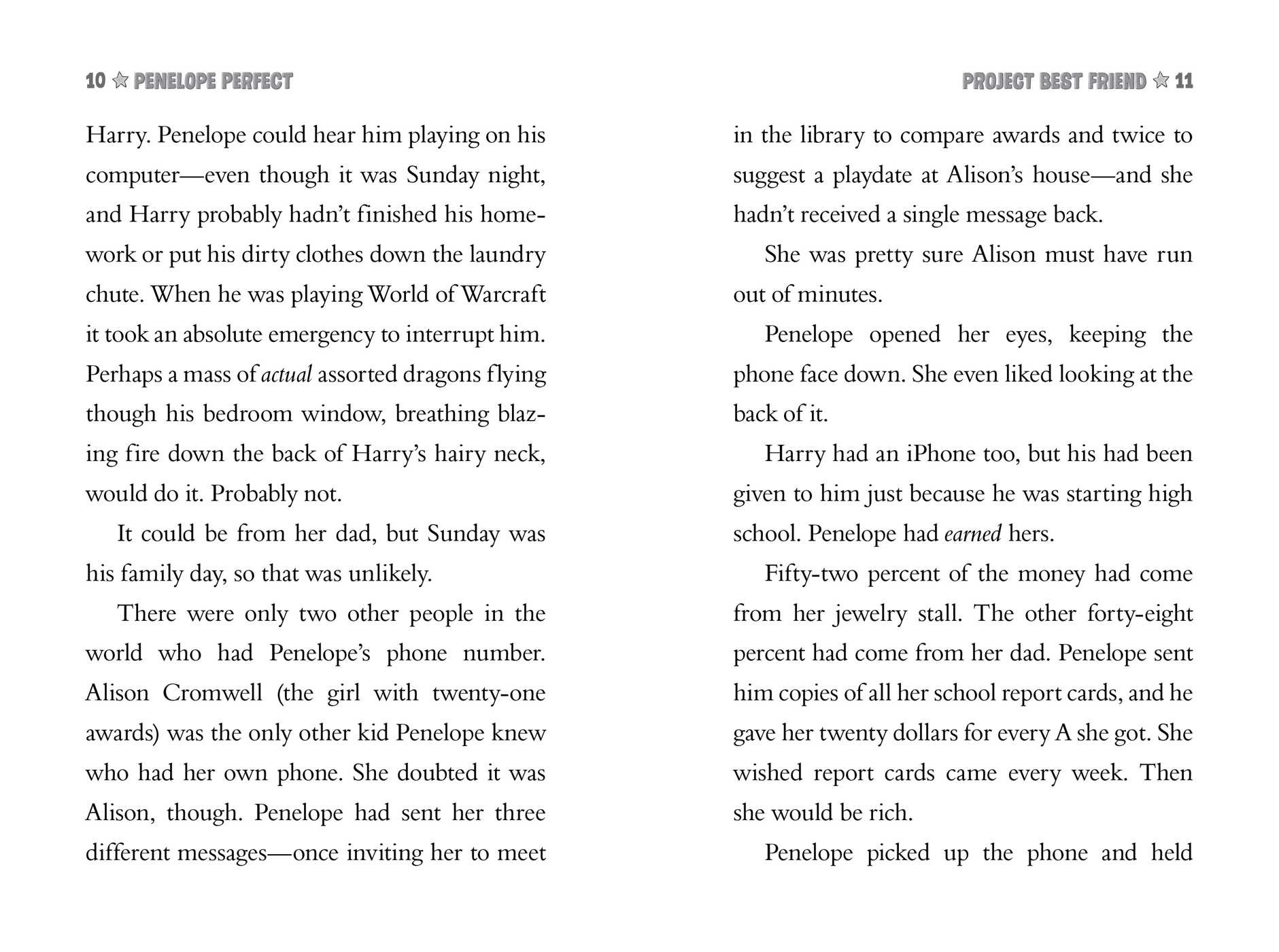 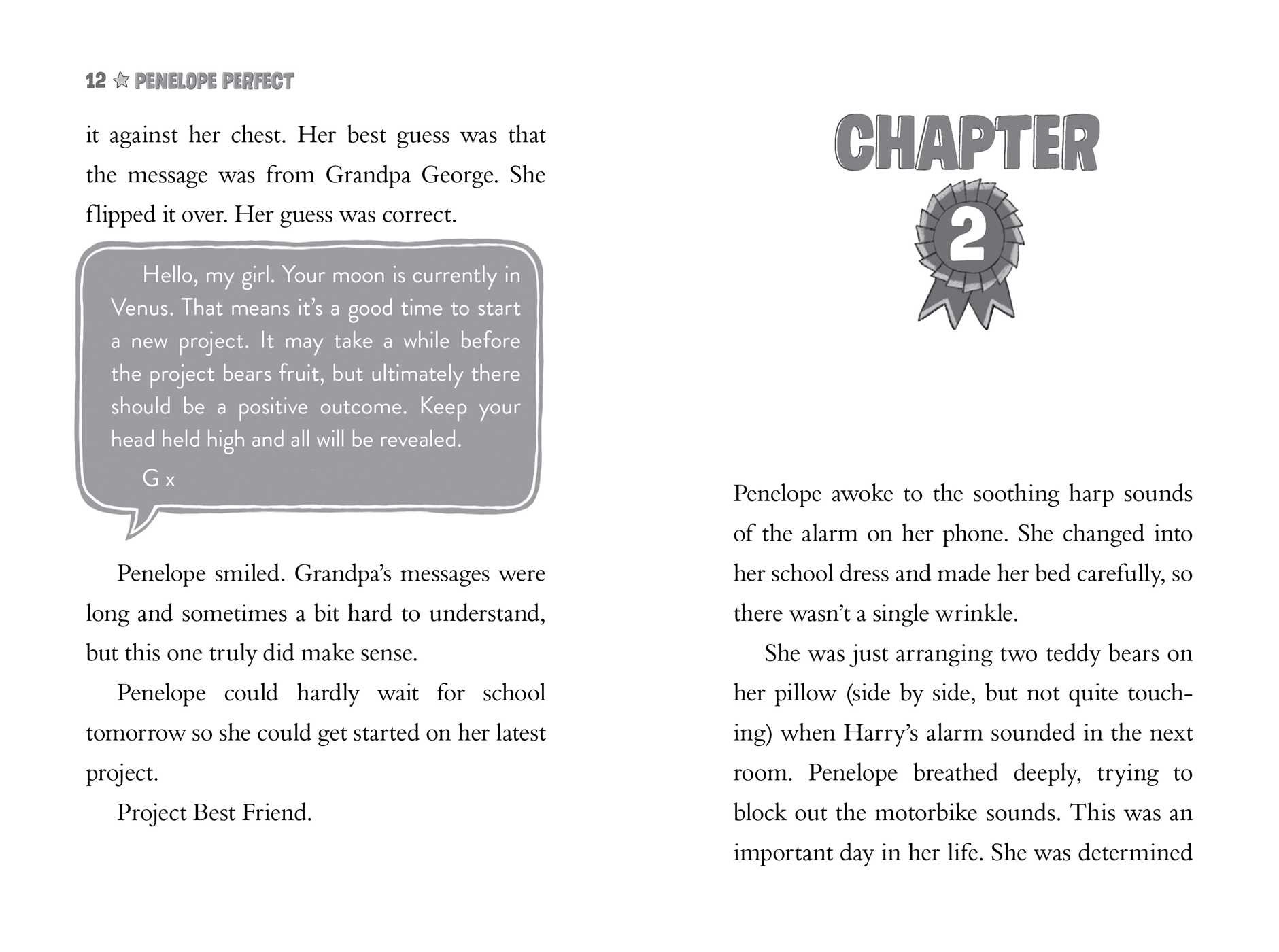 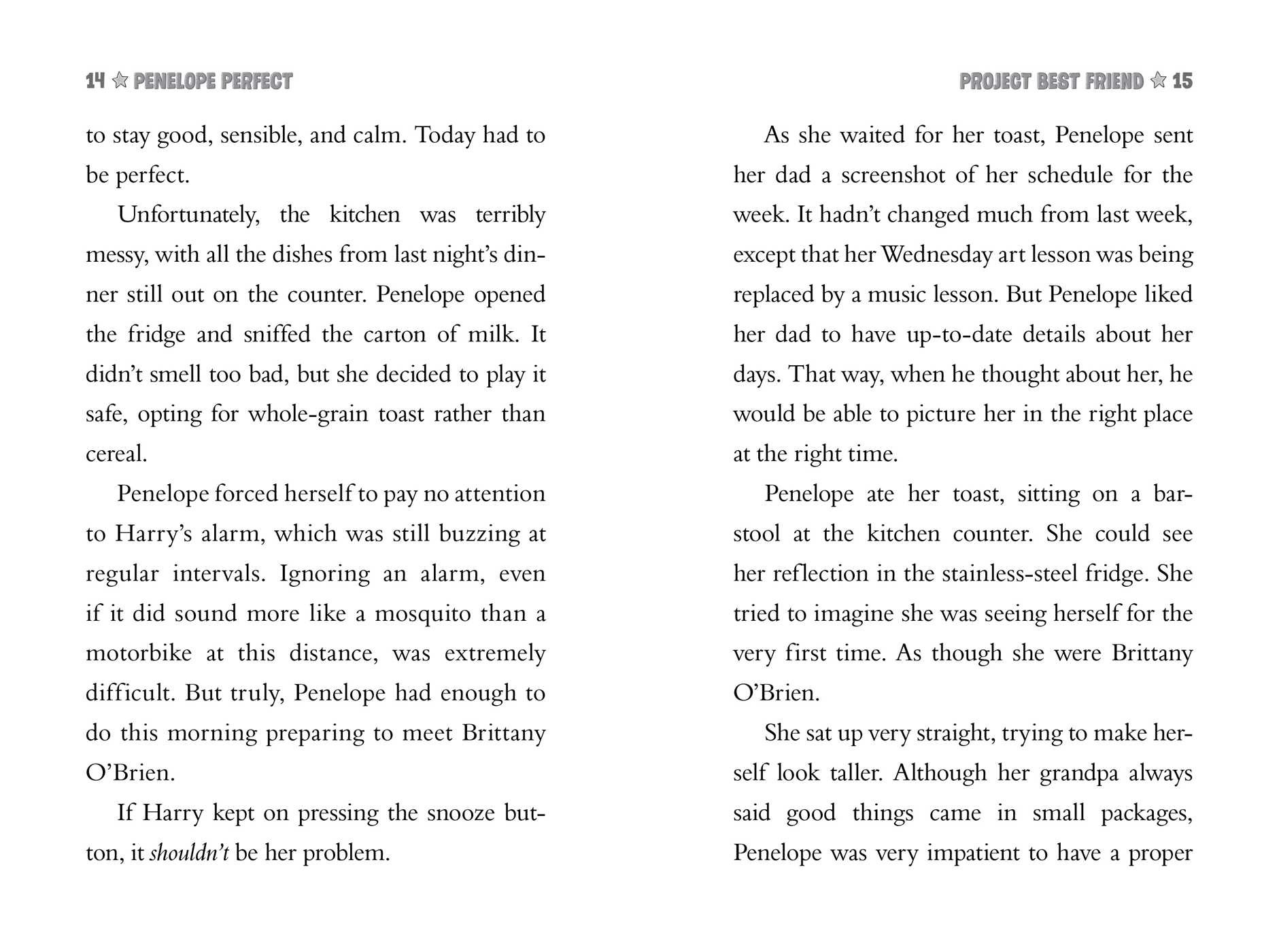 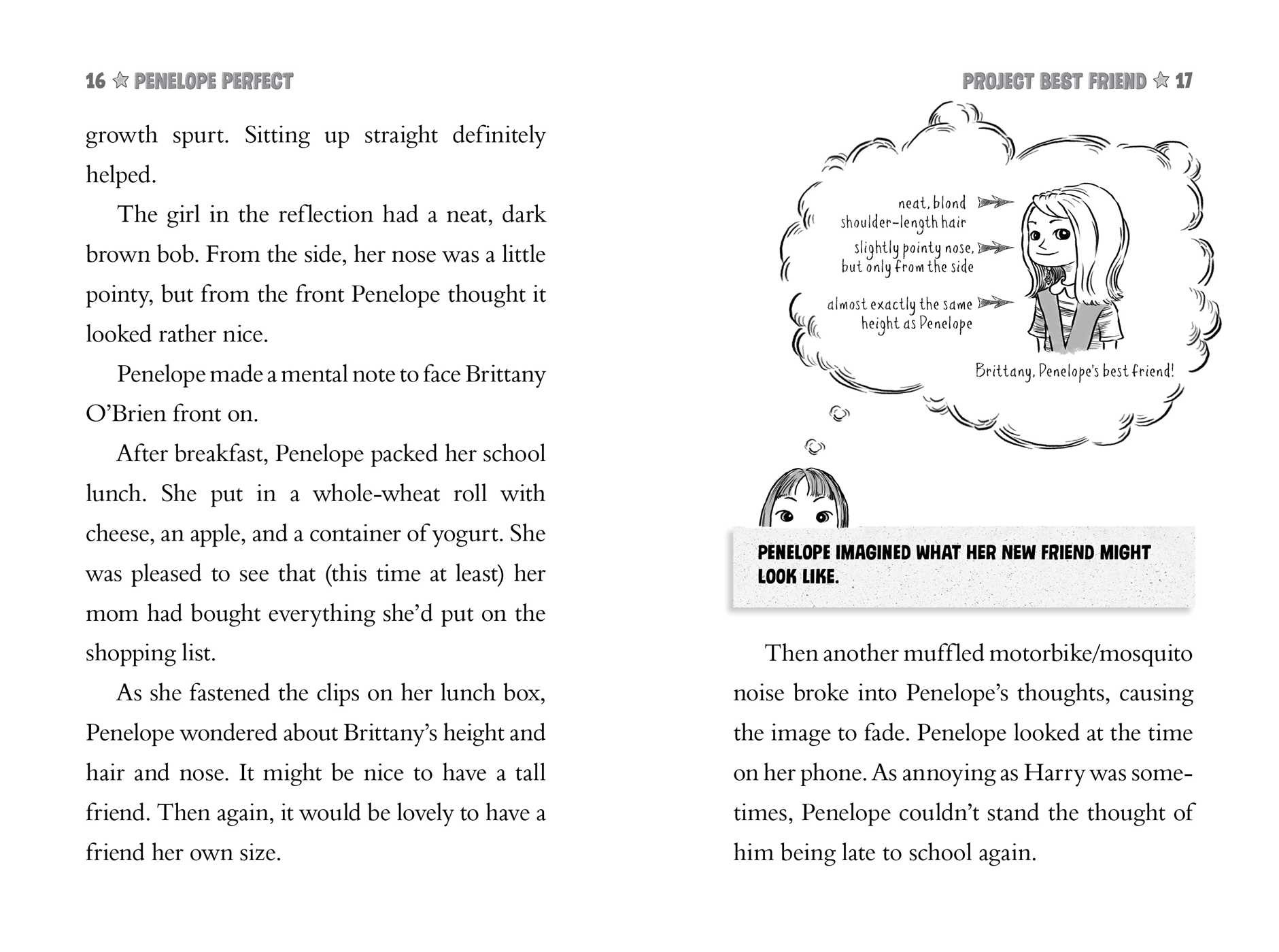 Penelope Kingston tries to convince the new girl in town to become her best friend in this charming start to the brand-new Penelope Perfect chapter book series.

Penelope Kingston wants to be perfect. And most of the time she is good, sensible, and calm. But then sometimes Penelope is bossy, angry, and frustrated. She is never quite sure which side of her personality is going to be stronger on any given day.

But there’s one part of her life that is definitely not perfect: she doesn’t have a best friend. It is time for Penelope to get a best friend of her own.

But it isn’t easy finding a best friend, and it definitely isn’t easy trying to be perfect all of the time. Penelope learns that sometimes the best idea is to forget to try!


Penelope Kingston wanted to be perfect. And most of the time she was good, sensible, and calm. But nobody is perfect. Sometimes Penelope was bossy, angry, and frustrated. It was like (and this is very weird) there were two Penelopes inside her. She was never sure which one was going to be stronger on any given day.

So even though she knew she wasn’t perfect, Penelope tried hard to be excellent at most things. After all, excellence was very nearly perfection.

Penelope sat on her carefully made bed in her very neat bedroom. She liked everything to be just so. It made her feel a bit panicky when her room was messy.

She liked all her old teddy bears to be facing the same direction—toward the window, where she secretly thought they enjoyed the view. She liked her pens and pencils (sharpened, of course) to be nice and straight, points up, in her favorite mug.

Her books were currently organized by size, but last month she had arranged them by color. It all depended on her mood.

The rest of the house was usually too chaotic for Penelope’s liking. Her bedroom was where she could feel calm and happy.

Penelope picked up her iPhone and cradled it in her hand. She loved her phone so much—more than she thought she probably should. She scrolled across to the camera function, chose video, and hit record, filming herself at arm’s length.

“Hi!” she began, rather breathlessly. “I’m Penelope Kingston, and this is my bedroom!”

She reversed the focus of the camera and started to scan her room. She filmed the award certificates that were pinned up on her wall in perfect rows and then chose two to zoom in on. The first was a very special award called the Watchful Eye. Penelope had received it for taking good care of a kindergarten girl who had fallen over in the playground. Mr. Joseph had been on yard duty that day, but Penelope was the one who had spotted the emergency. She had taken the girl to the nurse’s office and even stayed to keep checking her bandages way after the nurse had said she could leave (though unfortunately all that information was not written on Penelope’s actual award).

The second was an award for punctuality—Penelope had a perfect record for being on time to class.

Every Friday at assembly, Penelope’s school held an awards ceremony. Over the years, Penelope had earned thirty-six awards. (The next biggest award winner was Alison Cromwell, who had only twenty-one.) Of course, only some of the awards were on the wall. The rest were filed away in a special box with a lock and key, along with other important documents, like Penelope’s birth certificate.

Penelope had decided that a video of her room would be the perfect introduction for the new girl. From the moment Ms. Pike had announced that a new girl would be joining their class that week—and that her name was Brittany O’Brien—Penelope just knew her life was about to change. Soon, everything would be perfect.

Second, it was absolutely time Penelope had a best friend. Everyone else in her class had one.

Whenever they had to get into pairs for activities or excursions, Penelope never knew who she would be paired with. And although she loved Ms. Pike, she knew that being partners with the teacher meant she was the odd one out.

PENELOPE IMAGINED HAVING TO PAIR UP, AND HER BEST FRIEND BEING RIGHT THERE NEXT TO HER.

She filmed her bookshelf, careful to show how neatly her books were ordered.

Next was the stand of jewelry she’d made, which Penelope sold at a booth she set up in front of her house each month.

Then she passed over a photo of her little half sister, Sienna, wearing a tiara, absolutely the loveliest and most complicated piece of jewelry Penelope had ever created.

Giving away the tiara hadn’t been easy, and sometimes (only very occasionally) Penelope felt a pang of regret about it. But Penelope’s stepmother had told her Sienna loved it so much that she even tried to wear it to bed.

That definitely helped the pangs. Of course, the tiara was too pointy to wear to bed. (Penelope had tried, too. It had made a dent in her forehead that stayed there the whole morning.)

Penelope scanned over a row of earrings, making a mental note to give one pair to Brittany, absolutely for free, once they became best friends.

Next, Penelope zoomed in on a picture of a Gemini symbol, the twins.

PENELOPE THOUGHT IT MADE SENSE THAT HER STAR SIGN SYMBOL WAS OF TWINS. SOMETIMES SHE FELT LIKE TWO PENELOPES LIVED INSIDE OF HER.

Some days Penelope might think she was going to do one thing—say, be really kind to her brother—and then end up doing something entirely different, like shouting at him to leave her alone.

This would be an excellent thing to discuss with Brittany O’Brien, once they became best friends.

Just as Penelope pondered this, her phone buzzed with a text message. Careful not to look, she immediately covered the screen with her right hand and used her left thumb to stop the video recording.

She sat on her bed, her phone turned over so she couldn’t cheat. Then she closed her eyes and ran through the possibilities. Who might have sent her a message?

It could be her mom, even though she was just downstairs. That had happened before, but it was normally when Penelope had her headphones on and couldn’t hear her mom yelling up the stairs.

It was also possible it was her brother, Harry. Sometimes he would send Penelope a text ordering her to go to the candy store and buy him some lollipops. Penelope had never—not even once—obeyed him, but Harry was a slow learner.

Actually, there was almost no chance it was Harry. Penelope could hear him playing on his computer—even though it was Sunday night, and Harry probably hadn’t finished his homework or put his dirty clothes down the laundry chute. When he was playing World of Warcraft it took an absolute emergency to interrupt him. Perhaps a mass of actual assorted dragons flying though his bedroom window, breathing blazing fire down the back of Harry’s hairy neck, would do it. Probably not.

It could be from her dad, but Sunday was his family day, so that was unlikely.

There were only two other people in the world who had Penelope’s phone number. Alison Cromwell (the girl with twenty-one awards) was the only other kid Penelope knew who had her own phone. She doubted it was Alison, though. Penelope had sent her three different messages—once inviting her to meet in the library to compare awards and twice to suggest a playdate at Alison’s house—and she hadn’t received a single message back.

She was pretty sure Alison must have run out of minutes.

Penelope opened her eyes, keeping the phone face down. She even liked looking at the back of it.

Harry had an iPhone too, but his had been given to him just because he was starting high school. Penelope had earned hers.

Fifty-two percent of the money had come from her jewelry stall. The other forty-eight percent had come from her dad. Penelope sent him copies of all her school report cards, and he gave her twenty dollars for every A she got. She wished report cards came every week. Then she would be rich.

Penelope picked up the phone and held it against her chest. Her best guess was that the message was from Grandpa George. She flipped it over. Her guess was correct.

Hello, my girl. Your moon is currently in Venus. That means it’s a good time to start a new project. It may take a while before the project bears fruit, but ultimately there should be a positive outcome. Keep your head held high and all will be revealed.

Penelope smiled. Grandpa’s messages were long and sometimes a bit hard to understand, but this one truly did make sense.

Penelope could hardly wait for school tomorrow so she could get started on her latest project.

Chrissie Perry is the author of over thirty books for children and young adults, including thirteen books in the popular Go Girl series, the award-winning Whisper, and the Penelope Perfect series. She lives in St. Kilda with her husband, three children. Like Penelope Kingston, Chrissie believes it’s great to aim for excellence. But she also has a sneaking suspicion that going with the flow every now and then can also work out just fine.

Perry sketches believable characters in familiar situations. One of the refreshing parts about this tale is that classmates pull back from bullying behavior, policing themselves when the situation seems ready to get out of hand. This series kickoff is a warmly satisfying and very useful exploration of coping strategies—and friendship.

“. . . following her [Penelope’s] thought processes offers insight into a certain kind of child. (We likely all know—or are—a Penelope.) The delightful, small black-and-white illustrations with their elegant captions sprinkled throughout the book round out the book, well, perfectly!