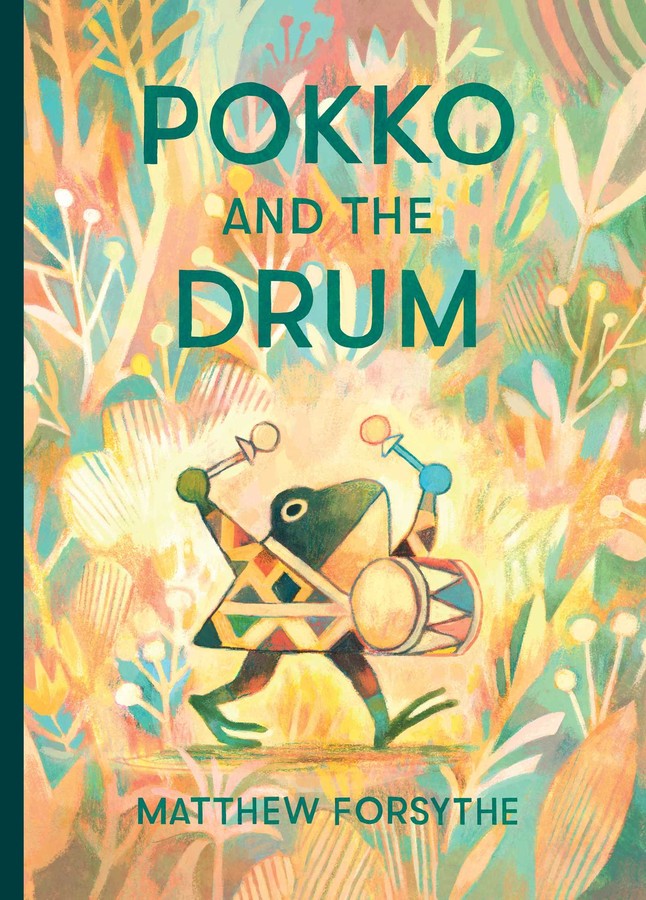 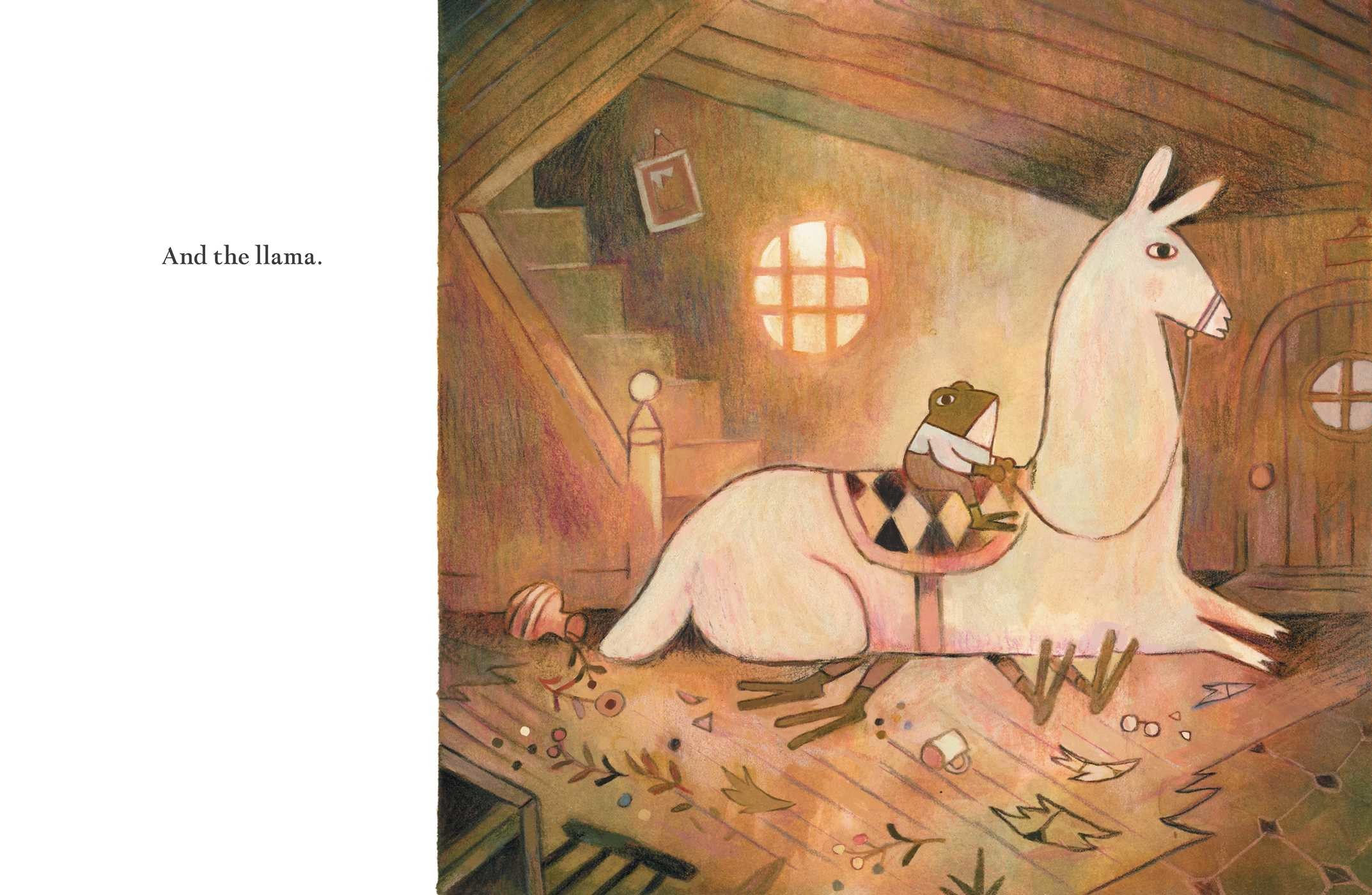 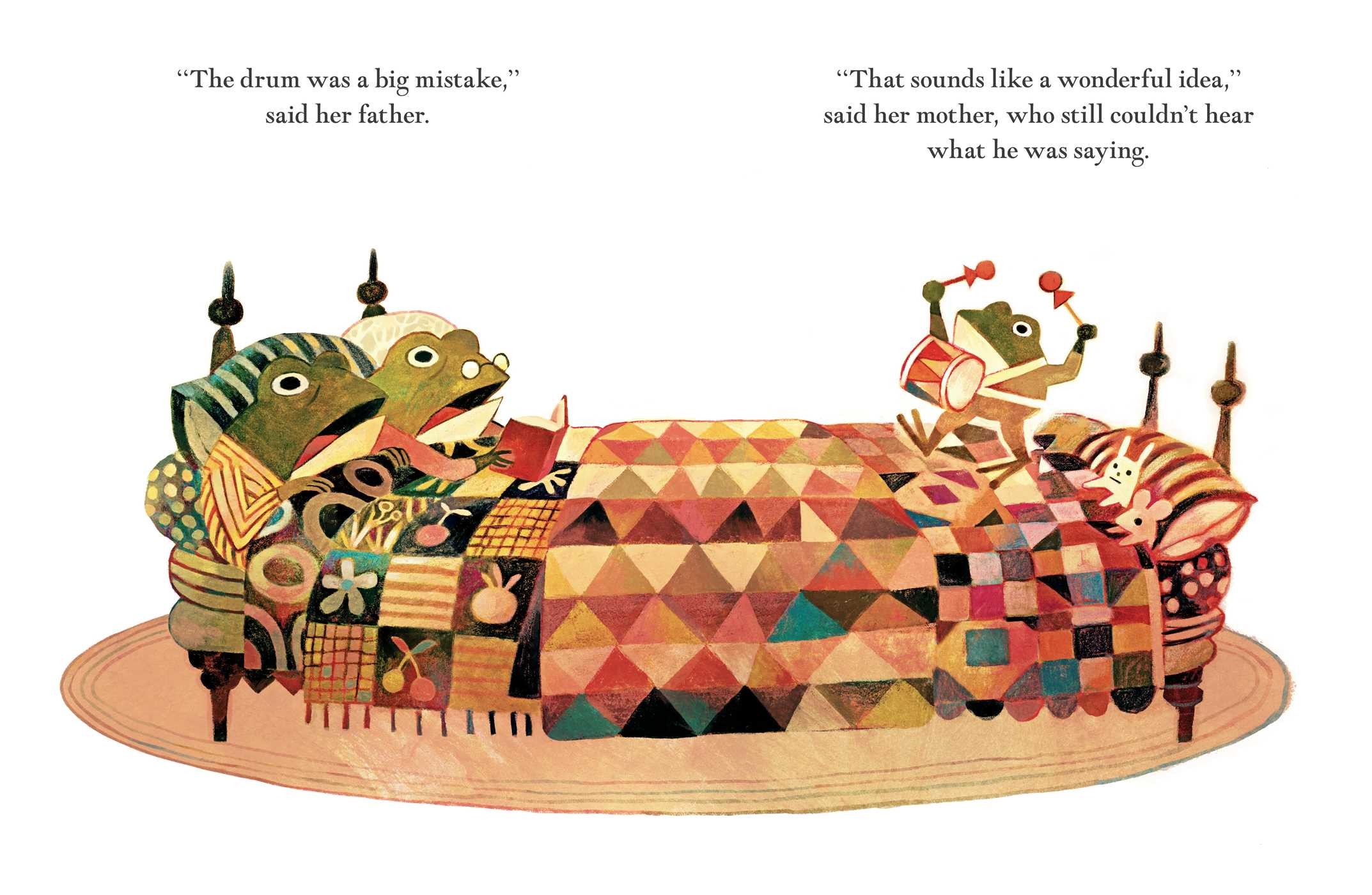 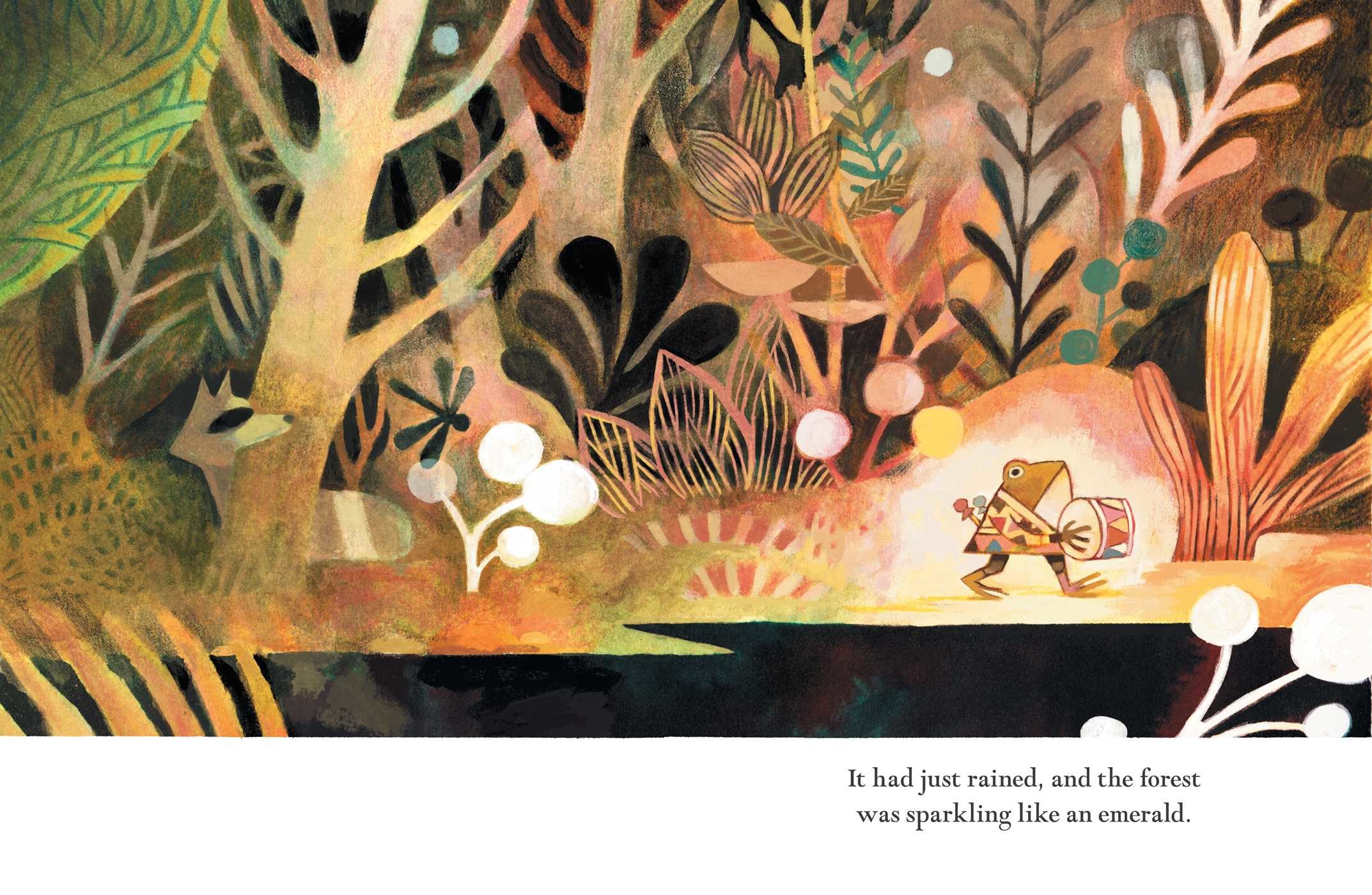 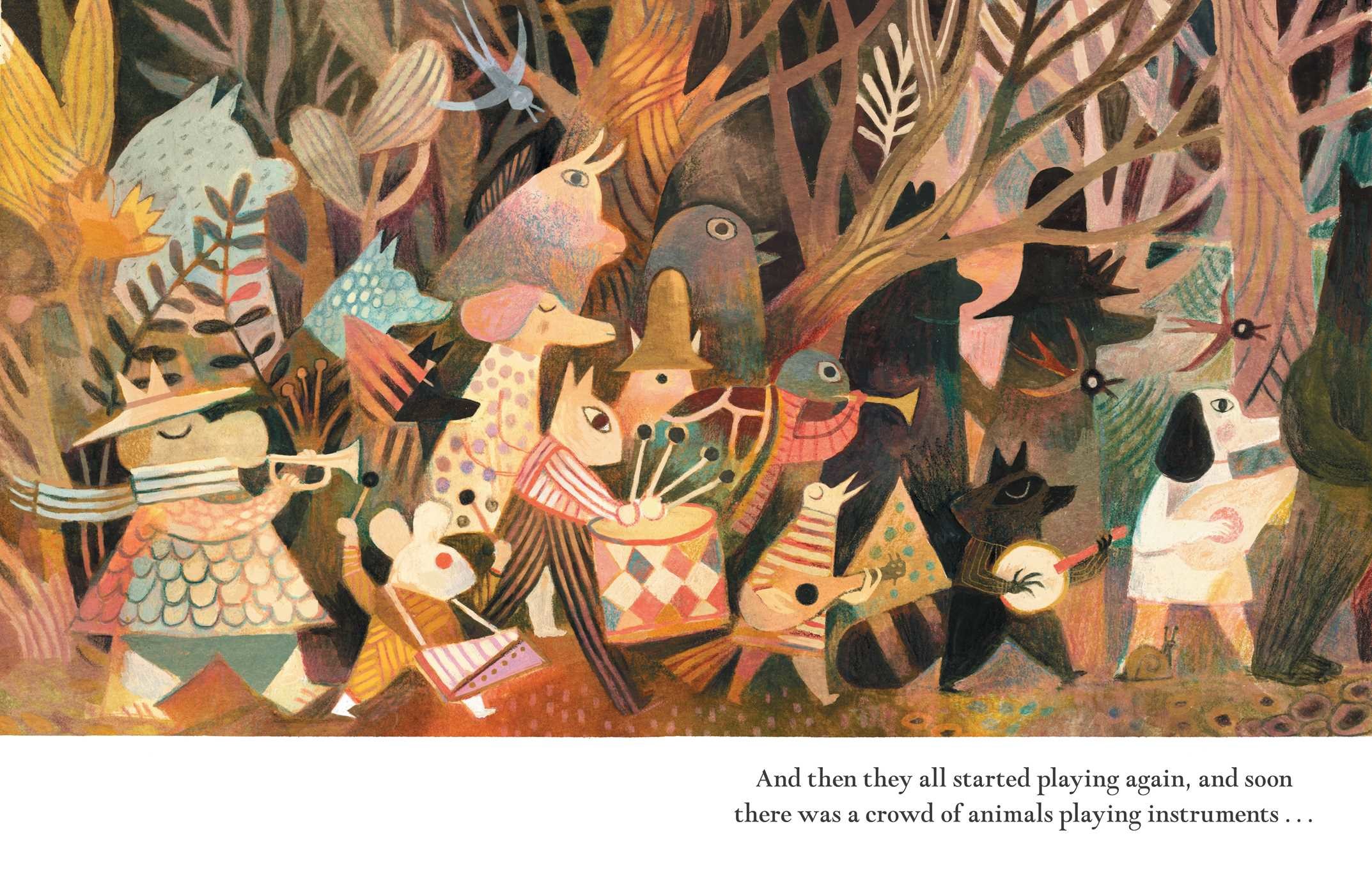 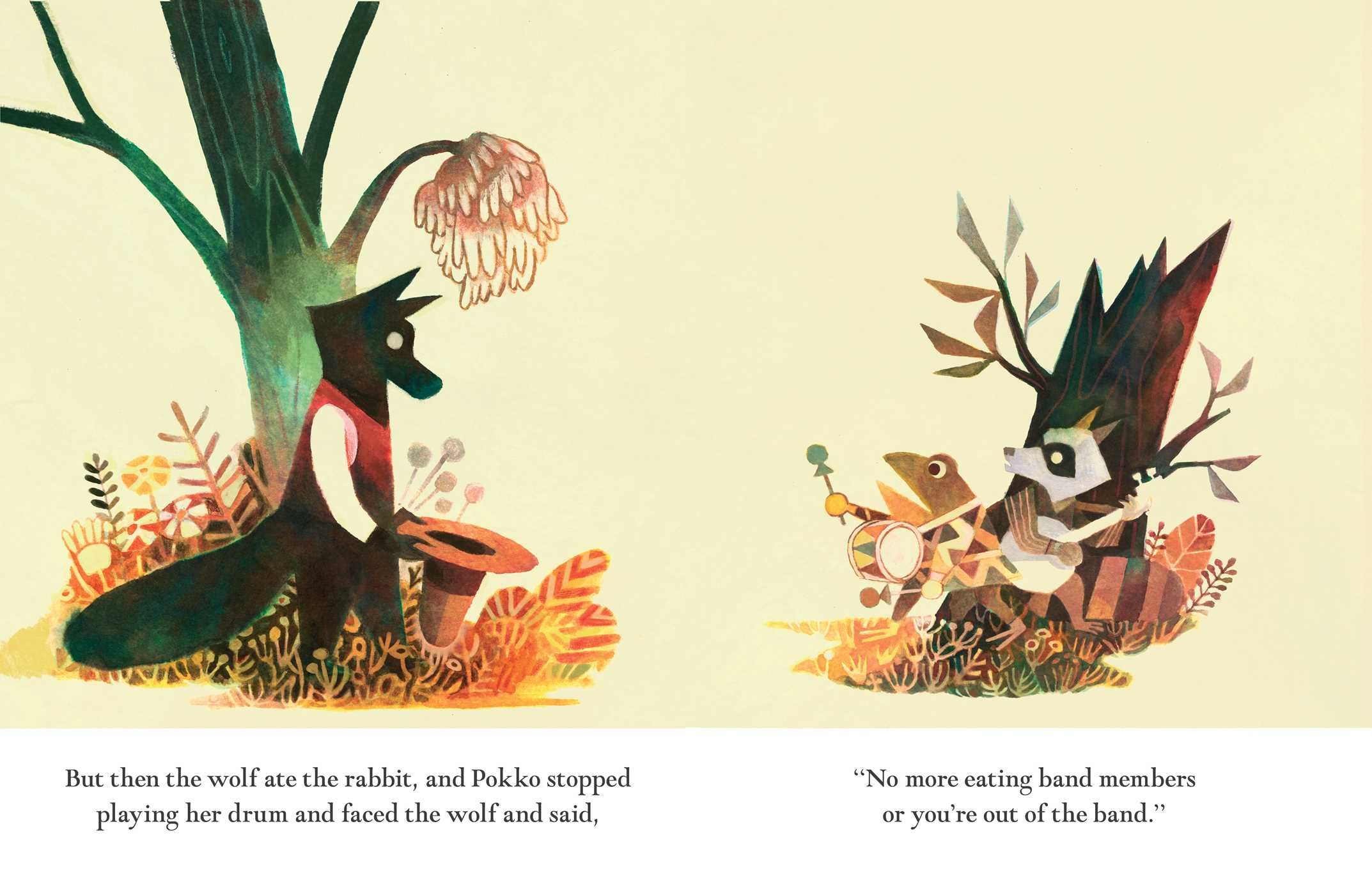 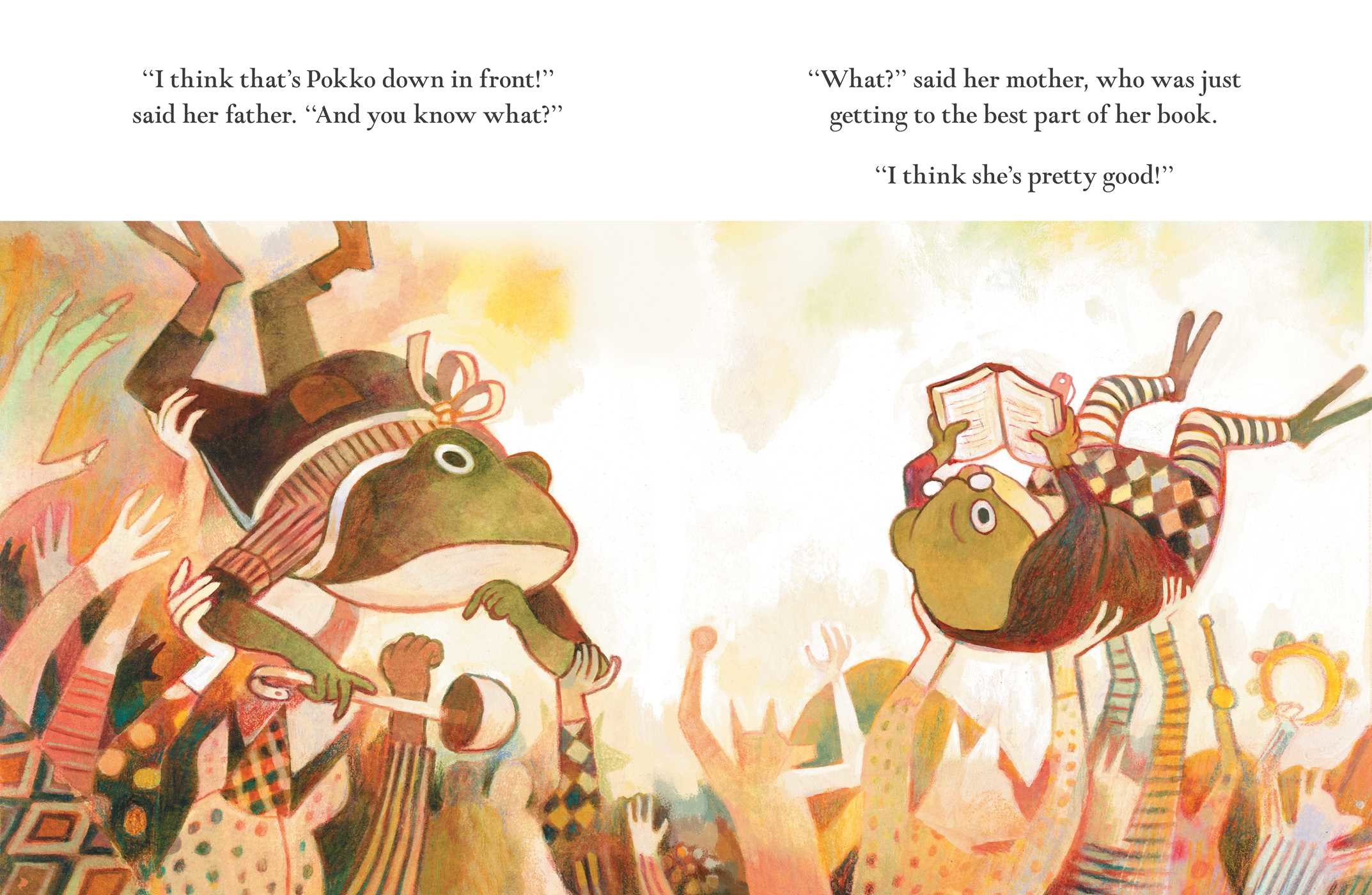 From E.B. White Read Aloud honor artist Matthew Forsythe comes a picture book about a magical drum, an emerald forest, and the little frog who dares to make her own music.

The biggest mistake Pokko’s parents ever made was giving her the drum. When Pokko takes the drum deep into the forest it is so quiet, so very quiet that Pokko decides to play. And before she knows it she is joined by a band of animals —first the raccoon, then the rabbit, then the wolf—and soon the entire forest is following her. Will Pokko hear her father’s voice when he calls her home?

Pokko and the Drum is a story about art, persistence, and a family of frogs living in a mushroom. 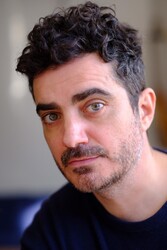 Matthew Forsythe is the author-illustrator of Pokko and the Drum, a Publishers Weekly Best Book of the Year, a recipient of the Boston Globe–Horn Book Award Honor, and a Charlotte Zolotow Honor Book. He is also an illustrator for animated films and television. His credits include Adventure Time, The Midnight Gospel, and Robin Robin, a stop-motion animated musical from Aardman Animations and Netflix. Visit him at ComingUpforAir.net.

Matthew Forsythe is the author-illustrator of Pokko and the Drum, a Publishers Weekly Best Book of the Year, a recipient of the Boston Globe–Horn Book Award Honor, and a Charlotte Zolotow Honor Book. He is also an illustrator for animated films and television. His credits include Adventure Time, The Midnight Gospel, and Robin Robin, a stop-motion animated musical from Aardman Animations and Netflix. Visit him at ComingUpforAir.net.

Pokko's parents give her a drum—biggest mistake ever—and she makes a thoroughgoing racket.Her father suggests taking her drum outside. "But don't make too much noise. We're just a little frog family that lives in a mushroom, and we don't like drawing attention to ourselves." Pokko sets off quietly into the too-quiet forest. She taps her drum "just to keep herself company." When a banjo-playing raccoon follows her, she plays louder. A trumpet-playing rabbit's next, then a wolf, ostensibly there for the music. In a plot twist evocative of Jon Klassen, the wolf eats the rabbit, earning Pokko's stern rebuke: "No more eating band members or you're out of the band." Soon, many animals—some making music, others enjoying it—are following Pokko. When her father calls her to dinner, he hears faint music, growing louder. The crowds sweep in, carrying off Pokko's parents. (Comically, her mother's still engrossed in the book she's been reading throughout.) Her father thinks he spies Pokko down in front. "And you know what?…I think she's pretty good!" Pokko's a self-possessed marvel, brave enough to walk alone, face down a wolf, and lead a band. Forsythe's smudgily glowing paintings alternate Rousseau-esque forest forms with cozy interiors; stripes and harlequin diamonds decorate clothing.Celebrating both community and individuality, this droll, funny offering will tickle kids and adults alike. (Picture book. 4-8)

“The biggest mistake Pokko’s parents ever made was giving her a drum,” begins this dark, hilarious tale by Forsythe (The Brilliant Deep). As Pokko marches across the colorful bed the frog family shares, her sticks poised for big blows, her father expresses deep misgivings. The next day, he prevails upon her to head outside—“We’re just a little frog family that lives in a mushroom, and we don’t like drawing attention to ourselves”— and she does, venturing into the surrounding woods alone. After Pokko resists the forest’s silence, “tapping on her drum,” a banjo-playing raccoon falls in behind her; as Pokko plays louder, a rabbit with a trumpet appears. An eager wolf joins, too, with less-than-musical results (“No more eating band members or you’re out of the band,” Pokko orders). As the drummer plays, the parade grows, and pretty soon, it’s a throng, joined even by her noise-averse dad. Forsythe’s tapestrylike spreads give the tense, funny sequences a lush elegance marked by amusing visual asides, painterly interiors, and a triumphant parade. In embracing one’s own beat, Pokko discovers, extraordinary things can happen—surprising things, upsetting things, and glorious things, too. Ages 4–8. Agent: Judith Hansen, Hansen Literary. (Oct.)

The frog family lives a quiet, out-of-the-way existence in a peaceful forest—peaceful, that is, until they
present their daughter, Pokko, with a drum. It’s a big mistake, they realize—even bigger than their
previous gifts of a slingshot and llama. “We don’t like drawing attention to ourselves,” her father says, and
Pokko agrees to take her drum-banging out into the woods, giving her patient parents some peace. As she walks about, drumming, different forest critters join her, their own instruments in tow, and form aboisterous musical parade. In one dicey moment, a wolf joins the throng. “No more eating band members or you’re out of the band,” Pokko admonishes the apologetic predator. The joyful cacophony resumes, eventually convincing even her quiet parents that perhaps the drum wasn’t such a mistake after all. Forsythe’s coy, playful writing is a wonder on its own, but the lush watercolor, gouache, and coloredpencil illustrations beautifully elevate the tale, creating a warm and wonderful world that any woodland creature (or small child) would long to inhabit. There is something inspirational about Pokko’s determined drumming and steadfast leadership, subtly providing a delightful lesson on the importance of—quite literally—marching to the beat of your own drum. Sometimes making noise is the only way to be heard.