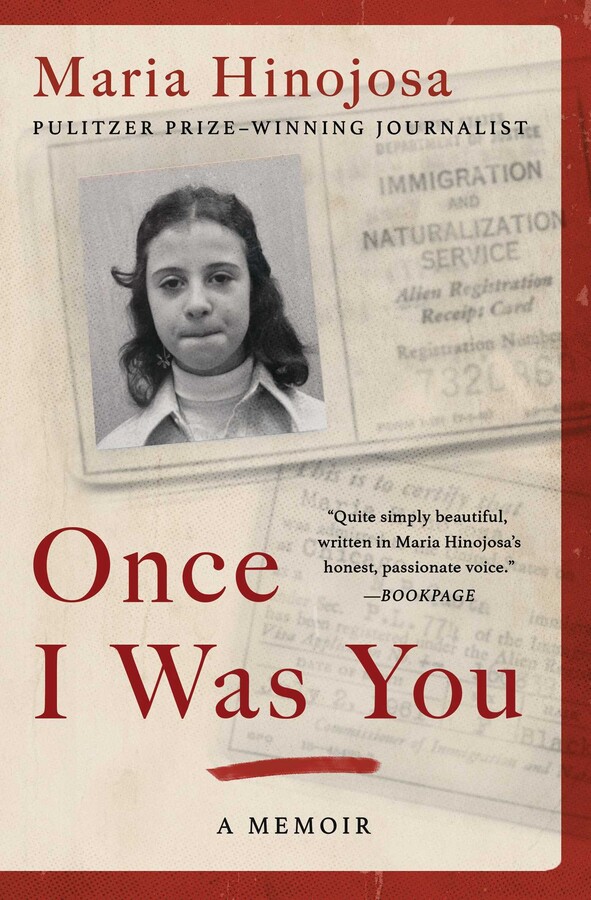 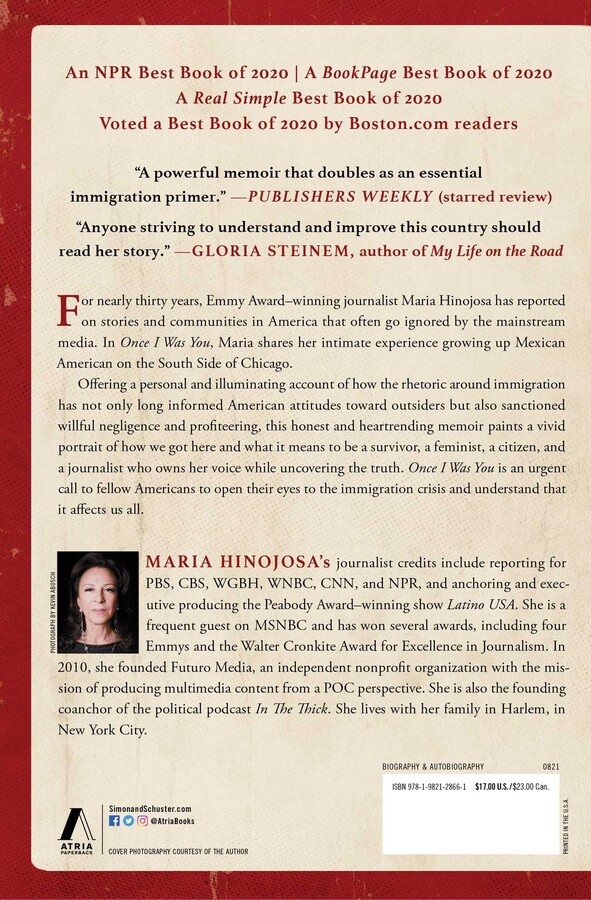 Once I Was You

By Maria Hinojosa
LIST PRICE $17.00
PRICE MAY VARY BY RETAILER

“Anyone striving to understand and improve this country should read her story.” —Gloria Steinem, author of My Life on the Road

The Emmy Award–winning journalist and anchor of NPR’s Latino USA tells the story of immigration in America through her family’s experiences and decades of reporting, painting an unflinching portrait of a country in crisis in this memoir that is “quite simply beautiful, written in Maria Hinojosa’s honest, passionate voice” (BookPage).

Maria Hinojosa is an award-winning journalist who, for nearly thirty years, has reported on stories and communities in America that often go ignored by the mainstream media—from tales of hope in the South Bronx to the unseen victims of the War on Terror and the first detention camps in the US. Bestselling author Julia Álvarez has called her “one of the most important, respected, and beloved cultural leaders in the Latinx community.”

In Once I Was You, Maria shares her intimate experience growing up Mexican American on the South Side of Chicago. She offers a personal and illuminating account of how the rhetoric around immigration has not only long informed American attitudes toward outsiders, but also sanctioned willful negligence and profiteering at the expense of our country’s most vulnerable populations—charging us with the broken system we have today.

An urgent call to fellow Americans to open their eyes to the immigration crisis and understand that it affects us all, this honest and heartrending memoir paints a vivid portrait of how we got here and what it means to be a survivor, a feminist, a citizen, and a journalist who owns her voice while striving for the truth. 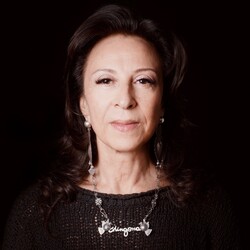 Maria Hinojosa’s nearly thirty-year career as a journalist includes reporting for PBS, CBS, WGBH, WNBC, CNN, NPR, and anchoring and executive producing the Peabody Award–winning show Latino USA, distributed by NPR. She is a frequent guest on MSNBC, and has won several awards, including four Emmys, the Studs Terkel Community Media Award, two Robert F. Kennedy Awards, and the Edward R. Murrow Award from the Overseas Press Club. In 2010, she founded Futuro Media, an independent nonprofit organization with the mission of producing multimedia content from a POC perspective. Through the breadth of her work and as the founding coanchor of the political podcast In the Thick, Hinojosa has informed millions about the changing cultural and political landscape in America and abroad. She lives with her family in Harlem in New York City.

“A powerful memoir that doubles as an essential immigration primer.”

“Written in Latina journalist Maria Hinojosa’s honest, passionate voice, Once I Was You is, quite simply, beautiful.”

“Award-winning journalist Hinojosa narrates her turbulent life story as a marginalized woman with allegiance to two countries [in this] far-ranging and politically illuminating memoir [that] is also laser-focused and intimate . . . A fascinating and essential journalist's memoir.”

“Once I Was You is many books in one, a searingly honest memoir by one of this country’s most accomplished women, an inside view of the media, and a fact-filled indictment of our treatment of immigrants over time. Because Maria Hinojosa identifies with each one, anyone striving to understand and improve this country should read her story of what’s wrong and how to change it.”

– Gloria Steinem, author of My Life on the Road

“In these times of love and hate, Maria Hinojosa’s astonishing story is medicine, healing, illumination. She swallows fear as if she were a circus performer swallowing fire. She encourages, inspires, and challenges us to find our own courage. Once I Was You is a dazzling gift she has bestowed upon us and America.”

– Sandra Cisneros, author of The House on Mango Street

“Maria Hinojosa is hands down one of the most important, respected, and beloved cultural leaders in the Latinx community. . . . Hers is a voice we need to hear at this moment in our country!”

– Julia Alvarez, author of How the García Girls Lost Their Accents

“I’ve known and admired Maria for many years. She is truly an outstanding journalist. I loved reading Once I Was You: A Memoir of Love and Hate in a Torn America. It was so personal and moving, and told a very timely and critically important story for all Americans. I learned a lot about Maria, but more importantly, I learned a lot about what’s going on in so many parts of our country. Thanks, Maria, for writing this powerful book.”

“Maria’s perspective is powerful and vital. Years ago, when In the Heights was just starting off-Broadway, Maria got the word out to our community to support this new musical about our neighborhoods. She has been a champion of our triumphs, a critic of our detractors, and a driving force to right the wrongs our society faces. When Maria speaks, I’m ready to listen and learn.”

“Maria Hinojosa writes about her life, her family, and her immigrant story in ways that will inspire you and break your heart—because that is what the immigration story is in America: part inspiration, hope, and triumph; part rejection, struggle, and heartbreak. Maria’s voice rings loud and clear, and her battle cry for America’s immigrants of color is both poignant and necessary.”

“Maria Hinojosa is a national treasure. I always know I can trust her in her reporting. Here, as an author, she steps forward with her usual clarity and a new surge of power to tell us a deeply needed narrative about ourselves.”

“As a POC journalist, feminist, survivor of sexual assault, and truth-teller, Maria Hinojosa is tough as nails. This expressive and captivating book not only reveals how she has fought to tell stories that are so often silenced by the mainstream media, but also lays bare the deep fissures in our politics and our society. Once I Was You is essential reading for anyone who wants America to do better.”

“I loved this heart wrenching, yet ultimately hopeful, book. Maria Hinojosa’s Once I Was You puts you in the shoes of frightened immigrant children while laying out a path from fear to success. A guide to joy and empowerment—even in the hard-knock business of journalism—this story is a must-read for anyone who ever wondered how an immigrant could possibly love an America that has always undervalued newcomers.”

“With frankness, brilliance, and a generous heart, Hinojosa blends intimate experience and professional tales to correct the American story—or, as she puts it, to ‘deconstruct this bullshit.’ A consummate truth-teller, Hinojosa spares neither political side in doing so. Once I Was You, deeply researched and poetically told, will inspire you to create a better world.”

“Maria Hinojosa is a renowned journalist whose observational skills are legendary and on full display in this compelling work. But it’s her committed, compassionate, truth-seeking heart that makes this book so timely, necessary, and urgent.”

“I loved the book, it is historical, entertaining, educational, instructive, heroic, honest and courageously brave. It’s a must read for anyone especially in this critical time in our country as we try to make sense of how the divisions in our country came to be, but also how to overcome them. The media has such an impact on our lives, to get an inside look at how it is rendered especially now when we are so dependent on the media.”

“Once I Was You throws down, proving that Maria Hinojosa is beyond bad assery: esta mujer es una chingona to be reckoned with. In warm, journalistic prose, Hinojosa unfurls a map of una vida extraordinaria that shows her developing, nurturing, and sustaining a career best described as iconoclastic. Her skills as a writer and reporter enable her to trace the ugly contours of US racial politics as she simultaneously narrates a compulsively readable autobiography.”

“Maria Hinojosa has assembled a full arsenal of facts, stats, and deeply complex histories to weaponize a revolution of justice in this country. The courage of Hinojosa’s reportage resides not only in her ability to enter the ground zero of a conflict, but to also turn the lens on herself.”

– Cherríe Moraga, coeditor of The Bridge Called My Back

“Hinojosa is a fearless pugilist for truth, fighting to bring light to our nation’s hidden corners. Her stories are full of humanity, clarion calls for justice. She brings a journalist’s diligence and a feminist grace to her audience and subjects.”

"The Latino USA anchor’s own story radiates with an optimism that is nonetheless tempered with the reality of decades spent reporting on inhumane, Kafka-eseque immigration policies. Once I Was You is packed with information about borders and the rise of xenophobia in the U.S., making it an informative read. But the memoir also acts as a lifeline to anyone feeling adrift or unwelcome in the so-called melting pot."

Once I Was You

By Maria Hinojosa
LIST PRICE $17.00
PRICE MAY VARY BY RETAILER