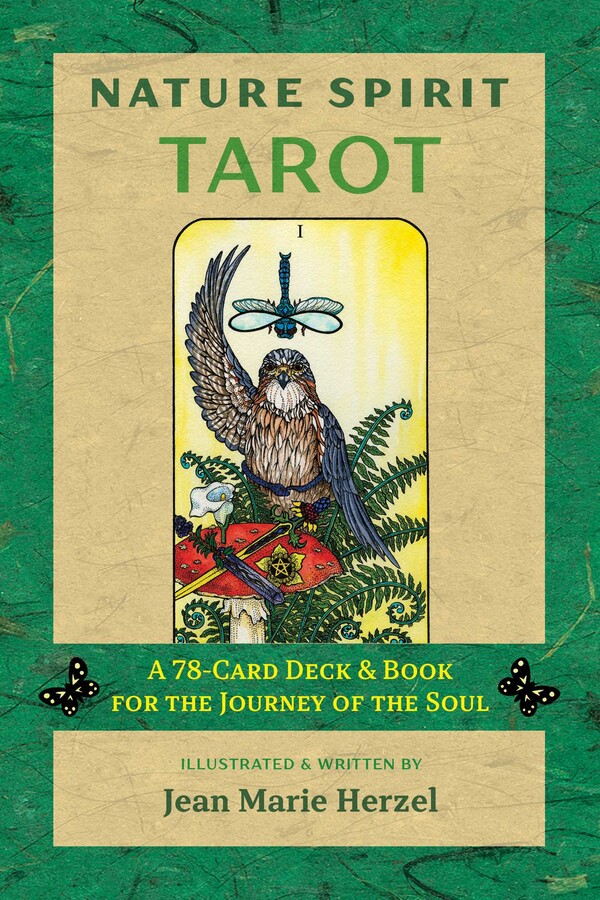 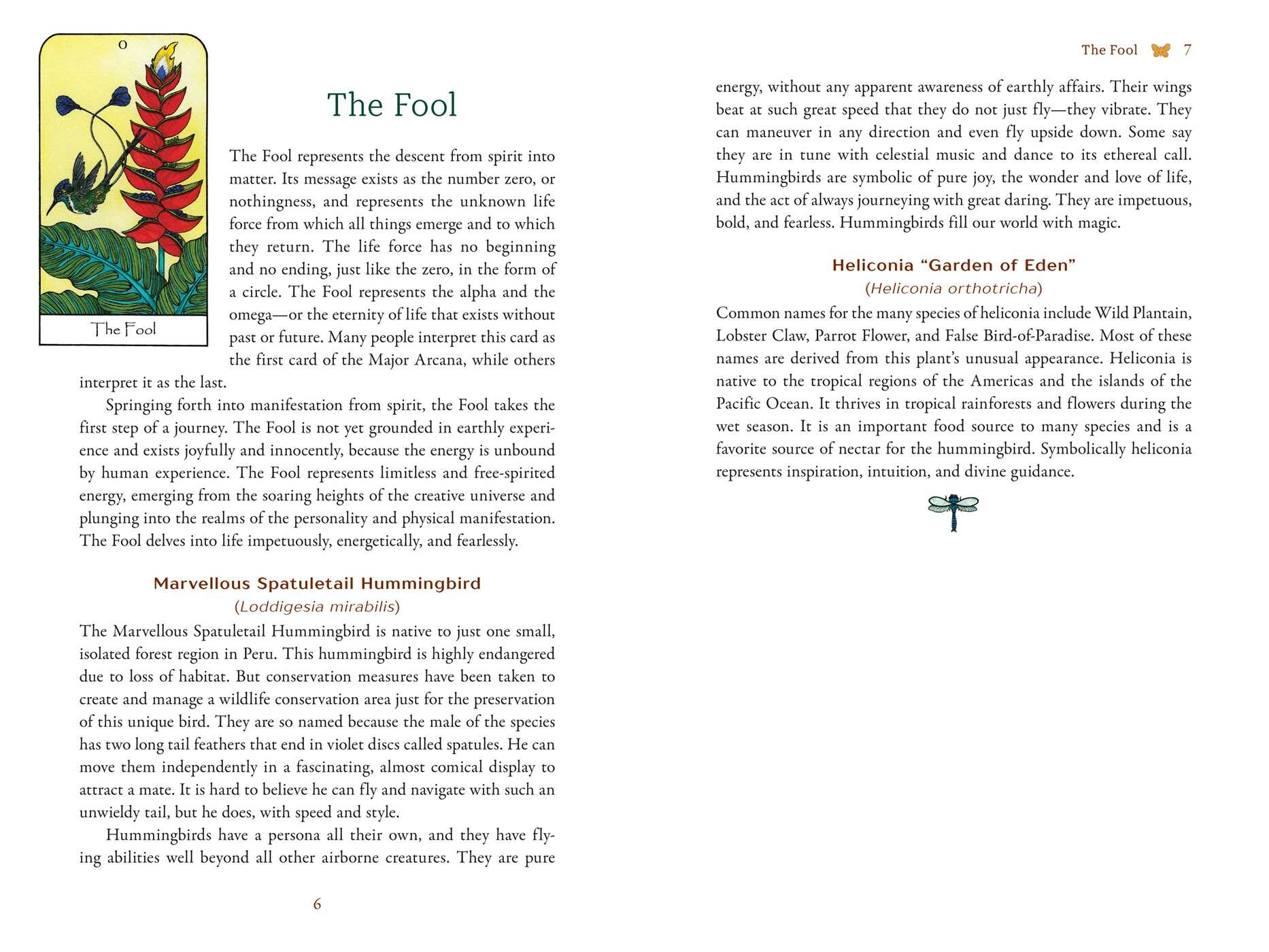 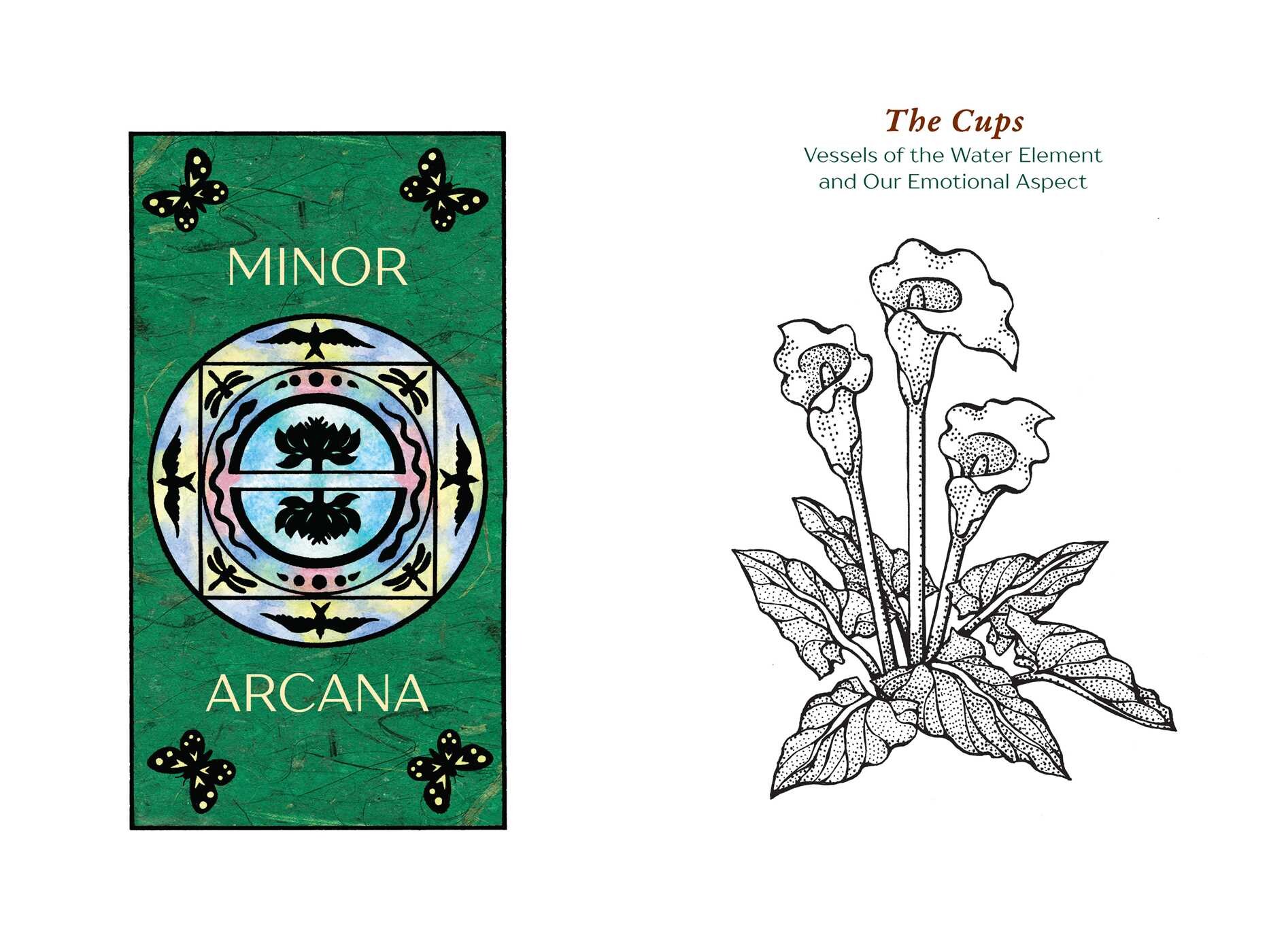 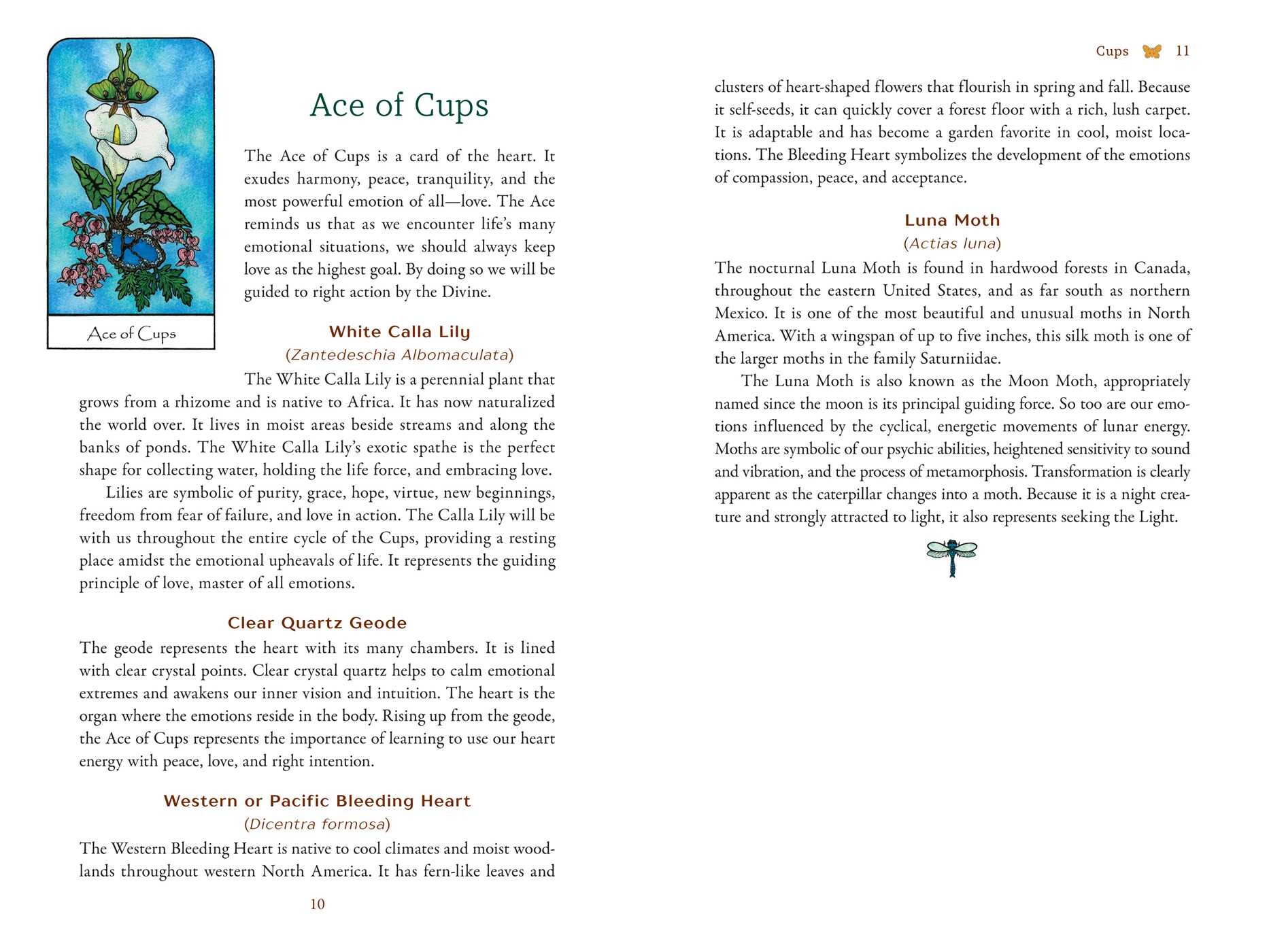 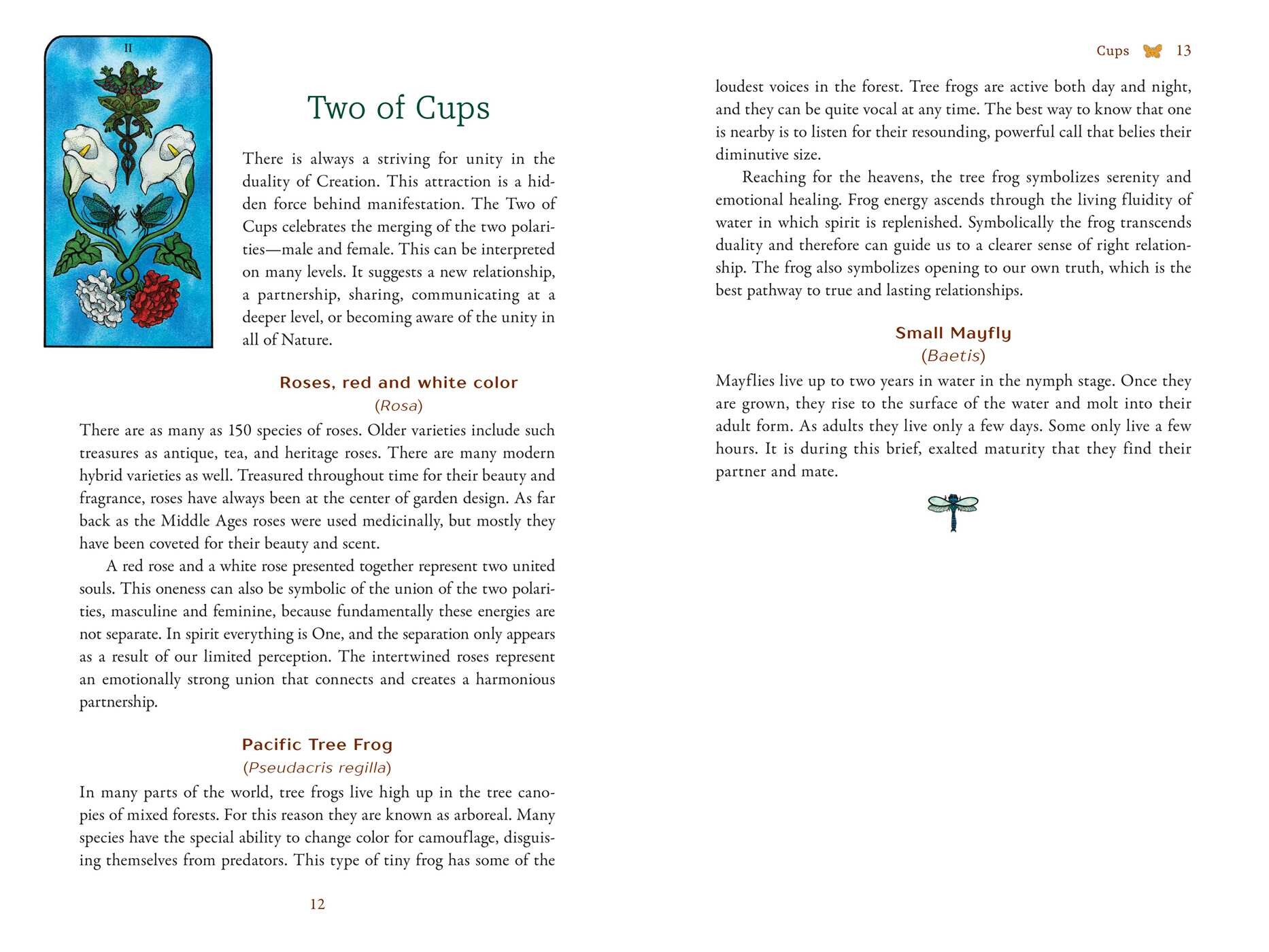 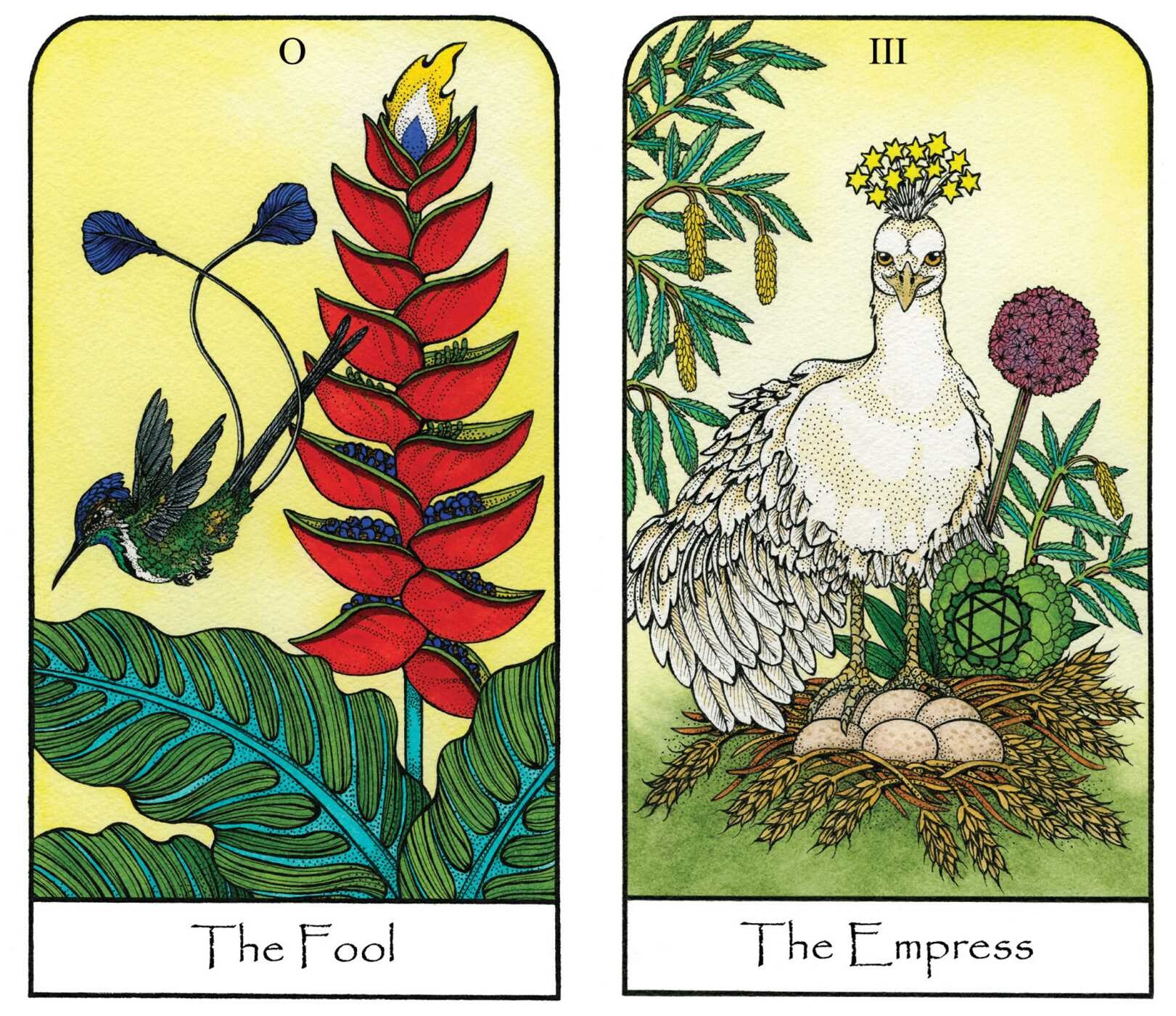 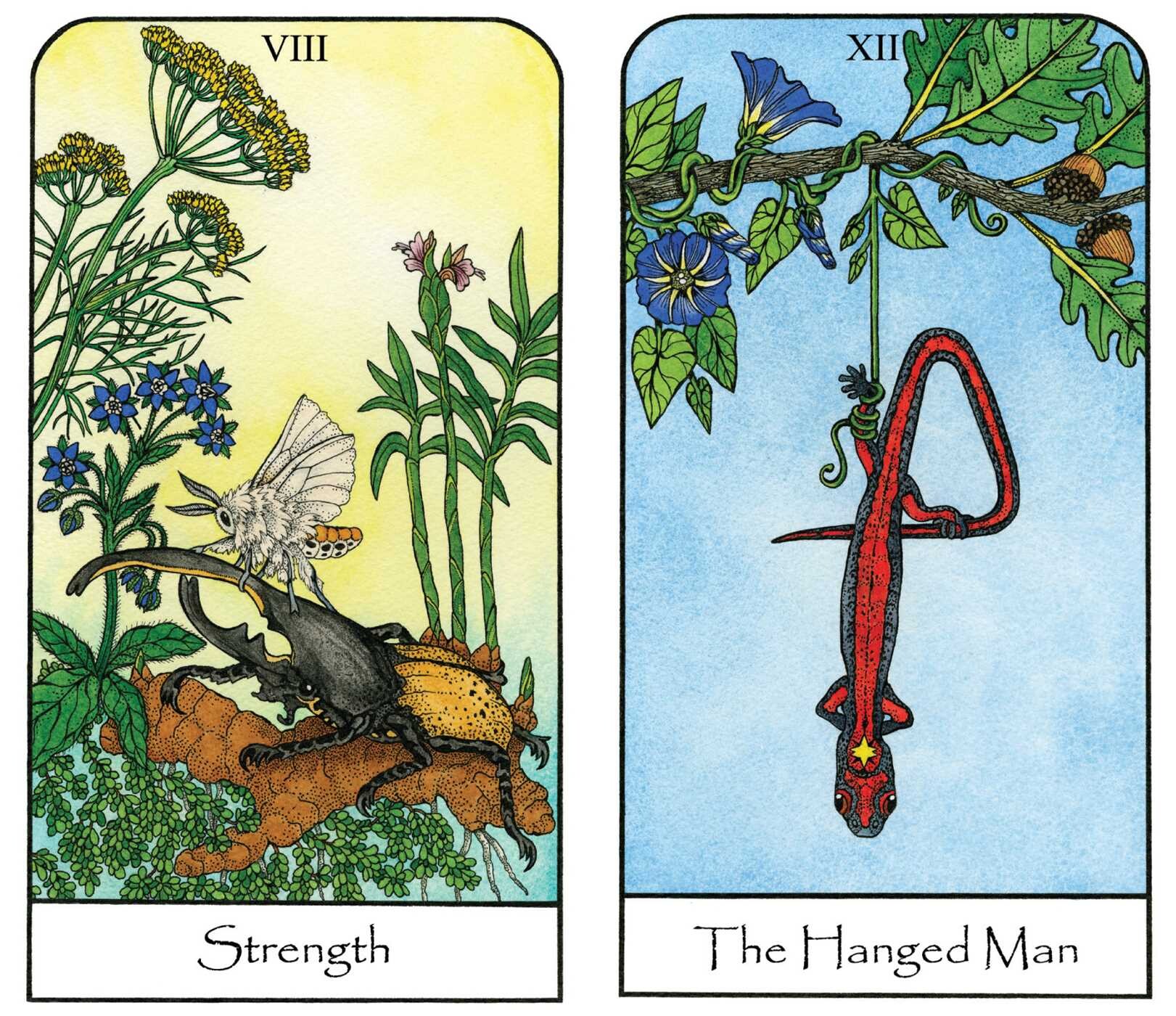 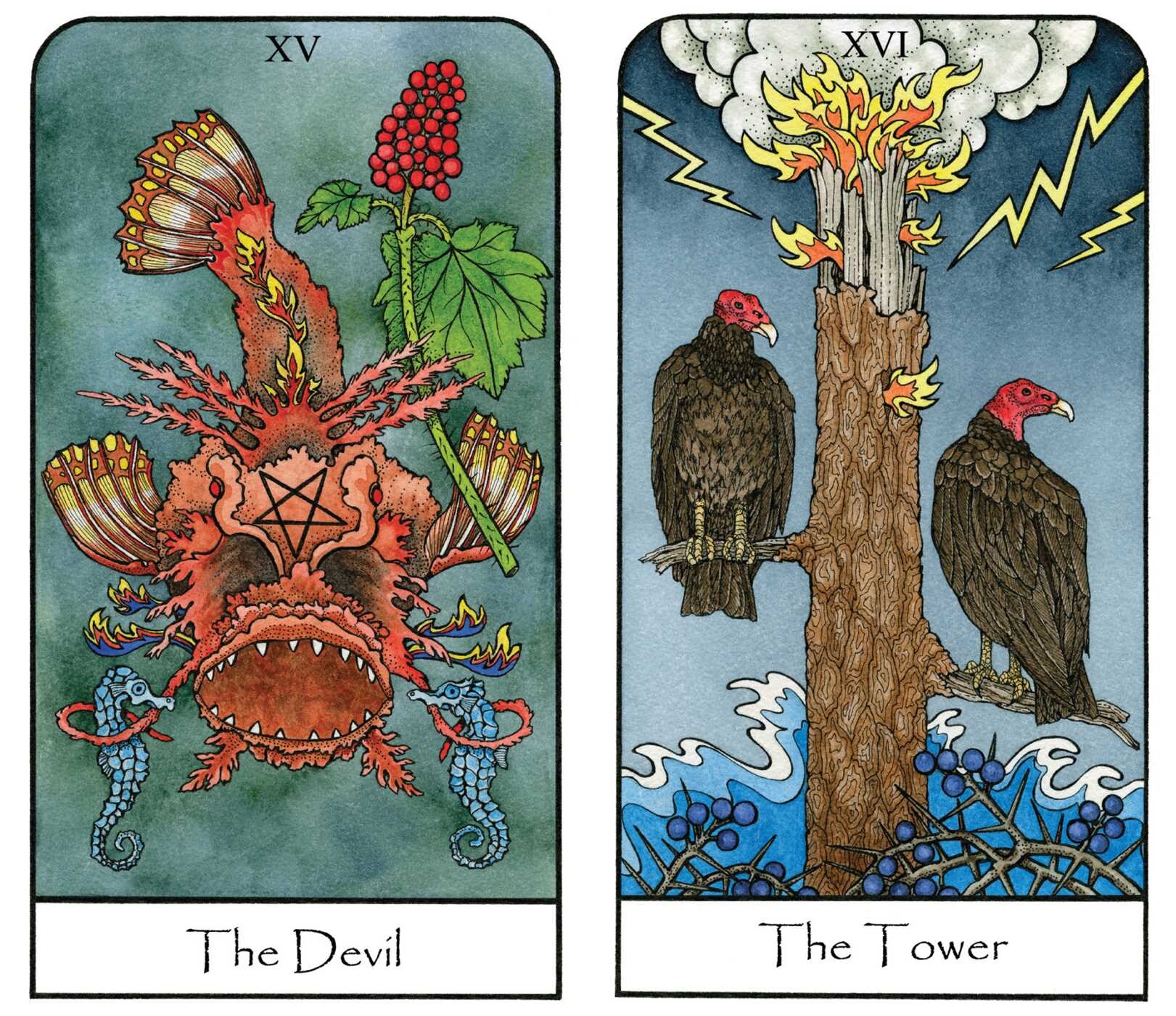 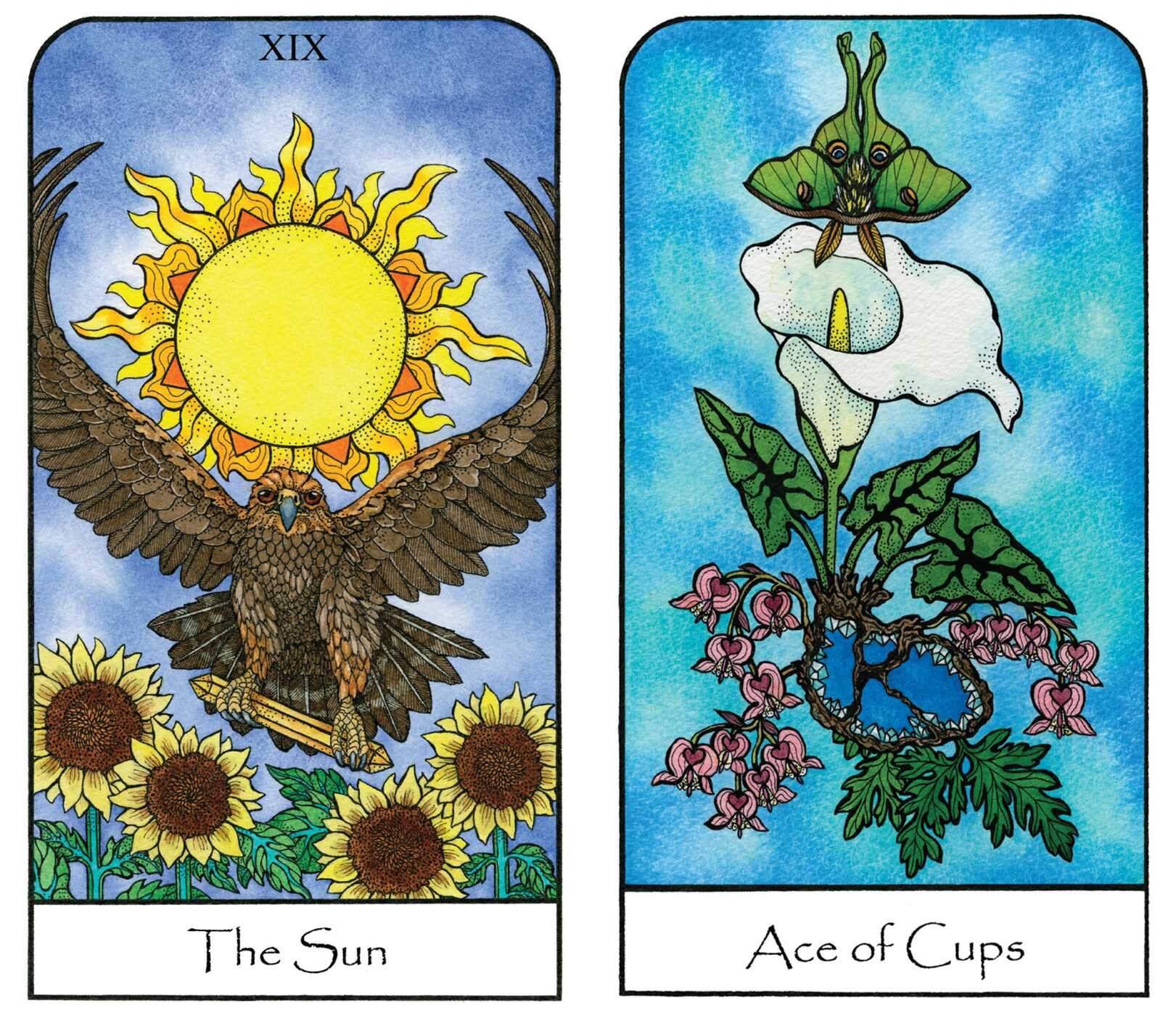 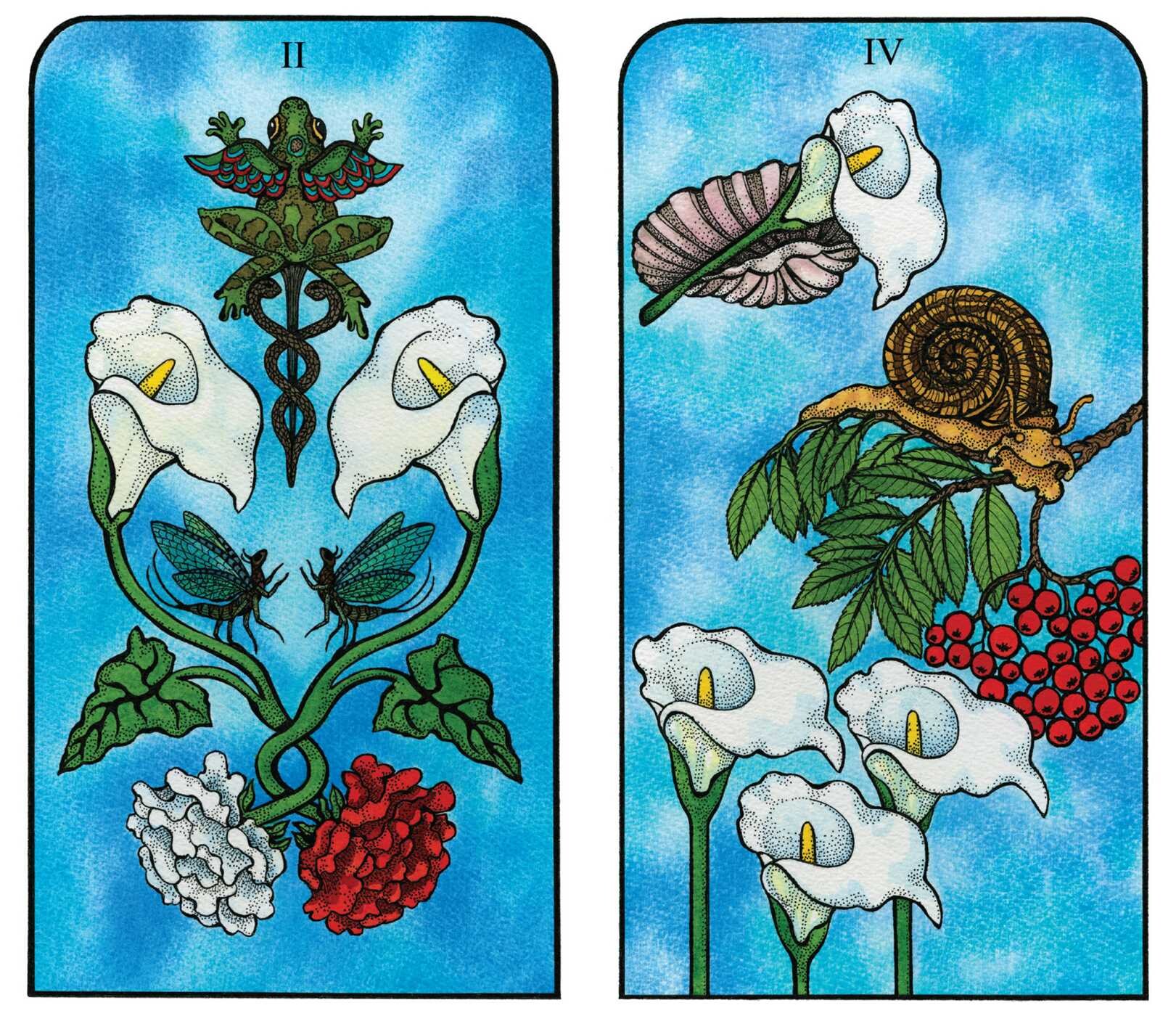 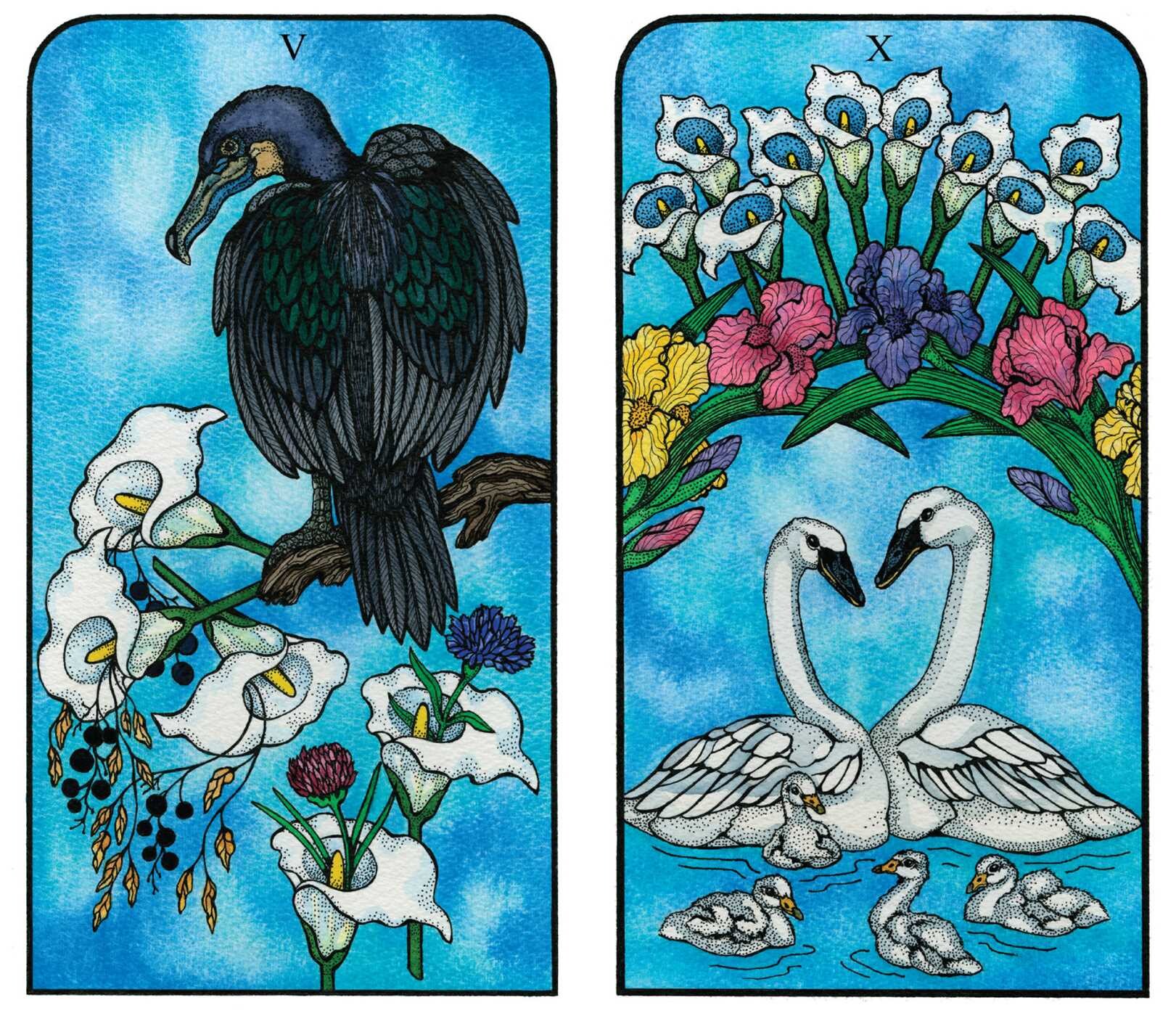 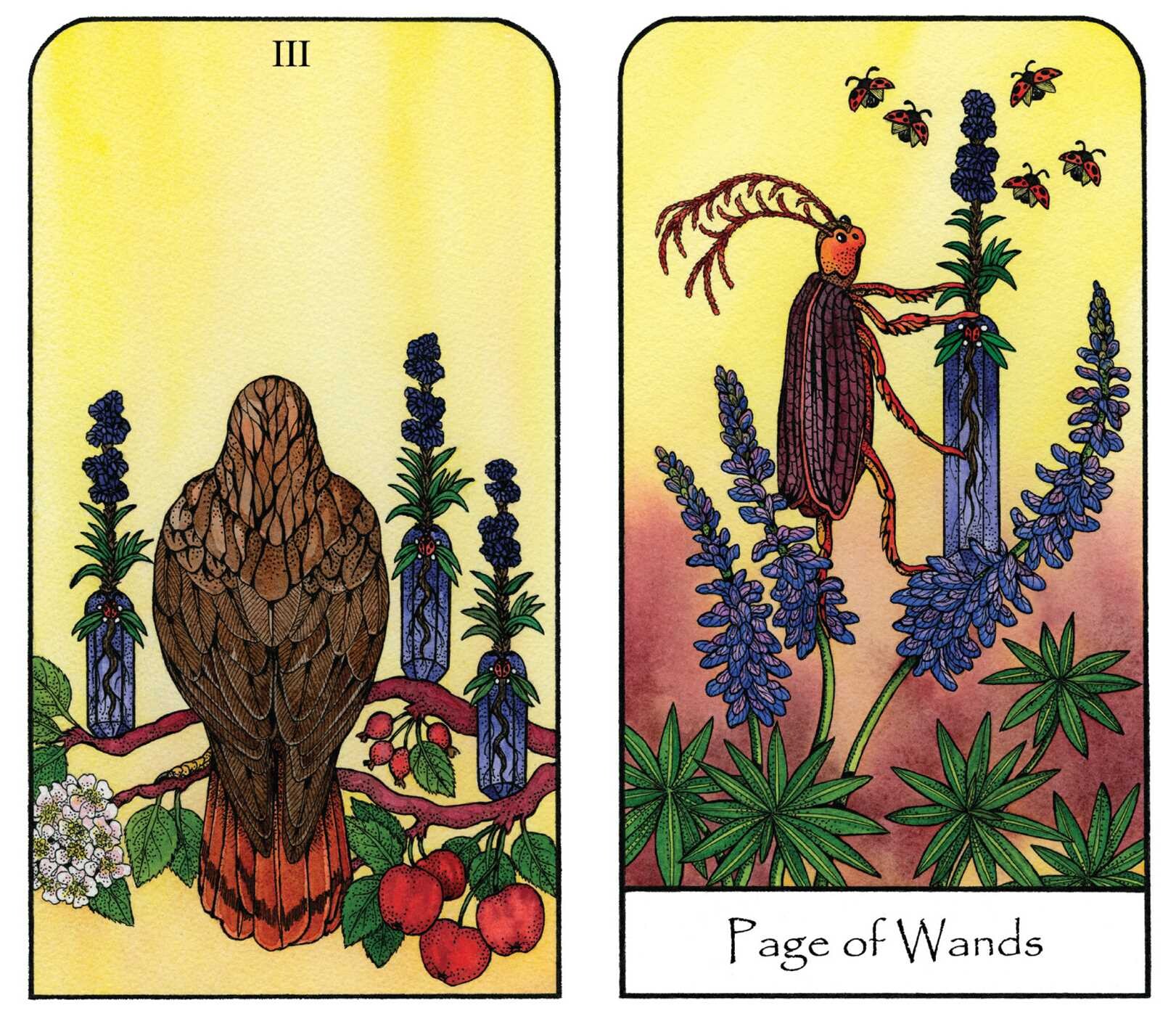 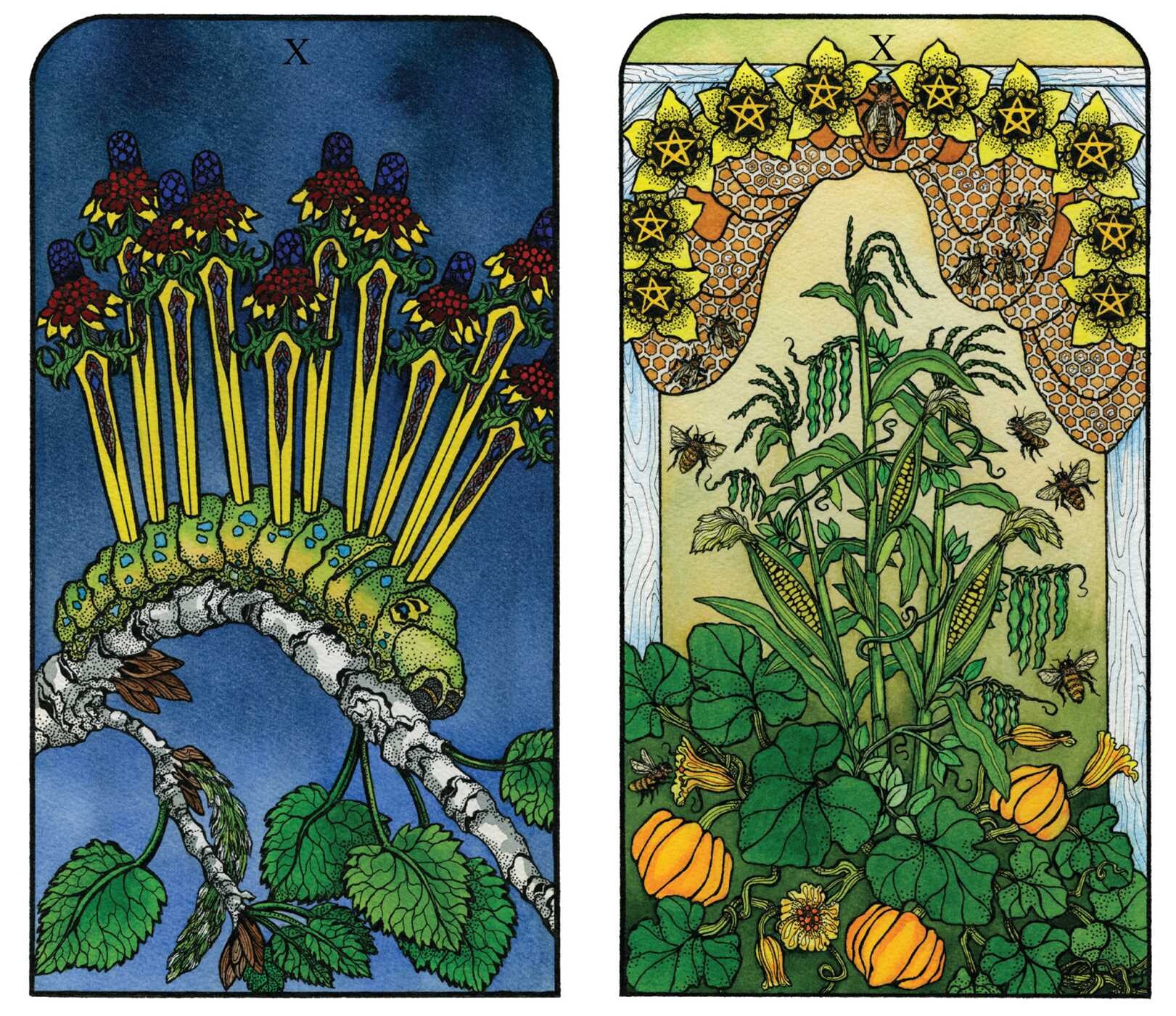 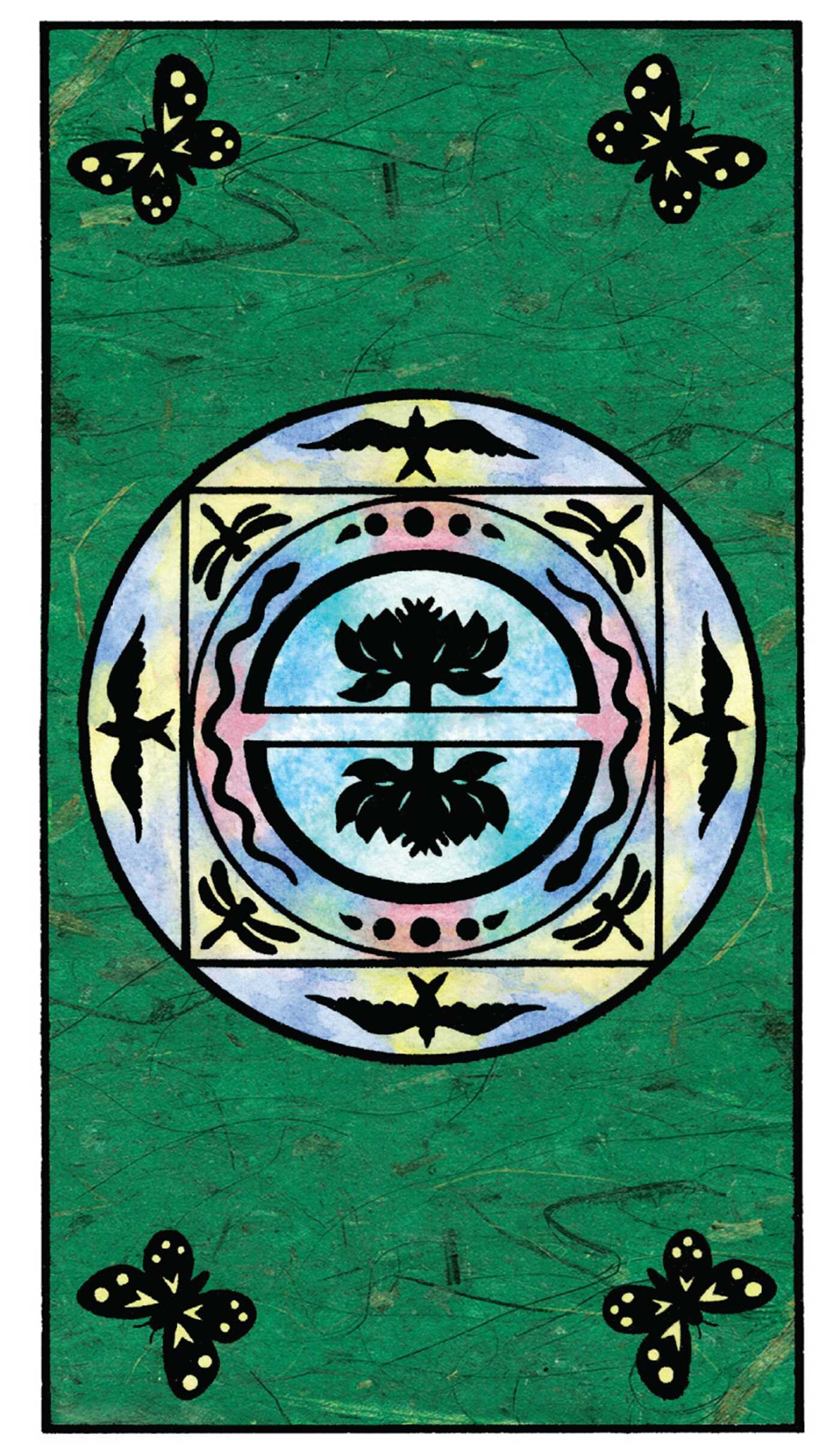 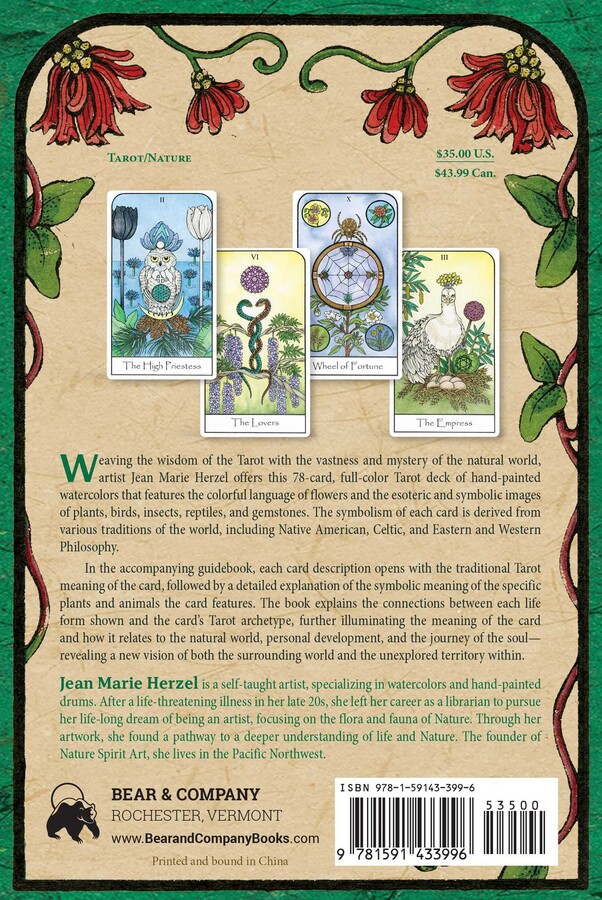 • Includes the complete Major and Minor Arcana of the Tarot interpreted through symbolic images of plants, birds, insects, reptiles, and gemstones

• Based on extensive research into the esoteric meaning of the Tarot and the symbolism of various traditions of the world, including Native American, Celtic, and Eastern and Western philosophy

Weaving the wisdom of the Tarot with the vastness and mystery of the natural world, this 78-card, full-color deck by artist Jean Marie Herzel offers the complete Major and Minor Arcana interpreted through the lens of Nature and the infinite diversity of forms that consciousness displays on our home, the Earth.

Drawn to the timeless and enduring messages of the Tarot and its ability to help us explore the depths of the psyche, Herzel carefully researched the inner esoteric meaning of each card and then artfully interpreted that meaning in hand-painted watercolors featuring the colorful language of flowers and symbolic images of plants, birds, insects, reptiles, and gemstones. The symbolism of each card is derived from various traditions of the world, including Native American, Celtic, and Eastern and Western Philosophy.

In the accompanying guidebook, each card is given a two-page description that opens with the traditional Tarot meaning of the card, followed by a detailed explanation of the symbolic meaning of the specific plants and animals the card features. For example, on the cover, the Magician card shows a Merlin Falcon, Amanita Muscaria mushroom, Western Sword Fern, and the Eastern Pondhawk Dragonfly--each of these life forms was chosen because it represents one or more aspects of the Magician’s meaning in the Tarot. The book explains the connections between each form shown and the card’s Tarot archetype, further illuminating the meaning of the card and how it relates to the natural world, personal development, and the journey of the soul.

Revealing a new vision of both the surrounding world and the unexplored territory within, the Nature Spirit Tarot offers a tool to deepen our connection to Nature, develop personal awareness, and awaken an understanding of the psychological and spiritual elements at play in our lives.

The Nature Spirit Tarot deepens our connection to the natural world, and at the same time, inspires us in our quest to develop personal awareness. As we go about our busy lives, nature’s beauty and mystery remain unnoticed by many of us. Sadly, we often live in places somewhat removed from the natural world. To bring us back to nature, I created this deck using the language of flowers and the symbolic meanings of birds, insects, and reptiles, as well as the meanings of some gemstones. The symbolism is derived from various traditions of the world, including Native American, Celtic, and Eastern and Western Philosophy, to name only a few.

The Nature Spirit Tarot was many years in the making. The idea to embark upon such a large project arose many years ago. I felt an inner desire to explore the Tarot intensely, and began delving into its meanings. The enduring quality of the Tarot, and the power that lives in it, was very intriguing. It seemed to me it was a living legacy, a message of the journey into consciousness left behind by those who traveled this road before us. This is how the project began.

Immediately, I learned that Tarot is a timeless tool. It enables us to explore the depths of our psyche and our conscious awareness. It has been with humanity for many centuries. I was pleased to learn that it is now enjoyed everywhere in its deeper interpretations. People realize that the Tarot contains keys to the depths of our intellect, our emotions, our physicality, and our spirit. The Tarot reveals its message in layers, and the depth to which we explore it is limited only by our own motivation to do so. Working with this inner path of exploration, I have not included any reversed meanings in the descriptions.

Many people wanted to know about the flora and fauna that appear in the Nature Spirit Tarot. The companion book is a guide to facts and symbolic meanings for those who wish to explore the natural world more intimately. Much of the text is an interpretation of the cards through the symbolism of nature. I hope this approach will be inspiring and refreshing, and an important aspect of your own journey of self-discovery.

My greatest wish is that as you use these cards, you will enjoy the colorful imagery, learn something special about nature, and deepen your own personal path. May this adventure bring you closer to the realization of the Oneness of all Life on this magnificent planet.

The Magician (card shown on cover)

The Magician is a conscious instrument of the life force. The uplifted wing channels the energy from the heavens, and the wing pointed downward brings that energy into manifestation. The Magician is the keeper of heavenly power. A highly developed mind and great powers of concentration give the Magician perfect control of the four elements and any situation in the earthly realm. In the foreground of the card, four tools rest atop the mushroom, representing mastery of the elemental forces.

The Magician understands the sacred wisdom that is eternal. Through inner guidance and with great mental power and integrity, the Magician channels the Divine. The dynamic energy presented by the Magician enables us to raise our motivations to serve a higher purpose and focus our will toward harmony and grace. The Magician also exemplifies the higher path, encouraging us to deepen our sacred connection so that we may be of service to the world. The Magician reminds us that we have many latent skills and abilities just waiting to unfold from within.

The Merlin Falcon is native to the northern continents encircling the planet. It is a small falcon with powerful flying abilities. The Merlin has been raised for falconry since the Middle Ages, prized for its great speed and agility. It is rare to see this falcon in nature because it is fast, silent, and discreet. But it is seen occasionally in habitats that include open forests, grasslands, and coastlines.

The Merlin moves swiftly with exact precision and control. The falcon is symbolic of insight, clear vision, and unity with higher powers. The Merlin explores its world with mental clarity and a special ability to move between the seen and unseen worlds. This bird of action inspires us to hone our mental powers and understand our minds as creative tools to channel the divine forces.

Mushrooms are considered symbols of good fortune and longevity. But this is no ordinary mushroom. Fly Agaric Mushrooms was considered a sacred tool by ancient shamans and may be one of the oldest hallucinogenic ceremonial tools known to humanity. Used in sacred rituals, it allowed healers to expand their minds and perceive deep mysteries for the improved welfare of individuals, as well as the entire tribe.

The Western Sword Fern inhabits deep conifer forests of western North America. To thrive, it requires moist stream banks and shady nooks where conditions are always damp and cool. The fern is a symbol of prophetic dreaming, magical powers, and riches. It also represents confidence, protection, dignity, and peace. The spiraling, unfurling fronds of the fern, like all spirals, suggest the sacred spiral of life with its complexities and infinite possibilities.

The Eastern Pondhawk Dragonfly dwells primarily around quiet ponds and boggy marshes. It is native to the eastern regions of North America. The iridescent wings of the dragonfly refract light and emanate multiple colors, associating it with the power of light, magic, and mysticism. In this card, the wings of the dragonfly form an infinity symbol. This represents eternality, unlimited possibilities, strength, and dominion over the world of manifested form. The dragonfly reminds us to let go of illusion, awaken to our inner vision, and gain power through our deepest aspirations.
Jean Marie Herzel

Jean Marie Herzel is a self-taught artist, specializing in watercolors and hand-painted drums. After a life-threatening illness in her late 20s, she left her career as a librarian to pursue her life-long dream of being an artist, focusing on the flora and fauna of Nature. Through her artwork, she found a pathway to a deeper understanding of life and Nature. The founder of Nature Spirit Art, she lives in the Pacific Northwest.

“The Nature Spirit Tarot deck is sweet as well as profound. The author, who is also the artist, studied the tarot accessing the inner esoteric meanings of the cards. She then translated the meanings to handprinted watercolors. Using the images of flowers, plants, birds, insects, reptiles, and gemstones, she draws from various traditions such as Native American, Celtic, Eastern and Western philosophy.”

"Working with this deck is a pleasure. It is truly a treasure that comes from the heart of the creator. It connects deeply with the reader, and every time I handle this deck, it takes me back to my rural roots."