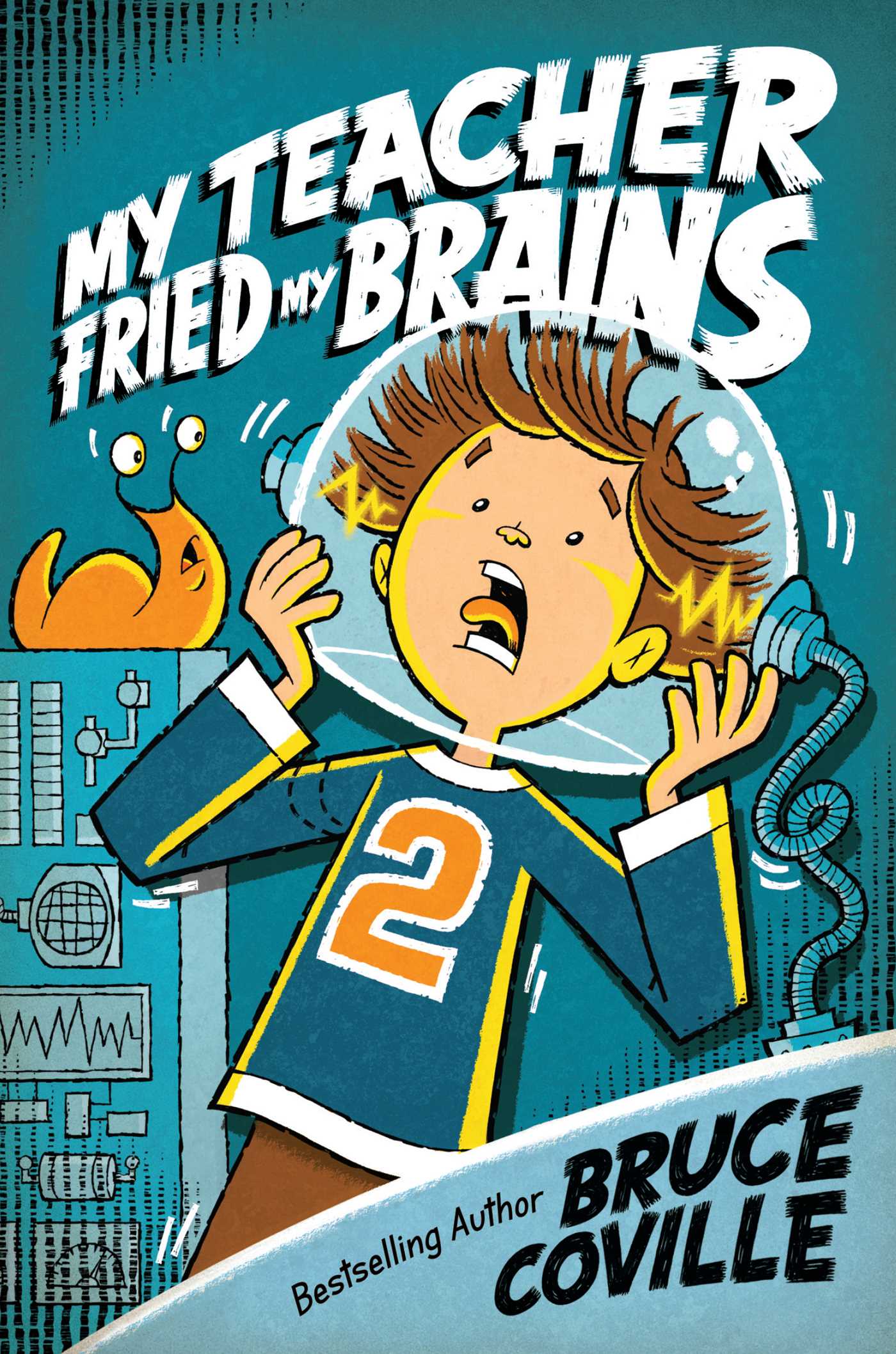 Book #2 of My Teacher Books
By Bruce Coville
LIST PRICE $17.99
PRICE MAY VARY BY RETAILER

The sequel to Bruce Coville’s bestselling My Teacher Is an Alien has a new look—and the same great (and gross) sci-fi adventures!

The first day of seventh grade is probably the worst day of Duncan Dougal’s life. He knows that things are really bad when he finds an alien’s hand in a Dumpster and then gets plugged into an alien brain fryer!

Can Duncan find out which of the four new teachers in his school is an alien before his brains get fried to a pulp—or before the aliens try to fry the whole planet?

My Teacher Fried My Brains CHAPTER ONE First Day Blues
I was standing in the bathroom, brushing my teeth, when I looked up and saw a horrible green face in the mirror.

“Hey, Duncan,” rasped a voice from behind me, “what time is it?”

A wave of terror washed over me. “Go away!” I yelled, spattering toothpaste foam across the mirror.

A strong arm wrapped around my neck. “Help!” I screamed. “Aliens!” But even as I was screaming, I saw in the mirror that the arm holding me was a strong human arm.

“Patrick!” I shouted, mad now instead of terrified. “Come on, Patrick, cut it ow!”

I said “OW!” instead of “out” because Patrick had just landed a major noogie on my skull. I would tell you why my big brother was beating on me if I could, but I can’t, because I don’t know. He just does that sometimes. I do it to other people. You know how it is: you get upset, things build up inside you, and suddenly you BOP! someone.

Or maybe you don’t. But that’s how things work in our family.

Patrick gave me another noogie.

“You creep!” I screamed, trying to wriggle out of his grip. “Get out of here!”

“Quiet up there!” shouted our father.

I would have yelled for him to make Patrick leave me alone, but it wouldn’t do any good. Dad’s theory is that life is rough, and I might as well get used to it. That may be true, but I’ve noticed that when I hit kids in school none of the teachers say, “Why, Duncan, what a good lesson you’ve just given little Jimmy in the fact that life is rough.” What they usually say is, “Look, you little jerk, I’ve had about enough of your antics. One more stunt like that and you’re heading straight to the principal’s office!” Or if they’re feeling particularly nice they might say, “Now, Duncan, that’s not how we solve our problems, is it?”

It is in our family. What planet are these teachers from?

“What planet are they from?”—a good question, considering what had been going on around our town.

See, things had been pretty tense in Kennituck Falls since last spring, when this alien named Broxholm kidnapped weird Peter Thompson and took him off into space. Even though Broxholm was gone, people were still frightened—as if they thought there were aliens still lurking around, waiting to grab people.

With the grown-ups that scared, you can be sure kids around here had about the worst summer ever, mostly because parents were afraid to let their little darlings out of the house. It seemed like the town motto was, “I don’t want you disappearing like that Peter Thompson.” (Well, my parents didn’t say that. But most of the others did.) I bet a hundred years from now people in this town will still be telling their kids that if they don’t behave an alien boogey man will get them.

To make things worse, Peter Thompson’s father—who didn’t really give a poop about Peter when he was here—had decided that he really missed his son.

I had stared at him for a moment. Mr. Thompson was skinnier than he used to be, and there were dark circles under his eyes. Then I remembered what Peter had said when he let me stay in his house to hide from the alien: “Don’t worry about my father. He won’t mind. He won’t even know!”

It had been true. Mr. Thompson was almost never there, and when he was, he didn’t pay any attention to Peter at all.

So I had looked at him, all skinny and sad, and said, “What do you care where he is?” Then I ran away because I was afraid he was going to hit me. I suppose it was a pretty rotten thing for me to say, but I had a feeling that the main reason Mr. Thompson was so upset was that everyone else thought he should be.

To tell you the truth, I kind of missed old Peter myself. Everyone used to think I hated him. That wasn’t true. I just picked on him because I didn’t know what else to do with him.

Well, maybe I did hate him a little, because he was so smart and I was so dumb. Except I wasn’t really dumb. I just thought I was. Of course, my family and my teachers had given me a lot of help in coming to that conclusion.

I was feeling plenty dumb when I got to school that morning. First of all, I was late because of the fight with Patrick. Second, my head hurt where my father had whacked me afterward. (At least he whacked Pat, too. He always treated us both the same way when it came to that.) Third, I couldn’t find my classes, so I kept walking in on things that were already in session.

The reason I couldn’t find my classes was that it was the first day of school, and I had never been in the building before.

The reason I had never been in the building was that I had played hookey the day we had our junior high orientation tour. I’d figured there was no point in going, since I hadn’t expected to pass the sixth grade. (I think the only reason I did pass, which was kind of a shock, was that after what happened with the alien the school decided to pass our whole class out of sympathy or something.)

Well, the first day in a new school is hard enough if you get there on time and have some idea of what’s going on. You don’t really need things like walking in late and having some big, tall man with black hair and eyes like coal grab your arm and say, “Not off to a very good start, are we, Mr. Dougal?”

That seemed to startle the man. (Actually, it startled me, too. But the way he grabbed me reminded me of the first time I had met Broxholm, when he was pretending to be a substitute teacher and stopped me from beating up on Peter Thompson.)

“Stop that!” said the man, giving me a shake.

I stopped, mostly because I had recognized him. He was the assistant principal. His name was Manuel Ketchum, and he had come to work at our school last spring, after the old assistant principal had a nervous breakdown. According to my brother Patrick, Mr. Ketchum was a real beast. Most kids called him “the Mancatcher” when he wasn’t around.

I guess the Mancatcher must have heard of me, too.

He asked me for an excuse for being late, which I didn’t have. Then he gave me a lecture about punctuality and responsibility, which made me even later for where I was trying to go.

I had to stick my head into three rooms before I found the one where I belonged. Each time I did, I could hear kids snickering when I left. That really fried me. I hate it when people laugh at me.

It was almost as bad when I finally did find the right room. It was home economics class! I couldn’t believe they had scheduled me for home economics.

Fortunately the teacher was a real babe. And she smiled when she saw me come in! That was the first nice thing that had happened all day.

“Are you Duncan Dougal?” she asked in a kindly voice. When I nodded she smiled again and said, “My name is Miss Karpou. I’m glad you finally made it.”

“She’ll change her mind once she gets to know him,” someone whispered.

The people who heard it started to laugh. I started to blush. If I could have figured out who said it, I would have whapped the jerk.

I did notice it was kind of nervous laughter. In fact, the whole seventh grade seemed a little twitchy that day. Kids are always a little nervous the first day of school, of course. But this was something more. I think being back in school had everyone thinking about the alien again.

Ms. Karpou went back to what she was talking about, which was how to use the equipment without hurting ourselves. Except she wasn’t very good at it, because she managed to burn herself almost immediately.

“Ouch!” she cried. She popped her finger into her mouth, then spun around and bent over the counter. For a minute I was afraid she was going to cry. Instead, she turned and ran out of the room.

I felt bad. Miss Karpou was young, she was pretty, and she had been nice to me. I didn’t want her to be sad.

The class got a little rowdy then, and pretty soon the Mancatcher came in to shut us up.

Naturally, he blamed everything on me.

As if things weren’t bad enough already, at lunchtime this huge eighth grader named Orville Plumber (which is probably half his problem anyway) came up to my table and said, “Hey, kid—you Duncan Dougal?”

I looked up and said, “What about it?”

Book #2 of My Teacher Books
By Bruce Coville
LIST PRICE $17.99
PRICE MAY VARY BY RETAILER