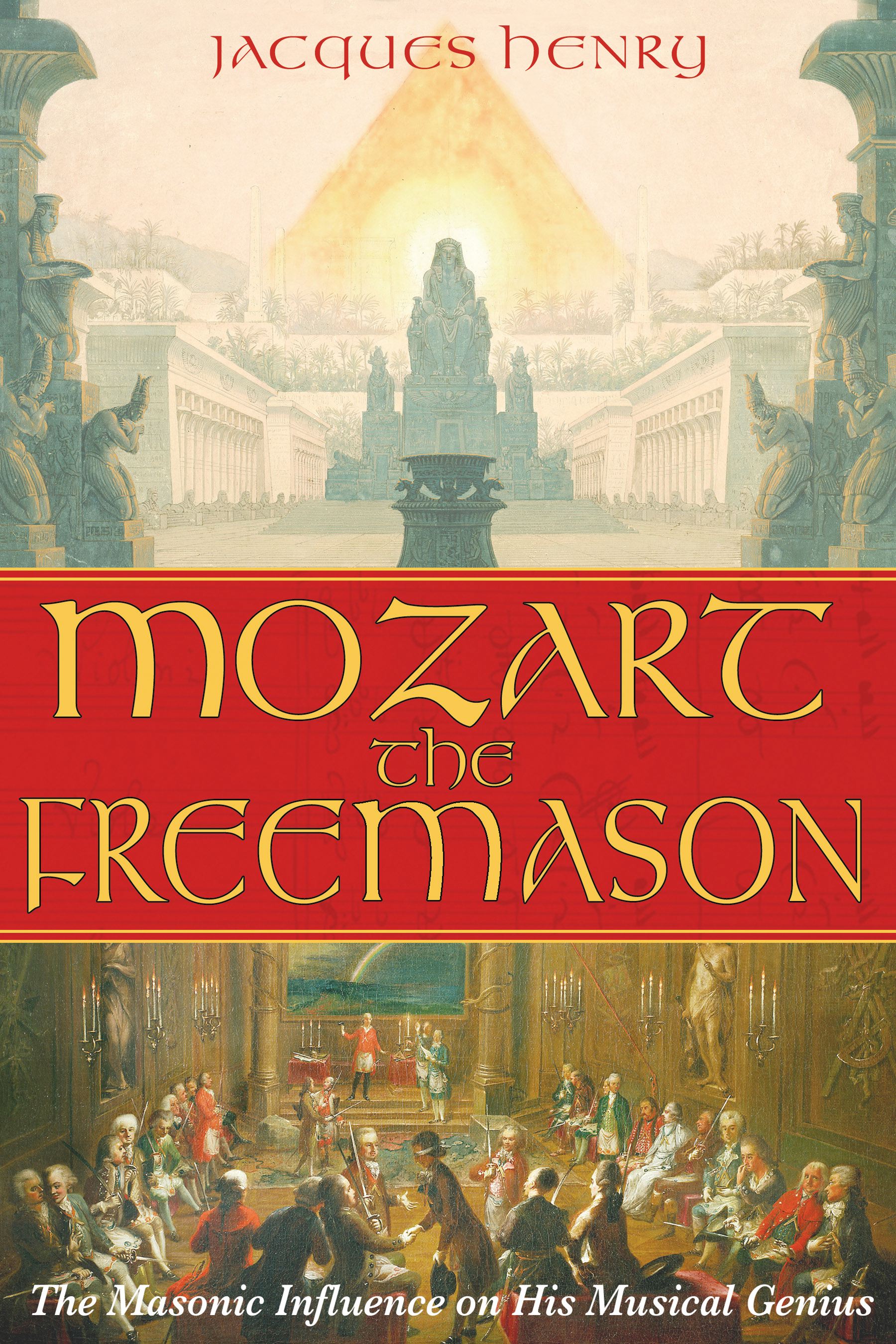 The Masonic Influence on His Musical Genius

By Jacques Henry
LIST PRICE $14.95
PRICE MAY VARY BY RETAILER

Thanks to recently discovered documents, we now have a fuller picture of the esoteric influences on the life and work of Wolfgang Amadeus Mozart. Musicologist Jacques Henry shows that the Masonic influence on Mozart goes beyond those pieces, such as The Magic Flute, that fulfilled a ritual purpose for the composer. His works actually provide a complete musical lexicon of Masonic symbols inspired by the principles of the craft and the spirit of the Masonic quest. Mozart constructed his Masonic compositions by creating auditory correspondences to the symbols present in the rituals, choosing keys and tempos that transpose their content into harmony. His understanding of the use of symbol allowed him to create music that would lead the listener into a harmony that transcended earthly existence.

A number of musicologists believe that the place of the Masonic spiritual vision in Mozart’s work is comparable to that held by Lutheran Christianity in the work of Johann Sebastian Bach. Mozart wed his deep understanding of music to the esoteric wisdom he gained as a Freemason. He shows that when we lose ourselves in the expression of pure harmony, it is the same as the symbol being lost in what it symbolizes. Jacques Henry provides a rigorous and original analysis of Mozart’s works that reveals their inner meaning as shaped by the composer’s profound embrace of the spiritual principles of Freemasonry.

From Symbols to Music

In the ritual and solely by its practice, the freemason is accorded the possibility of leaving the “secular world” in order to “raise his heart in brotherhood and turn his gaze toward the light.” The investigation and analysis of Masonic influence in Mozart’s works has meaning only in reference to this invocation and the living of it.

To live this invocation and the ritual to which it belongs as Wolfgang lived them is the only way we can understand the sources of his inspiration and follow the progression of his musical works--compositions which are equally capable of leading us from the profane to the sacred. Like ritual, the music speaks of rigor, strength, beauty, serenity, and light. Mozart knew that the musical transcription of the symbol he invoked made it possible to reach such a vision. This transcription of symbols, however, is not a process such as that with illustrative music which proceeds by citations supporting the process of “doing freemasonry.” The uninitiated listener does not need to know or recognize the symbols or appreciate their value in a work that they have inspired; he need only experience, by means of this music, an approach to another world. On the other hand, the initiate who listens to the work gains the opportunity to relive the emotion and feelings that he experiences during the ceremony among his brothers.

As soon as he enters the Lodge, the freemason is surrounded by the most meaningful visual symbols. They are always there before him: the floor layout itself (the black and white checkerboard tiling), the three steps that lead to the Grand Master’s chair, the lights placed on the three columns representing the three orders of Doric, Ionian, and Corinthian, the two columns symbolizing those of the Temple of Solomon, the sun and the moon, and so on. At certain moments in the ceremony, the freemason will hear auditory symbols: the beating of a mallet or the clapping of hands. By capturing these same symbols in the musical composition and transposing their content into harmonies, Mozart built his Masonic compositions.

Without specifying a hierarchical order among them, the symbols Mozart uses in order to “edify” the composition so that it will reflect his ideal are essentially the following:

• The march, always slow and of a processional character.

• Space, based on the visual elements of the Lodge and practices in the ritual.

• The transition from the unbuilt or unformed to rigor, “from raw stone to the cube of stone,” from chaos to order.

• Beats (or beating: the “knocks” of Masonic ritual).

• The steps that lead up to the Orient.

Mozart knew, through his experience, that the number three was fundamental and carried a message. In the Lodge, this number underlies the three luminaries of freemasonry (the Compass, the T-Square, and the Book of Sacred Law). He would keep this number in mind and quite naturally knew how to have recourse to it when he was composing a work whose inspiration referred to it.

Intervals of thirds
The superimposition of thirds, major or minor, constitutes a perfect chord and creates a serene harmony that has been recognized as such since Pythagoras first analyzed it. Thirds can be expressed either in the form of a non-arpeggiated chord (in which all the notes are played simultaneously) or as an arpeggiated chord (where the notes are played in succession). Thirds can also result from the superimposition, at this interval, of several melodic lines.

Mozart knows that the third, either in the form of a chord or in intervals expressed in a melodic line, is a symbol bearing harmony. Its use is not necessarily an indication of symbolism; it may be for the composer simply an expression of serenity. But conversely, when Mozart wants to express more particularly the serenity of Masonic thought, he turns to the interval of the third because he knows its evocative power. We need to cite in this regard, given their importance, the theme stated in thirds of the first movement of Symphony No. 39 in E flat major (K. 543) and the themes of the first and second movements of the Divertimento in E flat major, the “Puchberg” Trio (K. 563), which use this same mode of harmonic expression.

STEPS TOWARD THE ALTAR

Moving up steps to approach the altar or the temple has always been a universal symbol. It is among the easiest to recognize in a musical score. In the Lodge, in order to reach the Orient where the Grand Master is seated, you have to mount three steps. Moreover, these steps, designed as part of the ritual tableau at the center of the Masonic hall, are always visible to the freemason. In musical terms, they take the shape of ascending triplets at the beginning of the work. The listener easily perceives this especially descriptive form of imagery. The musical form appears to the ear just as the steps appear to the eye: the mark of a shift in levels.

In the essay in which he draws a parallel between Mozart and the poet Friedrich Hölderin, Michel Tamisier speaks of this device as “the menacing thrust used to begin the Concerto in D minor, the ‘Prague’ Symphony, and the ‘Jupiter’ Symphony.” He sees in this thrust the expression of an ascendant theme that is characteristic of Mozart’s genius. In addition, he is quite right in grouping these three compositions and noticing that all three use a similar musical device, the ascending thrust, so evocative for him, although he is unaware that this device is the transcription of the symbol of the steps leading to the Orient. In perceiving accurately--but unconsciously--the symbol of the rising steps, Tamisier brings together those works in which he sees the same inspiration.
Jacques Henry

Jacques Henry is artistic director of the annual Mozart festival in the Drome region of France and an expert on the symbolism in Mozart’s work. He lives in France.

"This is a book that no mason would want to miss."

“Whether you are coming from the world of music, or the world of Freemasonry, this is a book that will appeal to you, will inform you, and will act as an excellent resource towards Mozart, his music and his life.”

"Mozart the Freemason is a wonderful book, well written, and ideal for the musician as well as non-specialist."

"With Mozart the Freemason, Jacques Henry, a Mozart authority and a high-ranking Freemason, explores the influence of Masonry on Mozart's life and music. . . . One could hardly ask for a better poster child for Masonry than Mozart, or a better biographer than Jacques Henry."

The Masonic Influence on His Musical Genius

By Jacques Henry
LIST PRICE $14.95
PRICE MAY VARY BY RETAILER