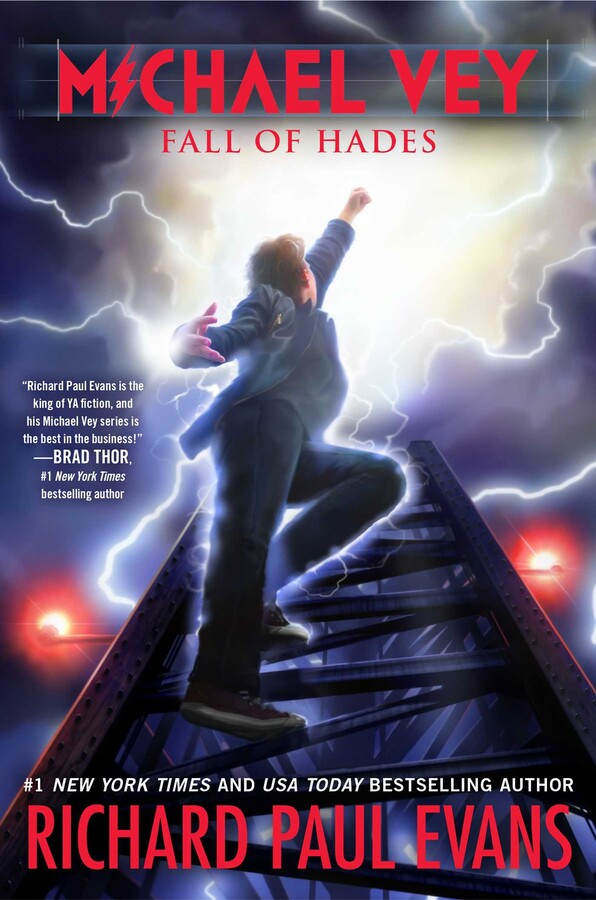 Michael and his friends try to recruit Hatch’s Electric Youth to their side as the thrilling action continues in this electrifying sixth installment of the New York Times bestselling series!

Michael and the Electroclan are about to embark on their deadliest mission yet. Some of them may not make it back.

The head of the resistance, known only as the voice, believes that the best way to wipe out the Elgen is to steal their money. That means capturing the Joule, the Elgen boat that serves as a floating treasury. To do this, Michael and his friends need help…a lot of help.

They’ve learned about a highly placed member of the Elite Elgen Guard named Welch, who wants to defect. They also know that Hatch has condemned three of his electric youth to death. If the Electroclan can get to Welch before the Elgen do, and if they can rescue Quentin, Torstyn, and Tara, they just might be able to steal the Joule. But it’s a big “if”…

The stakes have never been higher, and Michael and his friends are about to be tested in ways they never imagined.

1 Be Ashamed to Die
When I was just eight years old, a few months after my father died, I was going through a box of his things when I found a wooden plaque engraved with these words:

Be ashamed to die until you have

won some victory for humanity.

At the time the plaque didn’t mean much to me—other than that it had belonged to my father—but it must have meant something because I never forgot its message. Lately I’ve found myself thinking about it a lot. Maybe because it’s now my reality. You could say that I’m fighting a battle for humanity. Of course I could die and not win any victory, but I think that’s got to be worth something too.

I once heard a story that really bothered me. I don’t know if it was true or not. I hope not. I don’t even want to share it with you, it’s that awful. But for the sake of my story I’m going to. It goes like this:

There was a man who was in charge of switching the railroad tracks for the train. It was an important job because if the train was on the wrong track, it could crash into another train, killing hundreds of people.

One evening, as he was about to switch the tracks for an oncoming train, he suddenly heard the cry of his young son, who had followed him out and was standing on the track he was supposed to switch the train to. This was the dilemma—if he switched the tracks, the train would kill his son. If he didn’t, the people on the train, hundreds of strangers he didn’t even know, might die.

At the last moment he switched the tracks. The people on the train went on by, not even knowing the disaster they had missed or the little boy who had been killed beneath them. The father went home carrying his son’s broken body.

I hate that story, but it makes me think. I’ve wondered if, given the same situation, I would change the tracks or not. It’s easy to act noble and say you would when you’re not there, but what if it’s someone you can’t live without? What if it were Taylor standing on the tracks? Or Ostin? Or my mom?

That takes me back to my father’s plaque about winning a victory for humanity. The war we’re fighting against Dr. Hatch and the Elgen is one the world doesn’t even know about. And just like the guy with the train, if we pull this off, no one on earth, not even you, will ever know how close they came to complete disaster or who was “killed beneath the train.” Like Wade. Or maybe, in the end, all of the Electroclan. If we don’t win, no one will even know that we tried. How’s that for a stupid dilemma? At least we’ll have no reason to die ashamed.

My name is Michael Vey. If you’re still following the insanity of my life, then you’ve been all around the world with me. From my home in Meridian, Idaho (which I doubt I’ll ever see again), we went to California, where we broke into the Elgen Academy and I was captured and put into Cell 25. (Yeah, I still have nightmares about that.) Then we broke out, attacked Dr. Hatch, and freed all his GPs, aka human guinea pigs.

You went with me to Peru, where we brought down the Elgen Starxource plant after Dr. Hatch tried to feed me to, like, a million rats. It’s also where we lost Wade.

We traveled west to the Port of Lima, where we sunk two of the Elgen’s boats—their main command ship, the Ampere, and their battleship, the Watt. Unfortunately, Dr. Hatch got off the Ampere just before it blew up.

Then we went to Taiwan, where we rescued a genius little girl named Jade Dragon before the Elgen could get what she knew out of her head—mainly how to get their MEI machine to make more of us—electric people. It was after our escape from the Taiwan Starxource plant that we found out that the Elgen had attacked Timepiece Ranch, our home base and the resistance’s headquarters in Mexico.

We flew back to the ranch—or at least what was left of it after the Elgen helicopters bombed it to ashes. We thought that everyone was dead, until we were found by Gervaso, who took us to the resistance’s new headquarters at Christmas Ranch near Zion National Park in southern Utah. Then Taylor, Gervaso, Ian, and I went back to Boise, where we rescued Taylor’s parents.

Still, in spite of all we’ve done, the Elgen just keep growing stronger. Now we have a plan to stop them once and for all. We’re going to the Elgen base in the South Pacific island nation of Tuvalu, to steal the Joule—the Elgen’s floating piggy bank. As if that’s not crazy enough, that’s just one of our missions. Hatch has locked up three of his own electric kids for treason—his most powerful: Quentin, Tara, and Torstyn—and we’re going to try to free them. I can’t believe I’m even considering this. Along with Bryan, those are the same three who made fun of me just before Hatch tried to feed me to his rats in Peru.

This is the first time that all of us electrics (except Grace) will be going on a mission together. Even Tanner and Nichelle. Nichelle will be extremely valuable if Hatch’s electric kids decide not to cooperate. Still, this will be really dangerous for her. She betrayed Hatch the last time they met, and he’s not exactly the forgiving type. I’m guessing he’ll do anything to make her pay for what she did. Then again, I suppose that’s true for all of us.

I know, the whole plan seems crazy. If I had to lay odds on it, I’d say we’ve got a 10 percent chance of winning this one. I wouldn’t tell everyone else that. If I did, I’d have to drop that number to 1 percent, because if you think you’re going to fail, you most likely will—at least that’s what our gym teacher at Meridian High always said. But whether you think you’re going to lose or not, sometimes you do what you have to do because it’s the right thing, and let the chips fall where they may.

I think we’re about to drop a whole lot of chips.