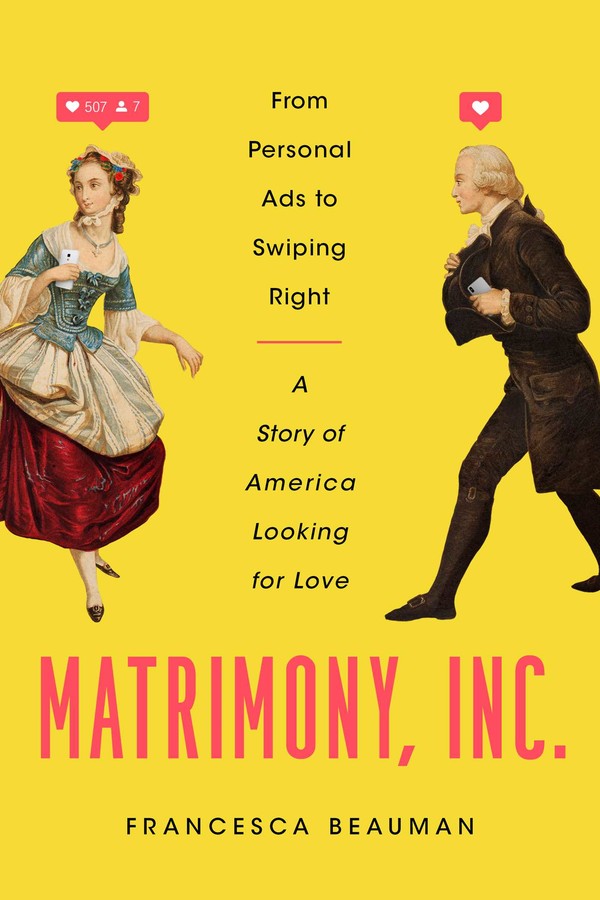 From Personal Ads to Swiping Right, a Story of America Looking for Love

A clever, thoughtful, and funny history that reveals how the Union of states was built on a much more personal union of people.

Have you ever used a dating app or website? Then you have more in common than you know with lonely homesteaders in 18th century New England. At once heartwarming and heartbreaking, Matrimony, Inc. reveals the unifying thread that weaves its way through not just marriage and relationships over the centuries, but American social history itself: advertising for  love.

Amazingly, America’s first personal ad appeared in the Boston Evening Post as early as 1759. A “person who flatters himself that he shall not be thought disagreeable” was in search of a “young lady, between the age of eighteen and twenty-three, of a middling stature, brown hair, of good Morals…” As family-arranged marriages fell out of fashion, "Husband Wanted" or "Seeking Wife" ads were soon to be found in every state in the nation.

From the woman in a Wisconsin newspaper who wanted “no brainless dandy or foppish fool” to the man with a glass eye who placed an ad in the New York Times hoping to meet a woman with a glass eye, the many hundreds of personal ads that author Francesca Beauman has uncovered offer an extraordinary glimpse into the history of our hearts’ desires, as well as a unique insight into American life as the frontier was settled and the cities grew. Personal ads played a surprisingly vital role in the West: couple by couple, shy smile by shy smile, letter by letter from a dusty, exhausted miner in California to a bored, frustrated seamstress in Ohio. Get ready for a new perspective on the making of modern America, a hundred words of typesetter’s blurry black ink at a time.

“So anxious are our settlers for wives that they never ask a single lady her age. All they require is teeth,” declared the Dubuque Iowa News in 1838 in a state where men outnumbered women three to one. While the dating pools of 21st century New York, Chicago or San Francisco might not be quite so dentally-fixated, Matrimony Inc. will put idly swiping right on Tinder into fascinating and vividly fresh historical context. What do women look for in a man? What do men look for in a woman? And how has this changed over the past 250 years?

After a decade as a T.V. host, Francesca Beauman is now a writer, historian and part-time bookseller at London’s most beautiful bookstore, Persephone Books. Francesca is the author of six books, including a history of the pineapple and a history of British personal ads. She also runs the popular book forum “Fran’s Book Shop” (@fransbookshop).

“Beauman has uncovered a treasure trove of fascinating detail. Matrimony Inc is the ultimate proof that we humans are fools for love. But also desperate, courageous, and occasionally lucky."

“A fascinating, hilarious, and occasionally heartbreaking work of history. With wry wit and a trained eye for the absurd, Beauman takes a cultural artifact that seems so perishable and rescues it from the scrap heap. These lonely-heart epistles tell a larger story about social life in America, homesteads, cities, newspapers, gender relations, and the enduring appeal of ‘a good set of teeth.’”

“A gorgeous book. It turns out that the search for love actually was always funny, sad, weird and wonderful.”

"Francesca Beauman writes with elegance, wit and profound intelligence. Matrimony, Inc. is a wonderful book full of impressive original research which charts how personal ads shaped the course of American history. A joyous and clever read.”

– Elizabeth Day, author of The Party and How to Fail

“Who among us hasn’t been a voyeur of the personal ad? Beauman’s deep historical dive into a person’s most naked ask into the universe is hilarious and maddening and heartbreaking, and reveals through these incredible finds how the needs and expectations of what we look for in a mate have evolved, and what has stubbornly remained the same. You won’t be able to hear the phrase ‘swipe right’ quite the same way again."

“Fascinating. Ever since there were newspapers there were personal ads. Reading them is a peek into the romantic hopes and dreams of people who felt the desire to reach out in this public way. Beauman’s book gives us a window into the history of the U.S. and the politics of how marriage shaped this country."

“Francesca Beauman’s “Matrimony, Inc.” is a lively history of America’s commercialized hunt for romance, from the quaint personals in 18th century gazettes to the crude come-ons of the internet age. Though the specifics change, the challenges remain constant.”

"Advertising for a partner was, in 1778, pretty radical. But according to historian Francesca Beauman’s t wouldn’t be long before men and women from all over the new country would embrace this unconventional, optimistic and deeply American way of finding a mate.”

"Beauman is a companionable and witty narrator and an excellent curator of primary source material. History buffs will be entertained."

From Personal Ads to Swiping Right, a Story of America Looking for Love