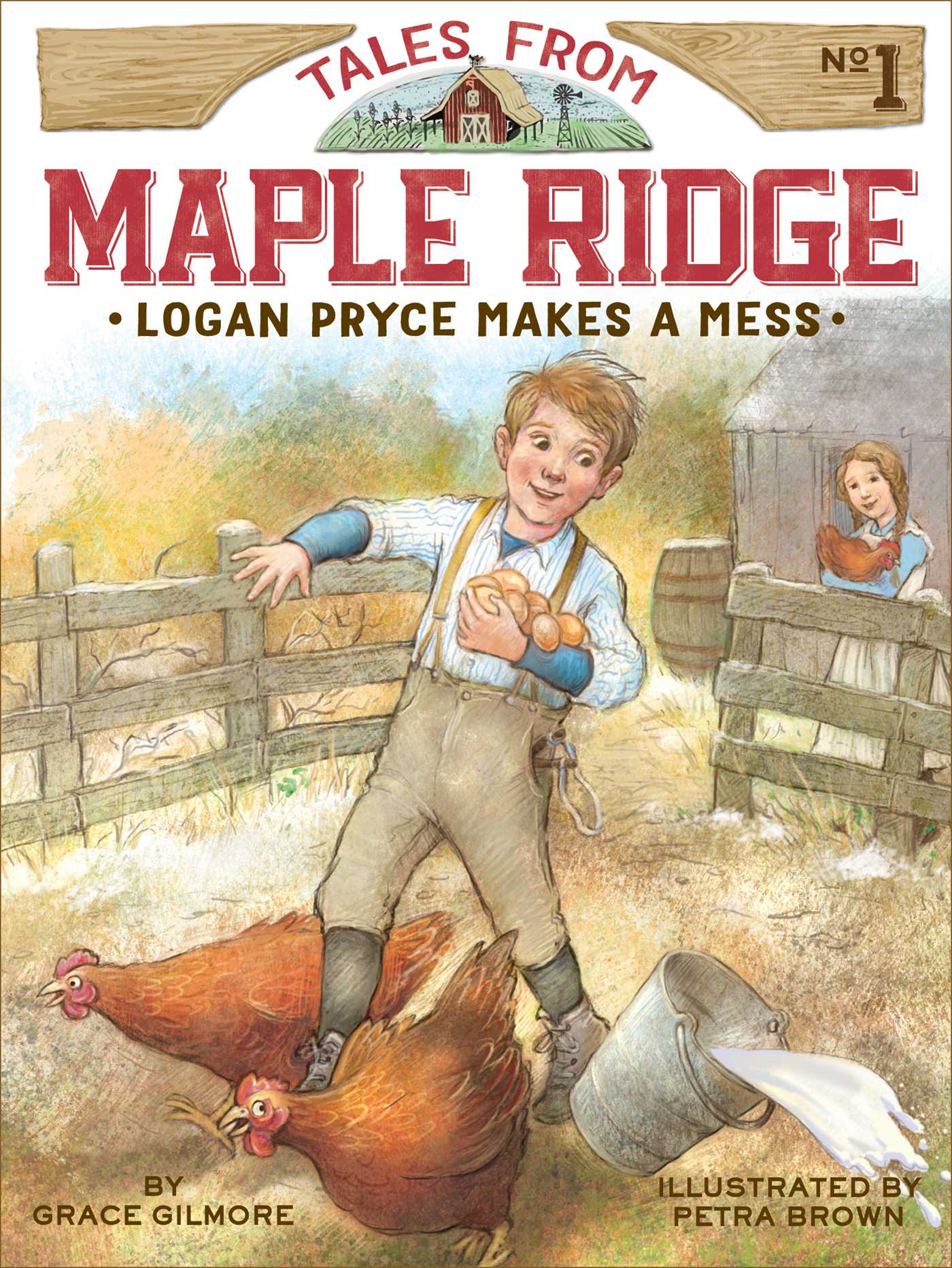 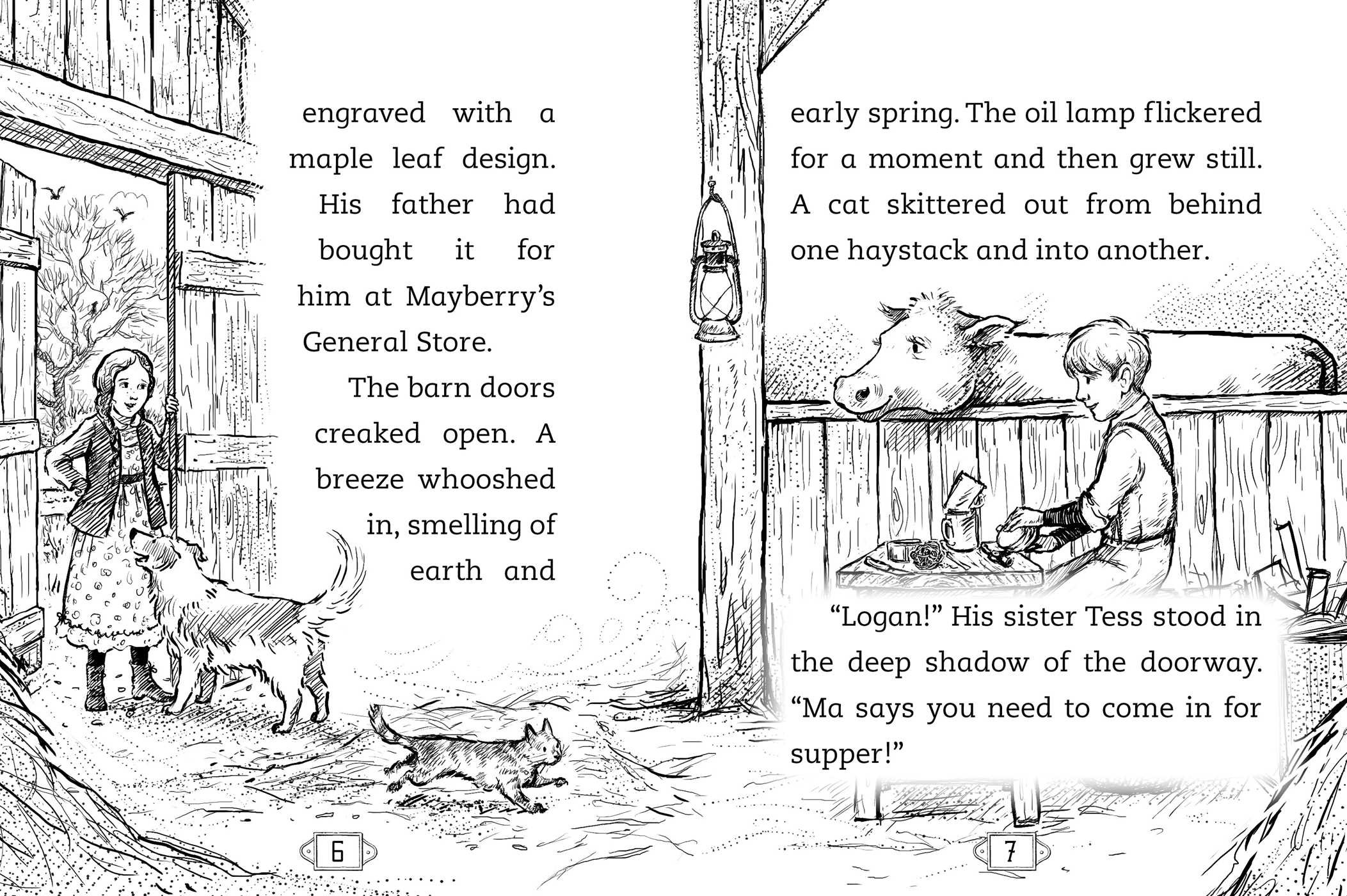 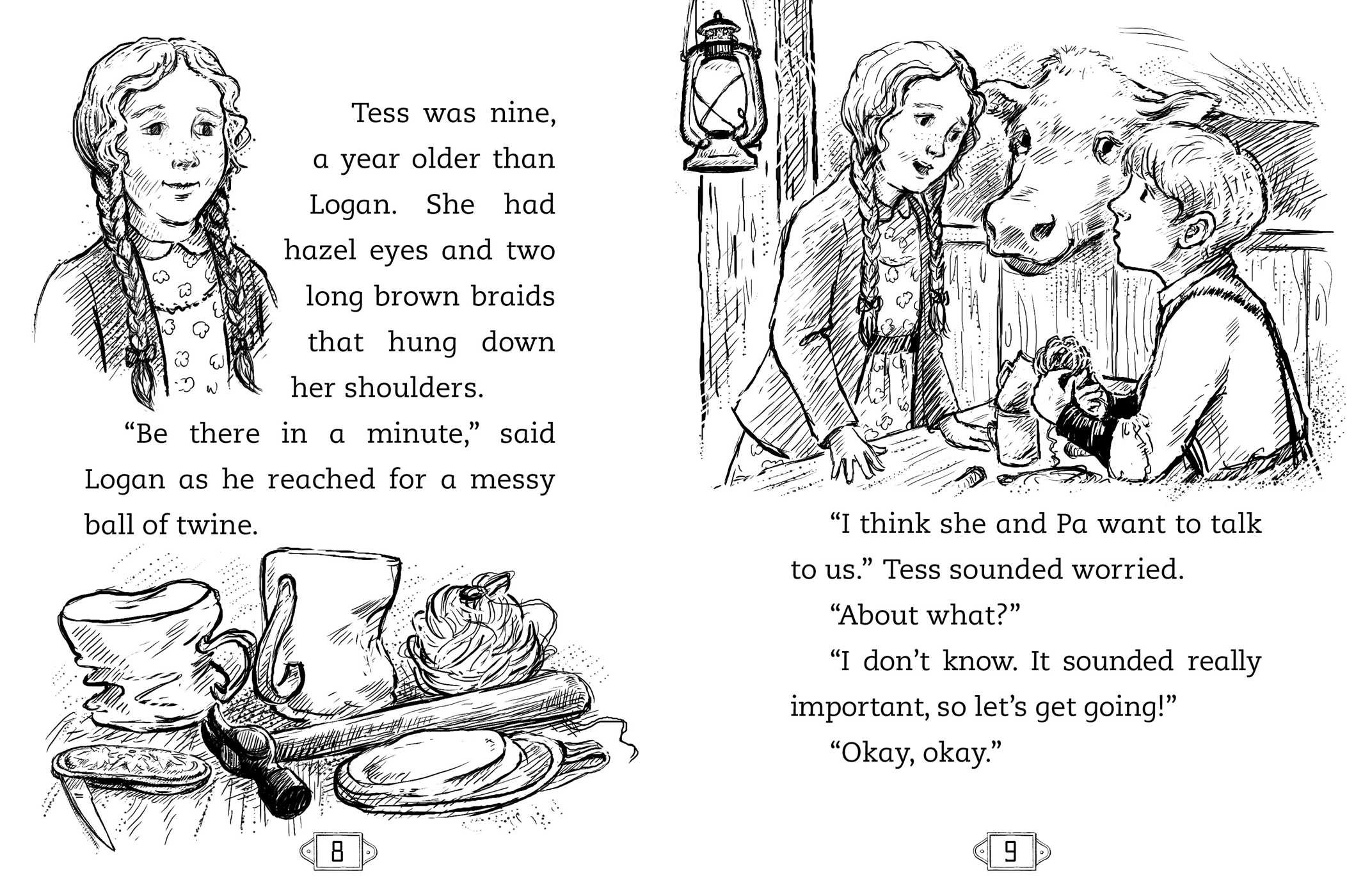 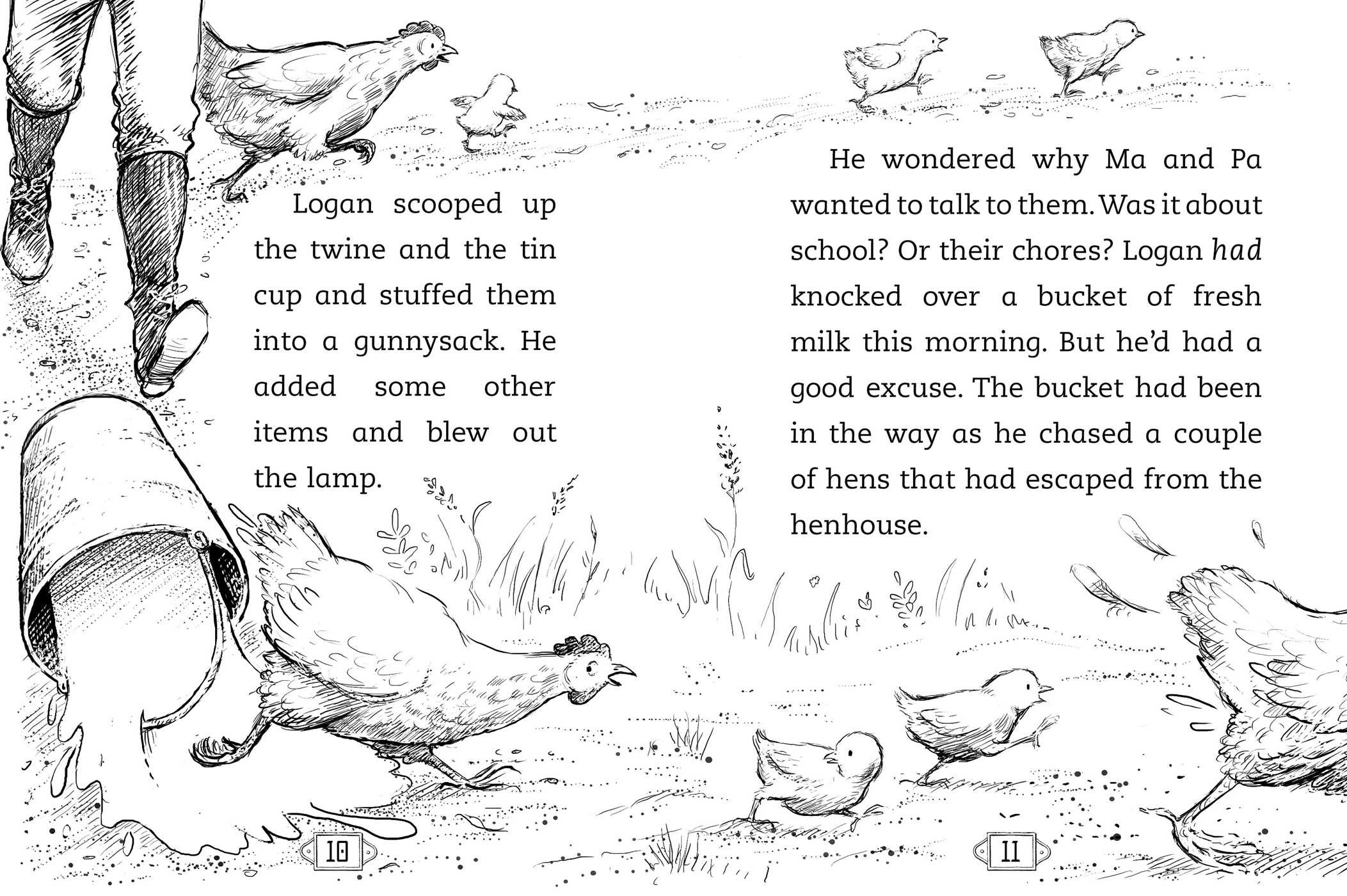 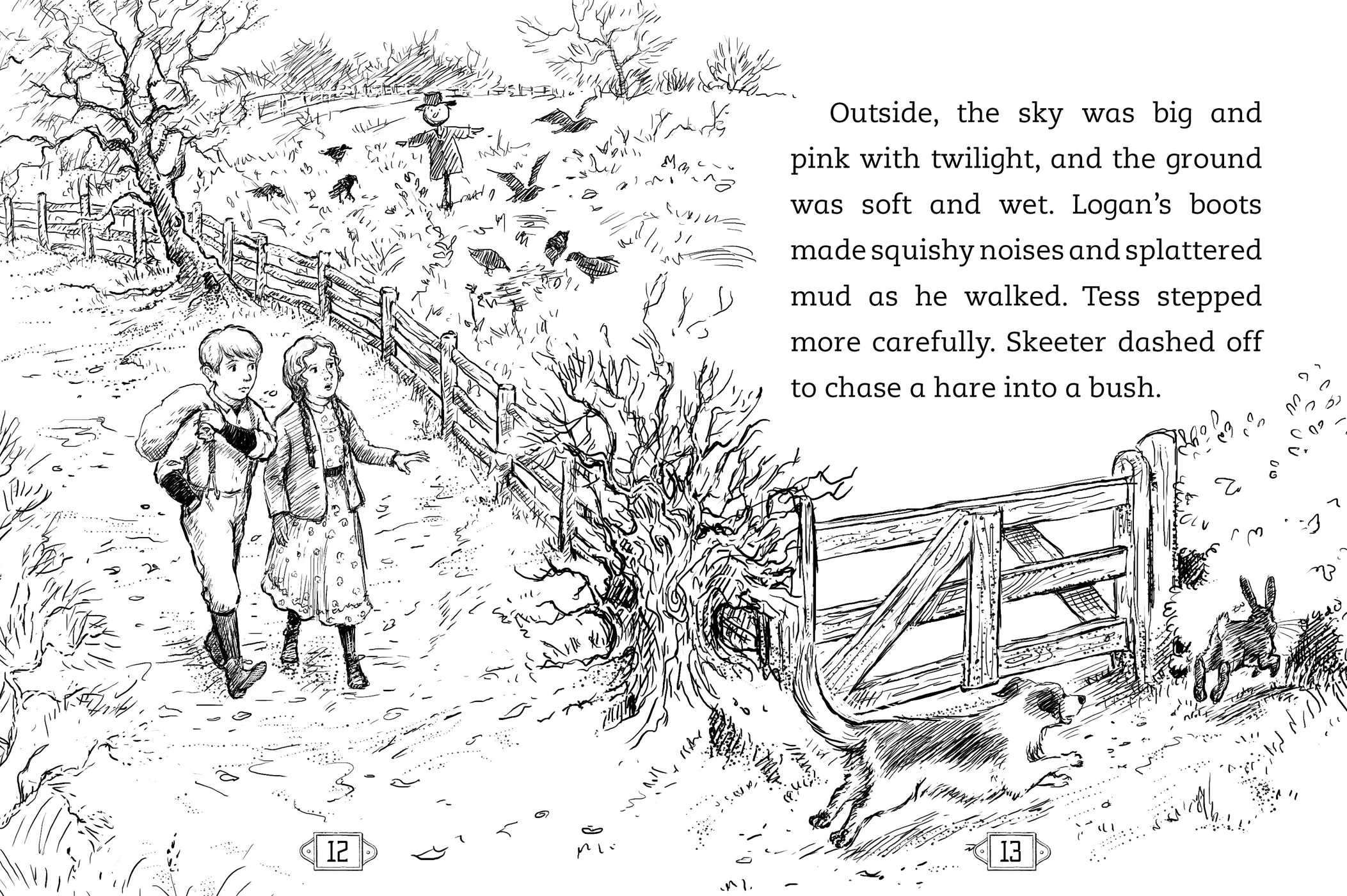 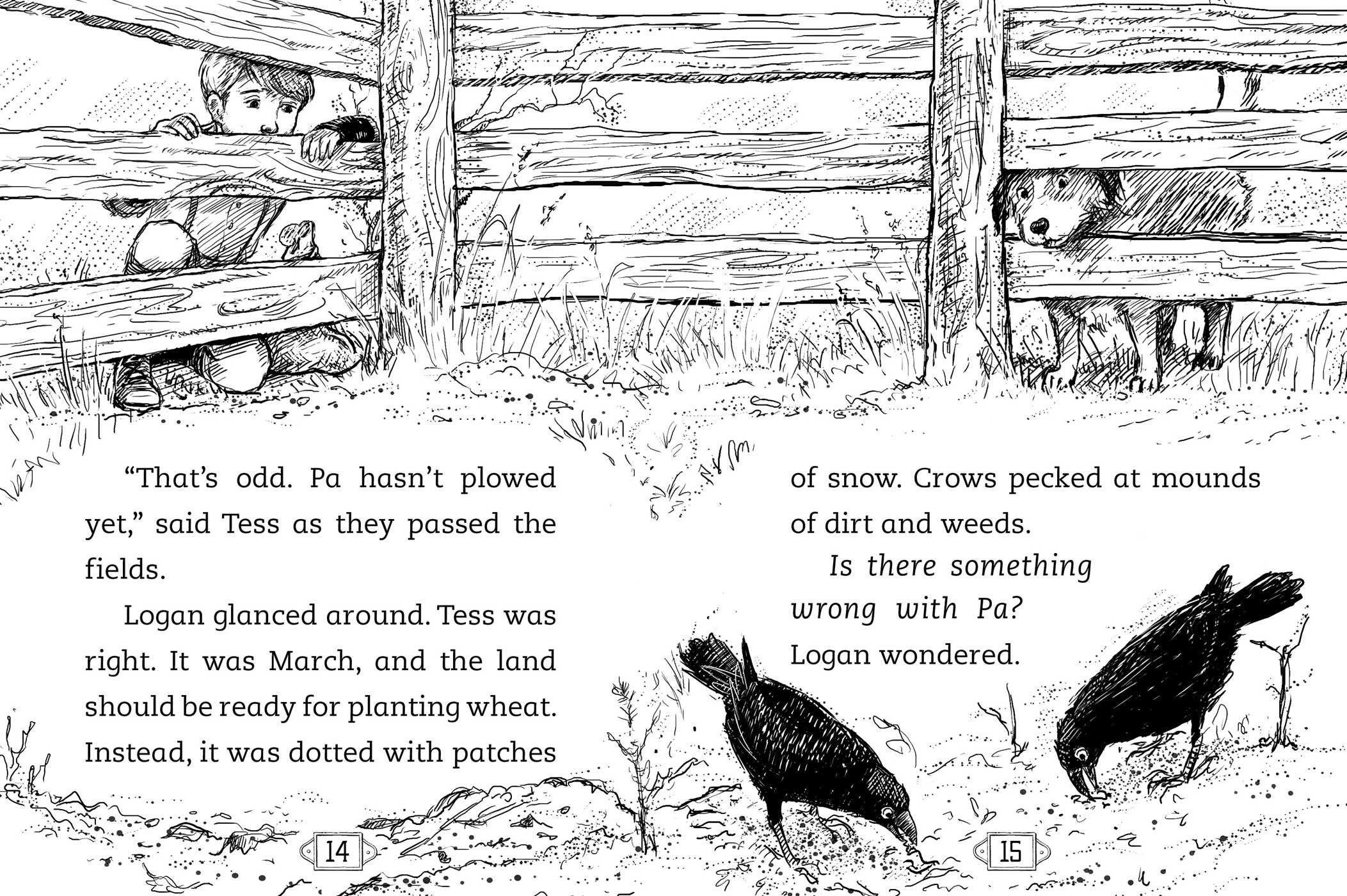 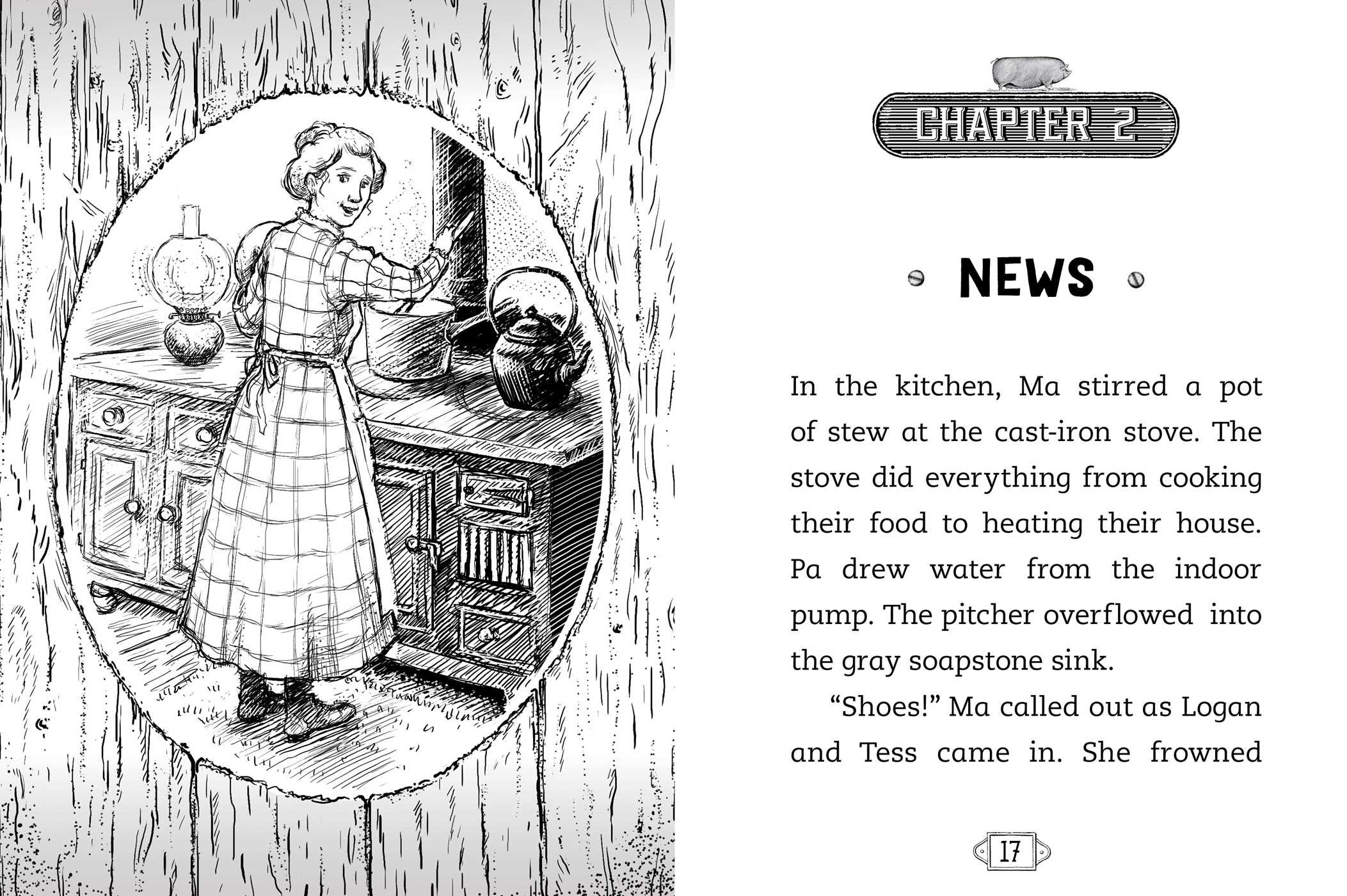 Meet Logan Pryce, an eight-year-old boy whose family hardships are made better by his small-town community in this start to a wholesome series that’s like Little House on the Prairie for younger readers.

It’s 1892 in Maple Ridge, Illinois, and Logan Pryce is worried about his family. His dad, Dale, needs to find a new job because their farm is failing. He may even need to look for work in another city. Logan offers to earn some money by selling his latest invention, but his parents tell him not to worry and that everything will be fine. Then Dale is hired for a temporary job at the general store, and Logan can’t wait to lend a hand! But his eagerness may cause his dad to lose the job he so badly needs. Can Logan’s mistake be fixed in time?

With easy-to-read language and illustrations on almost every page, the Tales from Maple Ridge chapter books are perfect for beginning readers.

THE FIX-IT SHOP
Logan Pryce picked up a hammer and pounded the tin cup.

“The Fox-Away is going to be my best invention ever,” he told Skeeter. Skeeter barked and wagged his honey-colored tail. He always agreed with everything Logan said.

Logan leaned closer to the oil lamp and continued hammering. Nearby, the horses munched on their oats and paid no attention. The cows did the same with their hay. The farm animals were well used to Logan and his Fix-It Shop.

The Fix-It Shop was where Logan mended broken things. Sometimes, he even recycled them into new things, like the Fox-Away.

The Fix-It Shop took up an entire stall in the corner of the barn. Logan’s worktable was a wooden board standing on two steady sawhorses. His chair was a blue wooden barrel with the words DICKINSON’S WITCH HAZEL stamped on it.

Logan had lots of raw materials to tinker with. China cups without handles. Mismatched buttons. A cracked butter churn. A cuckoo clock that no longer told the time. The objects spilled out of crates and scattered across the floor.

He had many tools, too. His favorite was a silver pocketknife engraved with a maple leaf design. His father had bought it for him at Mayberry’s General Store.

The barn doors creaked open. A breeze whooshed in, smelling of earth and early spring. The oil lamp flickered for a moment and then grew still. A cat skittered out from behind one haystack and into another.

“Logan!” His sister Tess stood in the deep shadow of the doorway. “Ma says you need to come in for supper!”

Tess was nine, a year older than Logan. She had hazel eyes and two long brown braids that hung down her shoulders.

“Be there in a minute,” said Logan as he reached for a messy ball of twine.

“I think she and Pa want to talk to us.” Tess sounded worried.

“I don’t know. It sounded really important, so let’s get going!”

Logan scooped up the twine and the tin cup and stuffed them into a gunnysack. He added some other items and blew out the lamp.

He wondered why Ma and Pa wanted to talk to them. Was it about school? Or their chores? Logan had knocked over a bucket of fresh milk this morning. But he’d had a good excuse. The bucket had been in the way as he chased a couple of hens that had escaped from the henhouse.

Outside, the sky was big and pink with twilight, and the ground was soft and wet. Logan’s boots made squishy noises and splattered mud as he walked. Tess stepped more carefully. Skeeter dashed off to chase a hare into a bush.

“That’s odd. Pa hasn’t plowed yet,” said Tess as they passed the fields.

Logan glanced around. Tess was right. It was March, and the land should be ready for planting wheat. Instead, it was dotted with patches of snow. Crows pecked at mounds of dirt and weeds.

Is there something wrong with Pa? Logan wondered.

Grace Gilmore is a city girl, but she has always been fascinated by farm life. Growing up, she spent many summers riding horses, chasing chickens, and swimming in the creek at her great-grandparents’ farm in the hollows of Kentucky. When she isn’t writing books, she can be found playing the piano, baking cookies, or wrangling various pets. Grace lives with her family in Ithaca, New York.

Petra Brown lives at the foot of Mount Snowdon near the little Ffestiniog railway, in the beautiful country of North Wales, United Kingdom. When she was a child, she used to love to look through books and draw the pictures herself. Now she finds that illustrating children’s books is immensely satisfying. You can visit her at PetraB.co.uk.

More books in this series: Tales from Maple Ridge