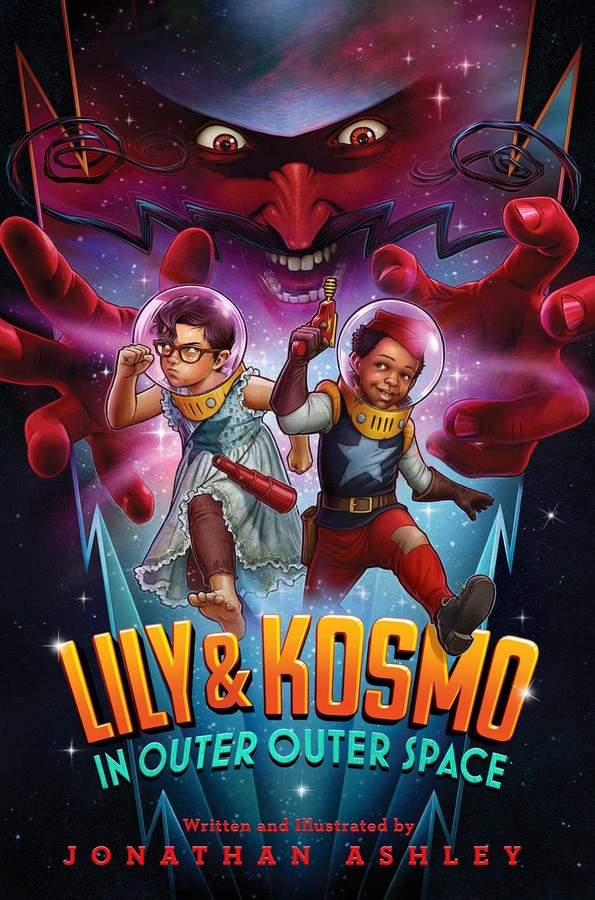 Lily Lupino is going to be an astronaut when she grows up. For now, she’ll have to settle for listening to science fiction programs on the radio. But when certified Spacetronaut Kosmo Kidd crash lands his wind-up rocket ship in Lily’s kitchen, it’s a chance Lily can’t pass up!

Mistaking Lily for a boy, Kosmo agrees to take her back to his floating treehouse in the stars, but it doesn’t take long for the other Spacetronauts to figure out that Lily is a girl. Kosmo has accidentally broken Spacetronaut Rule #1: NO WIMMEN ALOWD!

Banished to the far reaches of Outer Outer Space, Lily and Kosmo explore exotic alien worlds, meet a menagerie of colorful creatures, and tangle with the vilest villain in space, The Mean-Man of Morgo. But Lily’s greatest challenge is proving to her new Spacetronaut peers that a girl from Brooklyn can hold her own among the galaxy’s unruliest rascals.

Lily & Kosmo in Outer Outer Space CHAPTER 1 Brooklyn, Earth, 1949
The night Lily Lupino locked herself in the bathroom and cut off all her hair, a piece of space crash landed in her living room, in the form of a boy astronaut named Kosmo Kidd. He came by rocket, a small beat-up number that smashed through the ceiling while the Lupinos slept—well, not Lily. Lily was too mad to sleep. It started with a radio, looming over the living room like a cherrywood lighthouse, and the whine of a theremin, announcing the start of tonight’s episode of Trip Darrow: Star Pilot. . . .

Mr. Lupino was done listening to the evening news, and Mrs. Lupino’s favorite music program, Bandstand, didn’t come on until eight. Seven p.m. belonged to Lily Lupino, Astronaut in Training. For the fifth Thursday in a row, she sat cross-legged on the carpet, in the amber glow of the radio’s dial, grabbed the knob, and tuned in to join the baritone spaceman Trip Darrow, and his squeaky sidekick, Deirdre. Tonight, the five-part epic “Mutants on Moon Base Four” would reach its thrilling conclusion.
Jonathan Ashley

Jonathan Ashley is an author, playwright, concept artist, and filmmaker from Arizona. He studied fine art at Boston’s Museum School and filmmaking at NYU. His illustrations and designs have been featured in films, commercials, comic books, and puppet shows. He lives with his wife and daughter in the shadow of the Manhattan Bridge, on the Brooklyn side.

Jonathan Ashley is an author, playwright, concept artist, and filmmaker from Arizona. He studied fine art at Boston’s Museum School and filmmaking at NYU. His illustrations and designs have been featured in films, commercials, comic books, and puppet shows. He lives with his wife and daughter in the shadow of the Manhattan Bridge, on the Brooklyn side.

"Humorous space opera with a distinct [Doctor] Who flavor."

Ashley's... imaginative debut is embellished with humorous illustrations, including fish-bowl helmets, a tree fort, and toy ray guns—all things from which dream adventures are made.

This brilliantly silly story moves at a brisk pace with a lot of action, well-timed jokes, and detailed illustrations... 1940s space opera charm into a modern kid–sized package.