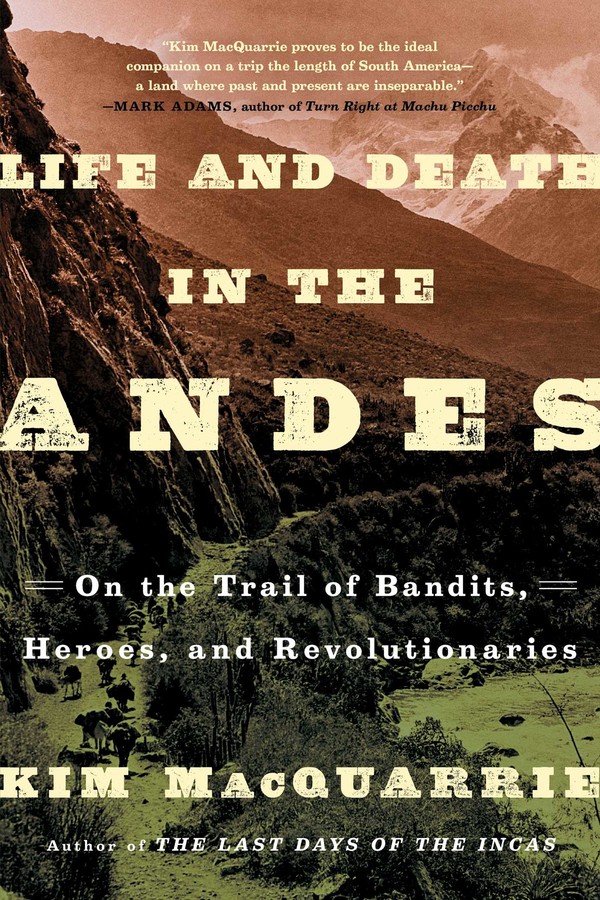 By Kim MacQuarrie
LIST PRICE $13.99
PRICE MAY VARY BY RETAILER

“A thoughtfully observed travel memoir and history as richly detailed as it is deeply felt” (Kirkus Reviews) of South America, from Butch Cassidy to Che Guevara to cocaine king Pablo Escobar to Charles Darwin, all set in the Andes Mountains.

The Andes Mountains are the world’s longest mountain chain, linking most of the countries in South America. Kim MacQuarrie takes us on a historical journey through this unique region, bringing fresh insight and contemporary connections to such fabled characters as Charles Darwin, Che Guevara, Pablo Escobar, Butch Cassidy, Thor Heyerdahl, and others. He describes living on the floating islands of Lake Titcaca. He introduces us to a Patagonian woman who is the last living speaker of her language. We meet the woman who cared for the wounded Che Guevara just before he died, the police officer who captured cocaine king Pablo Escobar, the dancer who hid Shining Path guerrilla Abimael Guzman, and a man whose grandfather witnessed the death of Butch Cassidy.

“MacQuarrie writes smartly and engagingly and with…enthusiasm about the variety of South America’s life and landscape” (The New York Times Book Review) in Life and Death in the Andes. Based on the author’s own deeply observed travels, “this is a well-written, immersive work that history aficionados, particularly those with an affinity for Latin America, will relish” (Library Journal). 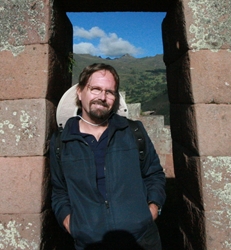 Kim MacQuarrie is a four-time Emmy Award–winning filmmaker and award-winning author who has lived and worked all over the world. Educated in the US and France, he lived for five years in Peru and spent some of that time living with a recently contacted tribe in the Amazon jungle, only 100 miles from Machu Picchu. He is the author of Life and Death in the Andes and The Last Days of the Incas, as well as three illustrated books about Peru. He currently divides his time between the US, Peru, and Thailand. Visit him at KimMacQuarrie.com.

“In this vivid, engaging hybrid of travel and history, Kim MacQuarrie proves to be the ideal companion on a trip the length of South America—a land where past and present are inseparable.”

– Mark Adams, author of TURN RIGHT AT MACHU PICCHU: Rediscovering the Lost City One Step at a Time

“[MacQuarrie] writes smartly and engagingly and with a sense of populist enthusiasm about the variety of South America’s life and landscape.”

"Fascinating. . . . A poignant summary of the collision between the ancient and the modern that has done much to shape the Andean region."

"MacQuarrie's book is as richly detailed as it is deeply felt. . . . A thoughtfully observed travel memoir and history."

“The human history that has shaped South America is dramatically re-created in this rich account of iconic Andes characters, from Pablo Escobar and Hiram Bingham to Che Guevara and Butch Cassidy.”

“Few writers know the mountainous spine of South America better than Kim MacQuarrie, and fewer still can match the richness, verve, and competence he brings to his work. Whether focused on Darwin's extraordinary journey through icy Patagonia or the demise of Che Guevara in Bolivia, MacQuarrie displays an unfailing talent for great storytelling and an exceptional depth of knowledge. Life and Death in the Andes is a beautifully crafted book that brings to vivid life one of the most spectacular and mysterious landscapes on the planet.”

– Scott Wallace, author of The Unconquered: In Search of the Amazon's Last Uncontacted Tribes

"MacQuarrie is a master storyteller whose cinematic eye always shines through."

"MacQuarrie spectacularly describes the Andes. This is a well-written, immersive work that history aficionados, particularly those with an affinity for Latin America, will relish.”

“It was an inspired idea to weave a journey through the Andes with tales of some of its most flamboyant characters – gangsters like the drug baron Pablo Escobar and the bank robber Butch Cassidy, murderous idealists like Che Guevara and the founder of the Shining Path insurgency, or Charles Darwin and the Patagonian indigenous peoples. Kim MacQuarrie tracks down their descendants or acolytes, and enthralls the reader with their stories and his own travels.”

– John Hemming, author of THE CONQUEST OF THE INCAS

“Life and Death in the Andes brings its people and the gorgeous, oftentimes awe-inspiring, country alive.”

By Kim MacQuarrie
LIST PRICE $13.99
PRICE MAY VARY BY RETAILER