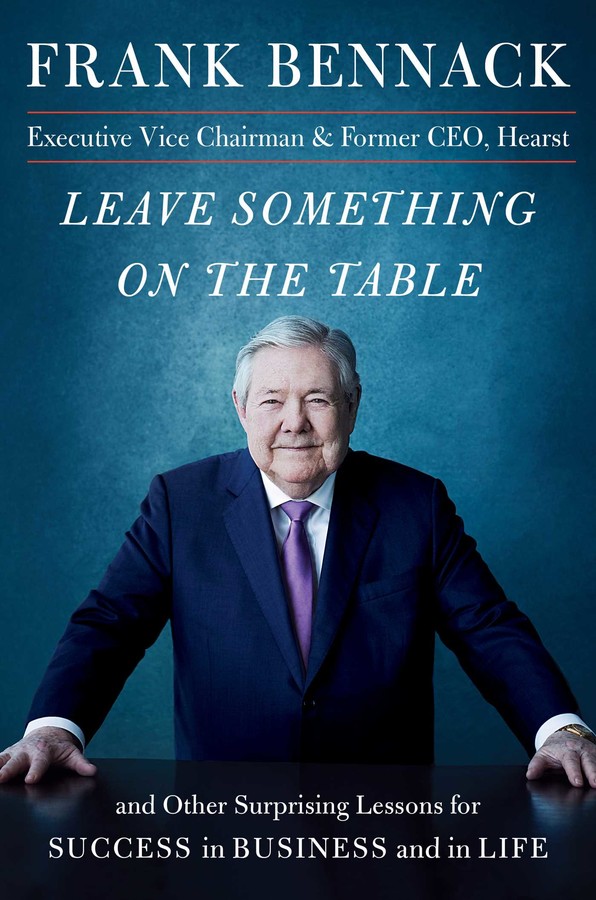 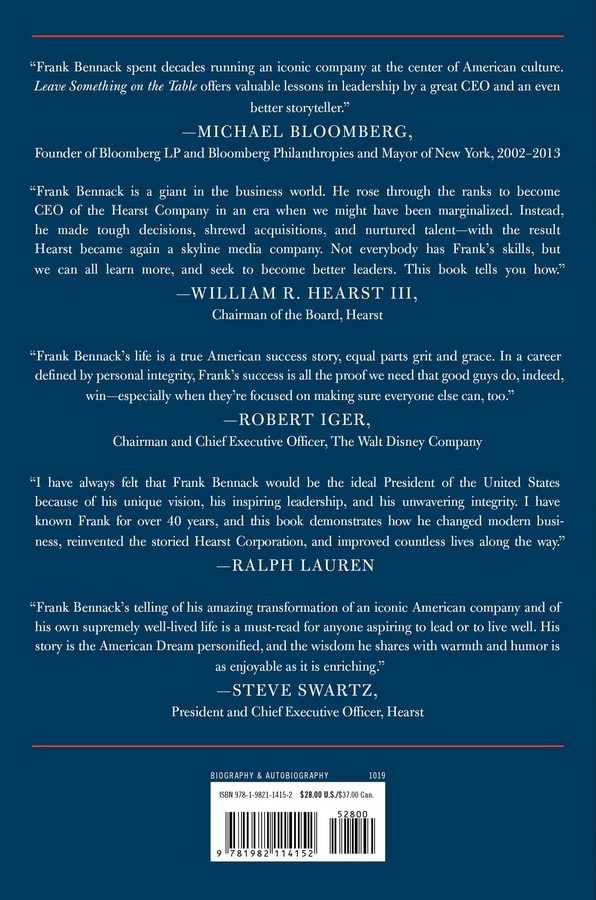 Leave Something on the Table

and Other Surprising Lessons for Success in Business and in Life

By Frank Bennack
LIST PRICE $28.00
PRICE MAY VARY BY RETAILER

One of the most innovative minds in business provides an equally original guide to getting ahead.

Frank Bennack’s accomplishments in media and business are unrivaled.

He was named chief executive of Hearst in 1979, and for nearly 30 years he helped solidify the company’s reputation as a leader in consumer media, overseeing the purchase of more than two dozen television stations and several major newspapers (Houston Chronicle), the launch of top-selling magazines (O, The Oprah Magazine), and a partnership with ABC, now the Walt Disney Company, to create the pioneering cable networks A&E, HISTORY, and Lifetime. One of his greatest achievements was when, in 1990, he negotiated a 20 percent stake in ESPN for $167 million. The sports network would be valued by market analysts at roughly $30 billion. He also played a key role in Hearst’s march toward diversification, with acquisitions of business media assets including global ratings agency Fitch Group.

In Leave Something on the Table, Bennack takes readers behind the scenes of these high-stakes moves and offers practical tips for excelling in the corporate world and beyond. He tells stories from his Texas childhood—a first job at 8, his own television show at 17—that foretold why he would become a CEO at 46. And he shares his encounters with US presidents, reflects on his longtime commitment to philanthropy, and describes his and his colleagues’ unwavering quest to build the visionary Hearst Tower.

This is a heartfelt handbook for how to advance not only as a professional but as a person. As Bennack writes, “It’s not currently fashionable to make the case for the high road. It looks longer, and old-fashioned, and it’s easy to conclude that while you’re climbing the ladder, burdened by your values, others are reaching the top faster. But if the stories in these pages suggest a broader truth, it’s exactly the opposite: The high road is quicker, with a better view along the way, and more satisfaction at the summit.”

Prologue Prologue
This is a book of stories. I was CEO of Hearst for almost three decades, so many of those stories are about business. But the point of telling these stories is not to revisit old challenges, brag about long-ago successes, or explain how, on my watch, we transformed a 1950s magazine and newspaper company into a hundred-year-old start-up.

Although I’m in many of these stories—hey, it’s my book—they’re really about the people in my life, and what I learned from them, and what we accomplished together.

In many of these stories you’ll also meet two remarkable and accomplished women. Luella Mae Smith, my high school girlfriend, became my wife for more than fifty years. She died tragically and without warning on April 17, 2003. She is central to the period from 1949 to 2003. Dr. Mary Lake Polan, to whom I was married on April 2, 2005, has supported me and enriched my life on many levels. She has been an important force throughout my second tour as CEO of Hearst, as well as during my Lincoln Center and NewYork-Presbyterian Hospital chairmanships. Like Luella, she has made the good times better and the difficult times bearable.

If these stories offer some wisdom, it’s this: the importance of values in our private lives and work lives—the value of values.

You don’t hear much about values in the business press these days. Mostly you hear about transactions. That’s inevitable. The deals are bigger now. There’s more and louder publicity accompanying them. The claimed benefits generally include a better world—often a better world through technology.

Some of the stories you’ll find in these pages describe transactions that made headlines, but what’s more important, I think, is how and why those transactions happened. Underpinning the business reasons were relationships, some going back for decades. And underpinning those relationships was mutual understanding. It didn’t need to be verbalized—our lives and our businesses were the proof. Under our roofs, people came together, shared a mission, created a culture, and produced superior products. And what connected them? Our shared values.

This will sound quaint to some readers.

Institutional culture and character—building it, maintaining it, passing it on—is a slow process. My parents taught me what is important—honesty, integrity, hard work, concern for others—and that mistakes, and I’ve made my share, can be overcome. My mentors showed me how to build on that foundation. My colleagues and partners led by example. And then our enterprise succeeded beyond our expectations.

We live in a time of the instant trend, the pop-up shop, the product that defines the moment and vaporizes fast. Of course, there are businesses that have experienced meteoric growth because they were first with a good idea; Hearst invested in some and got a nice return. But others puzzle me. How can enormously profitable companies take no responsibility for what appears on their screens? If a company becomes successful by running roughshod over the competition and flaunting its ability to operate outside government regulations, can it really reform itself? And this, most of all: Can a company that runs on algorithms ever acquire human values?

It’s not currently fashionable to make the case for the high road. It looks longer, and old-fashioned, and it’s easy to conclude that while you’re climbing the ladder, burdened by your values, others are reaching the top faster. But if the stories in these pages suggest a broader truth, it’s exactly the opposite: The high road is quicker, with a better view along the way, and more satisfaction at the summit. And you end up loving rather than hating your partners.

I’ve worked for Hearst for more than six decades. I was its leader for twenty-eight years. That makes me a double unicorn—in this century, few will collect gold watches for long service, and fewer will lead businesses for decades. But it’s not just CEOs who are confronting an uncertain future. In this supercharged climate, solid achievement and energetic commitment are no guarantee of continued success; everyone, at every level, in every enterprise, is legitimately anxious. So how are smart, ambitious people to make their way?

I believe there is one unchanging North Star. It isn’t what you know, and how hard you work, and how clever you are. It’s not even who you know. It’s how other people know you. It’s who you are. 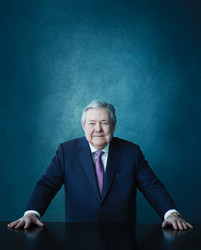 Frank Bennack is executive vice chairman and former CEO of Hearst, a leading global media, information and services company with more than 20,000 employees and 360-plus businesses. During Bennack’s tenure as CEO, he directed the company through an unprecedented period of growth from when he began his first tenure as CEO in 1979 through June 2013 when he stepped down increasing revenues 14 times and growing earnings more than 30 times. He is also chairman of the company’s Executive Committee, a director of Hearst, and a trustee of the Hearst Family Trust. In addition, he sits on a number of corporate committees and the Hearst Foundations Boards, where he has served for more than 25 years. Bennack is currently a director of Ralph Lauren Corporation. He is chairman of Hearst Magazines UK, a wholly owned subsidiary of Hearst. Bennack is also a governor and former chairman of NewYork-Presbyterian Hospital and its Healthcare System, a managing director of the Metropolitan Opera of New York, chairman emeritus of Lincoln Center for the Performing Arts, and chairman of The Paley Center for Media (formerly The Museum of Television & Radio).

Leave Something on the Table

and Other Surprising Lessons for Success in Business and in Life

By Frank Bennack
LIST PRICE $28.00
PRICE MAY VARY BY RETAILER