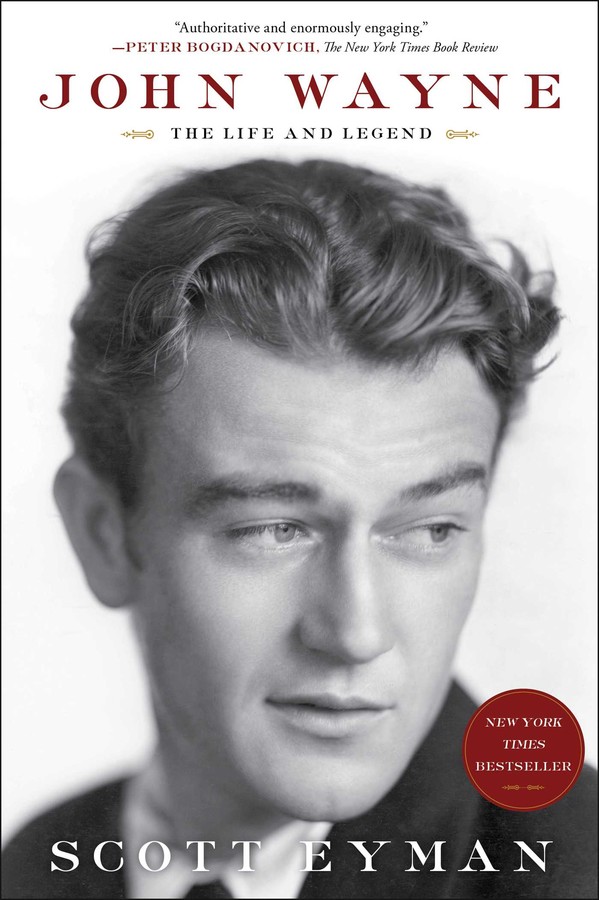 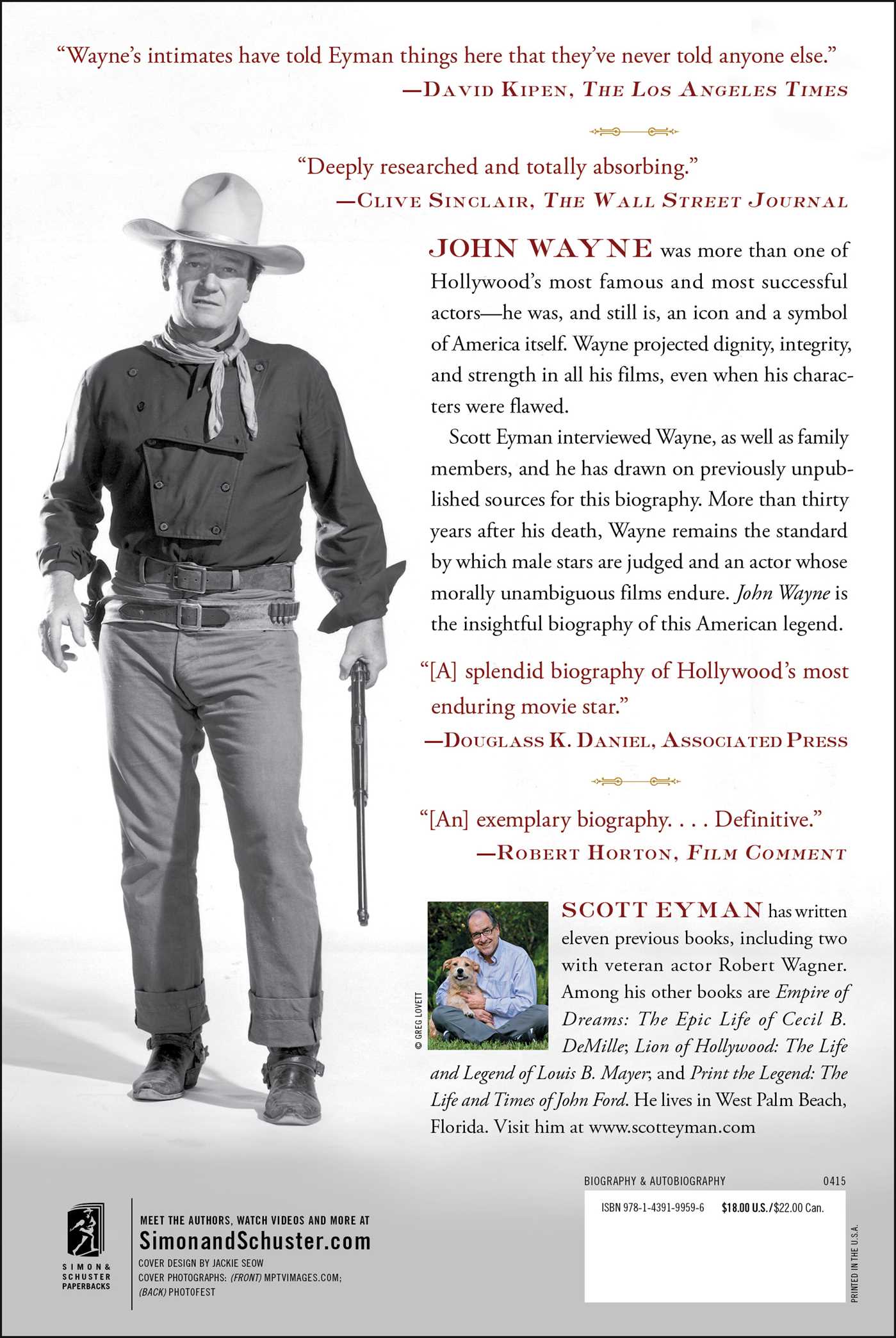 Scott Eyman: What Are You Reading? 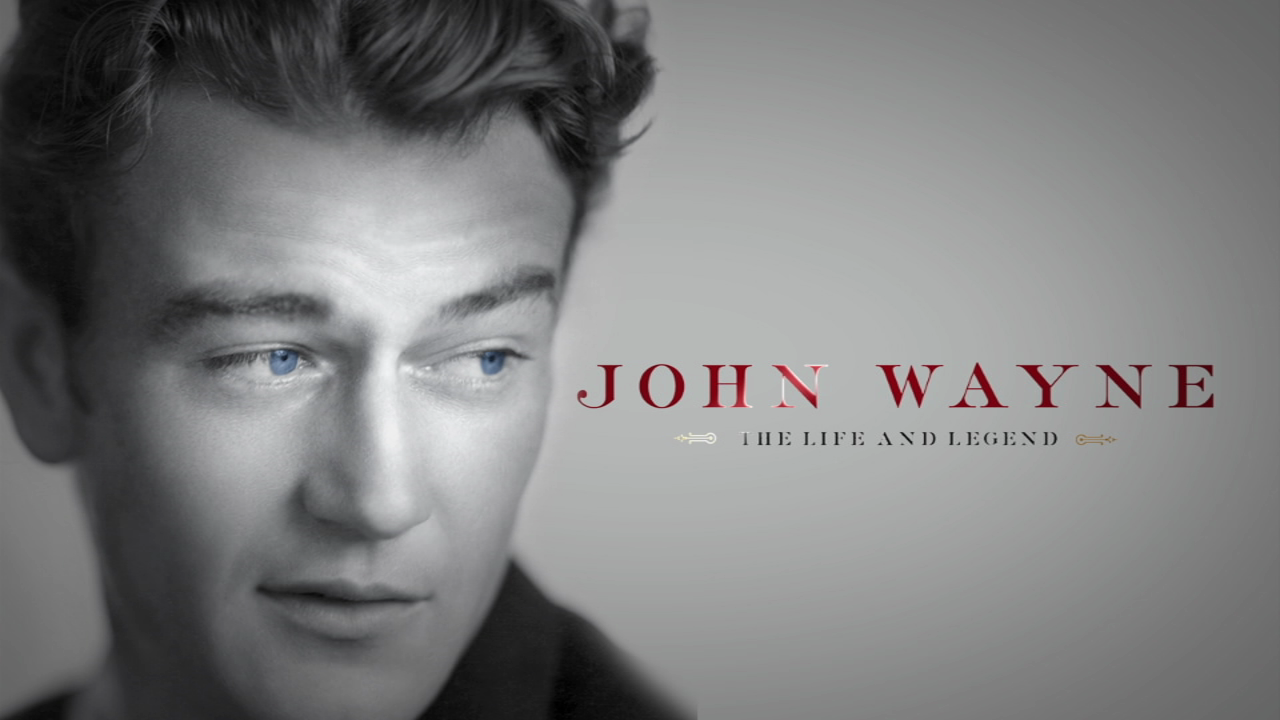 John Wayne: The Real Life of a Hollywood and American Icon

John Wayne: The Life and Legend

By Scott Eyman
LIST PRICE $22.00
PRICE MAY VARY BY RETAILER

The New York Times bestselling biography of John Wayne: “authoritative and enormously engaging…Eyman takes you through Wayne’s life, his death, and his legend in a detailed, remarkably knowledgeable yet extremely readable way” (Peter Bogdanovich, The New York Times Book Review).

John Wayne died more than thirty years ago, but he remains one of today’s five favorite movie stars. The celebrated Hollywood icon comes fully to life in this complex portrait by noted film historian and master biographer Scott Eyman.

Exploring Wayne’s early life with a difficult mother and a feckless father, “Eyman gets at the details that the bean-counters and myth-spinners miss…Wayne’s intimates have told things here that they’ve never told anyone else” (Los Angeles Times). Eyman makes startling connections to Wayne’s later days as an anti-Communist conservative, his stormy marriages to Latina women, and his notorious—and surprisingly long-lived—passionate affair with Marlene Dietrich. He also draws on the actor’s own business records and, of course, his storied film career.

“We all think we know John Wayne, in part because he seemed to be playing himself in movie after movie. Yet as Eyman carefully lays out, ‘John Wayne’ was an invention, a persona created layer by layer by an ambitious young actor” (The Washington Post). This is the most nuanced and sympathetic portrait available of the man who became a symbol of his country at mid-century, a cultural icon and quintessential American male against whom other screen heroes are still compared. 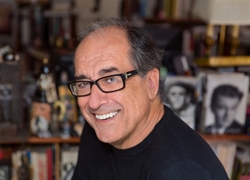 “[An] authoritative and enormously engaging new biography. . . . [Eyman] takes you through Wayne’s life, his death and his legend in a detailed, remarkably knowledgeable yet extremely readable way.”

“A spirited portrait of John Wayne and the Hollywood he worked in. . . . Traces his transition from the eager, boyish roles he played in early movies to confident leading man.”

“No Wayne biography until now has ridden the defile between the reverential and the tendentious with quite the graceful equilibrium of this one. . . . Eyman gets at the details that the bean-counters and myth-spinners miss. . . . Wayne's intimates have told Eyman things here that they've never told anyone else.”

“We all think we know John Wayne, in part because he seemed to be playing himself in movie after movie. Yet as Eyman carefully lays out, ‘John Wayne’ was an invention, a persona created layer by layer by an ambitious young actor.”

“Scott Eyman has taken a legend and a statue and given us an odd, decent, muddled but deeply likeable man. That’s what makes this book so readable and so touching.”

– David Thomson, author of The New Biographical Dictionary of Film and Moments That Made the Movies

“[An] exemplary biography. . . . Eyman appears to have had broad access to Wayne’s business and family life, and the result is a book with a compelling claim to being definitive.”

“In comprehensive detail, this new biography chronicles a great star at work. . . . Like a cinematographer, Mr. Eyman offers readers Wayne from many angles, in his own words and the words of those who worked with him. . . . An engrossing record of how the Duke stayed top dog for so long.“

“One of the greatest movie star biographies ever written.”

“A comprehensive and compelling examination of The Duke. . . . Insightful, exhaustive and engrossing—a definitive portrait of the man and the legend.”

“Eyman’s exhaustively informative biography is, in essence, a tribute. One ends it liking Duke a lot more.”

"Full of historical detail and fan facts, John Wayne tracks shy Marion Robert Morrison's path to the screen hero who got scant credit for his own craft in creating the John Wayne that rallied audiences."

“It would be hard to find a more complete picture of a public figure’s life and legend than Eyman gives us of the Duke.”

John Wayne: The Life and Legend

By Scott Eyman
LIST PRICE $22.00
PRICE MAY VARY BY RETAILER