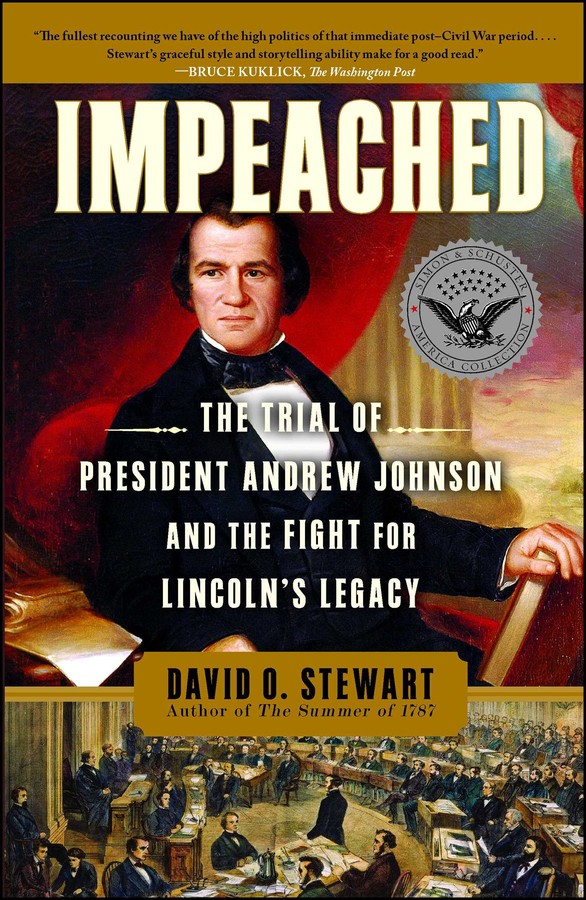 Historian and Constitution expert David O. Stewart recaps the landmark impeachment trial of President Andrew Johnson. “The fullest recounting we have of the high politics of that immediate post-Civil War period...Stewart’s graceful style and storytelling ability make for a good read.” —The Washington Post

In 1868 Congress impeached President Andrew Johnson of Tennessee, the man who had succeeded the murdered Lincoln, bringing the nation to the brink of a second civil war. Enraged to see the freed slaves abandoned to brutal violence at the hands of their former owners, distraught that former rebels threatened to regain control of Southern state governments, and disgusted by Johnson's brawling political style, congressional Republicans seized on a legal technicality as the basis for impeachment -- whether Johnson had the legal right to fire his own secretary of war, Edwin Stanton.

The fiery but mortally ill Congressman Thaddeus Stevens of Pennsylvania led the impeachment drive, abetted behind the scenes by the military hero and president-in-waiting, General Ulysses S. Grant.

The Senate trial featured the most brilliant lawyers of the day, along with some of the least scrupulous, while leading political fixers maneuvered in dark corners to save Johnson's presidency with political deals, promises of patronage jobs, and even cash bribes. Johnson escaped conviction by a single vote.

David Stewart, the author of the highly acclaimed The Summer of 1787, the bestselling account of the writing of the Constitution, challenges the traditional version of this pivotal moment in American history. Rather than seeing Johnson as Abraham Lincoln's political heir, Stewart explains how the Tennessean squandered Lincoln's political legacy of equality and fairness and helped force the freed slaves into a brutal form of agricultural peonage across the South.

When the clash between Congress and president threatened to tear the nation apart, the impeachment process substituted legal combat for violent confrontation. Both sides struggled to inject meaning into the baffling requirement that a president be removed only for "high crimes and misdemeanors," while employing devious courtroom gambits, backstairs spies, and soaring rhetoric. When the dust finally settled, the impeachment process had allowed passions to cool sufficiently for the nation to survive the bitter crisis. 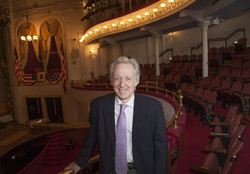 David O. Stewart is an award-winning author and the president of the Washington Independent Review of Books. He is the author of several acclaimed histories, including Madison’s Gift: Five Partnerships That Built America; The Summer of 1787: The Men Who Invented the Constitution; Impeached: The Trial of President Andrew Johnson and the Fight for Lincoln’s Legacy; and American Emperor: Aaron Burr’s Challenge to Jefferson’s America. Stewart’s first novel is The Lincoln Deception.

"David Stewart's Impeached is as riveting and rollicking as the best Washington novel. There is all kinds of intrigue -- from allegations of bribery by a 'whiskey ring,' to a cabinet secretary barricading himself in his office, to an incoming vice president giving a drunken tirade on Inauguration Day -- all played out at a deadly serious time, with the Union hanging in the balance. Only it's not a novel; it's Stewart's meticulously researched re-rendering of a time in our history that, he argues persuasively, has been distorted to turn a racist and incompetent Andrew Johnson and his anti-impeachment supporters into courageous defenders of Abe Lincoln's legacy." -- Steven Brill, author of The Teamsters and After; founder of The American Lawyer and Court TV

"Anyone who thinks American politics has lately been at a high level of viciousness should read this gripping story of Andrew Johnson's impeachment trial. There are fewer angels than we have thought, and more political hatred and knife work -- all with fundamental underlying issues of justice and race." -- Anthony Lewis, former New York Times columnist and author of Gideon's Trumpet

"Riveting...Stewart vibrantly renders...the poisonous politics, the personal animosities and the unbridled corruption.... Likely to become the standard version of this historic clash between a president and Congress." -- Kirkus Reviews (starred)

"David O. Stewart's "Impeached" is the fullest recounting we have of the high politics of that immediate post-Civil War period. As the author astutely tells us, the Constitution's impeachment clauses provide a complex legal remedy for enmity between Congress and the president....Stewart's graceful style and storytelling ability make for a good read. The author maintains interest by emphasizing the heavy drinking and hyperbolic oratory in an age of excess." -- Washington Post

"In his magnificent Impeached: The Trial of President Andrew Johnson and the Fight for Lincoln's Legacy, David O. Stewart, author of the highly acclaimed Summer of 1787, provides an extraordinary narrative that brings the many key players vividly to life while at the same time exhibiting an admirable clarity in discussing issues and events.... Stewart's book splendidly illuminates an important chapter in American history." -- BookPage

"A lucid and long-overdue reexamination...[Stewart] documents this remarkable tale of political bloodletting with skillful aplomb and insight. His grasp of legal complexities...is matched by a good eye for the human dimensions of this continuation of war by other means." -- Christian Science Monitor

"[T]he climax of a life-and-death struggle between Johnson and the "Radical Republicans" in Congress. At stake were competing visions of the path of Reconstruction....Stewart, an attorney, eloquently frames the issues and provides a stirring narrative of this dramatic conflict....The process of impeachment was characterized by hypocrisy and outright bribery." -- Booklist

"David O. Stewart's proven dexterity in handling detail, suspense and melodrama in matters of state are again present here. He brings impressive research to a bizarre episode in American history, the impeachment and trial of President Andrew Johnson, woven into such a vivid story that the reader is in the visitors' gallery. The story has high drama, low farce, unlikely comedy, a stellar cast, hubris, vanity and bad judgment. There is ambition, hostility, personal devotion, patriotism, betrayal and bribery." -- Washington Times

"[A] sprightly, exhaustively researched, and highly readable account of a dark era in American history.... Stewart tells the story of the Senate trial with high drama, as gripping as any legal fiction...but all the more riveting because it is factual.... Put this one in your beach bag for summer." -- Washington Lawyer