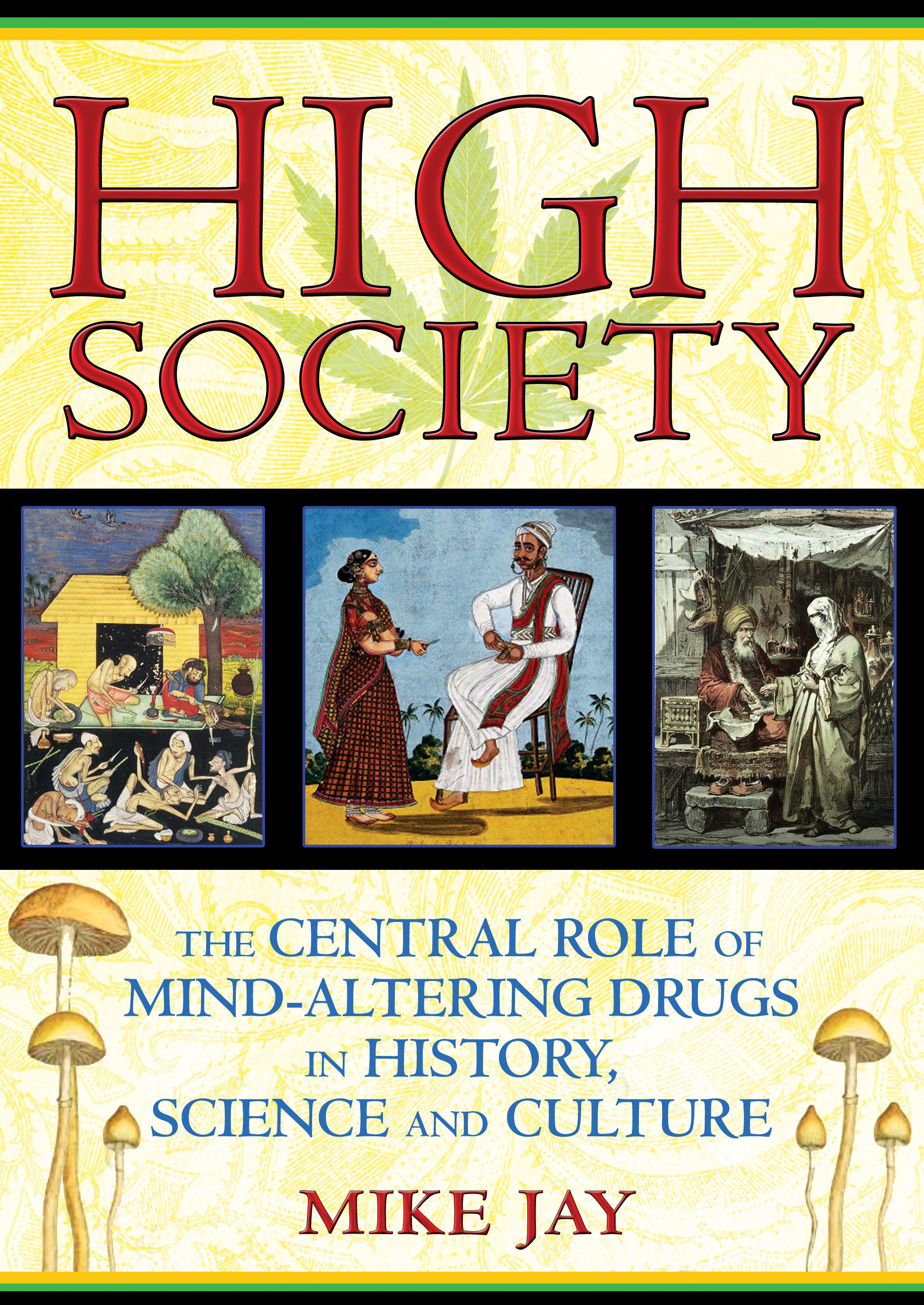 • Featuring artwork from the upcoming High Society exhibition at the Wellcome Collection in London, one of the world’s greatest medical history collections

Every society is a high society. Every day people drink coffee on European terraces and kava in Pacific villages; chew betel nut in Indonesian markets and coca leaf on Andean mountainsides; swallow ecstasy tablets in the clubs of Amsterdam and opium pills in the deserts of Rajastan; smoke hashish in Himalayan temples and tobacco and marijuana in every nation on earth.

Exploring the spectrum of drug use throughout history--from its roots in animal intoxication to its future in designer neurochemicals--High Society paints vivid portraits of the roles drugs play in different cultures as medicines, religious sacraments, status symbols, and coveted trade goods. From the botanicals of the classical world through the mind-bending self-experiments of 18th- and 19th-century scientists to the synthetic molecules that have transformed our understanding of the brain, Mike Jay reveals how drugs such as tobacco, tea, and opium drove the global trade and cultural exchange that created the modern world and examines the forces that led to the prohibition of opium and cocaine a century ago and the “war on drugs” that rages today.

Drugs can bestow remarkable powers, but only to those who are primed to receive them. The hallucinatory derangement of virola snuff will overwhelm anyone who ingests enough of it, but for most it will be recalled (if at all) as a fever dream of fragmentary impressions, dominated by sensations of burning sinuses and overwhelming nausea. It is an intensely personal ordeal, but can only be understood in a social context. Unlike animal intoxication, human drug use takes place within a web of verbal and symbolic culture, and it is here that its meanings reside.

In 1953 Howard S. Becker, a young sociologist and jazz enthusiast, published a now-classic paper entitled ‘Becoming a Marihuana User’. His musical interests had led him to study the lifestyles of New York’s jazz subculture, and he had focused on the practice of smoking cannabis, a habit widespread within his study group but regarded as deviant in the cultural mainstream. He began an informal project of interviewing users to understand how this practice was learned and transmitted.

What Becker discovered was a three-stage model that has since been applied to drug cultures across the world. The first stage, ‘Learning the Technique’, involved the technical challenge of ingesting a sufficient dose of the drug--in this case, learning to inhale correctly, and to hold the smoke in the lungs for a sufficient length of time. But this was not enough to get high in and of itself: most first-time users felt no effects at all. A second stage, ‘Learning to Perceive the Effects’ was essential. This required the user to believe that there were indeed effects to be perceived, and to cultivate a gradual physical recognition of them: head-spinning, rubbery legs or hunger pangs. But even when perceived, it was not obvious to the user that these effects were desirable. The third stage, ‘Learning to Enjoy the Effects’, could only be grasped within a culture where the drug’s effects were valued: light-headedness was a cue for giggling and verbal flights of fancy, hunger pangs led to enjoyable snacking binges, feelings of anxiety or paranoia were acknowledged and soothed with camaraderie and humour.

Becker’s observations challenged the consensus view of 1950s American psychiatry that marijuana users represented a deviant and criminal minority whose aberrant appetites led them to drug use. It was, he argued, the opposite: they had joined a subculture within which drugs became pleasurable. ‘Marihuana use’, he concluded, ‘is a function of the individual’s conception of marihuana and of the uses to which it can be put’. People in straight society shunned marijuana not because they were virtuous, but because there was no reward to be gained from it: even if they felt the effects, they would lack the context in which to enjoy them.

The physical effects of most drugs are initially unpleasant, and would be perceived as toxic unless they were culturally valued, shared and sanctioned. The first glass of beer is unpleasantly sour; the first sip of red wine burns the mouth; the first lungful of tobacco produces coughing, low blood pressure and nausea. Modern drug cultures, by validating the exploration of unfamiliar tastes and mental states, have converted many substances from poison to exotic pleasure. ‘Magic’ mushrooms, for example, are now consumed with the expectation of a colourful and mind-expanding trip, but historical accounts of accidental ingestions show that, without such expectations, their effects were typically taken to be the painful and alarming onset of poisoning. The drug habits of one culture often disgust another, at least until the new drug is socialised and normalised: drugs may be universal, but they are also an acquired taste. Throughout history, the spread of foreign drugs has been socially divisive, eagerly adopted by some and fiercely resisted by others.

But drugs are not always divisive. They can also reinforce cultural values, strengthening and formalising them, often to the point where vital exchanges become inconceivable without them. The role of kava in many cultures across the South Pacific offers a striking example.

Kava is a narcotic drink produced by grinding and soaking the root tubers of Piper methysticum, a large plant of the pepper family. Since it must be drunk fresh, this is a process that consumes a significant proportion of every day. Roots must be rubbed clean with coconut husks, stripped, peeled and shredded--these days usually with an old cheese grater into a plastic bowl, but in the most traditional villages by chewing the root and spitting the macerated pulp into a banana leaf. Although this process appears unhygenic, kavadrinkers rarely catch diseases from one another: in addition to its mind-altering qualities, the root is also anti-bacterial and anti-fungal. The syphilis that spread across the region with Western contact affected kava-drinkers markedly less than their neighbours.

Once prepared, the drink is poured into coconut shells, which are knocked back quickly and cleanly: although kava has an exalted cultural status, it is still not reckoned to taste very nice. It is a muddy, pale brown suspension with a peppery burn and a distinctive numbing effect on the lips and throat. Other effects soon follow: a fullness in the head, a rush of warm feelings and a clumsy, stumbling gait. Sounds become louder and light harsher: it is good manners to whisper among fellow-drinkers, and to dim paraffin lamps. After a few hours of gentle trance, it promotes a sound night’s sleep, making it a better complement to working routines than alcohol. In equally marked contrast to alcohol, which has had destructive effects on many Pacific cultures, kava encourages positive social behaviours such as generosity and sensitivity, cordial conversation and comfortable silence.
Mike Jay

Mike Jay is a leading specialist in the study of drugs across history and cultures. The author of Artificial Paradises, Emperors of Dreams, and The Atmosphere of Heaven, his critical writing on drugs has appeared in many publications, including The Guardian, The Telegraph, and The International Journal of Drug Policy. He sits on the editorial board of the addiction journal Drugs and Alcohol Today and on the board of the Transform Drug Policy Foundation. He lives in England.

“Mike Jay’s book offers an excellently researched account of the changing interface of drug use, social values, international trade and commerce, and cultural conditioning. It makes for a fascinating read for those interested in our long and varied relationship with psychoactive materials and our quest for novelty.”

– Tom Soloway Pinkson, Ph.D., author of The Shamanic Wisdom of the Huichol: Medicine Teachings for Mod

“The fascinating history of mind-altering substances is given an articulate and intelligent treatment in Mike Jay’s intriguing narrative. This is anything but a dry recounting. The intertwined influences of culture, politics, and finance on the history and perception of drug use are chronicled in this well-written and engrossing study.”

“I encourage you to read High Society to get a different perspective; one of research and historical facts before making a decision of what side you are taking. This is a good read and a good knowledge base for further contemplation and personal research.”

“. . . an excellent introduction to the history of drugs: concise, readable, profound in its implications, and beautifully presented.”

“The impressive collection of pictures alone makes this book outstanding. Well illustrated–literally–are the roles drugs play as medicines, religious sacraments, status symbols, and trade goods. This is no dry, academic account, but a colorful, cross–cultural history of people, as well as birds and animals, seeking pain relief, enjoyment, creativity, or enlightenment through plants. It covers centuries of both use and abuse.”