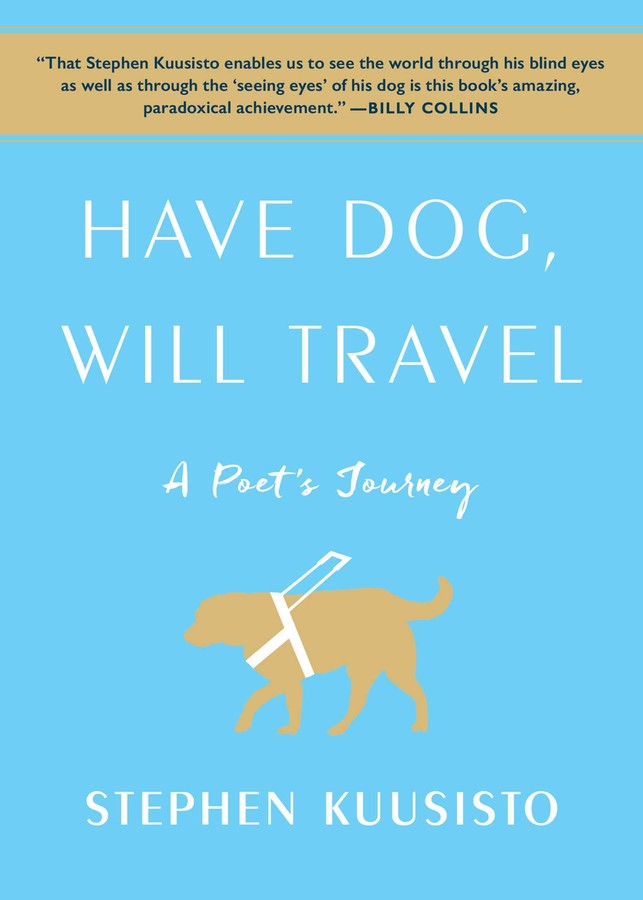 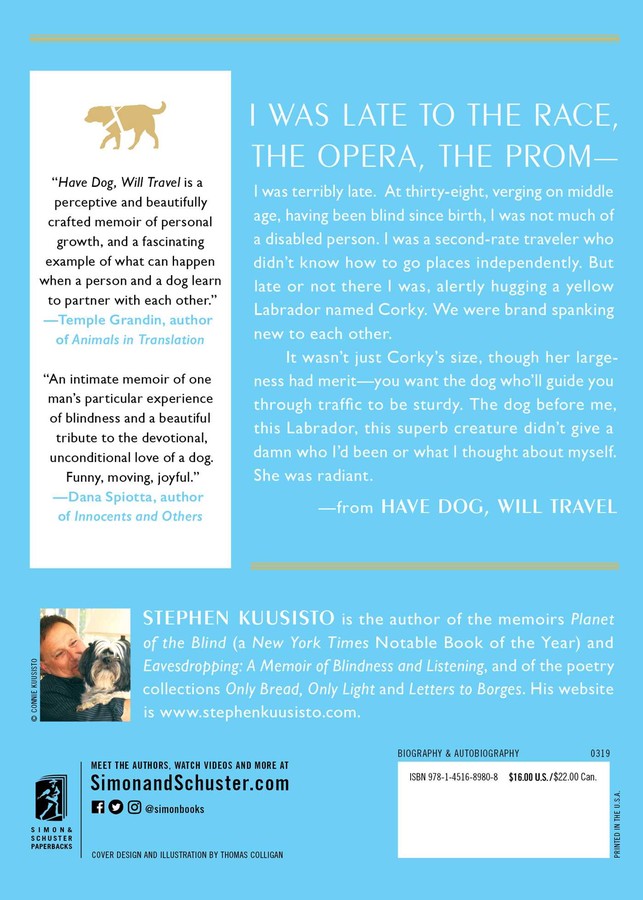 Have Dog, Will Travel
By Stephen Kuusisto
Read by Fred Sanders

Have Dog, Will Travel

By Stephen Kuusisto
LIST PRICE $17.00
PRICE MAY VARY BY RETAILER

In a lyrical love letter to guide dogs everywhere, a blind poet shares his delightful story of how a guide dog changed his life and helped him discover a newfound appreciation for travel and independence.

Stephen Kuusisto was born legally blind—but he was also raised in the 1950s and taught to deny his blindness in order to "pass" as sighted. Stephen attended public school, rode a bike, and read books pressed right up against his nose. As an adult, he coped with his limited vision by becoming a professor in a small college town, memorizing routes for all of the places he needed to be. Then, at the age of thirty-eight, he was laid off. With no other job opportunities in his vicinity, he would have to travel to find work.

This is how he found himself at Guiding Eyes, paired with a Labrador named Corky. In this vivid and lyrical memoir, Stephen Kuusisto recounts how an incredible partnership with a guide dog changed his life and the heart-stopping, wondrous adventure that began for him in midlife. Profound and deeply moving, this is a spiritual journey, the story of discovering that life with a guide dog is both a method and a state of mind.

Have Dog, Will Travel Chapter One
I was late to the race, the opera, the prom—whatever you want to call it. I was terribly late. At thirty-eight, verging on middle age, having been blind since birth, I was not much of a disabled person. I was a second-rate traveler who didn’t know how to go places independently. But late or not there I was, alertly hugging a yellow Labrador named Corky. We were brand spanking new to each other. We were an arranged marriage. We’d been together all of fifteen minutes.

It wasn’t just Corky’s size, though her largeness had merit—you want the dog who’ll guide you through traffic to be sturdy. No, the “thing”—the ineffable “it,” the “should”—was something like a welcome word. Maybe the word came from a distant room; the word had traveled a long way. So what if I’d been an unsuccessful disabled traveler? The dog before me, this Labrador, this superb creature didn’t give a damn who I’d been or what I thought about myself. She was radiant.

Disability has numerous implications. One can live a long while recognizing only some of them. In the 1950s my parents couldn’t imagine a future for me if I presented as blind. They forcefully encouraged me to do absolutely everything sighted children did, minus any acknowledgment of my difference. In the spring of 1961 my mother signed me up for the Durham, New Hampshire, Cub Scout troop and bought me a uniform and a flag. I marched in the Memorial Day parade, stepping in time to Boy Scout drummers. I held that flag straight before me and walked in a gorgeous gold mist, which was how my brand of blindness transmitted the world. I was legally blind. I saw colors and shapes.

“Who am I?” should always be answered by acknowledging physical life as much as say, knowing one’s ancestry. But in 1961 a Boy Scout parade wasn’t the place to learn about disability dignity and pedigree. The scouts’ handbook didn’t have a chapter about successful blind people.

I found it was best to not think about blunted sight—that’s how it was. And I had help with my repression. None of the grown-ups in my life admitted disability. They’d come of age in the 1940s watching newsreels. In a famous (or infamous) short produced by the March of Dimes called The Crippler unsuspecting children were abducted by polio, who lurked as a menacing shadow—infantile paralysis was a molester at the playground’s edge. My parents thought disabled kids were victims of a nearly unimaginable fate, a predatory darkness. Against this tragedy stood only human will.

There was a blind World War II veteran who lived a block from our house. My parents always referred to him as “the Blind Man” with tones of sadness and piety. The meaning was clear. I mustn’t display vision loss, ever, for doing so would make me a victim of the Crippler. By today’s standards this may seem quaint, but then again, even now I receive enough mail to know the story is still common. Many people across the globe still feel they must hide their disabilities.

We arrive at self-awareness according to thousands of influences. It took me years to see I wasn’t a victim of a shadowy Crippler and that my parents’ ideas about blindness were immaterial. In the twenty-first century self-determination for the disabled has grown from a nascent concept to a global movement. From Africa to Asia, Europe to the Middle East, disability activists are calling for their rights and living their lives in accord with the best principles of independence and empowerment—educating others, assisting their sisters and brothers, demanding opportunities for children, health care, freedom to travel . . . just to name the basics. The passage of the Americans with Disabilities Act in 1990 helped create international opportunities for dialogue between the disabled and served to incite a worldwide confrontation with outdated cultural assumptions.

Now at Guiding Eyes for the Blind, I had Corky’s large paws on my shoulders. 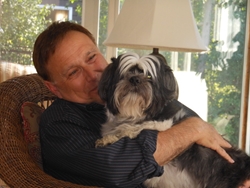 Stephen Kuusisto is the author of the memoirs Have Dog, Will Travel; Planet of the Blind (a New York Times “Notable Book of the Year”); and Eavesdropping: A Memoir of Blindness and Listening and of the poetry collections Only Bread, Only Light and Letters to Borges. A graduate of the Iowa Writer’s Workshop and a Fulbright Scholar, he has taught at the University of Iowa, Hobart and William Smith Colleges, and Ohio State University. He currently teaches at Syracuse University where he holds a professorship in the Center on Human Policy, Law, and Disability Studies. He is a frequent speaker in the US and abroad. His website is StephenKuusisto.com.

“Kuusisto…give[s] readers and animal lovers terrific insight into not only his experience with blindness, but also the unshakable bond between a guide dog and its owner.”—Publishers Weekly

"Never before has the subtle relationship of a blind person to a guide dog been clarified in such an entertaining way. That Stephen Kuusisto enables us to see the world through his blind eyes as well as through the ‘seeing eyes’ of his dog is this book's amazing, paradoxical achievement."—Billy Collins, U.S. Poet Laureate (2001-2003)

“A perceptive and beautifully crafted memoir of personal growth, and a fascinating example of what can happen when a person and a dog learn to partner with one another.”—Temple Grandin, author of Animals in Translation and Animals Make Us Human

“Have Dog, Will Travel is both an intimate memoir of one man’s particular experience of blindness and a beautiful tribute to the devotional, unconditional love of a dog. Funny, moving, and joyful.”—Dana Spiotta, author of Innocents and Others

“I fell in love with Corky, of course, with her goofiness and boundless affection and heart-stopping wisdom. Truth be told, I fell in love with Steve too for how he dove into his new, broken open, adventurous life with her, and the way he processed his experiences through the lens of his reading life, and his compassion for others and for his own late-blooming self.”—Ona Gritz, author of On The Whole: A Story Of Mothering And Disability

"A celebration of Corky and guide dogs everywhere."—Library Journal

"Kuusisto tells the poignant story of a midlife rebirth that led to self-acceptance and also celebrates human/animal interdependence and a “companionship [that] was intimate and richer than poems.” An eloquent and heartwarming memoir."—Kirkus Reviews


"[An] irresistible portrait of his first guide dog, Corky...Kuusisto’s ever-lyrical writing pulses with lush imagery and unflagging curiosity. There’s no doubt: Kuusisto’s love for Corky, and love itself, become a filter through which to perceive the world—and what a deeply compassionate, beautifully observed world it is." —Booklist

Have Dog, Will Travel

By Stephen Kuusisto
LIST PRICE $17.00
PRICE MAY VARY BY RETAILER