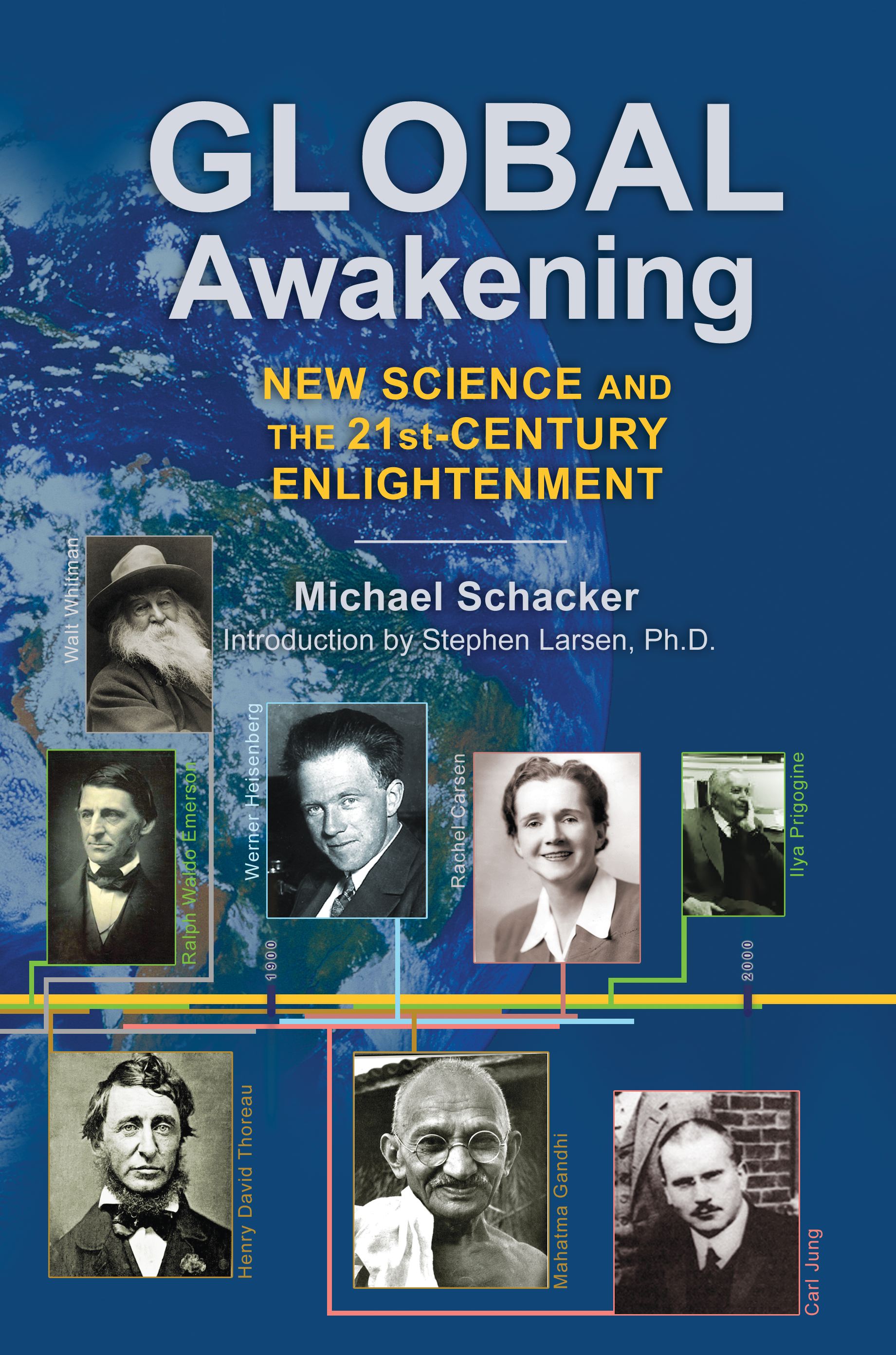 New Science and the 21st-Century Enlightenment

• Reveals the distinct stages of paradigm shifts through the ages, including the 18th-century Enlightenment and the critical stage of our current shift

• Explains how the new organic worldview began with Goethe and Kant

In Global Awakening, Michael Schacker shows that hidden within our global crises is a positive future for the planet. Sharing his 30 years of intensive research into the history of change as well as the evolution of consciousness and regenerative science, Schacker explains how our current shift from the old mechanistic worldview to a new organic worldview based on biological models follows the same pattern as other paradigm shifts across history, including the 18th-century Enlightenment and the American Revolution. He reveals the creative geniuses who have contributed to the birth of the organic worldview, beginning with Goethe, Kant, and Hahnemann. Exposing the scientific and social forces that drive paradigm shifts, he details the stages every paradigm shift progresses through: the early Enlightenment, the conservative backlash, the intensive phase, and and the transformational phase leading to the Organic Shift.

Explaining that we are currently in the throes of the paradigm flip, the critical last phase of our paradigm shift, Schacker shows how the mechanistic worldview is crumbling around us and nothing but a complete transformation in the way we think will keep us from the path of total self-destruction. Providing a map to overcome the allure of the simplistic mechanical model that has spawned countless unsustainable practices and problems--from global warming to intense economic disparities--the author offers concrete solutions showing how each of us can use our talents, skills, and time to make the deep changes needed for global regeneration.

Kant said there were two kinds of people: homo phenomenon, or Natural Man; and homo noumenon, Moral Man. Homo phenomenon is the initial, natural state of human awareness. He described Natural Man as being surrounded by a series of mental concentric circles--circles that increasingly limit thought. Homo phenomenon, said Kant, thinks first of his family, his job, his house, his horse, and then in a vague sense, his neighborhood, town, and nation--and in almost no sense does he consider the world.

Homo phenomenon is easily swayed by appearances and is prey to the allure of consumerism and the drumbeat of nationalism and war. Thinking for himself is almost never attempted. Nor does homo phenomenon want to change. For example, homo phenomenon may give lip service to whole concepts, the ideas of god and morality. Yet there is an aversion to really exploring the true nature of anything. It’s part of the spell spun by the material things around us, like a circle of enchantment. Homo phenomenon cannot get past the circles and so does not know the wholes that exist.

In contrast, homo noumenon has broken through the magic circle of material things and lives a life full of meaning and purpose. Rather than looking from the “inside-out,” they think first of the whole and work their way back to the level of the individual. They not only understand the concept of noumena--that which is mysterious and unknowable--they can experience the unknowability of it all in a mystical state, a union with the whole. According to Kant, homo noumenon is enlightened, realizing that although a person can never know the whole directly, they can feel it through their heart. The head is, after all, little use in the case of the unknowable. Becoming aware of the noumena is therefore the foundation of the broader awareness of the organic worldview.

Kant’s definition of people into homo phenomenon or noumenon is not elitism, for the broader, progressive awareness is the truly inclusive mind-set, one that wants to lift up the rest of the world through regenerative science and grassroots community development. It is the conservative and mechanists that are elitist and wish to maintain the status quo and leave control in the hands of the few.

It is a natural step for the next paradigm to take, to possess the global view of the homo noumenon. Yet how does one become so “enlightened”? How can we, according to the old professor, develop our own understanding and reach this state?

In one essay Kant explains that the way from the state of homo phenomenon outward to the enlightened state of homo noumenon means daring to think for yourself, to be brave enough to throw off all the programming, all the education and “tutelage” of institutions. His phrase Sapere Aude!--“Dare to Know!”--is from his essay What Is Enlightenment.

Enlightenment is man’s release from his self-incurred tutelage. Tutelage is man’s inability to make use of his understanding without direction from another. Self-incurred is this tutelage when its cause lies not in lack of reason but in lack of resolution and courage to use it without direction from another. Sapere aude! “Have courage to use your own reason!”--that is the motto of enlightenment.

Laziness and cowardice are the reasons why so great a portion of mankind, after nature has long since discharged them from external direction nevertheless remains under lifelong tutelage, and why it is so easy for others to set themselves up as their guardians. It is so easy not to be of age. If I have a book which understands for me, a pastor who has a conscience for me, a physician who decides my diet, and so forth, I need not trouble myself. I need not think, if I can only pay--others will easily undertake the irksome work for me. . . .

For any single individual to work himself out of the life under tutelage which has become almost his nature is very difficult. He has come to be fond of his state, and he is for the present really incapable of making use of his reason, for no one has ever let him try it out.

Most people think of enlightenment as something one would find in a far-off Asiatic land from a guru or Zen master. Yet to be enlightened, said Kant, we must actually learn to think for ourselves. We must free ourselves from the grip of the shallow absolutisms that pass for science, philosophy, and politics. Then, with your own deep look at the world, you can walk on your own and make your own map of the world. That is true awakening. Kant himself had his own map. He said that every living thing has a purpose--that trying to understand the purpose must be the first goal when studying something biological.

What does being an enlightened homo noumenon mean, then, in terms of purpose? What is our individual purpose? He explains that, in the end, our individual purpose is tied to our collective purpose. Rather than wasting time and precious resources in the unconscious pursuit of war, we are here to attain a state of world peace--so that humanity can develop to its full potential. Making the change from homo phenomenon to homo noumenon is key to making it all happen.
Michael Schacker

Michael Schacker is an investigative science writer and cofounder of the Global Regeneration Network. A strategic consultant and writer in the field of regenerative agriculture, he is the author of A Spring Without Bees. He lives in Woodstock, New York.

“Take the time to read Global Awakening and once you have digested its magnificent context and contents, consider sharing it with your friends and networks and spread the word. The book provides a very real sense of our place in the transformation of culture that holds the promise of reclaiming the world from those who have taken it hostage. The time to act is now, and Global Awakening belongs in the library of every awakened activist.”

“Global Awakening is just what is needed right now: a penetrating analysis of the historical context of our current global crisis, plus the all-important--and hitherto missing--plan of how we get to where we want to be. This is the book the ‘organic’ movement has been waiting for and, I hope and trust, will embrace as its blueprint for the future. It is as important as Silent Spring and as prescient: a must-read for anyone struggling with the question of how to engage with the world in a positive and productive way.”

“Michael Schacker’s book reveals the hidden history of great thinkers and change-makers along with progressive solutions for the here and now. This truthful and positive book could have powerful and far-reaching effects and will benefit anyone who reads it.”

New Science and the 21st-Century Enlightenment