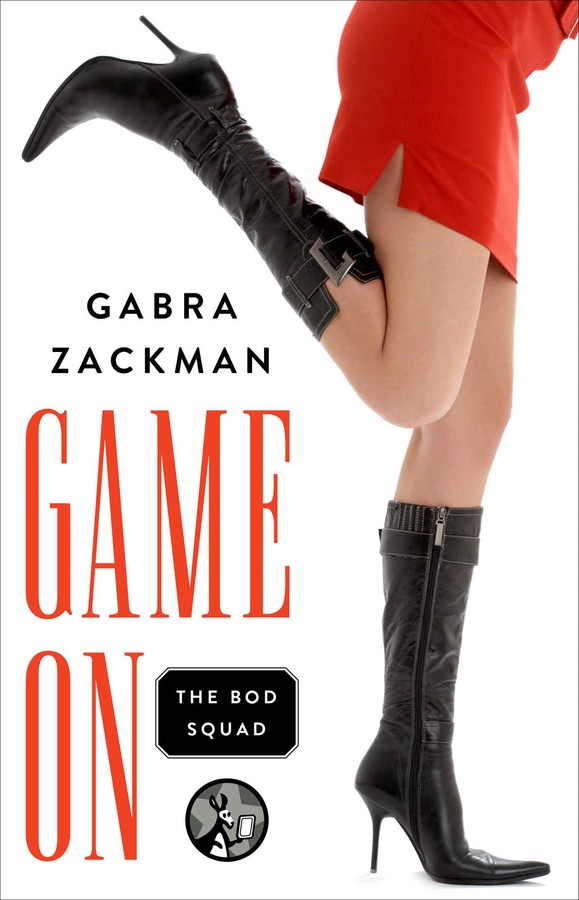 Book #1 of The Bod Squad Series
By Gabra Zackman
LIST PRICE $4.99
PRICE MAY VARY BY RETAILER

From Washington, DC, to Paris, Legs is tailing Charles Oakley Palmer III, a white-collar criminal she’s determined to bring to justice. But will romance or betrayal blossom along the way? Find out in the first in a sizzling new series about a team of highly skilled investigators who go undercover to catch criminals—while juggling romance, world travel, and danger around every corner.

SUSANNAH CARTER STEPPED OUT of the limo and looked up at the Greenwich Village town house alight with the sounds of the party within. She was dressed to the nines, all five feet nine inches of her long sleek frame suctioned into a dress she would blush to show her mother. Thankfully, her mother was in Virginia, and she would never know her daughter wasn’t in DC, on Capitol Hill, where she was supposed to be. Her job demanded discretion, first and foremost. And if she wasn’t discreet in the dress she wore . . . well . . . it was what she jokingly called job security.

The driver’s-side window rolled down, and the chauffeur smiled at her. He was a fine-looking man, dark skin, dark hair, and his hazel eyes sparkled with mischievous delight. “Lookin’ good, Susie Q.” He chuckled. “You gonna be able to walk in those heels?”

“Shove it, Jackson,” Susannah retorted. “You come near me and I’ll make sure you get a heel in just the right place.”

Susannah took one step toward the window, and Jackson began to laugh. “Okay, okay . . . mercy, baby, you know I’m no match for you!”

“You remember all the deets? Or do I have to go over it again?”

“Yes, I remember ‘the deets’!” she snarled. “How many times have we done this, for fuck’s sake?”

Jackson gave her a wry smile. “Still. Bossman’s orders. Say it to me.”

“Oh, fuck off.” Susannah sighed. “All right. I never go off headset. We always rendezvous at the appointed hour unless there’s an emergency. I never try to do anything we haven’t discussed. You never interrupt me for any reason unless I am in danger. I never use the code unless I am in a code 5. And I never give my real name.”

Jackson rubbed a hand over his grizzled chin. “And?”

He paused for effect. “And you never get personal.”

“Yes,” she grumbled, “I know. I never get personal. Unless it’s you, sweet Jackie.”

“Yeah, neither do I. But hopefully this’ll be a one-shot deal.”

“From your lips—” Jackson began.

“See you later, kid.” He rolled up the window and drove off into the New York night.

Susannah took a minute to review her intel. She took out her cell and clicked on the private-file page of her company’s website. Her phone was outfitted with a data transmitter that allowed only her, her boss, and Jackson to open this particular file. She had worked for the company for ten years, ever since she graduated from Georgetown. She was headhunted at a frat party by John Collins Boss, the head of her company, who everybody referred to as Bossman or the Boss. The Boss had also gone to Georgetown and had graduated a few years earlier; he had come back that day to give a lecture to seniors on starting their own businesses. After a bunch of wicked banter and several vodka tonics, he asked if she’d be interested in going undercover. She was just drunk enough to mistake that for “under covers,” and they had a torrid two-week love affair. After the affair was over, he asked again. She accepted. And it had been her job ever since. She and the Boss managed to find just the right working relationship: their initial intimacy made it possible for them to be open in every way imaginable.

She clicked on the file marked “Rosebud” and smiled. The Boss had a peculiar love of the classics, and always worked one of them into the file name. He had called this one Rosebud in the hopes that somewhere in this guy’s Citizen Kane past would be a key to how he ticked. Or why the fuck he was so elusive, so off grid, and so goddamn slippery.

She accessed the data using her own password, “Legs32,” and an icon of Jessica Rabbit that Bossman thought was her ideal avatar. Maybe it was her deep red hair—she actually was a natural redhead but dyed it a darker shade—or the way she looked in a minidress, or the fact that she carried two pistols. Truth was, despite the sex-kitten looks, she was really one of the boys. The only tricky part of an evening like this was not the task at hand, or the false identity, or the danger—the rough part was walking in six-inch stilettos on a cobblestone street. So she leaned on the railing to steady herself and read up on Bossman’s notes about tonight’s mark.

Charles Oakley Palmer III. Goes by Chas. CEO of PalmStar Equities. Has a way with computers and large sums of money and an even greater way with the ladies. Careful, Legs. This may be too much even for you.

She snickered, reading it. The Boss of all people knew how much she loved a challenge.

Grew up in New York, the son of wealthy parents. Mother died when he was a teenager, and his father died not long after. He wound up living by himself with a nanny in the lovely town house you’re about to party at. Don’t get too excited, Legs. He’s not a superhero, even though he fits the profile.

But then, if he was wearing his cape, how would you get to swoop in wearing yours?

Here are the goals for tonight: get in and get in good. We want him coming after you. If you can download the contents of his phone, do it. If you can find his computer, do it. If you can rifle through files, do it. But beware: this man is as sharp as a tack. The FBI and the CIA have thrown their hands up. And this is our big chance to enter a whole different realm. White-collar, Legs. Big money. You get something incriminating on this guy, and maybe you can buy that Corvette you’ve been dreaming of. Yes, I go through your Internet search history. Remember, I own the place. But really, Legs, a Corvette? That’s so 1980s.

Attached you’ll find the crimes he’s been associated with over the past ten years or so . . . he’s come out clean as a whistle on every single one. But it’s widely suspected that he’s the reason the whole thing came off without a hitch. He’s brilliant, Legs. And damn good at his job. If you weren’t sexy AND a fierce operative, I’d never even think of putting you near him. Your computer skills leave something to be desired. But I think you may be our only chance.

The corner of her mouth tilted up as she said, “You’re damn right I am.”

One more thing. He likes the tall ladies. So pull the skirt up. And may the force be with you.

The entry ended with a graphic that was Bossman’s own avatar, a Humphrey Bogart still from Casablanca with Bossman’s best film noir face superimposed on top.

Susannah scrolled through the list of Charles Oakley Palmer III’s “supposed” associates and let out a low whistle. “Wow, Chas. You don’t play small, do you? Damn. You’ve been involved in every single great heist since 2002. Shit.” The crimes were spread out over a tremendous terrain: art, finance, real estate. What the books would call a multidisciplinary criminal and what the Boss would call an equal opportunity player. All big money. All very elite. All cleanly and carefully done. And apparently the linchpin was one man. One very computer-savvy, very wealthy, and—if the pictures were accurate—very sexy bachelor. This was Susannah’s wheelhouse, and she felt her heart begin to beat with the anticipation of hot pursuit.

Turning toward the town house, she put her phone in her purse and pulled her skirt up a few inches, though it didn’t really have a few inches to go. As she pulled it up, she revealed the tip of her .380 strapped around her inner thigh. Furrowing her brow and wondering when the fuck someone’d make a decent thigh holster, she bent over. Her hands were between her thighs, trying to adjust the new holster her fave coworker, Lisa Bee, had given her for Christmas. Lisa Bee was a lot shorter and always on the hunt for the holster that was both practical and still feminine. Notably, there weren’t a lot of these in the world. Lisa Bee had gotten one for herself with a bumblebee engraved in the leather and had given Susannah one with a pair of legs as the insignia. It was pretty user-friendly. But still a pain in the ass.

“May I help you?” a deep, amused voice breathed from over her left shoulder.

She snapped up in alarm, furious to be caught bent over in the street with her hands in her crotch. Shimmying her skirt back down a bit, she turned around in a huff, exploding with, “Why don’t you mind your own fucking business, asshole, before I—”

And he was much better-looking than his pictures gave him credit for.
Gabra Zackman

Gabra Zackman knows romance. Her clever and “thrilling romantic caper” (Library Journal) Bod Squad series was inspired by the more than one hundred romance and women’s fiction titles she has narrated for audio. She divides her time between her native New York City and Denver, Colorado.

Game On is a thrilling romantic caper filled with double crosses, gadgets, and just the right amount of heat.

Book #1 of The Bod Squad Series
By Gabra Zackman
LIST PRICE $4.99
PRICE MAY VARY BY RETAILER

More books in this series: The Bod Squad Series