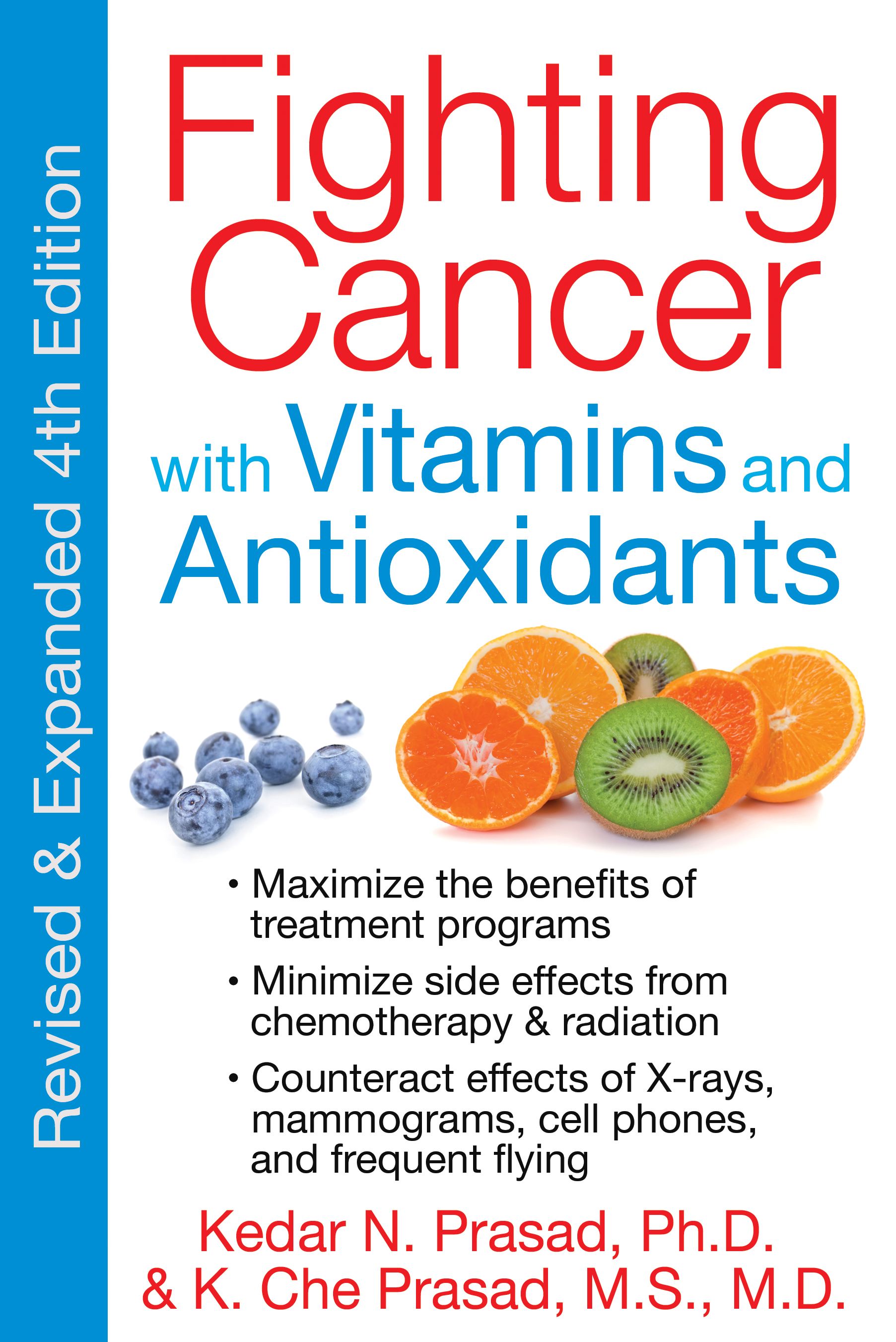 • Shows how to counteract the carcinogenic effects of dental X-rays, CT scans, mammograms, cell phones, and other unavoidable hazards of modern life

Despite extensive research and the development of new treatments and drugs, the U.S. mortality rate from cancer has not changed during the past several decades. Yet there are promising nutritional ways of avoiding and even beating cancer. In this completely revised and expanded edition, leading anticancer researcher Kedar N. Prasad and doctor K. Che Prasad reveal the latest revolutionary discoveries in the use of antioxidants and micro-nutrients to prevent and treat cancer--and also help with heart disease, Alzheimer’s, and Parkinson’s.

Providing a simple nutritional program to follow, the authors show how micro-nutrients, vitamins, and antioxidants can enhance the beneficial effects of conventional cancer treatments, decrease their toxic side effects, improve long-term prognosis, and reduce the risk of new cancer. Explaining how antioxidants regulate gene expression and cancer heredity, the authors detail how to counteract the risks of dental and medical X-rays, CT scans, mammograms, cell phones, frequent flying, and other unavoidable hazards of modern life; reduce the oxidative stress of free radicals in the blood; and decrease chronic inflammation. Reviewing recent studies, they deflate the controversies surrounding the use of antioxidants in cancer treatment, revealing everything from the reason why many vitamins in foods are destroyed during storage to the surprising role of selenium in cancer prevention.

Although most nutrition scientists agree with the idea that changes in the diet and lifestyle may reduce the risk of cancer, the value of micronutrients, including antioxidants, in cancer prevention or treatment remains controversial and the subject of extensive debate. As a result, a number of misconceptions concerning the value of supplementary
micronutrients exist among the general public and most health professionals. In an effort to reduce confusion, we will look at the facts behind some of these misconceptions.

Misconception: Supplementary micronutrients including antioxidants are not useful for cancer prevention.

Fact: The above belief is propagated by the results of a human clinical study in which a single micronutrient, such as beta-carotene, was administered orally once a day for several years to individuals at high risk of developing cancer (such as heavy cigarette smokers). The results showed that the incidence of lung cancer and other cancers increased in the beta-carotene treated group compared to those who did not receive beta-carotene. However, the use of one antioxidant alone in a high-risk population has no scientific merit for the following reasons: (a) heavy cigarette smokers have a high oxidative environment in their bodies; and (b) a single antioxidant, such as beta-carotene, will be damaged in such an environment and then will act as a pro-oxidant (free radical) rather than an antioxidant. The results obtained from the use of a single antioxidant should not be extrapolated to the effects possible by the use of multiple antioxidant preparations in which other antioxidants will prevent conversion of one antioxidant to a pro-oxidant. There are many laboratory studies and a few human studies that indicate that many supplementary micronutrients are essential in lowering the risk of cancer.

Misconception: Most supplementary micronutrients, including antioxidants, pass out of the body in the urine and feces, so why take them?

Fact: While it is true that consumption of high doses of micronutrients can lead to increased levels of these products in the urine and feces, the beneficial actions of micronutrients are notably performed during the digestion of food. The absorption from the intestinal tract of most orally ingested antioxidants at moderate doses is about 10 percent; however, the presence of the remaining amounts of antioxidants in the intestinal tract perform very important beneficial functions. For example, increased amounts of vitamin C and vitamin E (alpha-tocopherol) are needed in the stomach to prevent the formation of nitrosamine, a potent cancer-causing agent, that is formed from nitrite-containing foods, such as bacon, sausage, hot dogs, or cured meat. These antioxidants can reduce the levels of mutagens that alter genetic activity and increase the risk of cancer formed during digestion in the intestinal tract. Antioxidants produce beneficial effects in the body even without being completely absorbed.

Misconception: It is not possible for antioxidants to protect against damage produced by different types of harmful agents, such as radiation, toxic chemicals, and pathogenic viruses and bacteria.

Fact: Radiation (such as X-rays, gamma rays) and certain toxic chemicals (such as mustard gas and chlorine gas) cause most damage to cells by producing excessive amounts of free radicals and acute or chronic inflammation. Among known prescription and nonprescription drugs, antioxidants are the only group of nutrients that can destroy free radicals, decrease acute and chronic inflammation, and stimulate immune function.

Misconception: The more supplementary micronutrients, including antioxidants, you take, the better you will feel.

Misconception: The presence of trace minerals--such as iron and copper--in many multiple-vitamin preparations containing vitamin C is good for your health.

Fact: Your body needs tiny amounts of these trace minerals for growth and survival. These amounts can easily be obtained from the Western daily diet. The body has no significant way of getting rid of these minerals once they enter the body, so the addition of iron, copper, or manganese in any multiple-vitamin preparation is not optimal for long-term health. It is well established that vitamin C in combination with iron or copper (and less so with manganese) generates excessive amounts of free radicals that can damage cells and/or reduce the effectiveness of vitamins. In addition, the absorption of these trace minerals in the presence of vitamin C is enhanced markedly in the intestinal tract, which can increase the body’s storage of minerals such as iron. Increased storage of free iron (not bound to proteins) in the body can increase the risk of cancer, heart disease, and some neurological diseases such as Parkinson’s disease.

Misconception: A balanced diet is sufficient for optimal protection against cancer.

Fact: Although a balanced diet is a necessary part of any cancer-prevention plan, it may not be adequate for optimal protection for the following reasons: (a) the concept of balanced diet is not well defined; (b) trying to obtain the optimal levels of antioxidants such as vitamins A, C, and E and beta-carotene through a balanced diet only may not be possible or practical; (c) optimal levels of endogenous antioxidants such as glutathione, alpha-lipoic acid, and coenzyme Q10 cannot be obtained from a balanced diet; and (d) all foods that we consume on a daily basis contain both protective and toxic substances. To maximize the intake of protective substances and for maximum protection against cancer, supplementary micronutrients, including dietary and endogenous antioxidants, should be combined with a healthy diet and changes in lifestyle in consultation with your doctors and health care professionals.

Kedar N. Prasad, Ph.D., is the chief scientific officer of the Premier Micronutrient Corporation, the former director of the Center for Vitamins and Cancer Research at the University of Colorado School of Medicine, and the former president of the International Society of Nutrition and Cancer. He lives in the San Francisco Bay area.

K. Che Prasad, M.S., M.D., is director of microbiology and codirector of cytology at Marin Medical Laboratories. He lives in the San Francisco Bay area.

“I highly recommend this book if you want to get up to speed on the science of micronutrient supplementation without reading an academic tome. The authors provide reliable and current science with clarity and in easily digestible chunks. The layout in sections and subsections makes it easy to read, and the graphs and charts provide summaries that will help you make personal decisions about how supplementation can enhance your wellness program.”

“Dr. Prasad’s book is a comprehensive and fascinating review of current cancer therapies and the controversies surrounding them. His extensive research has made him one of the leading and respected authorities in the field of antioxidant use during cancer treatment.”

“A useful and well-organized antidote to the mass of irresponsible information about vitamins. I applaud Dr. Prasad for providing the public with a responsible presentation.”