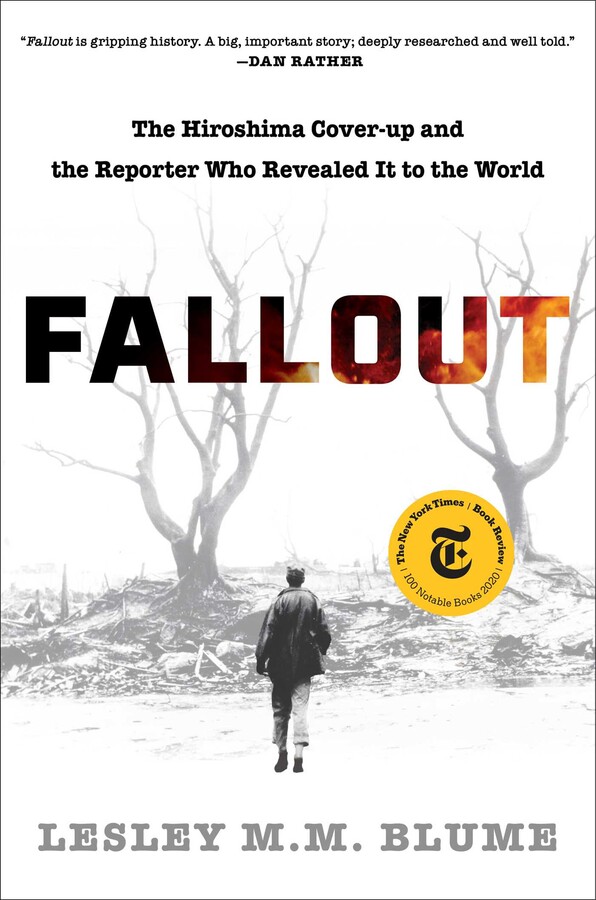 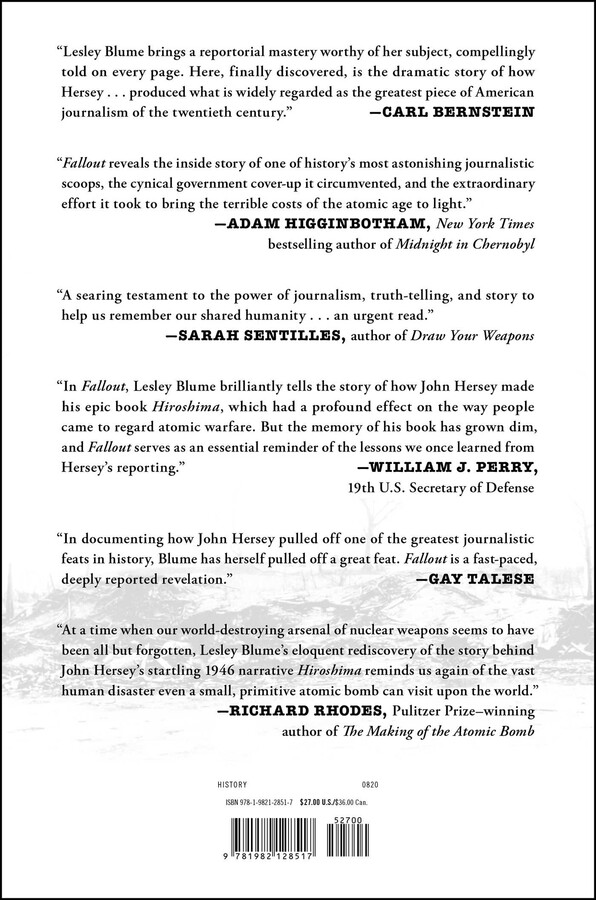 Just days after the United States decimated Hiroshima and Nagasaki with nuclear bombs, the Japanese surrendered unconditionally. But even before the surrender, the US government and military had begun a secret propaganda and information suppression campaign to hide the devastating nature of these experimental weapons. The cover-up intensified as Occupation forces closed the atomic cities to Allied reporters, preventing leaks about the horrific long-term effects of radiation which would kill thousands during the months after the blast. For nearly a year the cover-up worked—until New Yorker journalist John Hersey got into Hiroshima and managed to report the truth to the world.

As Hersey and his editors prepared his article for publication, they kept the story secret—even from most of their New Yorker colleagues. When the magazine published “Hiroshima” in August 1946, it became an instant global sensation, and inspired pervasive horror about the hellish new threat that America had unleashed. Since 1945, no nuclear weapons have ever been deployed in war partly because Hersey alerted the world to their true, devastating impact. This knowledge has remained among the greatest deterrents to using them since the end of World War II.

Released on the 75th anniversary of the Hiroshima bombing, Fallout is an engrossing detective story, as well as an important piece of hidden history that shows how one heroic scoop saved—and can still save—the world.

Lesley M.M. Blume is a Los Angeles-based journalist, author, and biographer. Her work has appeared in Vanity Fair, The New York Times, The Wall Street Journal, and The Paris Review, among many other publications. Her last nonfiction book, Everybody Behaves Badly, was a New York Times bestseller.

Selected as one of Vanity Fair’s best books of 2020

"Lesley Blume brings a reportorial mastery worthy of her subject, compellingly told on every page. Here, finally discovered, is the dramatic story of how Hersey . . . produced what is widely regarded as the greatest piece of American journalism of the 20th century."—Carl Bernstein

"Blume [is] a tireless researcher and beautiful writer, who moves through her narrative with seeming effortlessness — a trick that belies the skill and hard labor required to produce such prose . . . Fallout is a warning without being a polemic . . . a book of serious intent that is nonetheless pleasant to read. There are knowable reasons for this, including Blume’s flawless paragraphs; her clear narrative structure; her compelling stories, subplots and insights"                                           —William Langewiesche, The New York Times

"Gripping ... Blume’s meticulously researched tale of the lengths to which a government will go to keep the truth from reaching its citizens might be exactly what everyone should be reading at this deeply worrisome juncture." —The Washington Post

“Journalism at its finest … Blume’s tight, fast-moving book, pegged to the 75th anniversary of the bombing, tells Hersey’s story as he raced to gather sources, wrote in absolute secrecy, and then published a deeply empathetic, almost unbelievably distressing article.” —Bloomberg

“Fallout reveals the inside story of one of history’s most astonishing journalistic scoops, the cynical government cover-up it circumvented, and the extraordinary effort it took to bring the terrible costs of the atomic age to light.”—Adam Higginbotham, New York Times Bestselling author of Midnight in Chernobyl

“A searing testament to the power of journalism, truth-telling, and story to help us remember our shared humanity … an urgent read.”—Sarah Sentilles, Author of Draw Your Weapons

"In Fallout, Lesley Blume brilliantly tells the story of how John Hersey made his epic book “Hiroshima,” which had a profound effect on the way people came to regard atomic warfare. But the memory of his book has grown dim, and Fallout serves as an essential reminder of the lessons we once learned from Hersey’s reporting."—William J. Perry, 19th U.S. Secretary of Defense

"In documenting how John Hersey pulled off one of the greatest journalistic feats in history, Blume has herself pulled off a great feat. Fallout is a fast-paced, deeply reported revelation."—Gay Talese

"At a time when our world-destroying arsenal of nuclear weapons seems to have been all but forgotten, Lesley Blume’s eloquent rediscovery of the story behind John Hersey’s startling 1946 narrative Hiroshima reminds us again of the vast human disaster even a small, primitive atomic bomb can visit upon the world."—Richard Rhodes, Pulitzer Prize-winning author of The Making of the Atomic Bomb

“For months after the bombing of Hiroshima and Nagasaki, Americans were told little about the devastating effects on survivors. Blume’s magisterial account of how John Hersey broke the story in the New Yorker is also a warning about the ever-present dangers of nuclear war.” —The New York Times Book Review (Editor’s Choice)

"Blume uncovers the fascinating backstory to perhaps the most influential piece ever published by an American magazine: John Hersey’s 1946 report on the atomic bombing of Hiroshima... [Her] narrative never flags in its drama."—Kirkus (Starred Review)

"This enthralling, fine-grained chronicle reveals what it takes to cut through “dangerously anesthetizing” statistics and speak truth to power."—Publishers Weekly (Starred Review)

“[A] cliff-hanging saga of an intrepid young newsman outplaying his own government to get the facts.” —The Wall Street Journal

“Fallout gives powerful insights into the way that a government can weave a story to justify the actions it takes, and also into the fearless reporting about what really happened in Hiroshima. Blume’s tireless reporting gives important context to an understudied slice of U.S. history.” —Christian Science Monitor

"Dive into this thrilling account...Blume skillfully reconstructs the players involved and the hidden history of one of the greatest cover-ups in modern history." —Town & Country

“A brilliantly conceived and impeccably researched book … Fallout should sit next to [Hersey’s Hiroshima] on the shelf as a testament of the courage of a free press to report the truth no matter who attempts to silence their mission.” —New York Journal of Books

“[Fallout is] engagingly told and painstakingly researched, with an unerring eye for the vivid detail that brings to life postwar society and the stakes of making the world understand the true horror of nuclear fallout. Blume's history will remind readers of the vital role the fourth estate plays in upholding American ideals." —Booklist

“Fallout is an all-too-vivid and...all-too-accurate account of how New Yorker journalist John Hersey's essay, ‘Hiroshima,’ was created … Blume’s work, like Hersey’s, is a testament to the power of fine journalism. She brilliantly recreates his fragile position as the ultimate whistleblower, as well as his earth-shaking reporting.”—Bookreporter.com

“This account of the cover-up, including the US denial of the bomb’s radioactive aftermath, and the Trojan-horse tactics Hersey employed to slip under the censorship radar, is as riveting as it is disturbing.” —The Sydney Morning Herald