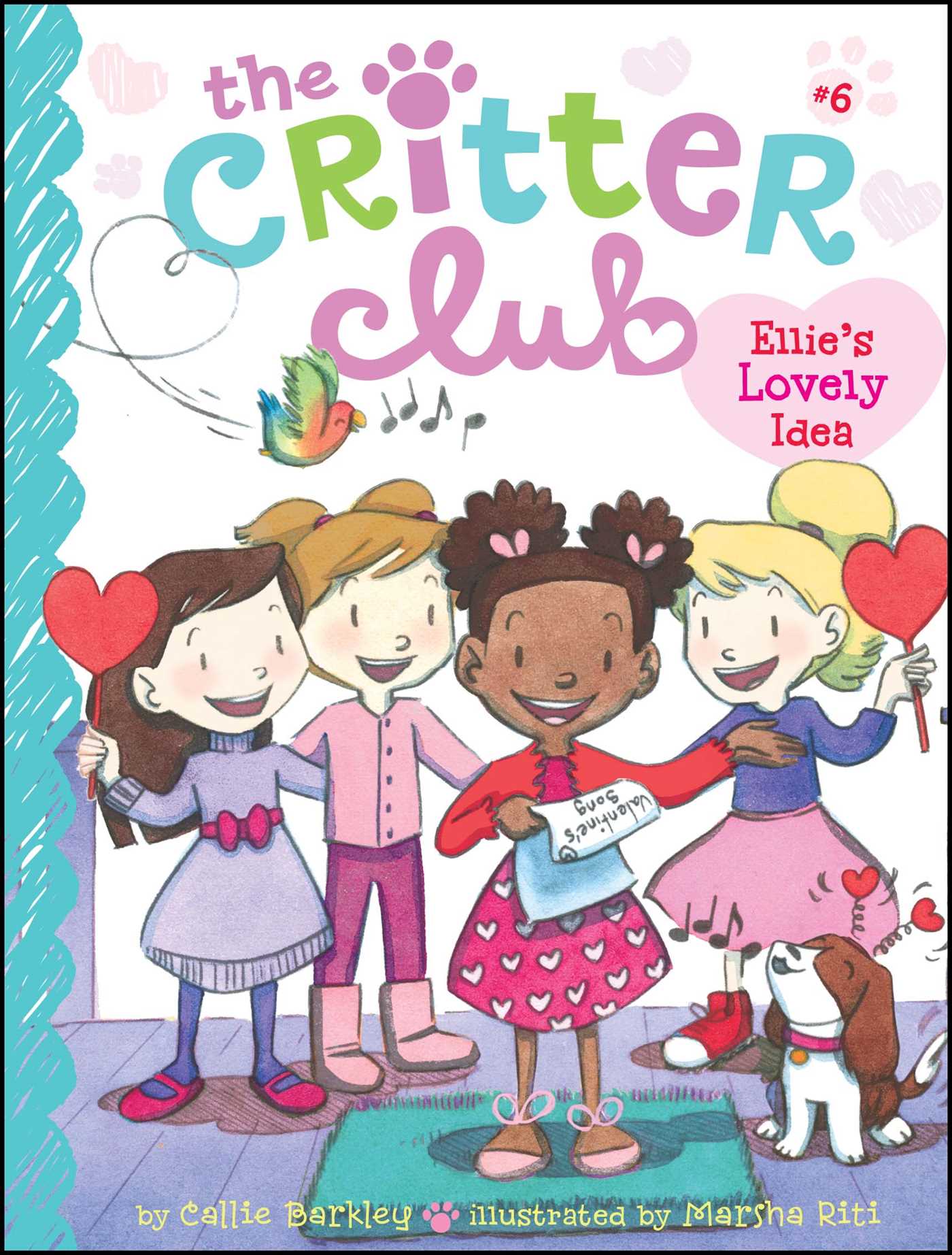 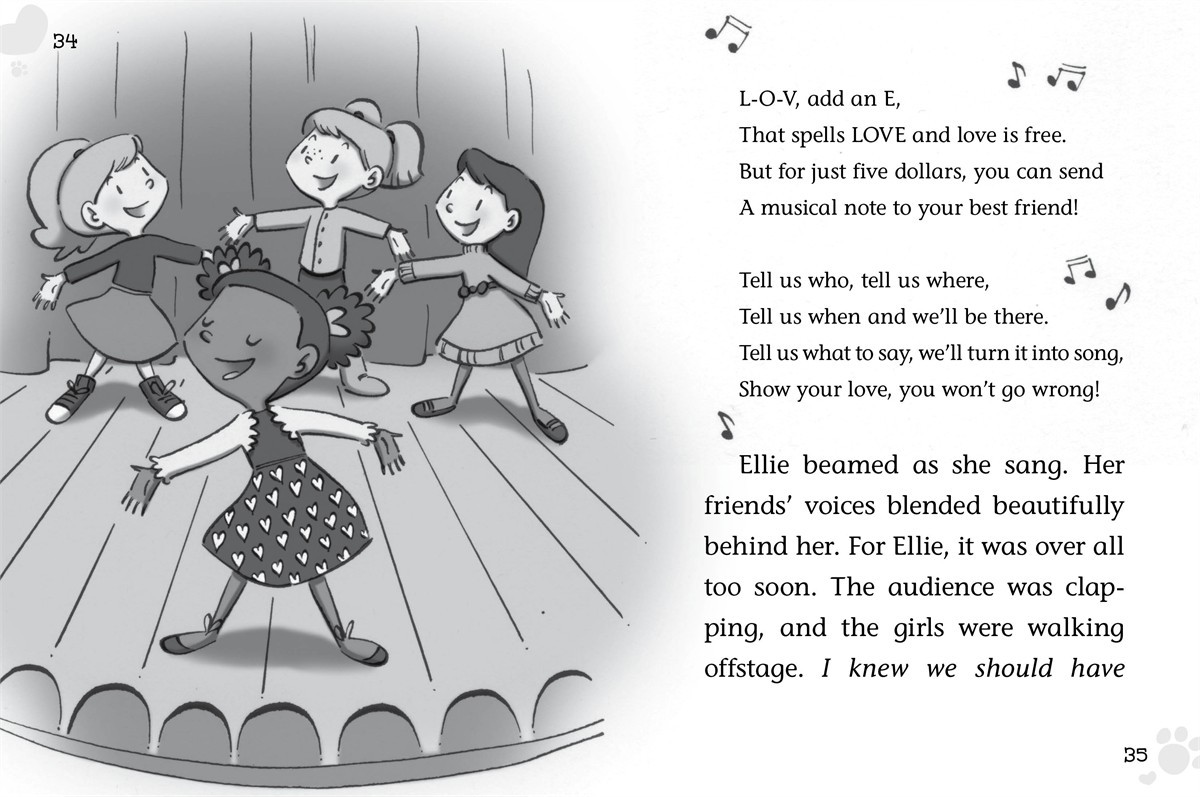 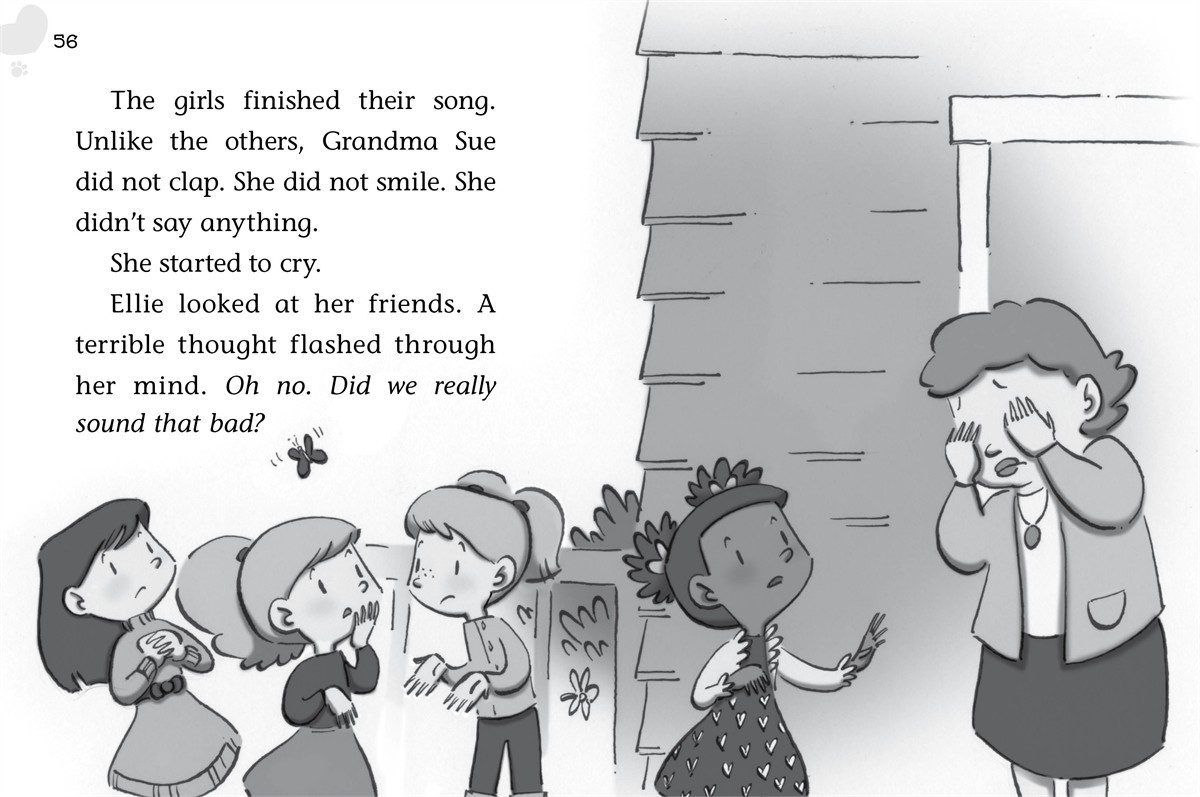 Book #6 of The Critter Club
By Callie Barkley
Illustrated by Marsha Riti
LIST PRICE $17.99
PRICE MAY VARY BY RETAILER

It’s Valentine’s Day, and The Critter Club is singing telegrams for charity—but will Ellie receive some of the love she is giving?

Valentine’s Day is coming up, and to raise money for a charity called Puppy Love, Ellie suggests that she and The Critter Club girls sell singing telegrams. The girls have a lot of fun writing and performing the songs, but all the holiday spirit makes Ellie wish someone would send her a singing telegram! Will Ellie get her wish?

With easy-to-read language and illustrations on almost every page, The Critter Club chapter books are perfect for beginning readers.

Love Is in the Air
Early on a Saturday morning, Ellie and her three best friends, Liz, Marion, and Amy, were making valentines in Amy’s kitchen. The girls had slept over at Amy’s house. They were still in their pajamas!

“Ten down, ten to go!” Ellie said, adding a valentine to her DONE pile. She smiled. Ellie loved seeing her name in red glitter!

Valentine’s Day was next Friday—less than a week away! There would be a party in their second-grade class. The girls were making valentines to give to their classmates.

“Valentine’s Day is so much fun,” said Liz as she finished up her second valentine. Liz was a true artist. She was taking lots of time on each card.

“Me too,” Marion said. “February would be so boring without it.” Marion was using lots of ribbon. Each one of her cards looked like an award. Marion knew all about winning awards. She was really good at piano and ballet and a great horseback rider.

“It has been a quiet month,” said Amy. She was cutting and folding her cards into tiny books. “We haven’t had any animals at the Critter Club for weeks!”

The Critter Club was the animal shelter that the four girls had started in their town of Santa Vista. Their friend Ms. Sullivan had come up with the idea after the girls had found her missing puppy. Ms. Sullivan had even let them take over her empty barn. Now it was the Critter Club! With the help of Amy’s mom, who was a veterinarian, the girls cared for stray, lost, or hurt animals.

“That reminds me!” cried Amy. “We got a photo from the woman who adopted Penny.” Penny was a stray Dalmatian that the girls had been taking care of—until a few weeks ago. Together they had found the perfect home for her.

Amy got the photo from the kitchen.

Ellie sighed. “I sure do miss having her around the Critter Club.” Amy, Liz, and Marion all nodded.

Just then, Amy’s mom, Dr. Purvis, came in from the living room. “I couldn’t help overhearing you girls while I was opening the mail,” she said. “You know, just because there are no animals at the club doesn’t mean you can’t help some other animals.”

Dr. Purvis dropped an open envelope onto the table. Then she winked and walked away.

Ellie reached for the envelope. She pulled out the paper inside. Amy, Liz, and Marion looked over her shoulder.

“Oh! Puppy Love!” said Amy. “This is an organization that my mom’s friend Rebecca started. That’s her.” Amy pointed to the woman in the photo. “She gives money to families who need help paying for their new puppy’s medical care—like all the shots that keep a puppy healthy.”

“It looks like Puppy Love is trying to raise more money,” Marion pointed out.

Ellie looked at the cute puppies in the photo and smiled. How much money do I have at home in my piggy bank? she wondered. Twelve dollars? She would gladly donate it all to Puppy Love to help those families—and puppies—who needed it.

I just wish it could be more, she thought. Much, much more.

Marsha Riti illustrated the picture book The Picky Little Witch by Elizabeth Brokamp and The Critter Club series by Callie Barkley. She lives in Austin, Texas, where she likes to take long walks, stopping frequently to pet neighborhood kitties.

Book #6 of The Critter Club
By Callie Barkley
Illustrated by Marsha Riti
LIST PRICE $17.99
PRICE MAY VARY BY RETAILER