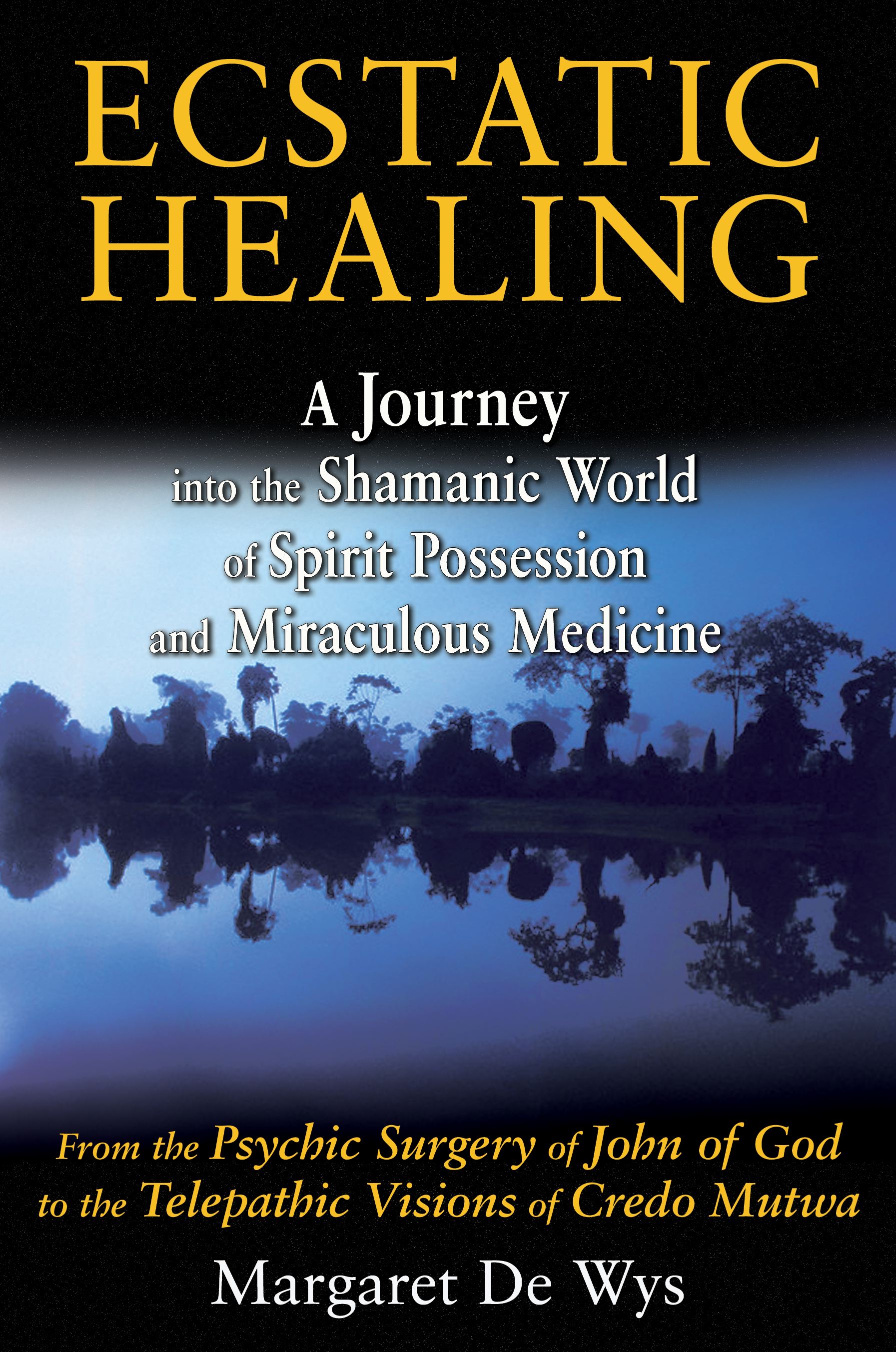 • Explains how each of us is capable of miraculous healing

Margaret De Wys first became aware of ecstatic trance healing when she was a young girl fascinated by the rapture of the Holy Rollers. However, it would be decades before she would be called to explore that early fascination. At a gathering in Upstate New York thirty years later she was spontaneously possessed by a sacred Zulu necklace--a gift from one of the most powerful shamans in Africa, Vusamazulu Credo Mutwa. Frightening yet exhilarating, the experience set her on a search to understand the depths of ecstatic healing.

Margaret journeys to Brazil to work with famous healer John of God (João de Deus), where she witnesses hundreds of miraculous healings through psychic surgery. During her years of spiritual service at John’s Casa, she experiences ecstatic visions, which increase her hunger for more knowledge. She begins to attend possession rituals held by Pai Lazaro, an Umbanda priest, and finds she is a natural medium to the African gods. Called through her dreams to work with Credo Mutwa, she travels to Credo’s Healing Village in Africa, where she discovers her gift as an ecstatic healer and the meaning of true faith. In sharing her journey to reach a profound understanding of ecstatic states and shamanic healing, Margaret De Wys not only gives the reader a direct experience of holiness but also reveals the potential each of us has for miraculous healing.

My friend Susan invited me to a gathering at her house. Her home’s architectural originality, like the majority of the houses in her shady hamlet, was created in the late nineteenth century. I walked into the octagonal back room, a recent addition, about forty feet in diameter. Red, blue, and yellow concentric circles were painted on the floor. The diagram was used for vajra dance, a Tibetan practice performed to harmonize the individual by integrating the body, the voice, and the mind in contemplation. My friends were Tibetan Buddhists and traveled in circles of spiritually like-minded people. There were fifteen other people there, most of whom I knew well. None of us really knew why we were there, or what was going to happen.

It was dusk. Candlelight illuminated the room. Everything twinkled--the glass windows, the polished wood floors, the Tibetan bronze statues placed in a circle around the room. I removed my shoes and walked over to the only person I didn’t know, a tall, middle-aged man who introduced himself as Brad. He was massive, bearlike but not at all fat. His hair was long and unruly, and he wore a kind of Hawaiian shirt and sweater combo over khakis. His smile lit up the room--I was immediately struck by his charisma.

Brad asked us to arrange ourselves in a circle. On one side of the circle was a makeshift altar. He turned to it and began moving rattles, stones, and feathers.

“Please don’t touch any of these private artifacts,” he said. Woo-woo time, I thought. I’m not much of a group participant. I don’t do workshops. Rituals and mystical experimentation en masse always put me in a rebellious mood. I saw in my companions a longing to believe in something transcendent. For my Buddhist friends the universe was populated with bodhisattvas, celestial deities that assisted and inspired them. What grace, what luck for them, I thought. I didn’t believe I’d ever be able to follow any form of religion.

Brad began moving among us singing softly, praying, and laying his hands on some. He’d touch one person gently on the crown of the head, another at the shoulders, or pass his hand down along an arm. “I received a blessing and want to share what I’ve learned,” he said. He began singing primal syllables such as OOOOs and EEEEs and AHHHs. His voice was loud and penetrating, sounding almost like Native American chanting. It created a force in the room. The atmosphere sizzled. From the altar, Brad carefully lifted a white bead necklace.

He approached one of the group members and invited him to touch the necklace, then--still singing--he moved to the next person, and around the circle, one by one. About ten people handled it. I smelled a kind of woodsy fragrance coming from Brad as he sidled over to me with the necklace. I reached out and touched it.

Suddenly, my head jerked. My hands started shaking, then my arms, my torso, my legs. I lurched erratically, as if electrocuted. I tried to break free, but the necklace held me. I felt as if a lightning bolt was inside me and I was fused to it. I couldn’t break away. Grunts and low growls erupted from deep in my gut and turned into howls. I spun around, still locked on to the necklace Brad and I held. I felt I was being consumed by a powerful, mysterious force. I felt no pain. My mind was blank.

What was happening inside me was as uncontrollable as the contractions of childbirth. Some part of me--separate, watching--felt froth gathering at the sides of my mouth and bubbling over onto my chin. I focused on Brad’s eyes, my mouth open in a bloodcurdling scream. His face grew large, intense. “Hold on to the power. Take it in,” he said. Spit, honks, and rapid-fire utterances flew from my mouth. I shook even more violently. I felt my head snap back, seizing, and my body contort into an arc. My body felt as if it was plunging from the top of a roller coaster, up and down again. Brad was holding the necklace; it still had me. Interlocked, we began whirling faster and faster, spinning in ever tightening circles. The room, my friends, forms, and colors were bleeding into streamers.

Suddenly everything stopped. I’d been unplugged. Brad and I were separated. My arms and legs returned to me. I was stunned but once more in possession of my body. The charge in the atmosphere dissipated. The group began to move about.

I was in a state of shock, but I felt very much alive. I looked at my arms and legs almost expecting them to have been charred by fire. What was that energy that ran through me? Why couldn’t I let go? How could such force take me over? I felt embarrassed, as if I’d publicly revealed a strange and intimate history long known between the force and me. It felt almost pornographic, worse than if I’d lifted my dress and peed on the floor while everyone stood watching. Mortified, I wiped the drool from my chin. Clutching the back wall, I slid outside the room.

My God! What had happened? The power scared the daylights out of me. Confused as I was, I couldn’t doubt something happened to me that hadn’t happened to anyone else who had held the beads. There were witnesses. I kept reliving the moment trying to figure out why, why, why. I felt as if something was pulling me into its world. Beneath my fear was a feeling of exhilaration. That force seemed to have picked me. The necklace recognized me. What did it recognize?
Margaret De Wys

Margaret De Wys is a composer and sound installation artist whose works have been performed at venues including the Museum of Modern Art and the Whitney Museum. She has traveled extensively and worked closely with traditional healers throughout the world. Currently working with John of God (João de Deus) in Brazil and at Omega Institute in New York, she also takes groups to the Ecuadorian Amazon to work with the shaman who healed her of breast cancer. The author of Black Smoke, she divides her time between Upstate New York and Southeast Nigeria.

“Margaret De Wys’s Ecstatic Healing is a holy voyage--a remarkable testament of one courageous woman forced by her own sickness to discover the mysterious world of shamanic and spiritual healing. Hers is a journey of surrendering, a journey to faith, and a journey toward accepting herself as a healer. As in her first book, Black Smoke, Margaret writes with utter honesty, which helps us as we join her on her personal journey and question our own life journey as human beings and as healers.”

– Itzhak Beery, shamanic teacher and healer, and publisher of shamanportal.org

“As with Margaret De Wys’s first book, Black Smoke, I was again unable to stop reading her second book, Ecstatic Healing. Not only is Margaret’s story compelling in content, but she also takes her readers on a journey, sharing her hopes, fears, dark valleys, and ecstatic heights. The book made me alternately tremble and celebrate. Margaret allows herself to long for the transcendent, and in her courage and honesty as a writer, she helps the reader open up to their own spiritual longings and thus to the possibility of their fulfillment.”

– Josie RavenWing, author of The Book of Miracles: The Healing Work of Joao de Deus

“..Ecstatic Healing is a tightly-written adventure story that offers plenty of diversion and information for any armchair traveler or spiritual seeker (it kept me turning pages late into the night)...De Wys comes back from all of her travels, both inner and outer, with a profound realization: it’s ecstasy that heals us. She learned that cancer feeds on fear, but it hates joy. Ecstatic Healing is fascinating, and it shares a message we would all do well to take to heart. In a culture permeated by fear and greed, illness and despair, anyone that brings more joy is a true light-bringer. De Wys is one.”

“This book is the story of a woman’s experiences as she journeys to Brazil to work with the famous healer, John of God, then on to Africa, and to eventually return to the U.S. and reveal the potential for each of us to be a miraculous healer.”

“Ecstatic Healing is fascinating, and it shares a message we would all do well to take to heart. In a culture permeated by fear and greed, illness and despair, anyone that brings more joy is a true light-bringer. De Wys is one.”

“De Wys shows us what true faith means and how it relates to miraculous healing and direct experience of the divine.”

“De Wys’s powerfully written, hard-nosed initiate’s tale whisks readers into the deep wild of one of the most mysterious, miraculous, and misunderstood healing methods on our planet--shamanic mediumship. Daring and hilarious, tragic and miraculous, Ecstatic Healing is a must read for those who like to boldly go where few mystics have gone before.”

– Talat Jonathan Phillips, author of The Electric Jesus: The Healing Journey of a Contemporary Gnostic

“For those readers with some experience in shamanic work, or as a psychic or clairvoyant medium, you will find this book contains many insights into the ancient ways of other cultures that we in the West may find strange or otherworldly. It is an interesting and well-written book that I happily recommend…”

“Read this book if you have any doubt as to whether Spirit exists. If you already know, then read it to celebrate what is true!”