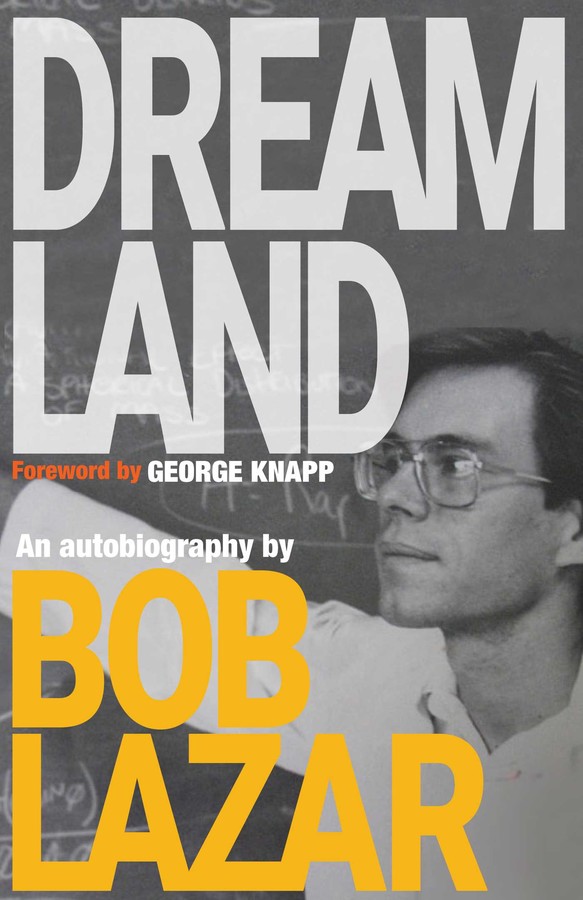 Bob Lazar is the reason Area 51 became infamous in the 1980s and his recent appearance on Joe Rogan's podcast with 7 million listeners is credited with inspiring the Storm Area 51 phenomenon.  In his DREAMLAND autobiography, Lazar reveals every detail of his highly controversial story about being an insider within the world's most legendary military research base.

Bob Lazar was a brilliant young physicist that found himself employed at a top secret facility in the middle of the desert outside Las Vegas. Under the watchful eye of the government elite, he is tasked with understanding an exotic propulsion system being used by an advanced aerospace vehicle he is told came from outer space.

The stressful work and long, odd hours start to wear on Bob and he becomes concerned for his safety. He tells his wife and a couple close friends about what he's doing in the desert, and his employers find out and are furious. When they station goons outside his house, Bob seeks help from wealthy UFOlogist, John Lear, who encourages Bob to take his story to award-winning investigative journalist George Knapp at KLAS-TV, a CBS affiliate.

To prove he's telling the truth, Bob takes a group of people out into the desert to watch a test flight of the "flying saucer." On the way home, they are stopped by the police, who notify the base, and Bob loses his job. In a series of interviews with CBS TV, Bob Lazar then blows the lid off "Area 51," blows the whistle on the effort to conceal this craft from the American people, and blows up his career as a top physicist.

Bob Lazar's reports have been the subject of intense controversy for decades. He has been interviewed numerous times and his story has been corroborated by other individuals he worked with and who were present when these events happened. But until now, Bob Lazar has never told his own story, in every detail in his own words, about those exciting days in the desert outside of Las Vegas and how the world came to learn about the experiments being conducted at Area 51.

We went outside and sitting in front of the open first hangar was the craft we’d recently examined. This time, and it struck me as odd that each of the interior doors connecting the individual bays, was open. In addition to the craft that we’d been allowed to inspect, I could see eight more saucer shapes through the procession of openings. I wondered briefly if we were going to be allowed to see all of them. Each of them looked to be of similar shape, and it wasn’t just because of the distance I was from each of them, but they appeared to be of slightly different size. The one we’d inspected was smaller and sleeker than the others, as if it was the sports car in the line-up. In fact, from that point onward, I always thought of and referred to the craft I was able to enter as the “Sport Model.”

“A low performance test is going to be conducted. We thought the two of you should see this,” Dennis said.

I looked over at him trying to see if he was pleased by his having made arrangements for this, but his face was impassive. I remembered the look of irritation on his face when I’d remarked that the military was still doing things then they way that they had nearly fifty years earlier out at Los Alamos and in Chicago and in other locations trying to create the atomic bomb. All that compartmentalization and secrecy had slowed progress. If they wanted us to be effective, they needed to let us share information. That was how most advances in science and technology—despite the belief in the romantic notion of the lone wolf working in isolation model—were made. Here we were getting some access, greater access to information than before, but still in a far more limited manner than I would have preferred.

I knew it was time to keep my mouth shut and just observe, and that’s what I did. What frustrated me was that with the exception of Dennis, Barry, and I, there were few other S4 personnel around. The omnipresent security guys were there on the periphery, but there was one technician there sitting with a pair of headphones on while seated in front of what must have been a radio, and one other man who stood at a distance from us and kept his back to us the entire time. I stood there with my arms folded, rocking back slightly on my heels, and then the craft did something similar. At first I heard rather than saw any activity coming from the craft. A loud hiss, nothing painful but the kind of buzzing sound that an electric substation might produce, reached my ears. Then the craft lifted off the ground slightly, wobbling, the central axis tilting a few degrees from vertical. As it lifted off, I could see the blue glow of a corona discharge coming from the bottom of the craft.

That led me to believe that the air around the bottom of the craft, where we suspected the emitter was, was being broken down and photons were being emitted. The light was visible, just as lightning in the sky is, due to that incredible high-energy output. As the craft rose, the slight oscillations lessened and the hiss diminished. By the time it was thirty to forty feet in the air, lifting nearly perfectly straight up, the sound was completely gone. In all my years of working with jet engines and pyrotechnics, I was accustomed to hearing loud noises as objects were being propelled upward or forward. The silence was eerily exciting, and I felt a broad grin spreading across my face. I could hear the faint sound of an appreciative expulsion of air coming from Barry as I stood there wide-eyed and mind-boggled.

I could see that the craft had three emitters. Only one was creating the corona display and it was the one that was facing straight down at the ground. As the craft rose in the air, the display expanded. It began as a tight beam and became more diffused with each foot the craft rose. It was like watching someone twisting the lens of a flashlight, increasing the size of the circle of the light from its narrowest to its widest focal range. As that gravitational wave spread out, it helped to stabilize the craft. It hung there, completely still, as if it were suspended there by an invisible steel rod firmly anchored to the ground and some point above it.

With it hanging there above us, we could see more clearly the bottom of the craft and its triad of emitters. They were arranged in a pattern with the one that was functioning at the point of the equilateral triangle. The other two emitters pointed at a right angle to the downward pointing one. Given this orientation, because we were looking up at the larger spherical shape of the craft, I decided to think of the area to the left of the downward pointing emitter as the rear and the area in front of the two other emitters as the front or forward section. That was because the opening of the two forward emitters pointed in that direction, and from what we believed of how the gravitational wave was produced, the energy coming out of the open end of the emitter would allow the craft to move in the same direction as the opening. I knew this was a low performance test, but still I was hoping to see the craft maneuver in the air. It didn’t. I looked over at the technician with the radio. He was far enough away that I couldn’t hear him speaking into a headset, but I could see that he was talking, presumably to whoever was piloting the craft. I thought again of the cramped space inside and the childlike proportions. I also wondered how in the hell a radio wave—an electromagnetic wave—would be able to work in the presence of that gravitational wave. No kind of phase-locked loop should have been able to “survive” in that environment. The electronics guy in me engaged in a brief battle with the physicist in me over which phenomenal phenomenon to focus my attention on.

I didn’t have long to contemplate them. After a few minutes of hovering in place, the craft descended and settled, reversing the process of moving from a stable orientation to a wobbling one before coming to rest.

“That’s it,” Dennis said, always the master of understatement. “Time for you guys to get back to work.”
Bob Lazar