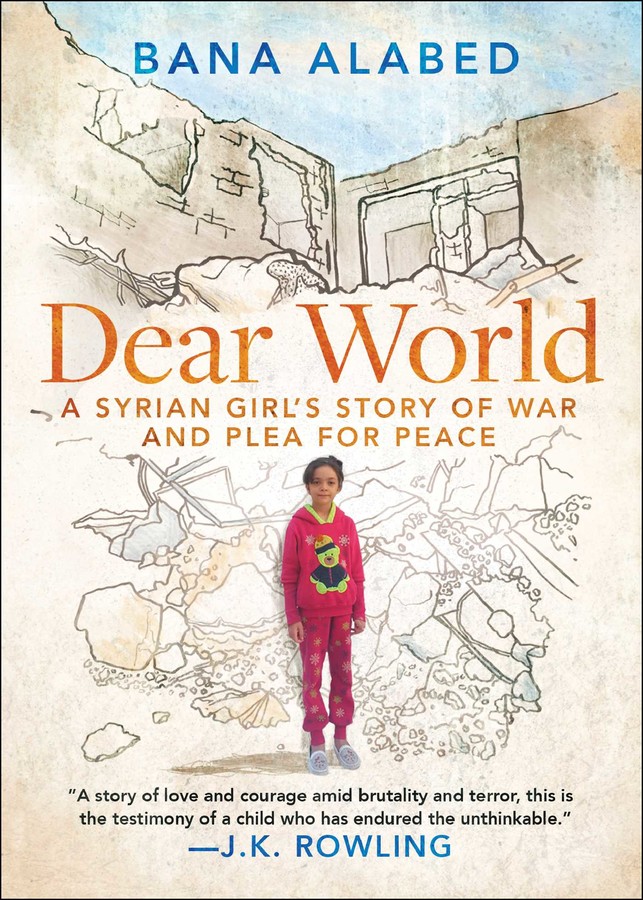 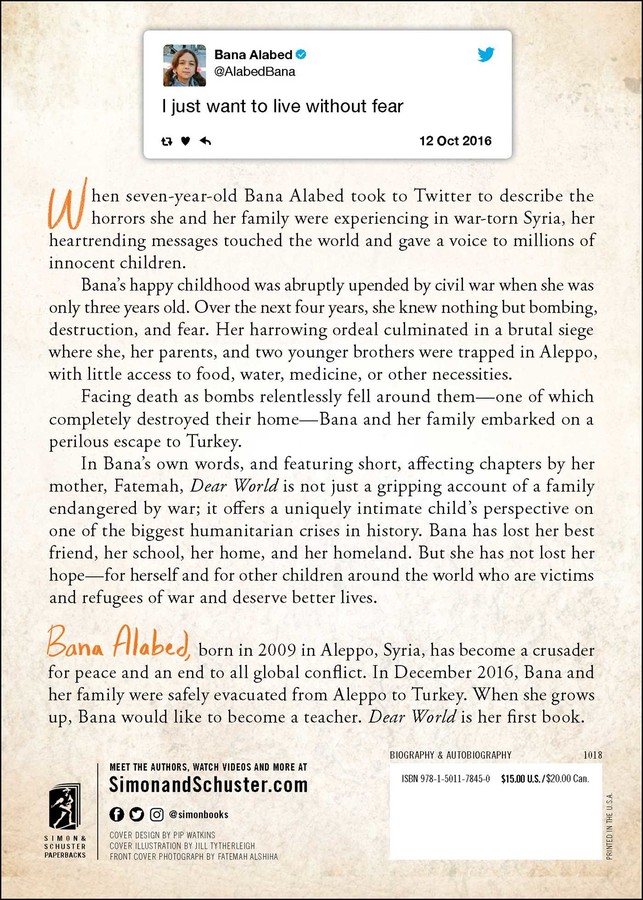 A Syrian Girl's Story of War and Plea for Peace

By Bana Alabed
LIST PRICE $16.00
PRICE MAY VARY BY RETAILER

“A story of love and courage amid brutality and terror, this is the testimony of a child who has endured the unthinkable.” —J.K. Rowling

When seven-year-old Bana Alabed took to Twitter to describe the horrors she and her family were experiencing in war-torn Syria, her heartrending messages touched the world and gave a voice to millions of innocent children.

Bana’s happy childhood was abruptly upended by civil war when she was only three years old. Over the next four years, she knew nothing but bombing, destruction, and fear. Her harrowing ordeal culminated in a brutal siege where she, her parents, and two younger brothers were trapped in Aleppo, with little access to food, water, medicine, or other necessities.

Facing death as bombs relentlessly fell around them—one of which completely destroyed their home—Bana and her family embarked on a perilous escape to Turkey.

In Bana’s own words, and featuring short, affecting chapters by her mother, Fatemah, Dear World is not just a gripping account of a family endangered by war; it offers a uniquely intimate, child’s perspective on one of the biggest humanitarian crises in history. Bana has lost her best friend, her school, her home, and her homeland. But she has not lost her hope—for herself and for other children around the world who are victims and refugees of war and deserve better lives.

Dear World is a powerful reminder of the resilience of the human spirit, the unconquerable courage of a child, and the abiding power of hope. It is a story that will leave you changed.

I had many reasons to be happy when I was little. My baba always took me swimming at Alrabea Pool, which was my favorite thing to do. Going to the swings was my second favorite thing to do. I would also go to the market with my uncles to get Jell-O. (Always red, because that is the best flavor.) My family would go to eat at restaurants, and I would get to talk to many different people. Or we would eat dinner all together many nights at Grandma Alabed’s house, and there were always a lot of people there because I have so many aunts and uncles and four grandparents and two great-grandmothers. I had many books I loved to read, especially my favorite, Snow White. I love all stories about princesses.

And another big reason to be happy: my baby brother. I prayed that Mummy would have a girl, because I wanted a sister very badly. But my brother was tiny and cute, with thick black hair that was soft like a doll’s—so it wasn’t so bad that he was a boy. When Mummy was pregnant, I picked out a name for a sister: Warda, which means “flower,” because another thing I love is flowers. But you can’t call a boy Warda. Instead the name we gave him is Liath (which means “Lion”) Mohamed. We call him Mohamed.

I was only three when Mohamed was born, but I took care of him. I would bring Mummy nappies when she needed to change him, share my toys with him, and say “Shush, shush” when he was crying.

At night I got to hold Mohamed in my lap, and Mum would sit next to us on the sofa in the living room and read to us. Baba would come in and sit in his favorite chair and listen to Mummy read too. When she was done with the story, I would go over and climb into Baba’s lap while Mummy put Mohamed to bed. Mum would tell Baba that he should take me to bed too, but we both liked it better when I fell asleep on his chest. He would tell me stories from when he was little and some that he made up. My favorite was the one about a mummy sheep who leaves her babies at home and tells them not to open the door for anyone unless they know the secret word, and then a wolf comes and tricks the babies into thinking he is their mother. They open the door, and the wolf eats the sheep! I hate that part. But the mummy gets the sheep out of the wolf’s stomach and puts rocks in there instead.

I could feel Baba’s voice through his chest as he told me the stories, and it would make me feel warm inside. The best place to be was in Baba’s lap.

So, not many bad things happened to my family. Mummy would say that we are blessed. I thought my family would always be happy. 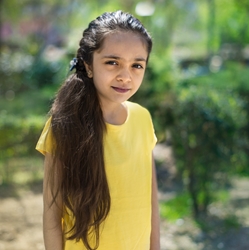 Bana Alabed, born in 2009 in Aleppo, Syria, is known worldwide for her tweets during the siege of the city in 2016 and for her subsequent calls for peace and an end to all global conflict. Her tweets have earned her legions of admirers around the world by giving a remarkable insight into the daily horrors of life in the city, including airstrikes, hunger, and the prospect of her family’s death. In December 2016, Bana and her family were safely evacuated from Aleppo to Turkey. When she grows up, Bana would like to become a teacher, like her mother. Her father is a lawyer, and she has two younger brothers, Noor and Mohamed. She wrote Dear World and My Name Is Bana.

A Syrian Girl's Story of War and Plea for Peace

By Bana Alabed
LIST PRICE $16.00
PRICE MAY VARY BY RETAILER