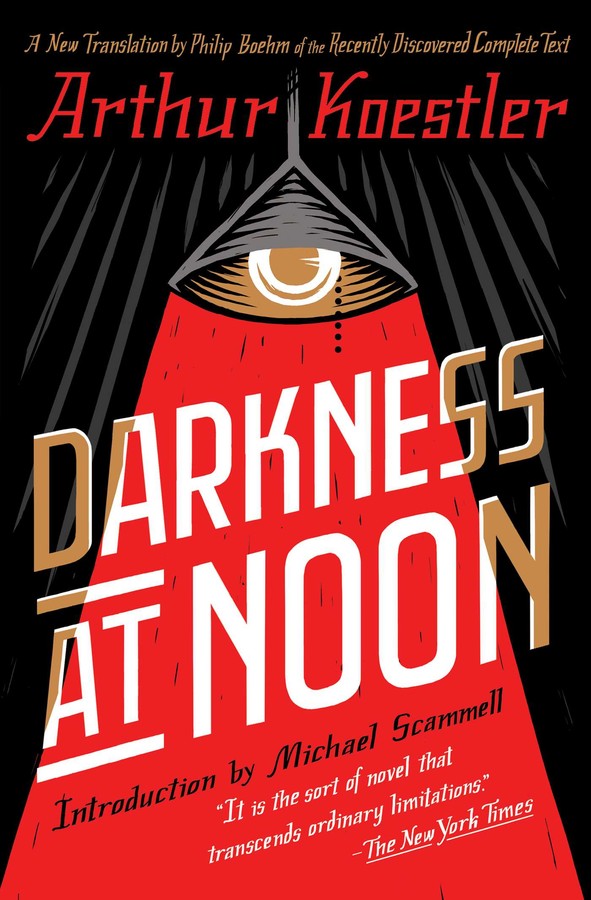 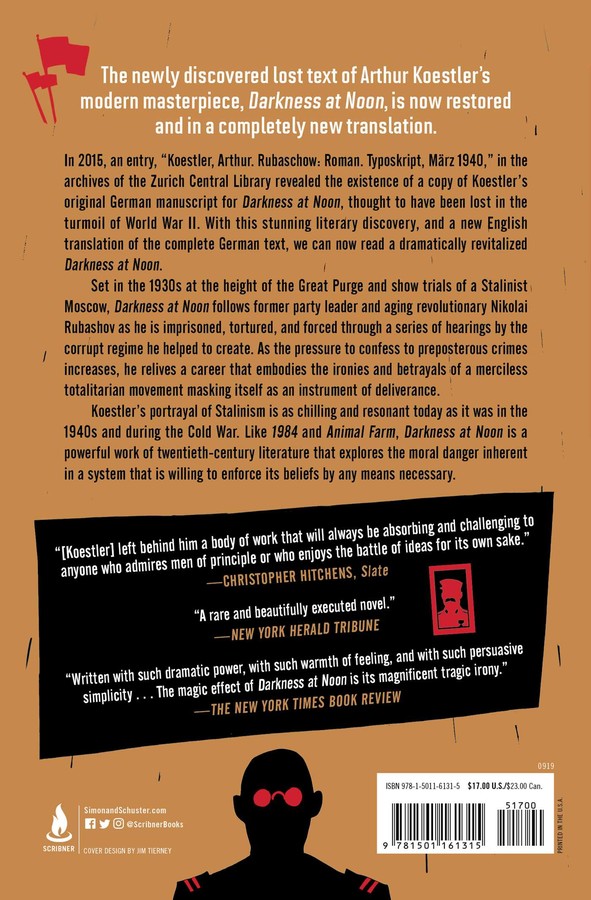 By Arthur Koestler
LIST PRICE $17.00
PRICE MAY VARY BY RETAILER

The newly discovered lost text of Arthur Koestler’s modern masterpiece, Darkness at Noon—the haunting portrait of a revolutionary, imprisoned and tortured under totalitarian rule—is now restored and in a completely new translation.

Editor Michael Scammell and translator Philip Boehm bring us a brilliant novel, a remarkable discovery, and a new translation of an international classic.

In print continually since 1940, Darkness at Noon has been translated into over 30 languages and is both a stirring novel and a classic anti-fascist text. What makes its popularity and tenacity even more remarkable is that all existing versions of Darkness at Noon are based on a hastily made English translation of the original German by a novice translator at the outbreak of World War II.

In 2015, Matthias Weßel stumbled across an entry in the archives of the Zurich Central Library that is a scholar's dream: “Koestler, Arthur. Rubaschow: Roman. Typoskript, März 1940, 326 pages.” What he had found was Arthur Koestler’s original, complete German manuscript for what would become Darkness at Noon, thought to have been irrevocably lost in the turmoil of the war. With this stunning literary discovery, and a new English translation direct from the primary German manuscript, we can now for the first time read Darkness at Noon as Koestler wrote it.

Set in the 1930s at the height of the purge and show trials of a Stalinist Moscow, Darkness at Noon is a haunting portrait of an aging revolutionary, Nicholas Rubashov, who is imprisoned, tortured, and forced through a series of hearings by the Party to which he has dedicated his life. As the pressure to confess preposterous crimes increases, he re-lives a career that embodies the terrible ironies and betrayals of a merciless totalitarian movement masking itself as an instrument of deliverance.

Koestler’s portrayal of Stalin-era totalitarianism and fascism is as chilling and resonant today as it was in the 1940s and during the Cold War. Rubashov’s plight explores the meaning and value of moral choices, the attractions and dangers of idealism, and the corrosiveness of political corruption. Like The Trial, 1984, and Animal Farm, this is a book you should read as a citizen of the world, wherever you are and wherever you come from.

Arthur Koestler (1905-1983) was a Hungarian-British author and journalist who immersed himself in the major ideological and social conflicts of his time. In 1931 Koestler joined the Communist Party of Germany until, disillusioned by Stalinism, he resigned in 1938. In 1940 he published his novel Darkness at Noon, an anti-totalitarian work that gained him international fame. Over the course of his life, Koestler espoused many political causes. His novels, reportage, autobiographical works, and political and cultural writings established him as an important commentator on the dilemmas of the twentieth century.

"It is the sort of novel that transcends ordinary limitations...written with such dramatic power, with such warmth of feeling, and with such persuasive simplicity...The magic effect of Darkness at Noon is its magnificent tragic irony."

"A rare and beautifully executed novel."

"There is nothing stilted about the new Darkness at Noon. It is a seamless, chilling book about the demands ideology makes on truth."

"Its central theme will probably always seem timely, because every political creed must eventually face the question of whether noble ends can justify evil means…a subversive book even today.”

"Koestler’s novel is worth reading (or rereading). It shows how easily a smart person can justify monstrous acts."

"The translation itself shines. It is a smooth, gripping read, and contains passages inserted after Hardy’s translation was made, which now appear in English for the first time...This is a valuable translation of a novel that continues to enthrall."

Arthur Koestler "left behind him a body of work that will always be absorbing and challenging to anyone who admires men of principle or who enjoys the battle of ideas for its own sake."

"A remarkable book, a grimly fascinating interpretation of the logic of the Russian Revolution, indeed of all revolutionary dictatorships, and at the same time a tense and subtly intellectualized drama."

"One of the few books written in this epoch which will survive it."

“Darkness at Noon still lives as a study of fear and victimhood, of state brutality, of unjust imprisonment, of interrogation and forced confession.”

"Koestler demonstrates you needn't sacrifice prose for ideas...This is a book that needs to be read...This is a story that everyone needs to know, one that cuts to the heart of what it means to be a prisoner without rights."

"What makes Darkness at Noon such an enduring artistic work is Koestler’s firsthand knowledge of his source material."

By Arthur Koestler
LIST PRICE $17.00
PRICE MAY VARY BY RETAILER