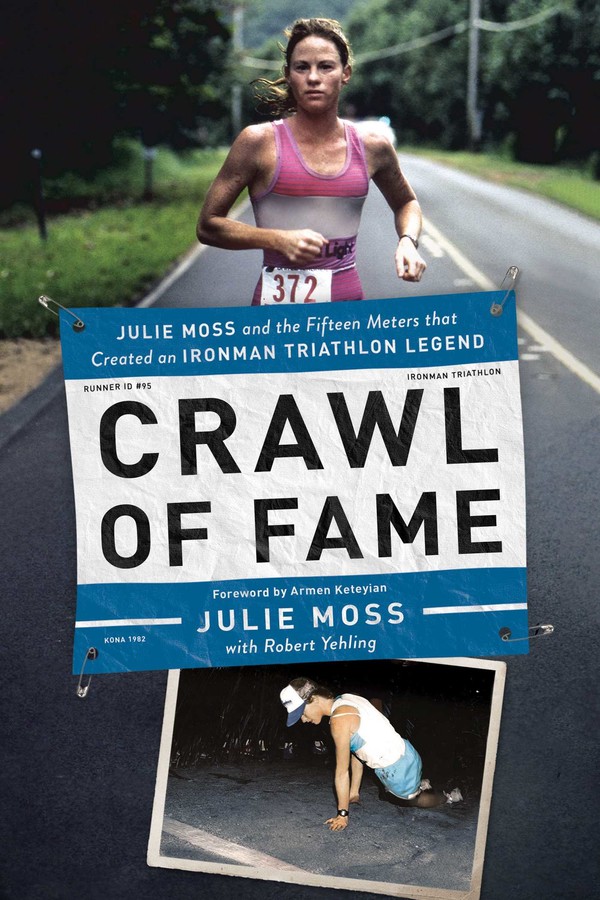 In 1982, Julie Moss ran the Ironman triathlon for her college senior research project. Her idea was quirky, even crazy; only a handful of hardcore, highly trained enthusiasts competed in the little-known, 140.6-mile combination of swimming, cycling, and running. Julie brought no experience or appreciable training beyond running two marathons. She did bring a latent willpower that, the world soon found out, wouldn’t be denied. What happened next changed Ironman forever . . .

After becoming the unlikely leader during the marathon, the final leg of the Ironman, Julie fell and lost all bodily function fifteen meters (50 feet) from the finish. While on hands and knees, she watched her rival pass her. Thirty seconds later, she crawled across the line—stunning the millions who were watching on television. At age twenty-three, Julie became the instant global icon, and the public face of fitness and endurance sports — which exploded in popularity, partly because of her inspiration. That this young co-ed would represent such a new sport was unlikely. That she would inspire millions to change the courses of their lives in the three decades years since was unthinkable. Yet, it happened.

And keeps happening. In April 2017 Julie won her age group in the Ironman North American Championships—racing 25 minutes faster than her 1982 Ironman. How does a 58-year-old woman beat the time of her 23-year-old self? Which begs the question, Could she also beat her 1982 time in the more demanding Kona? That’s the goal, and the world will find out in October 2018.

Crawl of Fame is the long-awaited release of her incredible story. Julie describes how she found her greater purpose while lying across the finish line at Ironman 1982 — and how that greater purpose as a woman, athlete, endurance sports symbol and, now, iconic figure has defined her life and inspired others since.

Several endurance sports athletes have written memoirs, but none have changed a sport so dramatically as Julie Moss. Now, readers will join the inner and outer journey of one of the world’s most impressive athletes, a woman who has already inspired millions — with millions more to come.

Julie Moss is a member of the Ironman Hall of Fame, U.S.A. Triathlon Hall of Fame and a ten-time Ironman competitor. She was the 2012 Triathlon Business International Female Athlete of the Year and was the 2017 Ironman North American Champion in her age group. Julie has served as a commentator for ABC, NBC, CBS, and the Goodwill Games. Julie is a member of the Hoka One One sports team been featured in People, Sports Illustrated, ESPN: The Magazine, The New York Times, and the Los Angeles Times. She lives in San Diego, California.

"For pure drama in the essence of sport, and finding yourself somehow, some way, in the most demanding of circumstances . . . there’s a reason this has stayed with me for all these years.  It is the greatest display of courage I’ve ever seen in a sports event."

"More than any other in history, Julie’s race in 1982 was a display of indomitable strength in the human body and spirit, and changed the face of triathlon and of Ironman forever. Her story captures the profound and positive impact that ironman and one race can have on someone’s entire life, and will undoubtedly inspire and encourage all who read it."

– Chrissie Wellington, Four-time Ironman World Champion and author of To the Finish Line and A Life Without Limits

"The greatest show of courage in the history of Wide World of Sports."

"A courageous account of dealing with disappointment as an athlete and an individual, and a powerful testament to the importance of not giving up on oneself."