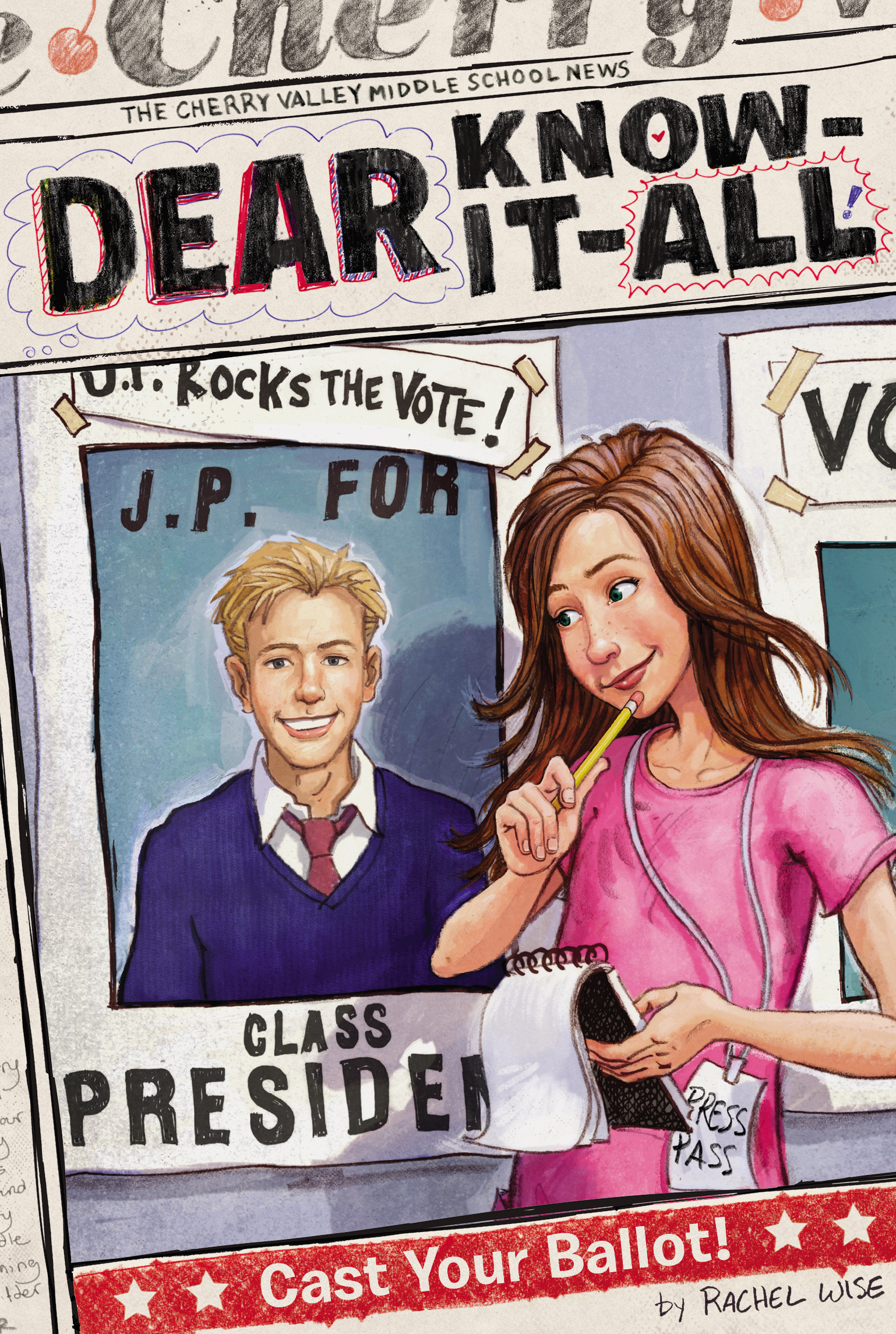 It’s election time at Cherry Valley Middle School, and Sam thinks she’s got the scoop on the candidates! But her investigative journalism reveals some surprises…

But Mr. Trigg reminds Sam to (1) Do her research and (2) Stay objective. And in the process of practicing good journalism, Sam realizes that while John looks and sounds great, he might not actually be the best pick.


It is election season at Cherry Valley Middle School, and I cannot wait to cover it for our school newspaper, the Cherry Valley Voice. Everyone pays attention to the news around election time, so I’m really psyched to be in the middle of it. Plus, it’s good training ground for when I get older and am a star reporter covering the presidential election somewhere (watch for me!). I am obsessed with journalism and have spent years reading posts, blogs, newspapers, and magazines and watching coverage of real elections on TV, and I am ready to get in there and do it myself! I can just see the headline: Polls a Proving Ground for Rising Star Reporter.

Elections have it all: person-on-the-street interviews, polls, background digging, daily highs and lows, analysis—the best stuff journalism has to offer. And what’s great is I’ll get to do it all–and under my own byline, Sam Martone. Oh, along with that of my writing partner and the crush of my life, Michael Lawrence. Michael and I make a good writing team. Luckily, the paper’s faculty supervisor, Mr. Trigg, agrees, so he partners us up for most stories. I have to say, we do make a great pair.

Today Mr. Trigg announced in our newspaper staff meeting that we’d begin election coverage for the next issue. Everyone began whispering with their neighbor (Michael was late, as usual, so I didn’t have a neighbor to whisper with at that exact moment), and Mr. Trigg had to call us all to order again.

“Wonderful enthusiasm here today!” He chuckled. “Nothing like an election to get the journalistic juices flowing! All right, then, let’s talk assignments. Nikil Gupta and Niall Carey, how about a piece on the election process here at Cherry Valley Middle? Let’s focus on: How do people get nominated? How do the campaigns work? Where and how do we vote?”

Mr. Trigg looked at his notes, and just then, Michael entered with a sheepish grin. He nodded at Mr. Trigg apologetically and quickly joined me on the love seat just inside the newsroom door. I always grab this seat early and save him the other half—it’s the best seat for late arrivals, which is what Michael always is. Plus, it is called a love seat, right? Swoon!

“Ah, Mr. Lawrence. So glad you could join us today,” said Mr. Trigg, peering at Michael over his reading glasses. Michael is one of Mr. Trigg’s favorites since he’s an amazing writer and has a photographic memory, so Mr. Trigg lets Michael get away with a lot of other stuff, like lateness. “I’d like you and Ms. Martone to do profiles of the candidates for school president. Front-page stories. Lots of background, person-on-the-street, and primary interviews with the candidates. Okay, you two?”

He looked at us, and we nodded vigorously and smiled. This was a plum assignment. It would be fun to research and write, and we’d get to work together, which wasn’t always a given. I was ecstatic.

“The two candidates are John Scott and . . .” He looked down at his notes. “It’s here somewhere . . . hiding . . . I wouldn’t want to be running against John Scott either! Oh, here it is! Anthony Wright. Okay?”

“Got it,” I said, writing their names down in my trusty notebook even though of course I knew already. I had been reading a lot of posts about who was running, and paying attention for weeks already.

I nodded, happy enough to ignore his nickname for me for the millionth time, as well as the fact that he always teases me for writing things down in my notebook.

Mr. Trigg continued. “Let us all remember, reporters, that we are impartial. As the press, we merely reflect what the public says, and we strive to be the ultimate in fair and accurate reporting, especially when it comes to elections. Now, opinion pieces are a different matter, but I don’t know that we’ll be using them this time around. Feelings do get hurt,” said Mr. Trigg, rolling his eyes heavenward. “In the words of the late, great Winston Churchill, ‘There is no such thing as public opinion. There is only published opinion.’ Too true, dear Winston, too true,” he said, shaking his head sadly.

Everyone giggled, since Mr. Trigg has this unbelievable ability to find the perfect Churchill quotation for anything. Everyone makes bets on how many times Trigger will mention Churchill in a meeting. Some kids even think he makes the quotations up. I always write them down because I like them, so I’m here to say they’re all real because I’ve Googled them! I actually think they’d make a great article one day.

After the meeting Michael and I both had to run to classes, but we made a plan to meet up later and brainstorm.

“Who are you voting for, by the way?” he asked, a twinkle in his eye.

“I am a journalist! I am objective!” I said indignantly. “I won’t know until I have all the facts and can make an informed decision!”

“Innocent until proven guilty, then?” he teased with that adorable smile of his.

“Of course,” I huffed, but I smiled back. How could I not?

At lunch I ate with my best friend, Hailey Jones, and our friends Kristen and Jenna. We are going to the movies this Friday and out for pizza at Slices, and we wanted to talk about which movie to see.

“Action is where it’s at, my friends,” declared Hailey. She wanted us to go see a movie about a spaceship that loses control or something.

“Uh, nothing personal, Hails, but you know that’s not really my bag,” I said.

Hailey rolled her eyes as she took another bite of her usual lunch: white rice with salt and butter (yes, it’s kind of gross, and yes, Hailey’s mother would not be happy if she knew that’s what she ate most days). She said, “You just want to go to one of those old-fashioned Jane Austen novel movies or talky-talky movies you like. I just can’t sit still for that!”

Kristen and Jenna were used to Hailey’s and my battling over details, but everyone knows that underneath it all we’re best friends.

“Well, I have to be true to myself,” I said, all fake righteous.

Everyone laughed, as Hailey had intended, and she smiled a lopsided grin. I didn’t want to propose a vote because I knew Jenna and Kristen wanted to see the same movie about old-fashioned times that I did, and it wouldn’t be fair to gang up on Hailey. We’d just have to let the movie times decide what we saw and never mind accounting for people’s interests.

“Oh, and by the way, there will be way more cute boys at my movie than yours!” said Hailey in one last attempt.

“Hmm. You have a point,” I had to admit. “But any cute boys in particular?” These three girls all know about my huge crush on Michael.

Hailey’s eyes twinkled. “We could invite him!”

“No. It’s a girls’ night,” I said firmly. We’d been planning on this date for weeks. Not that I would really have the nerve to invite him anyway. Or maybe I would. Would that be weird? I realized they were all looking at me. “Anyway, I’m not going to base my activities on Michael Lawrence’s interests!” I declared.

“Humph,” I said. “Let’s change the subject. What do you all know about the candidates for school president?”

“He’s cute, I guess. But I didn’t know we were voting on looks alone,” she said.

“Not that I know anything about the other guy,” she said.

“Who is the other guy?” asked Kristen.

“I’ve got to write profiles on both of them for the next issue of the Voice, so I’ll know a lot more very soon,” I said.

“Need an assistant for the Scott interview?” joked Jenna.

“I already have one!” I declared. And, spotting Michael across the cafeteria, I said, “And he’s right there!”

Here are some of the reasons I love Michael: He is tall and in very good shape from being on the football and baseball teams. He has dark hair with bright blue eyes, which is a great combo, and dimples. He is a good dresser—lots of flannel shirts and khakis—but it’s not just the way he looks. He also has nice manners, and he’s an excellent writer and a talented cook.

Michael and I mostly get along very well, but we sometimes fight, and I hate that. I want him to always like me, and I want for us to always get along, but when things aren’t right, I have to stand up for myself and to him, no matter what. It’s just the way I am. I might compromise on some things, but I won’t change just to make someone like me.

Remembering my responsibilities, I snapped out of my love-struck dream. There was something I needed to grab from the newsroom, and now would be a good time.

“Okay, chicas, I’m off,” I said, gathering up my tray and my messenger bag.

“Yes, but I’ll meet you after school,” I said. I usually help Hailey with her homework if I have free time. She’s dyslexic and she has a school-appointed tutor, but only one or two days a week. I help the rest of the time, since she hates reading and writing and I love it.

I walked a few steps away and looked up and there was Michael, standing with his lunch tray. “Leaving so soon?” he asked.

“Can’t you stay for a minute?” he asked.

“I have to help Hailey with her homework after school,” I said. “Can we talk by phone tonight? Or . . . ?” I was hoping he’d ask me to meet him after school again like he did a few weeks ago.

“Sure. Or maybe we can get together tomorrow,” he said.

Michael did a U-turn away from where he’d been heading (toward my table!) and scanned the crowd for his guy friends.

Parting is such sweet sorrow, as Shakespeare liked to say. Oh well. Business is business, I thought, and I headed back to the newsroom.
Rachel Wise