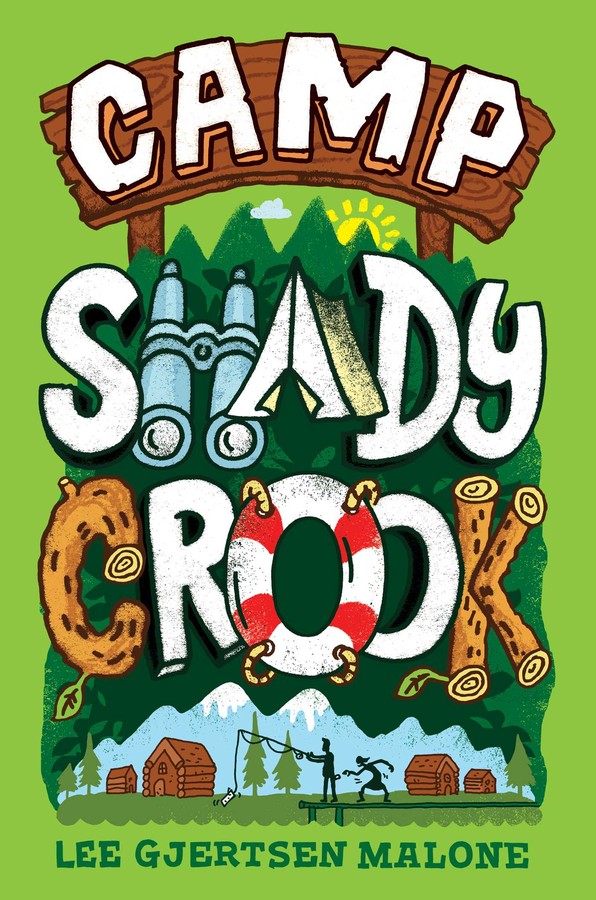 For Archie, the start of summer means another stint at Camp Shady Brook, where there is a lot more to the camp than meets the eye—just like Archie and his now blended family. But thanks to a con Archie developed last year, he’s finally somebody…and he’s not going to lose that status to the new girl, Vivian.

For Vivian, thanks to an incident That Shall Not Be Named or Spoken Of, her summer of exotic travels with Mom and Dad has turned into traveling to a dump of a summer camp in the middle of nowhere.

But thanks to perfect timing, Vivian soon finds herself in a ring of kids trying to out-con each other—and discovers Camp Shady Brook is more like Camp Shady Crook. And when one final, massive con could cost Vivian the first friends she’s had in a while, can she and Archie figure out a way to make things right?

Camp Shady Crook ARCHIE DRAKE
Twelve-year-old Archie Drake stepped off the bus and took a long, deep breath. He smelled fresh-cut grass; cedar shingles; that dank, dark odor of the lake; and at the very edges of it all, a little bit of campfire.

It was good to be back.

He stepped away from the doorway of the bus to let the other kids pass and gave them his most casual smile.

Already he’d sown the seeds for the first week of camp’s Big Game.

It started when his father dropped him off at the strip-mall parking lot, one of the pickup locations for the Camp Shady Brook bus. Camp Shady Brook collected kids every summer from New York City, New Jersey, and Connecticut and drove them deep into New England, where they could spend a week learning archery, water safety, and antiquated campfire songs at a camp nestled into a patch of especially unattractive and straggly woods just outside a completely unremarkable town in Vermont.

A week from now more than half of them would head back on the same bus, with new friends, lifelong memories, and more than a few bug bites (the mosquitoes at Shady Brook were notoriously vicious), but without—if Archie’s cons worked out, and they usually did—most of their pocket money and small valuables.

Not that it would really matter to them, the way Archie figured it. Most of them had no idea how lucky they were.

Archie had arrived at the mall parking lot in his dad’s limo. Well, not actually his dad’s, the limo really belonged to Mr. Carvallo, Dad’s boss at the car service. Dad just drove it around New Jersey, bringing executives to the airport, teenagers to proms, and brides and grooms to weddings.

As he said good-bye, Archie played it cool, like he didn’t want a hug, but that wasn’t a problem for his father. Mr. Drake was not a demonstrative man, and he was already late for work. Archie knew how much his dad hated being late.

Once Archie got on the bus, he waved stiffly out the window at his father, who stood next to the door of the limousine in his dark suit and white shirt, his hair slicked back with gel, dark sunglasses shielding his eyes. “Good-bye, Jameson!” Archie shouted at the closed window, deliberately loud enough so the kids nearby would turn their heads. “Give Mother and Father my love!”

He knew his dad couldn’t hear what he was saying, which was good, since it was complete fiction.

It was also the first step in convincing the kids on the bus he was someone other than he actually was. Because if he was honest with himself—and Archie was as honest with himself as he was with other people, which meant only rarely, and only when there was something in it for him—that was the main draw of camp. The chance to be someone else. Somebody richer. Better. More important. The kind of person who got a ride in a limo because his family could afford it, not because his father drove one as his job.

As different from the kid he was at home as he could possibly be.

Already his dad’s attention was glued to the Bluetooth headset in his ear, telling him he needed to get moving and pick up his next client. Probably some rich guy headed to the airport, at this time of day. With barely a nod, Archie’s dad got back into the limo and drove away.

The boy sitting behind Archie poked his head over the seat and looked out the window to see what Archie was shouting at. “Who was that?” he asked.

“Nobody,” Archie said with a downward glance, like he was embarrassed to be caught waving. “Just my . . . ride.”

A girl across the aisle leaned over and said in a loud and obvious whisper, “Was that guy, like, your chauffeur?”

“What’s a chauffeur?” somebody behind her asked. It sounded like one of the little kids. Camp Shady Brook took in campers from ages eight through thirteen.

“It’s a driver, somebody who drives people around as a job, dummy,” another voice said. “Lots of people have them.”

“Super-rich people,” still another voice chimed in. “Like celebrities and billionaires.”

Archie averted his eyes from the kids who were now staring at him from all the nearby seats. “It’s not important,” he said, adding, with a touch of false humility he’d practiced over and over in the mirror all through the school year, “Really. I’m just another camper, like all of you. My name’s Archibald Drake the Third, but most people just call me Archie.”

A murmur traveled through the crowd.

This wasn’t a surprise to Archie. He knew the effect his name had on people. Most of them would immediately think of the other Archie Drake, the flamboyant chairman of Drake Industries, a regular fixture on TV shows and in newspapers, and one of the richest men in the world. Archie never actually told anyone at camp he was related to that Mr. Drake, and would avoid the question when he was asked directly.

But he also never told people he wasn’t.

Six glorious weeks spread out ahead of him. More than a whole month of sunshine and canoeing, but also, if his plans worked out, six weeks of cons and cold, hard cash. Camp Shady Brook required every camper to bring at least fifty dollars of pocket money to spend at the camp store, a fact Archie had learned to exploit his very first summer there, two years ago.

He’d never understood why cartoons showed characters with a light bulb hanging in space over their head when they got a big idea, but that day, two years ago, he finally got the metaphor. It had been such a simple con, in retrospect. One of those snobby rich kids he’d been afraid to talk to that summer had offered him money in the camp store, because they thought he was related to the other, more important Archie Drake. He’d been stunned, but the kids had taken his shocked response as false modesty and bought him all the candy bars he’d been drooling over with no cash of his own to spend. Instant respect, and instant benefit, all from an easy-to-understand (and explained away, if that came to it) misunderstanding. The perfect con. And it had fallen into his lap.

That moment had changed his summer—changed his life, even, since from then on he knew he was no longer boring/short/bad-at-sports Archie Drake, whatever the kids at home thought. He was someone else. A master of deception.

And now he was back for more. It was almost like coming home—well, if your version of “home” was the worst summer camp in the entire state of Vermont, perhaps New England.

He glanced around the bus. Each week it would take away a load of campers, sunburned, tired, and poorer. Then it would return with a whole new crop of kids, ready to meet Archie. Or Archibald. Or “A-Man” or “Drake” or whatever other nickname he decided to crown himself with, depending on his mood and scheme. All of those new campers, wandering off the bus each week with their duffel bags and eager smiles. Meek sheep, totally unaware of what was in store. At least until the end of the week, when they’d go home and beg their parents not to send them back to boring and beat-up Camp Shady Brook—or as he liked to think of it, Camp Shady Crook—ever again.
Lee Gjertsen Malone

Lee Gjertsen Malone is a Massachusetts transplant via Long Island, Brooklyn, and Ithaca, New York. As a journalist she’s written about everything from wedding planning to the banking crisis to how to build your own homemade camera satellite. Her interests include amateur cheese making, traveling, associating with animals, shushing people in movie theaters, kickboxing, and blinking very rapidly for no reason. She lives in Cambridge, Massachusetts, with her husband, daughter, and a rotating cast of pets.