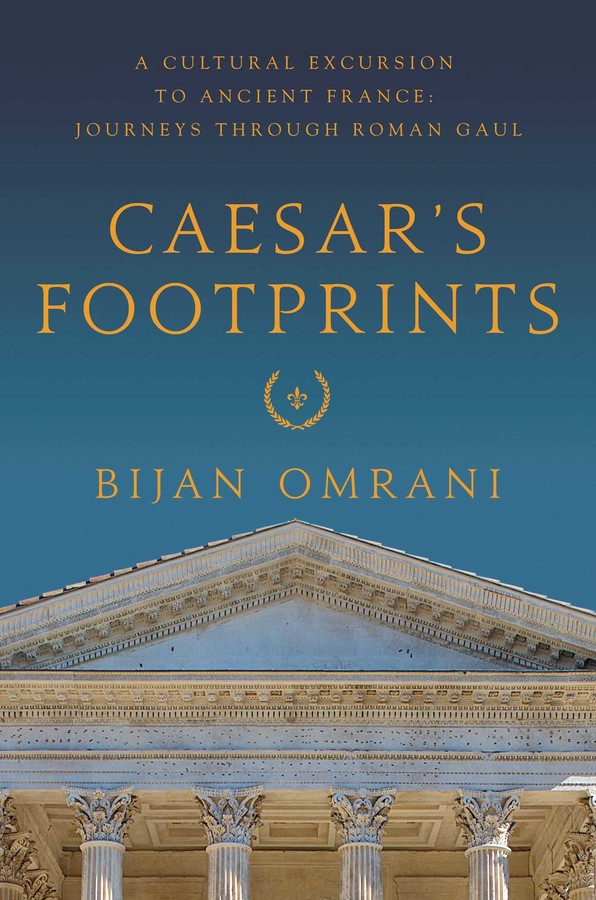 Julius Caesar's conquests in Gaul in the 50s BC were bloody, but the cultural revolution they brought in their wake forever transformed the ancient Celtic culture of that country. After Caesar, the Gauls exchanged their tribal quarrels for Roman values and acquired the paraphernalia of civilized urban life. The Romans also left behind a legacy of language, literature, law, government, religion, architecture, and industry.

Each chapter of Caesar's Footprints is dedicated to a specific journey of exploration through Roman Gaul. From the amphitheatres of Arles and Nîmes to the battlefield of Châlons (where Flavius Aetius defeated Attila the Hun) Bijan Omani—an exciting and authoritative new voice in Roman history—explores archaeological sites, artifacts, and landscapes to reveal how the imprint of Roman culture shaped Celtic France—and thereby helped to create modern Europe.

Bijan Omrani attended Lincoln College, Oxford. His first book, Ticking Tom and the Tornado, was published when he was 10 years old, which he followed with contributions to The Spectator as an undergraduate. His research interests include Euripides, mysticism, Henry Purcell and the history of the Afghan-Pakistan frontier. He is the author and editor of various works on Central Asia including Asia Overland: Tales of Travel on the Trans-Siberian and Silk Road (Odyssey Books & Guides), and also a Fellow of the Royal Asiatic Society and the Royal Geographical Society. He teaches Classics at Westminster School.

"A stimulating history. Omrani displays the facility of a poet, waxing eloquent on the beauty of sites where the Roman influence in Gaul forcefully asserted itself. This book is as much a travelogue as it is a wonderfully simplified lesson on Julius Caesar and his successors. The author effectively shows the full effects of the Roman occupation. His electric excitement is consistently contagious. A book for all lovers of ancient history, with something to learn or love on nearly every page."

"Omrani writes with a free-flowing narrative style. His engaging historical journey includes descriptions of Gaul prior to Roman involvement and continues to trace Roman conquest in the area and its adaptation to Roman influences. An easy read for those interested in exploring broader cultural and historical connections during the Roman transition into the European continent and its continuing impact on the region."

"An educational and enjoyable tour of the ancient Gallo-Roman society that grew out of the ashes of Caesar’s conquest. Omrani provides some sorely needed enrichment for the experience of reading Caesar, contextualizing his narrative in the cultural, historical, and literary landscape of Gaul, yet never losing touch with Caesar’s text itself. Entertaining and edifying."

"A poetic sense for spirit of place. Caesar’s Footprints is a learned and romantic reflection on France’s Roman past, one suffused with affection for its present."

"Bijan Omrani is an exciting and authoritative new voice in Roman history.  Ceasar’s Footprints is an extraordinary tour of the legacy of Roman culture in Gaul. Expertly researched, vividly descriptive, Caesar's Footprints brings history and Roman legacy to life."

"A real delight. Caesar’s Footprints exuberantly marches around France and Britain with the Roman legions, vividly bringing the formation of a shared European identity to life. It pulls no punches on the shocking violence and naked self-interest of Caesar’s northern wars, but is equally candid on the ways he laid the foundations of the medieval and modern West. Striding from Marseille and Arles to Autun and Deal in Kent, the book grippingly blends the unified world the Romans created with the landscapes and cultures two thousand years on. It is a bold vision, elegantly evocative, and an accomplished tribute to year zero of our shared modern European identity."

"Without the conquests of Caesar there would have been no Roman Empire – and, so many of us believe, no continuing Freudian impulse for a European Union today. This terrific account lays bare the horror and cruelty of Caesar's campaigns – as well as the astonishing achievements of the Romans. Bursting with anecdotes and fizzing with unexpected information, Caesar's Footprints compels us to ask – how much does our continent owe to one man and his naked and cynical lust for glory."

"This is a wonderful evocation of how Rome civilised Gaul and through Gaul laid the foundations for European civilisation. Omrani’s golden pen produces prose that is a pleasure to read.  He is a polymath who delights us with his learning – in literature, history and geography – but wears it lightly. His sense of time and place and true civilisation is extraordinary."

– Sir Sherard Cowper-Coles KCMG LVO, author of Ever the Diplomat