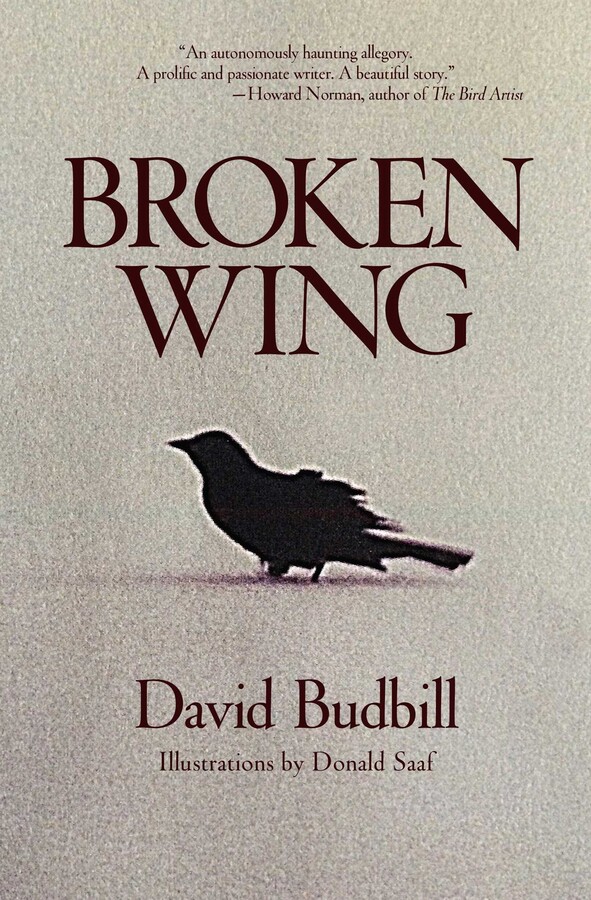 By David Budbill
LIST PRICE $14.99
PRICE MAY VARY BY RETAILER

This posthumous novel from acclaimed author David Budbill tells the story of The Man Who Lives Alone in the Mountains. As winter descends on his idyllic home, the man encounters a bird with a broken wing, sending him into a poetic and profound meditation on solitude, friendship, and the unstoppable march of time.

In the deep woods of Vermont, The Man Who Lives Alone in the Mountains exists in solitude and simplicity. His days are spent caring for his garden and observing the birds and creatures that visit his home. His nights are spent in a contemplative world of music, poetry, letter writing, and, most importantly, bird watching.

As November arrives and The Man prepares for winter, he notices an injured bird, shiny and black, holding his own among bullying blue jays. He is drawn to the bird’s spirit of survival and freedom and names it Broken Wing. Since his only neighbors are a couple of hostile brothers and their bird-hunting cat, Broken Wing becomes a source of inspiration—and a friend.

As fall changes to winter and back to spring, The Man’s dreams of Broken Wing give way to meditations on the peaks and valleys of life, the passage of time, and the poetry of nature.

David Budbill (1940–2016) is the author of eight books of poems, seven plays, two novels, a collection of short stories, two picture books for children, and the libretto for an opera. He also served as an occasional commentator on National Public Radio’s All Things Considered. He is well known for his play Judevine, which is centered on the lives of people who live in a fictional Vermont town—a place of great beauty and sometimes tough living. His honors include an Honorary Doctor of Humane Letters from New England College, a Guggenheim Fellowship in Poetry, and a National Endowment for the Arts Fellowship. David lived a humble, engaged, and passionate life in the green mountains of Vermont with his wife of 50 years, the painter Lois Eby.

“Like a parable from the New Testament, Broken Wing takes everyday events that all of us witness, and makes them a prism through which we can appreciate the richness and mystery of our lives.”

– William Chafe, historian at Duke University and author of "Hillary and Bill: The Politics of the Personal," as well as numerous other books on modern America, civil rights, and feminism

“A man and a bird: the bird with a broken wing, the man himself also in need of healing. Such is the story of Vermont poet David Budbill's beautiful little novella Broken Wing. It is a fable of uncommon tenderness. And it is all the more poignant for having been completed by the author on his deathbed.”

“An autonomously haunting allegory. A prolific and passionate writer. A beautiful story.”

“In Broken Wing, David Budbill celebrates the forces of nature and virtues of solitude. And in a time of clutter and distraction, David reminds us of the beauty in our attentiveness to small tasks and in caring for other fragile lives.”

“You need not be a bird lover or watcher to enjoy this book, but there’s a good chance you will love both birds and life more by its end.”

“The Man Who Live Alone in the Mountains, the well-named protagonist of this little gem of a book, is preparing his gardens and cabin for the winter when he notices a grackle at his feeders, standing its ground against the bullying blue jays. He enjoys the bird’s presence into late fall, thinking it is odd that he is still around, and then realizes that the reason he always sees the bird walking is that he has a broken wing. And as he studies the newly named Broken Wing, he also comes to the conclusion that the bird is not a grackle but a rusty blackbird, a much more elusive species. Thus begins poet David Budbill’s lyric tale of a solitary man and a solitary bird as they make it through a harsh Vermont winter. This lovely, introspective story is an allegory of sorts, examining whether being alone is automatically lonely; the role of music as a balm to the wounded soul; the spare black and white winter and how man and bird cope; and finally how the connection of two lives can be all that matters. Birders will love the inclusion of a species not often seen and will appreciate how the bird’s rarity mirrors the rarity of The Man Who Lives Alone. Highly recommended.”

By David Budbill
LIST PRICE $14.99
PRICE MAY VARY BY RETAILER