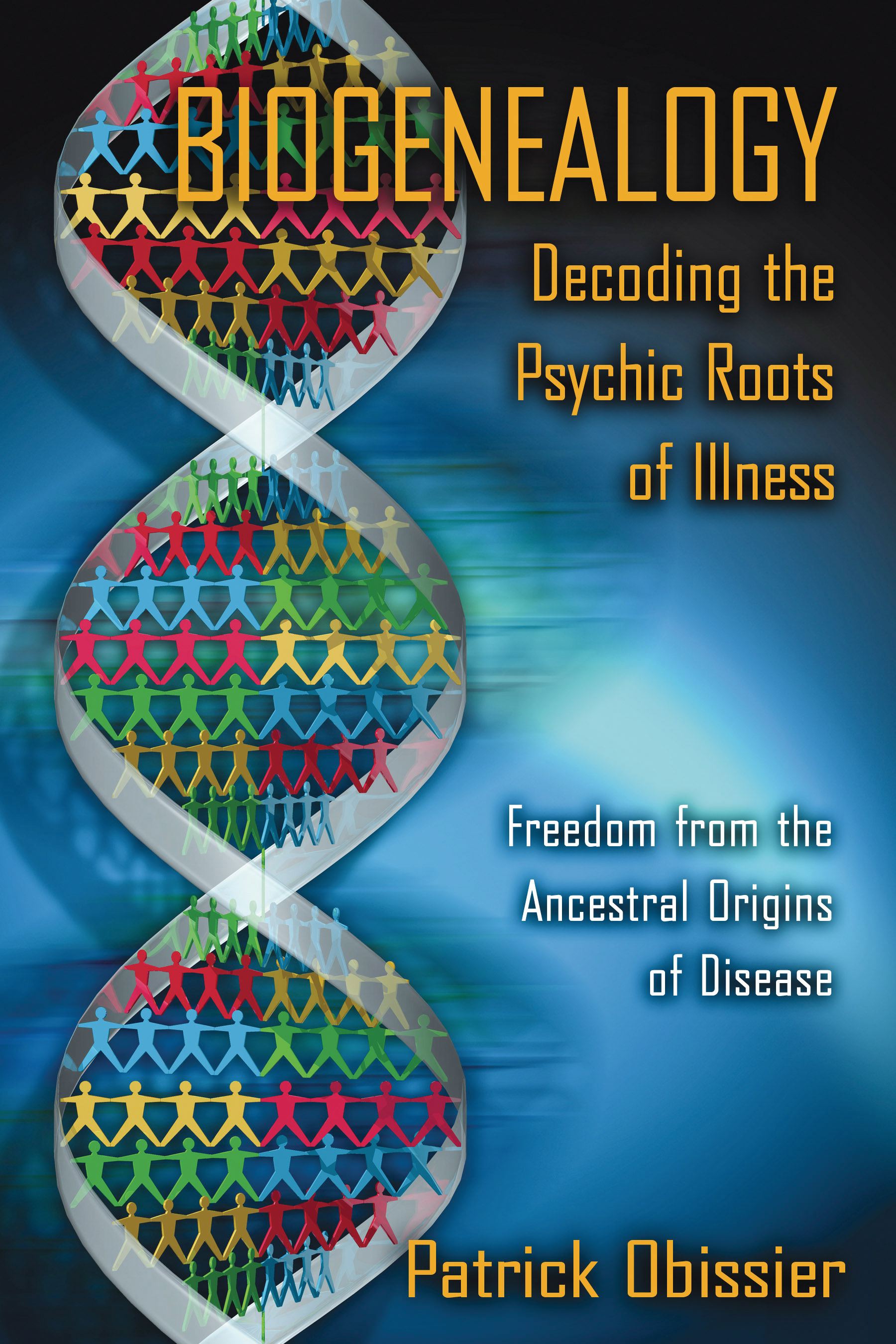 Freedom from the Ancestral Origins of Disease

Biogenealogy: Decoding the Psychic Roots of Illness offers protocols for diagnosis and treatment for conflicts that can span generations. While the idea that emotional stress lies at the origin of every illness is becoming more readily acceptable today, it also is possible to trace the root cause of an illness to our ancestors--their unresolved psychic distress can become part of the cellular memory inherited by their descendants. Until the issue has been settled successfully, it will continue to trigger illnesses in the generations that follow to offset the mind’s inability to resolve the problem. Illness is the body’s way of protecting those who experience severe emotional shock or excessive amounts of stress.

Illness is therefore an ally, rather than the adversary conventional medicine purports it to be. Understanding illness in this way directs us to look for the psychic conflict that underlies it in order to eliminate the disease, rather than merely dealing with its overt physical symptoms. For example, diabetes, which creates excess sugar in the bloodstream, can be triggered by the stress caused by feelings of powerlessness: To compensate for the sense of powerlessness, the body manufactures more sugar to fuel the muscles. To stop this excess sugar production, the psychic distress beneath it must be resolved or it will be passed on to the next generation. When we discover the solutions that create harmony in the body and in our life, the body will no longer have to manufacture illness to restore a sense of balance, and illness will no longer be part of the bequest we leave our descendants.

When life allows us to concretely resolve a conflict, we are not always aware of what was in play (such as a problem from childhood or one even older inherited from the family tree) and the conflict can make an appearance again later. On the other hand, a resolution that is made with full awareness of the programmings involved, with an evolution and a return to reality, is the equivalent of weeding in which the unwanted plants are pulled up by the roots. These plants will not grow back.

As long as a piece of information has not been erased, it can present itself anew. An excess stress may be as old as twelve or even 200 years, it still can come back to life in a moment and is always potentially ready to reappear.

The Importance of the Gaze of the Other

To be cured of a physical manifestation of a conflict, whether it is a stomachache, breast cancer, sterility, a tendency to be disorganized, falling in love with men who are already spoken for, resorting to an abortion, manufacturing eczema, creating sprains or too much “wind” (stomach gas), having car accidents, painful periods, hot flashes, or dislocating a rib, it is necessary to seek out the problem for which this manifestation is the solution.

To do this we require the gaze of the other. If we wish to find for ourselves the information that is frozen in our own dark “Great North,” we will go looking where there is already some light. To do that we will borrow the paths already traced in our brains. The journey does not lead one straight to the goal as it is not the intense emotions one knows of that trigger illnesses or other manifestation, but those which have been forgotten. It is difficult to be one’s own therapist by oneself. As author Jean-Yves Leloup puts it so well, “to go toward oneself one needs the gaze of the other.” A man cannot be aware of the tree concealed behind him except for the intermediary provided by the gaze of the other. The other is a mirror that brings the forest into view (the forest is the ancestors) and hides itself behind the tree that I am and which guides my steps. This other may be a friend, a husband, the milkman, a bartender, in fact any person that lends us their attention. This person perceives some kind of conflict in us, through the sound of our voice, the words we use, our intonation, our gestures, our requests, and so on, and gives it back to us in a form that we can reintegrate. The other is like a transformer that lowers the voltage of the electricity thus enabling it to be received and used.

Illnesses, misfortunes, and suffering prevent the patient from confronting the intolerable emotions that programmed them. The mountain climber will not let go of one handhold until he is sure the next one will hold his weight. A change of beliefs beforehand (the creation of new handholds) is often necessary to finally be able to talk about the sources of profound suffering (letting go of the earlier handhold). The foundational dogmas of the family philosophy (“one should not talk about sex,” for example) can have perverse effects that require unmasking. When the individual is ready, then he or she will progress and pass on to the next stage.

There are conflicts however whose resolution places the subject in a vicious circle that prevents the cure from taking place; this is known as chronicity, the state of being chronic or enduring for a long time: Eczema, for instance, is a phase in the repair of a conflict of separation. But kissing and touching the spouse with eczema may disgust his or her partner and the person suffering from eczema will again find him or herself alone. He or she will then remanufacture a conflict and the illness.

There are also automatic reactions that cause the conflict to persist and aggravate its pathological manifestations: When Mrs. Brown’s husband abandoned her she became more masculine in appearance under the effect of her biological conflict of a feminine affective disorder. She then grew fatter, an aggressive masculine reaction to abandonment. If every time she weighs herself on the scales or looks in the mirror she makes a conflict with her image and her silhouette, then her brain, falling back on a perfectly archaic biological solution to take the place of the unresolved emotional issue, will increase her stock of fat, since fat is a life insurance policy when the winter of life is sensed and old age is a source of fear for the individual. The obesity that is thus acquired will then be damaging to her sense of her power of seduction and the situation will freeze in place. This creates a vicious circle.

It may be in the patient’s interest for his or her illness to continue. Deafness or hardness of hearing protects from noise and what is connected to this noise and makes it possible to not hear the other. Illness can be a means to apply pressure on the people in one’s life, to obtain their presence and compassion along with an additional spoonful of respect, attention, even obedience. (“I took care of my mother for five years; because you are my daughter, I want you to do the same for me.”) It also allows one to abandon one’s earlier goals without having to take responsibility for giving them up. It is the joker of the deck that permits one to discard the hand one is holding and have a good excuse to get out of the game. Illness can also serve as a trigger. It can act as a stimulus to move into action at a time when one has not managed to make that first move to change one’s life.
Patrick Obissier

Patrick Obissier is a therapist who specializes in the biodecoding of illness. Since the 1970s he has been studying numerous holistic therapies to address the role disease plays in humans, society, and the environment and the psycho-cerebro-physical effects that manifest in the human body. He lives in the south of France.

“Biogenealogy: Decoding the Psychic Roots of Illness raises fascinating questions for all physicians and patients to consider--to what extent are psychological, traumatic, and survival experiences of our ancestors passed to us through our DNA and to what extent must we consider transgenerational transmission of disease in our search for healing. Obissier presents compelling examples to support his ideas and raises questions that future research and practice must answer.”

"Certainly, the idea that illness is not necessarily a curse but a challenge to change one’s life is implicitly wholesome. Also sound and constructive is the associated thought that all healing is essentially self-healing--the kind of wisdom that has been an integral part of Yoga and other spiritual traditions for millennia. To see this wisdom spelled out in scientific (neurolinguistic) terms is very helpful, and Obissier’s approach and writing style are positively encouraging."

"Patrick Obissier has written a book with a powerful thesis which it is impossible to dismiss and that is capable of changing profoundly the way we think of and seek to treat illness and disease."

" . . . a subtle metaphor for the principles that underlie the homeopathic understanding of human beings and their illnesses."

Freedom from the Ancestral Origins of Disease