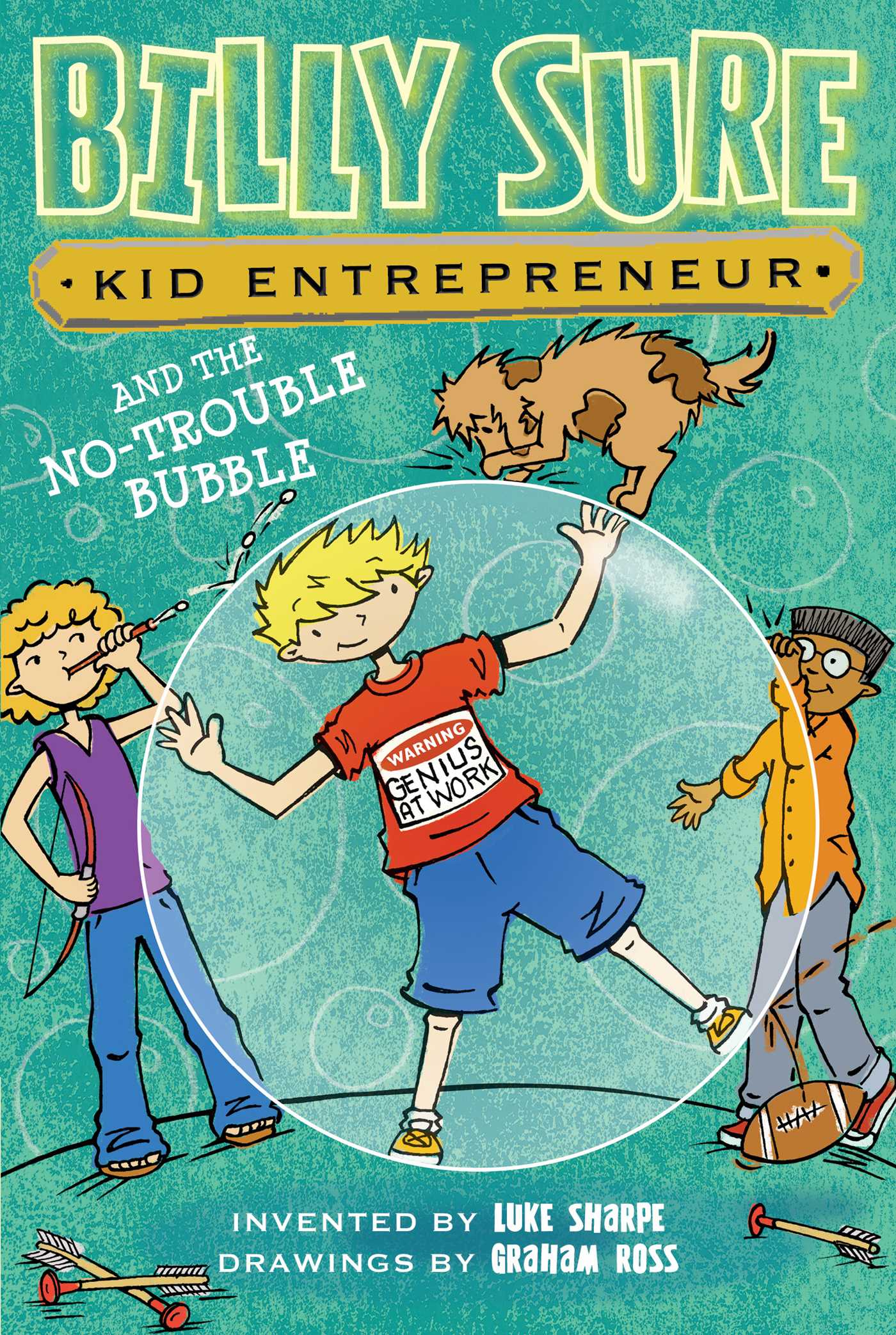 Book #5 of Billy Sure Kid Entrepreneur
By Luke Sharpe
Illustrated by Graham Ross
LIST PRICE $6.99
PRICE MAY VARY BY RETAILER

Billy Sure, twelve-year-old inventor and CEO of Sure Things, Inc., hosts a competition to find the Next Big Thing in the fifth book of a hilarious middle grade series!

Everyone is talking about Billy Sure, the twelve-year-old genius and millionaire inventor whose inventions have become instant hits. From the All Ball that turns into any sports ball to the Gross-to-Good Powder that makes even the most disgusting foods taste great, Sure Things, Inc. can do no wrong! But what’s next for Billy and his business partner Manny?

They’re looking for a new challenge, and hosting a televised special to find Sure Things, Inc.’s Next Big Thing is just the thing! Thousands of kids pile into the studio to present their invention ideas to Billy. Some are wacky, some are wild, and some have the potential to change the world as we know it.

And the winner is…

The Next “Next Big Thing”
MY NAME IS Billy Sure. I’m an inventor. My company, SURE THINGS, INC., has come out with all kinds of stuff, ranging from the ALL BALL—our first product which is a ball that can transform into different kinds of sports balls—to our latest product, GROSS-TO-GOOD POWDER. It makes anything—and I mean anything, even frog legs wrapped in stinky cheese—taste good.

Okay, full disclosure. Credit for a lot of the development for the Gross-to-Good Powder goes to my big sister, Emily. She’s fourteen. When Sure Things, Inc. began, few people could have shown less interest than Emily did, either in me or in my activities, even when those activities included starting a SUCCESSFUL BUSINESS at age twelve.

But something has started to change between Emily and me recently. Oh, don’t get me wrong. It’s not like a “we’ve become best buds, let’s hang out, you’re my favorite person in the world” kind of change. It’s more like an “I no longer wish you lived on another planet” kind of change.

Let me explain. I go to Fillmore Middle School, where I’m in seventh grade. I’m also the president of the Fillmore Inventors Club. I help students with ideas for inventions. It adds one more thing to my ridiculously busy life—school, running a business, homework, spending time with my dad and my dog, Philo—you get the idea. But with this club, I really have helped kids develop their ideas, and even more importantly, have helped to give them a place where they feel they belong.

But I’m getting off topic, which is something I do a lot!

Not long ago, the inventors club had been trying—unsuccessfully—to come up with a way to make spinach taste good. Then Emily showed up unexpectedly at a club meeting with a powder she had created that actually worked. Sprinkle a little of Emily’s powder on your spinach, and spinach is no longer to be feared! But then we had the idea to expand the powder’s powers. Together, Emily, Manny, and I tweaked her invention to make it work so that everything you sprinkle it on tastes good.

Manny’s my business partner in Sure Things, Inc. And I do mean business partner. Manny handles the marketing, packaging, advertising, getting people to invest in our products, and on and on. If it has to do with numbers or selling, Manny is all over it.

He’s also my best friend, which he was long before Sure Things, Inc. came about.

Anyway, since Emily’s help with the now WILDLY SUCCESSFUL Gross-to-Good Powder, she’s shown much more interest in the company, and we’re getting along better than we ever have.

Today, Emily has joined Manny and me in the Sure Things, Inc. office, located in the garage at Manny’s house. She doesn’t come here often. In fact, until she came up with her powder not long ago, she had never actually bothered to step inside. I’m at my workbench, a.k.a. the Mad Scientist Division of Sure Things, Inc., cleaning up a bit following the frenzy—and mess—that always happens when I’m in the throes of inventing. And by “cleaning up,” I mean shoving piles of wires, switches, bulbs, knobs, and a rainbow-colored wig (don’t ask) off my worktable into a nearby drawer. Which leaves only about four layers of stuff on top of the table.

Manny is hunched over his keyboard, as usual, tracking up-to-the-minute sales figures on all of our products.

Emily is sitting next to me. Every time she looks at the mess on my workbench, she shakes her head and turns away.

“What’s the latest on the Gross-to-Good Powder?” Emily asks Manny.

Manny continues to tap away on the keyboard.

“Uh, Manny,” Emily continues, “when someone asks you a question, the polite thing to do is to answer it. At least that’s how it works with NORMAL HUMANS.”

Okay, so maybe Emily doesn’t want to ship me off to Saturn anymore, but I can’t say the same for my best friend. . . .

Manny whirls around in his chair to face us.

“Numbers are great. The Midwest is leading the way with a forty-seven percent rise in sales over the last three weeks,” he reports.

“I would have thought that our house was leading the way, since we put the powder on every single thing Dad cooks!” Emily jokes.

I love my dad. He’s a great artist and gardener, but he is, hands down, the world’s worst cook. Dad wasn’t always the only family chef. My mom travels a lot as a scientist doing research for the government, and about nine months ago she left for her longest trip yet. She wasn’t much better at cooking either, but Mom loved to order in pizza. Dad? Well, Dad likes pizza, but with his own additions. Asparagus, kale, codfish, chia seeds, stinky cheese instead of regular cheese . . . Dad’s cooking is really gross.

Only he doesn’t think so. Fortunately, Emily filled our salt shaker at home with the Gross-to-Good Powder, so now Dad can keep thinking he’s a great cook, we don’t have to hurt his feelings by telling him otherwise, and we can stand to eat his cooking every night.

As for my mom, I miss her a lot, although we e-mail all the time and video chat when possible.

And so, at least for the time being, Emily and I have one of Dad’s bizarre concoctions to look forward to each night at dinnertime. In fact, Dad is so proud of his cooking that his latest painting project is a series of still lifes based on the strange dishes he’s come up with. It’s a little weird. I mean, who would want to buy a painting of JELLIED TUNA?

“That’s fantastic, Manny,” I say after hearing the rundown of our sales figures.

“Absolutely,” replies Manny. Then, without missing a beat, “So, what’s next?”

That’s my partner. As soon as one invention is selling like crazy, Manny is ready to jump into what we’re going to do next.

“I have a file of ideas we’ve rejected,” I say. “Maybe we could rethink one of those.” I grab a cardboard file box out from under my desk and pull off the lid. Okay—maybe I’m not the most organized. The file has rejected inventions in it, but it’s also got doodles of my favorite baseball team, the Hyenas, and the math homework I forgot to hand in last week.

“Let’s see . . . there’s the pen that turns into a jet pack . . .” I begin, reading off the correct paper. “Nah, getting the engine that small could take years.”

“What about another product like the SIBLING SILENCER?” Emily asks. She smiles smugly. Emily loves using Sure Things, Inc.’s second product on me. Last week she silenced me when I was talking about superheroes. Just as I was about to tell her about how I’d love to be invisible, ZING! I couldn’t talk any more. Note to self: Install a “Billy Immunity” option on future models.

“Actually, I didn’t invent that,” I say. “That came out of our Next Big Thing contest where other young inventors submitted their ideas on our website. We picked the one we liked the best and helped the inventor make it a reality.”

“So, why not do that again?” asks Emily.

I turn to Manny, who seems to be half listening and half answering his e-mails, even though he’s the one who started this conversation.

“I don’t think he heard you, Billy,” says Emily. “Working with someone like this every day would drive me—”

“What if we took the contest ONE STEP FURTHER?” Manny says suddenly, turning to look right at us. “What if we turned the Next Big Thing contest into a TV show?”

Emily shoots me a look that I can only interpret as: Okay, maybe working with this guy is not so bad after all.

“Yeah. Well, more like a TV show special, where young inventors present everything from rough ideas to preliminary sketches to first-pass prototypes. Then the judges—I’m thinking the three of us—vote. It won’t be about who has already made the best invention, but who has the best idea. Just like with the Sibling Silencer, the winning inventor would share in the profits, and the TV show would be marketing in itself!”

“That would be way cooler than just sending your idea to a website,” says Emily.

“I’ll get in touch with Chris Fernell,” Manny says. “He should be able to point us in the right direction.”

Chris Fernell is the host of ‘BETTER THAN SLEEPING!’, the TV show where I was interviewed just after the All Ball hit big. He’s somewhat of a friend, or as much of a friend as a TV host can be with a kid, and that’s pretty cool.

“This is fantastic,” I say. “Doing a TV show again, and helping a young inventor, and coming up with Sure Things’ NEXT BIG THING! Wow!”

As usual, Manny has the answer. Reason #988 why I’m glad that he’s my best friend and my business partner.
Luke Sharpe

Book #5 of Billy Sure Kid Entrepreneur
By Luke Sharpe
Illustrated by Graham Ross
LIST PRICE $6.99
PRICE MAY VARY BY RETAILER