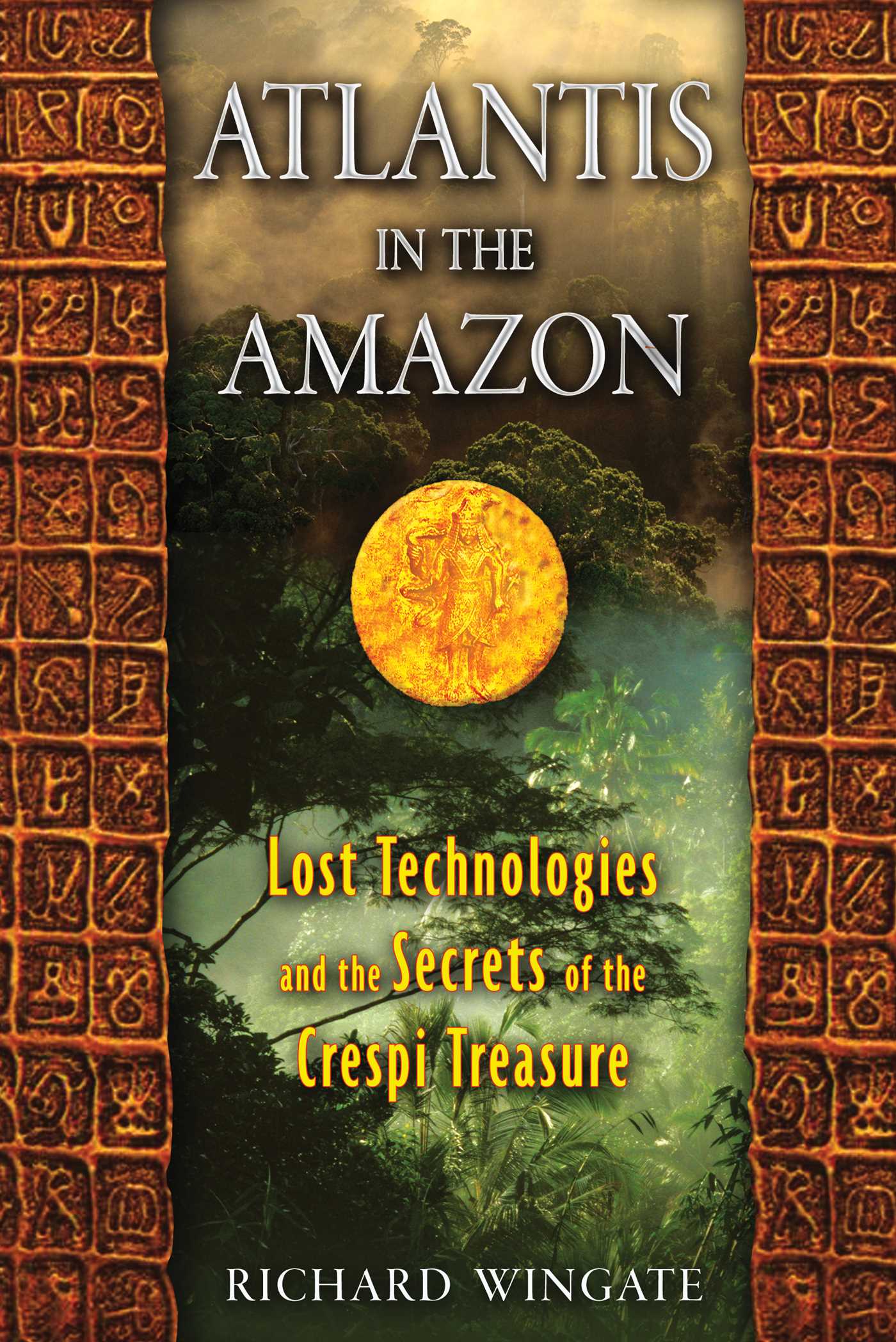 In 1923 an Italian priest, Father Carlo Crespi, came to Ecuador as a missionary. Befriending the indigenous Shuar people, he learned of an ancient treasure they had sworn to protect hidden within a network of underground tunnels. As newly converted Christians, the Shuar wanted to share with their priest these amazing anachronistic artifacts--golden sarcophagi from Egypt, bronze plaques depicting famous scenes from antiquity bearing both Quechua and Phoenician writing, copper wheels and gears as hard as steel, strange machines, and many other inexplicable items. Crespi faithfully maintained the collection until just before his death when the Ecuadorian government purchased it from the church and many of these priceless treasures were lost forever.

Providing detailed descriptions and his own photos of the advanced technologies and beautiful art that comprised the “Crespi Treasure,” Richard Wingate reveals that the ancient civilization responsible for these advanced artifacts was Atlantis. Connecting Crespi’s treasures to Edgar Cayce’s descriptions of advanced technology in the distant past and the Atlantean colonies of Ecuador described by Annie Besant, Wingate explores other evidence of Atlantis in South America and the Bahamas, including geographically out-of-place underwater ruins and buried magnetic ore. Investigating ancient records, such as the Mahabharata, he shows how a prehistoric nuclear war between the Atlanteans and the Aryans ultimately resulted in the sinking of Atlantis, and he uncovers the radioactive archaeological evidence left behind. Explaining how our ancient ancestors regretted their nuclear actions and destroyed or buried their advanced technology, entering into a self-imposed Stone Age, he shows how our civilization is headed down the same path and that only through “green” choices can we avoid the same fate as Atlantis.

“I love that man,” my companion said with a beautiful smile, “the peoples [sic] around here think he is a saint.” We were on our way to a storehouse of marvels I had heard described by Manson Valentine in Miami, just two days before. “That man” was Carlo Crespi--jungle missionary, priest of the Maria Auxiliadora Church, anthropologist, holder of numerous doctorates, explorer, filmmaker, and discoverer of an extraordinary archaeological treasure. My companion was travel agent Cecelia de Eguez, my translator and one of Father Crespi’s many devoted friends. The town we were in was Cuenca, eight thousand feet high in the Andes Mountains of Ecuador.

When we arrived at the church, Father Crespi’s bent, aged figure strode quickly out to meet us with a lot of zip for an eighty-six-year-old man. “Cecelia!” he exclaimed, his eyes widening with pleasure. “When are you going to bring me a little one to baptize?” Cecelia blushed and introduced us with the affection due her family priest. Crespi shook my hand vigorously. “So, you’re the archaeologist, eh?” he asked, a sly smile twinkling his pale-blue eyes. Cecelia translated the wry greeting. “Not an archaeologist, an investigator and photographer, and a person who, knowing of your collection, has great respect for your work.”

“Ah,” the priest said, “enough flattery, let’s take a look.” Without ceremony, he forced a key into an ancient rusty padlock and opened the rickety door to his shed. He touched two bare wires together and a watery yellow light glimmered. Father Crespi was smiling like a man with a remarkable secret.

I was astonished at his huge collection of artifacts. Stacked against one wall were seven-foot-tall golden mummy cases in the quasi-Egyptian style with a fire-blackened finish. There were a few sets of what appeared to be gleaming golden suits of Incan parade armor alongside golden Chaldean-style helmets and golden plaques inscribed with a linear alphabet, later identified as proto-Phoenician by professor Barry Fell. Piled haphazardly on the floor were rich-red copper shields, much pottery, sheets and rolls of silver-colored metal, rolls of golden sheet metal, strange gears and wheels, and peculiar brass pipes with no threading. Scattered among the gold were plaques depicting dinosaurs. “King Midas’s treasure in a rainforest junk pile,” I thought.

The priest pointed to a gray metal ark piled on top of peculiar machines of unknown usage. The ark had golden rings fastened on the sides, obviously to accommodate poles that slipped in for carrying; and it had a hinged door. The decorative animal figures on this ark--an elephant, a llama, and most puzzling, a dinosaur, perhaps a Brontosaurus--were parading upward toward a metal cutout sun disc. Shoved carelessly under piles of other artifacts in a dark corner of the shed were stone and copper mechanical devices with circular stone rollers.

Stone grinding mills, wheeled and geared, but in design unlike anything used by the Spanish, lay partly buried and covered in spider webs. Rolls of intricately repousséd sheet metal, every inch decorated with cartoon figures, were stacked against the walls. The rolls of sheet metal were seven- and eight-feet tall and were made from three-foot-wide pieces artfully riveted together with tiny, delicate rivets to make rolls that were ten to fifteen feet long. There were woven copper rectangles suggesting heat-exchange devices, but decorated with brass air pipes. The priest wouldn’t buy artifacts unless they appealed to his whimsy. However, his whimsy was sharp-eyed and Father Flores-Haro, his devoted pupil, told anthropologist Warren Cook that after an exhausting day, the old priest would spend two or three hours studying books on anthropology and archaeology. His native suppliers cut up rolls of metallic “wallpaper” ripped from the walls of buildings in the rain forest to forge more saleable artifacts--saleable only to the priest, that is--such as the metal statue with modern false teeth, a laughable real-fake, for the sheet metal body of the statue was the real wallpaper “and the teeth were made in a local dental lab.”

Crespi was a shrewd psychologist. Archaeologists just shake their heads when they discover that he knowingly bought fakes, yet his generous and open attitude endeared him to his beloved Indian friends. This attitude kept the artifacts flowing, and much in his collection is obviously real and fantastic. In fact, his attitude and sharp eye brought him one of the finest collections of Ecuadorian pottery and artifacts in the country, as noted by the archaeologists who supervised the looting of his rickety storage sheds. It seems he had a keen eye for beauty.

His jungle diggers once brought him fifty-two bronze plaques of such great beauty and superb workmanship that a scientist at Baltimore’s Walters Art Gallery, whom I visited later in 1978, exclaimed, “That is the most beautiful Nizroch figure I have ever seen.”

Then Carlo Crespi showed me his favorite pieces, letting out a little cry of joy when he smilingly displayed them. There was an unmistakable royal Egyptian woman, a Nizroch, an Assyrian sacred five-legged bull, and one of the plaques bore the image of a Caucasian man writing linear script with a quill pen. Linear script? A quill pen?

The archaeology was tumbled about in two sheds off the courtyard and also stacked in side rooms of the church. Crespi had once had everything stored in an orderly fashion in a museum in his nearby school, but after a fire destroyed his best artifacts, what survived was brought to his church and jammed casually into the shed and a few empty rooms.

The genial priest let me take photographs. “As many as you like,” he said. Most museums guard their treasures from casual photographers, so his open generosity won me over. Lack of space inside forced me to set up my tripod and camera in the outer courtyard. The priest himself brought the artifacts into the sun.
Richard Wingate

Richard Wingate (1933-2011) traveled the world investigating Atlantis and other ancient mysteries as well as giving lectures on his Atlantis theories and his movie, Atlantis in the Bahamas.

“This is a long-overdue book by an authority on the Carlo Crespi collection and what it means to our understanding of the first travelers to the Americas, long before Columbus. Not only is the case made for Atlantis in the Amazon, but Wingate also shows how this collection sounds a clear warning that humanity’s destructive ways are drawing us ever nearer to the same annihilation that wiped out this once thriving and advanced culture. Sadly, Wingate makes the case for the high probability that we are to go the way of Atlantis by continuing to use nuclear energy.”

“The controversial Crespi Collection is presented here by the man who personally examined its artifacts before they were confiscated by Ecuadoran authorities. Richard Wingate’s photographs and descriptions of beautifully made objects representing Assyrian or Babylonian figures document the arrival of Near Eastern culturebearers in South America nearly three thousand years ago.”

“Richard Wingate’s book Atlantis in the Amazon is the definitive book on the mysterious Crespi treasure of Ecuador to which so much has been written.”

“Atlantis in the Amazon is an excellent study of a forgotten, buried past that may have been as fantastically advanced as it was ultimately tragic.”

“Richard Wingate weaves a tale of massive invasion forces, destructive lasers, UFOs made from Ecuadorian balsa wood, and where the evidence of those futuristic creations still exists today.”

“Atlantis in the Amazon is in an excellent study of a forgotten buried past that may have been as fanatically advanced as it was ultimately tragic.”