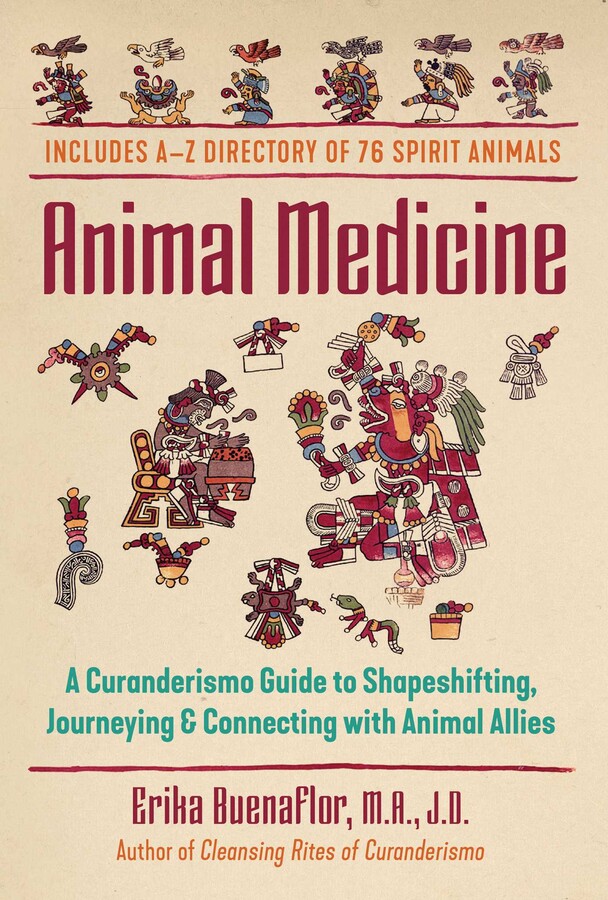 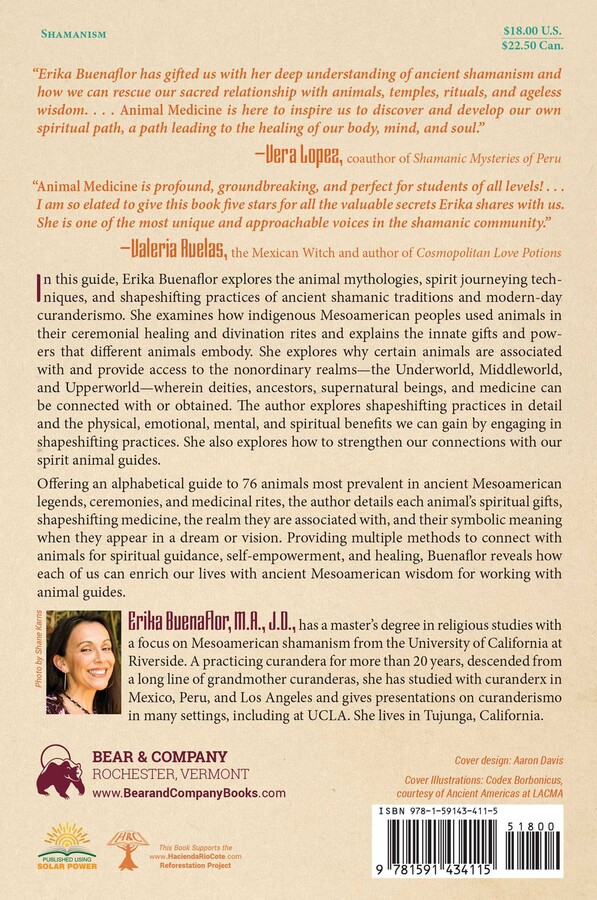 A Curanderismo Guide to Shapeshifting, Journeying, and Connecting with Animal Allies

• Includes an alphabetical guide to 76 animals, explaining each animal’s spiritual gifts, shapeshifting medicine, the realm they are associated with, and their symbolic meaning when they appear in a dream or vision

Offering an alphabetical guide to 76 animals most prevalent in ancient Mesoamericanlegends, ceremonies, and medicinal rites, the author details each animal’s spiritual gifts, shapeshifting medicine, the realm they are associated with, and their symbolic meaning when they appear in a dream or vision. Providing multiple methods to connect with animals for spiritual guidance, self-empowerment, and healing, Buena or reveals how each of us can enrich our lives with ancient Mesoamerican wisdom for working with animal guides.

This book will delve into the symbolic discourse and ceremonial rites the ancient Mesoamerican peoples assigned to particular animals, and explore the two most common ways we can connect with an animal to gain access to their gifts and medicine. One of the most prevalent ways to tap into animal medicine and wisdom is to develop a relationship with them in the physical and spiritual realms (which of course includes dreams) and cultivate a symbolic method of communication with them. Another typical way is through shapeshifting . . .

The K’iché’ associated the coyote with being a cunning nocturnal animal that discovered and dug up hidden or secret things.(70) The coyote’s high predatorial skills also granted it a valued space in the creator echelon: it was one of the first sons of the creator couple, Xmucane and Xpiyacoc, in the Popol Vuh.(71)

The Central Mexican peoples also viewed the coyote as being diabolical, but at the same time grateful and appreciative. Sahagún was told of a story of a warrior who had saved a coyote from a serpent. Two hours after being rescued, the coyote brought the warrior two turkey cocks and pushed them with his muzzle as to say, “take them.”(72) One of their creator deities, Tezcatlipoca, was known to shapeshift into a coyote.(73) Nobles born on Ce Ehécatl were also able to shapeshift into this esteemed predator.(74)

The coyote, like the jaguar and eagle, was a patron of Mexica elite warriors, and was associated with one of the primary military orders. Their military clothing bore the skins of pumas, coyotes, wildcats, jaguars, and eagles, and their head coverings included jaguars and coyotes.(75)

One of the Central Mexican deities, Huehuecoyotl (old coyote) was a coyote deity linked with song, dance, pleasure, deceit, as well as sexuality.(76) The Codex Borbonicus and Codex Tonalmatl Aubin emphasize his musical proclivities, and the Codex Borgia and Codex Vaticanus focus on his dancing. In most examples, huehuecoyotl wears a necklace of pointed shells and a distinctive shell pendant of a pointed oval, costuming usually associated with gods of feasting and dancing.(77)

• Let yourself shake off any unwanted energies and tap into the sacred energies all around you with ecstatic dancing.
• Explore energetic tantric teachings and courses, in general, and also to better understand and work with sensual-sexual energies.
• You are naturally clairvoyant. Develop this gift by learning to hear the energy of what is being said and trust your intuition.
• Go after what you desire with an open mind and heart, it may not be quite what you pictured, but it will be better than what you imagined.

Hummingbirds were associated with the sun, love, war, resurrection, and fertility--due to their role as pollinators of plants.(168) They are small diurnal birds with beautiful iridescent feathers and are the only birds that can fly backwards. They are known for performing aerial acrobatics and quickly darting back and forth, making them look like glints of sunlight.(169) Although they are rather small, they are also known to be territorial and aggressive fighters.(170) When they sleep they enter torpor and can go in this state for prolonged periods, a day or more and sometimes an entire season. Torpor is a deep sleep, wherein their body temperature will drop to the point of becoming hypothermic, heart rate will also drop, breathing will slow down significantly, and they save up to 60% of their available energy. When they are in torpor it looks as if they are dead.

Sahagún and Duran both wrote about the hummingbird’s torpor capabilities, and related associations with death and rebirth. They indicated that in winter they would stick their bills in a tree. When the tree rejuvenated, the hummingbird would grow feathers, awaken, and be reborn.(171) Both the Maya and Central Mexican peoples often depicted hummingbirds in a floral paradise. Sahagún also wrote that the Central Mexican peoples believed that four years after death, brave warriors would become hummingbirds, birds, or butterflies, and spend the rest of eternity drinking nectar from flowers from an Upperworld paradisal flower realm and from flowers on earth.(172)

The Mexica’s tutelary war deity Huitzilopochtli was commonly depicted with a blue-green hummingbird headdress, likely due to their association with the death and resurrection of brave warriors as hummingbirds. (173) In the Codex Borgia, hummingbirds were illustrated in scenes associated with the rainy season, and an abundance of maize and flowers.(174)

In Classic Maya art, the sun, who was courting the moon, often did so as a hummingbird, and possibly a mosquito. Mosquitos were likely regarded as the counterpart of hummingbirds.(175) In modern narratives, the sun suitor takes the shape of a hummingbird. On the Postclassic Dresden Codex, 7b, the hummingbird is identified as the chich “prophecy” of several gods, indicating its role as a messenger of the gods.(177)

• You have mighty divine forces helping you. Have faith and keep it light.

• Do not forget the importance and power of joyfulness and playfulness. Give yourself opportunities to practice these invaluable skills.

• Be relentless in pursuing your goals, and go beyond believing you can do something, know that you can.

• Remember to give yourself time to conserve your energy and rest; be strategic and intentional about this. When you are resting, no answering business-related calls, emails, or texts, simply rest.
Erika Buenaflor

Erika Buenaflor, M.A., J.D., has a master’s degree in religious studies with a focus on Mesoamerican shamanism from the University of California at Riverside. A practicing curandera for over 20 years, descended from a long line of grandmother curanderas, she has studied with curanderas/os in Mexico, Peru, and Los Angeles and gives presentations on curanderismo in many settings, including at UCLA. She lives in Tujunga, California.

“The animal kingdom, in its love and compassion to humans, is always willing to gift us with what we need the most when our souls are in need of teachings, guidance, and medicine. We, however, have lost so much of our connections to the ancient wisdom and the shamanic practices, making it quite difficult to translate the meaning of what is being transmitted. In Animal Medicine, the great curandera Erika Buenaflor has gifted us with her deep understanding of ancient shamanism and how we can rescue our sacred relationship with animals, temples, rituals, and ageless wisdom. This book is filled with teachings and practices from a rich culture, kept sacred by the curanderx of Mesoamerica. Animal Medicine is here to inspire us to discover and develop our own spiritual path, a path leading to the healing of our body, mind, and soul. Muchas gracias, Erika Buenaflor, for your curandera’s gifts to us all.”

“As a bruja, I want to thank Erika Buenaflor from the bottom of my heart for all the research, love, and dedication she put into this book. Animal Medicine is profound, groundbreaking, and perfect for students of all levels! I am fortunate to have experienced Erika’s magic in person. She is a loving and strong spirit, a conduit from times past, and her work is here to heal our future generations. I am so elated to give this book five stars for all the valuable secrets Erika shares with us. She is one of the most unique and approachable voices in the shamanic community.”

“Filled with information and experiential exercises to give you a first- person perspective, this book is a delightful deep dive into Mesoamerican shamanic wisdom! Buenaflor’s work is not only valuable for exploring animal spirits from the curanderx perspective but will also augment the relationships with spirits you have already encountered on your shamanic path.”

– Evelyn C. Rysdyk, author of Spirit Walking, The Norse Shaman, and The Nepalese Shamanic Path (with B

“Erika Buenaflor has added significantly to our understanding of curanderismo with her three previous books dealing with cleansing rituals, soul retrieval, and sacred energy. Her new book, Animal Medicine, adds to an ever-expanding examination of curanderismo and shamanism, which cannot be complete without understanding the role that animal spirits play in the esoteric and mystical world of human experience.”

“With Animal Medicine, Erika Buenaflor lays an offering at our feet of how to commune with nature and access our animal guides. This comprehensive text is a must-read for anyone looking to connect with ancient Mesoamerican traditions that help us understand our physical world, dreams, animal meanings, myth, and symbolic discourse.”

“Erika Buenaflor has both researched and had in-depth experience to gather an incredible wealth of wisdom teachings on animal medicine to assist journeyers in their deep connection with animal spirits and allies. If you have a desire to understand how to work with animal medicine, this is definitely the book for you! The imagery is provocative and stirring to the psyche, opening the consciousness to the inner journey.”

“Animal Medicine is a very heartfelt and authentically researched addition to the kingdoms of animal spirit literature and wisdom. Long live Itzamna!”

A Curanderismo Guide to Shapeshifting, Journeying, and Connecting with Animal Allies