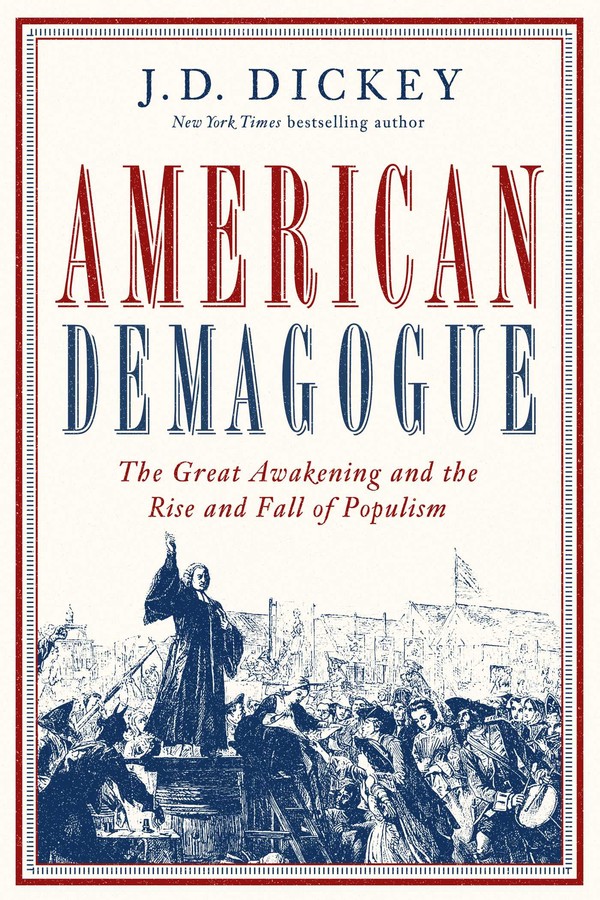 The Great Awakening and the Rise and Fall of Populism

A New York Times bestselling historian examines how demagoguery and the populism it inspires—for good and ill—is embedded in the very soul of our nation.

In November 1739, the American colonies felt an earthquake. It arrived not in the form of a natural disaster, but with a twenty-five-year-old preacher, George Whitefield. He had come to the New World to tell his listeners to repent their sins and be reborn in Christ, to reject the dead teachings of their unredeemed ministers, and to support his many holy endeavors.

It worked: his stunning oratory and colorful theatrics gave him an almost ungodly sense of power over his audience. Overwhelmed with passion, his listeners experienced uplift and ecstasy in their quest for salvation. They also felt a great deal of fear, as his message divided congregations and split Americans into warring sides over God. Eventually, this spiritual uprising would acquire a new name—the Great Awakening—and it would alter the very fabric of American life in ways no one could have ever expected.

Whitefield's methods inspired allies and imitators who drove the movement to greater heights—men like Gilbert Tennent, who issued threats against his enemies and imagined hell for those who disagreed with him, and Jonathan Edwards, a thoughtful theologian who nonetheless preached one of the most frightening sermons in history. Ben Franklin, too, played a key role in promoting and profiting by the Awakening, even as he was repelled by certain aspects of it. At the same time, radical new preachers rose up to inspire women and enslaved black Americans to offer their own testimony to God in ways that proved to be threatening to the colonial hierarchy.

The Great Awakening peaked and then collapsed, but it had a profound impact in reshaping the American mind. The voices of dissent left the churches and went into the streets, and aimed their rancor at a new target: the ruling power of Great Britain. And so what began as a revolution fought over words and gospel mutated into one fought with riots and violence, until it eventually exploded in to war.

This book tells the story of that transformation, and the way a firebrand English preacher incited Americans to rebel against more than a century of tradition, and set a precedent for the kind of galvanizing agitator who is still with us today—the American Demagogue. Though almost three centuries have passed, the themes remain the same—anger, grievance, dissension, self-promotion, and social turmoil—as the tide of populism continues to rise and fall.

J.D. Dickey is the New York Times bestselling author of Empire of Mud, a history of the troubled rise of Washington, D.C., in the nineteenth century and Rising in Flames: Sherman’s March and the Fight for a New Nation, also published by Pegasus Books. He lives in the Pacific Northwest.

"Dickey’s book contemplates the curious tendency of populism to veer off in radical directions that its originators (including Whitefield) do not intend. A sprightly, engaging narrative.  For [Revolutionary] soldiers, what Whitefield preached was what they fought for: the spirit of Christ and of liberty."

“Dickey tells us in graceful prose how 18th century American evangelists held their audiences spellbound—the same techniques employed by one demagogue after another. Masterful. The Great Awakening was a popular and inclusive uprising spearheaded by Whitefield and his apparent demagoguery but by no means confined by them. And that uprising presumably made Americans of us all.”

"A thoughtful take on an intriguing period of American history."

"Politics intersected with this religious, populist fervor and the seeds of the American Revolution were sown and began quickly to grow, affecting decades far beyond the Revolution itself. Journalist and U.S. historian Dickey (Rising in Flames, 2018) enhances his account with illustrations from contemporary sources, which give readers compelling images of this era’s vivid personalities."

"Ineresting. Dickey looks at the march mainly through the eyes of soldiers and other participants."

"Superlative and impeccably researched. Dickey tells the story of Sherman’s march unforgettably, with power on every page."

"A page-turning and highly original account. No one interested in Sherman’s March should be deprived of his lively narrative. Absolutely spellbinding."

– The Wall Street Journal (Praise for RISING IN FLAMES)

The Great Awakening and the Rise and Fall of Populism