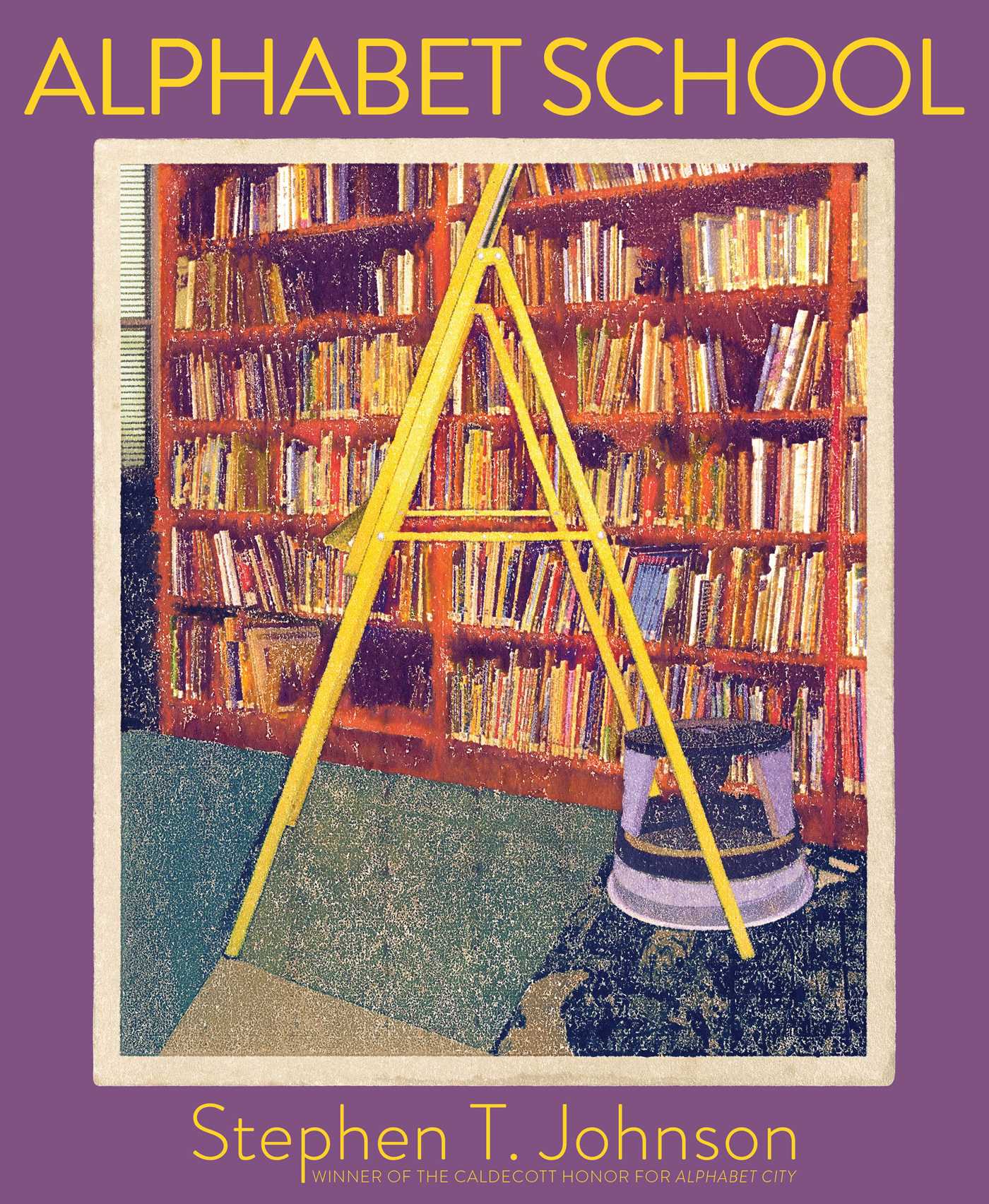 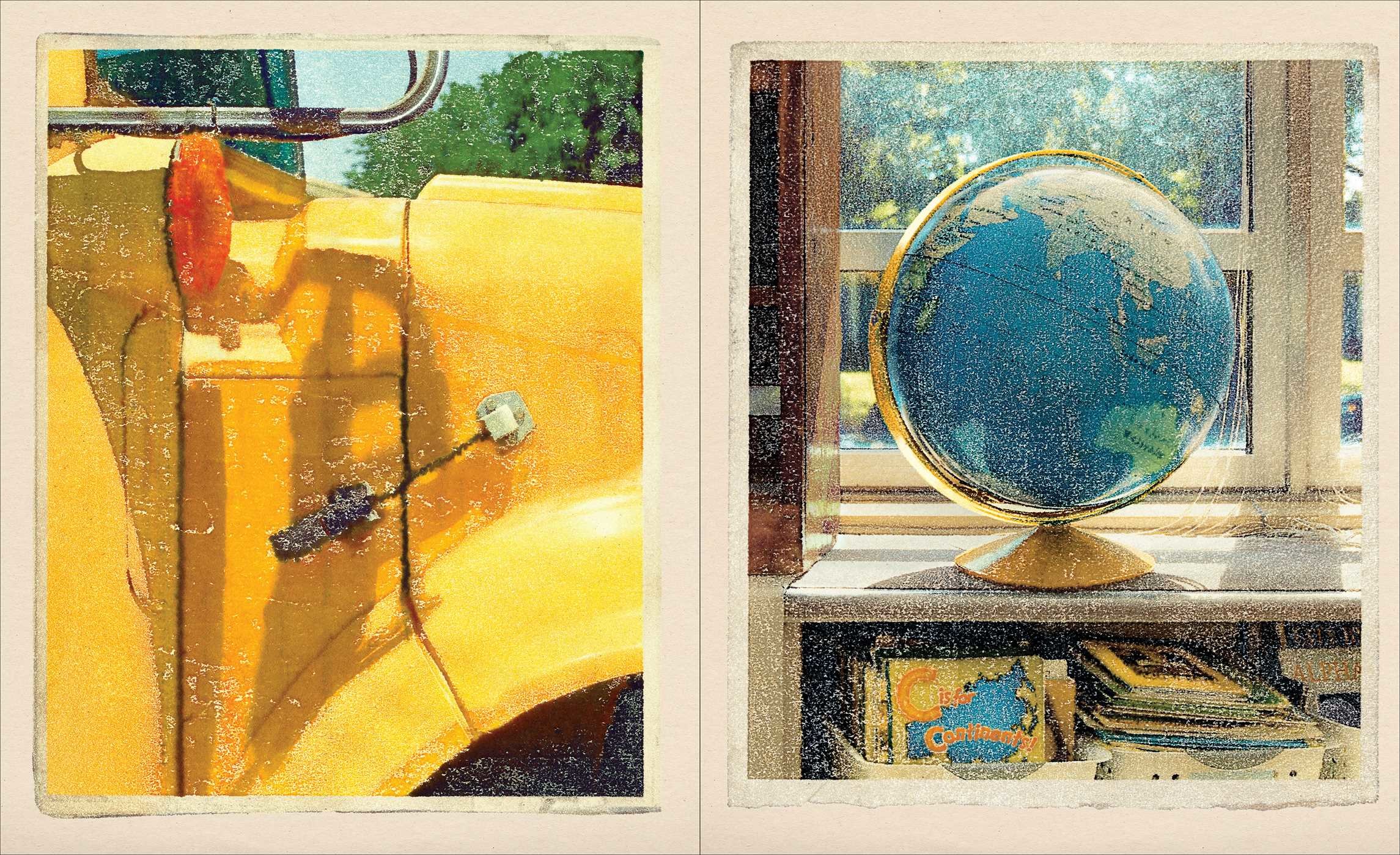 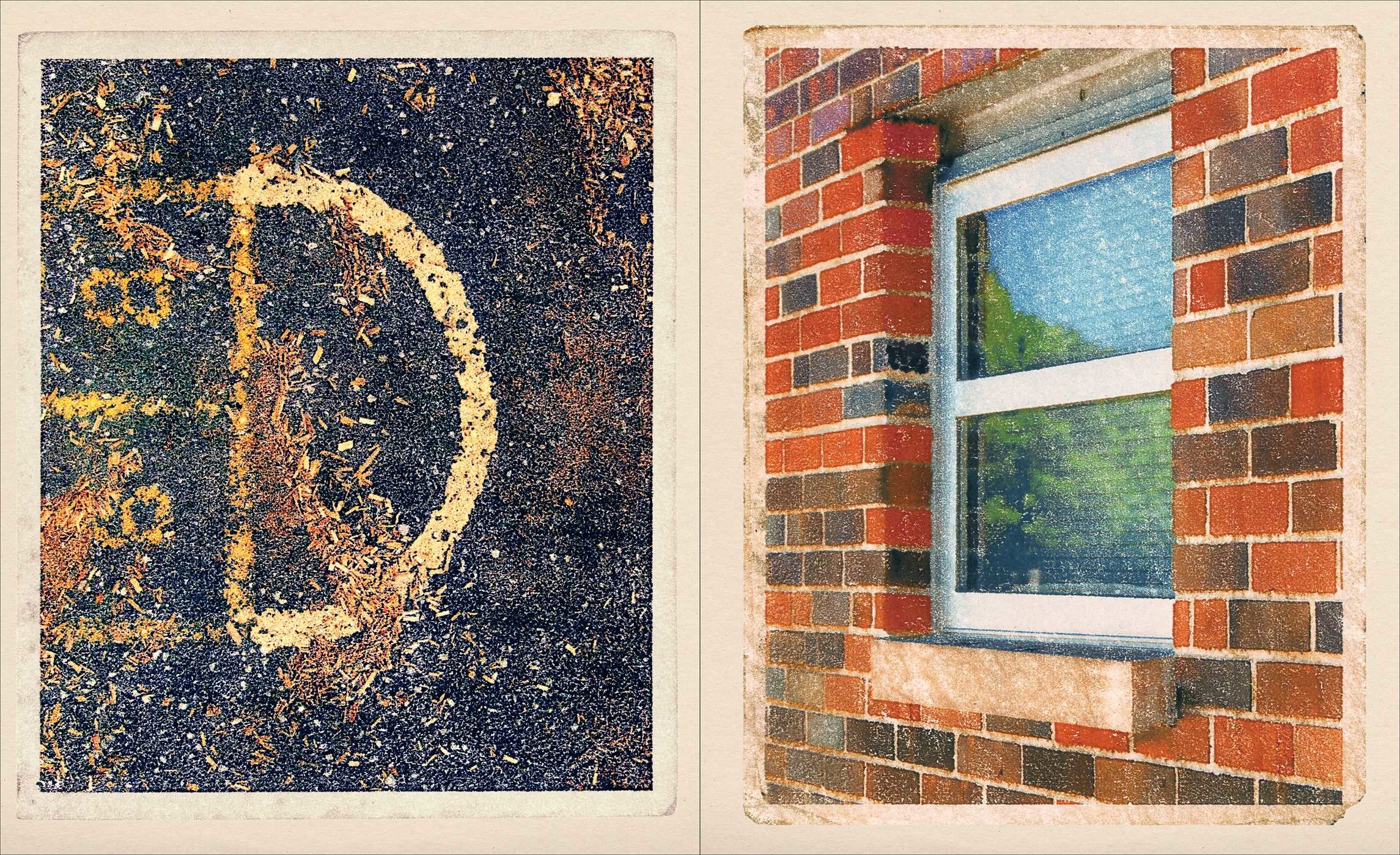 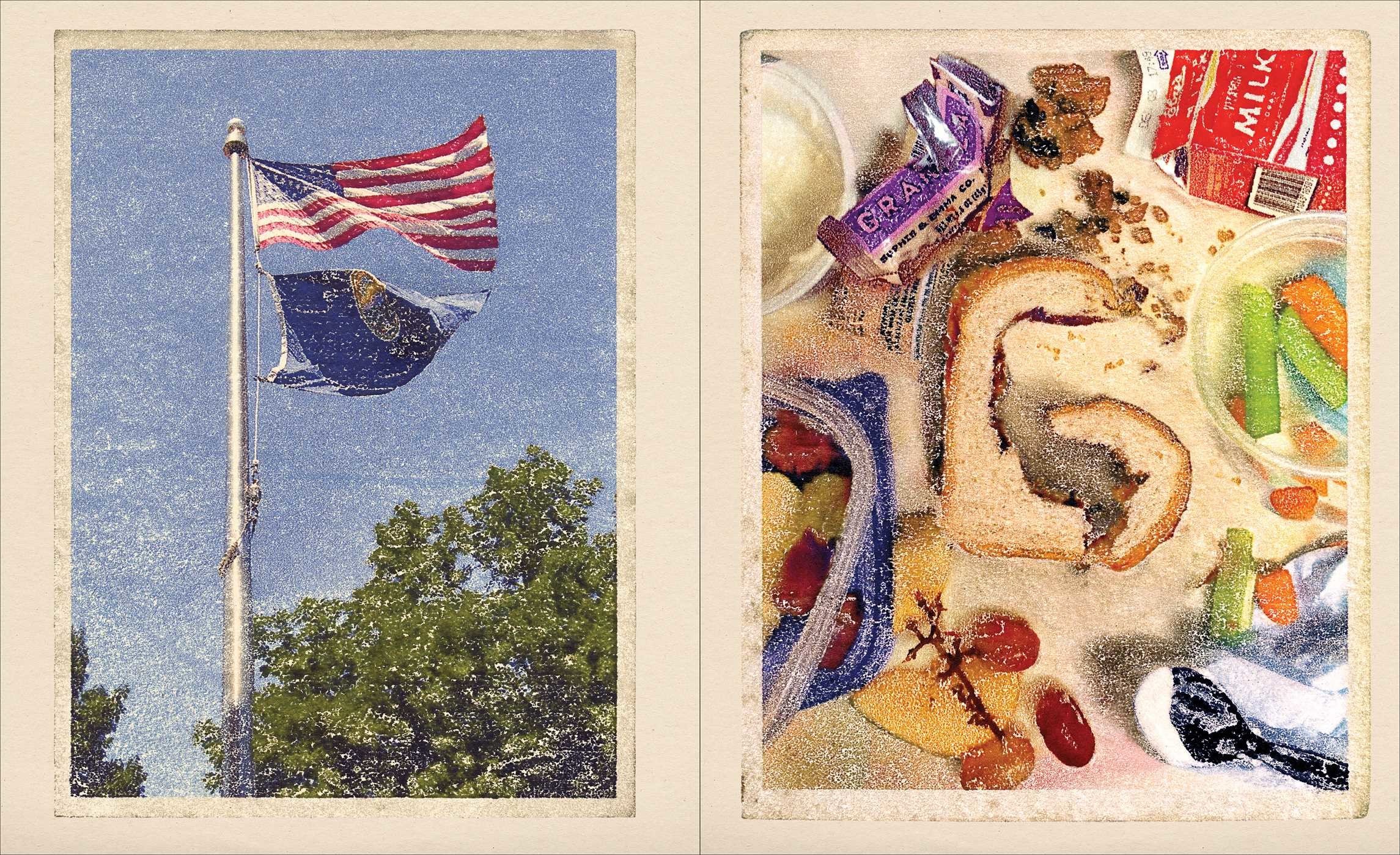 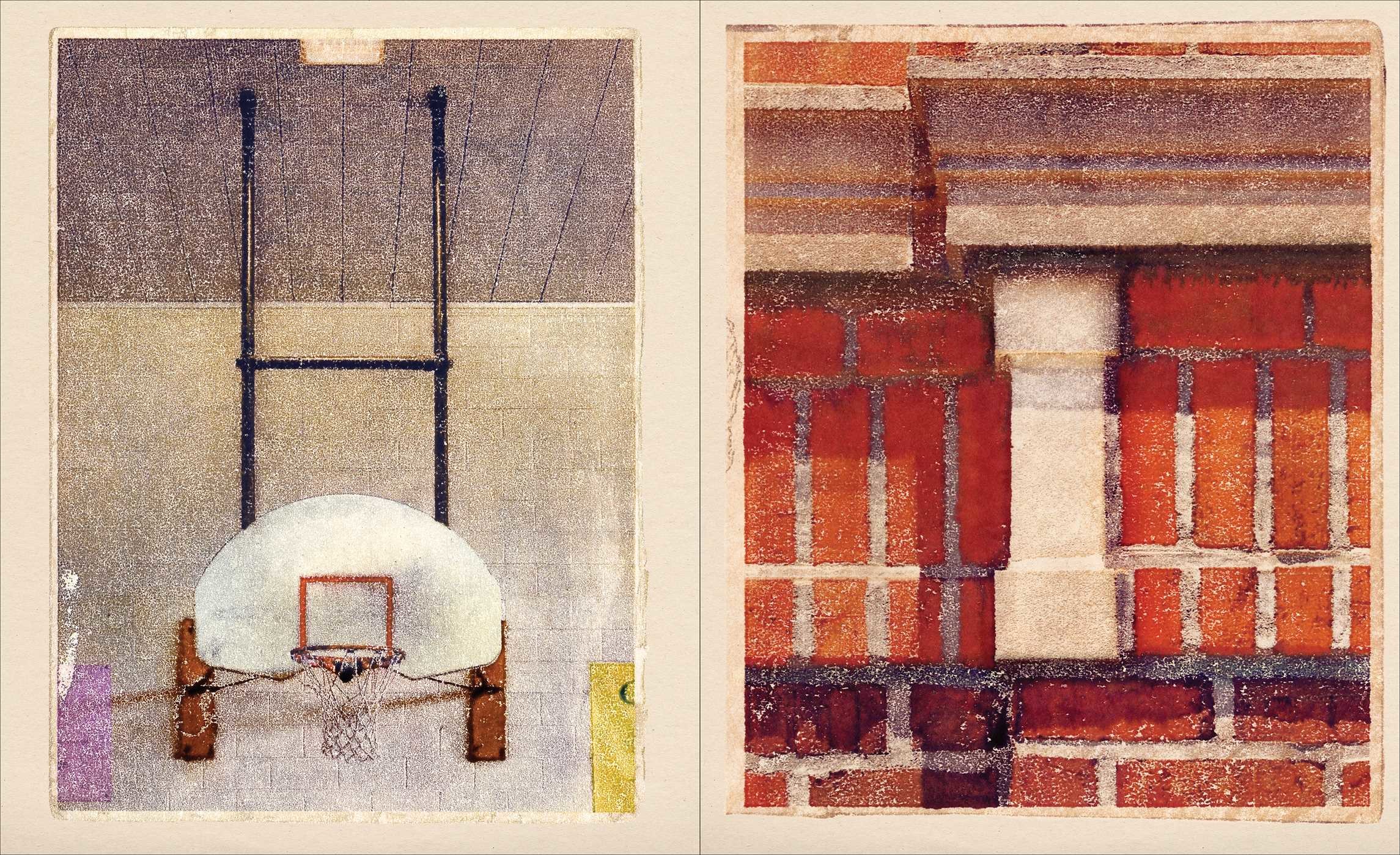 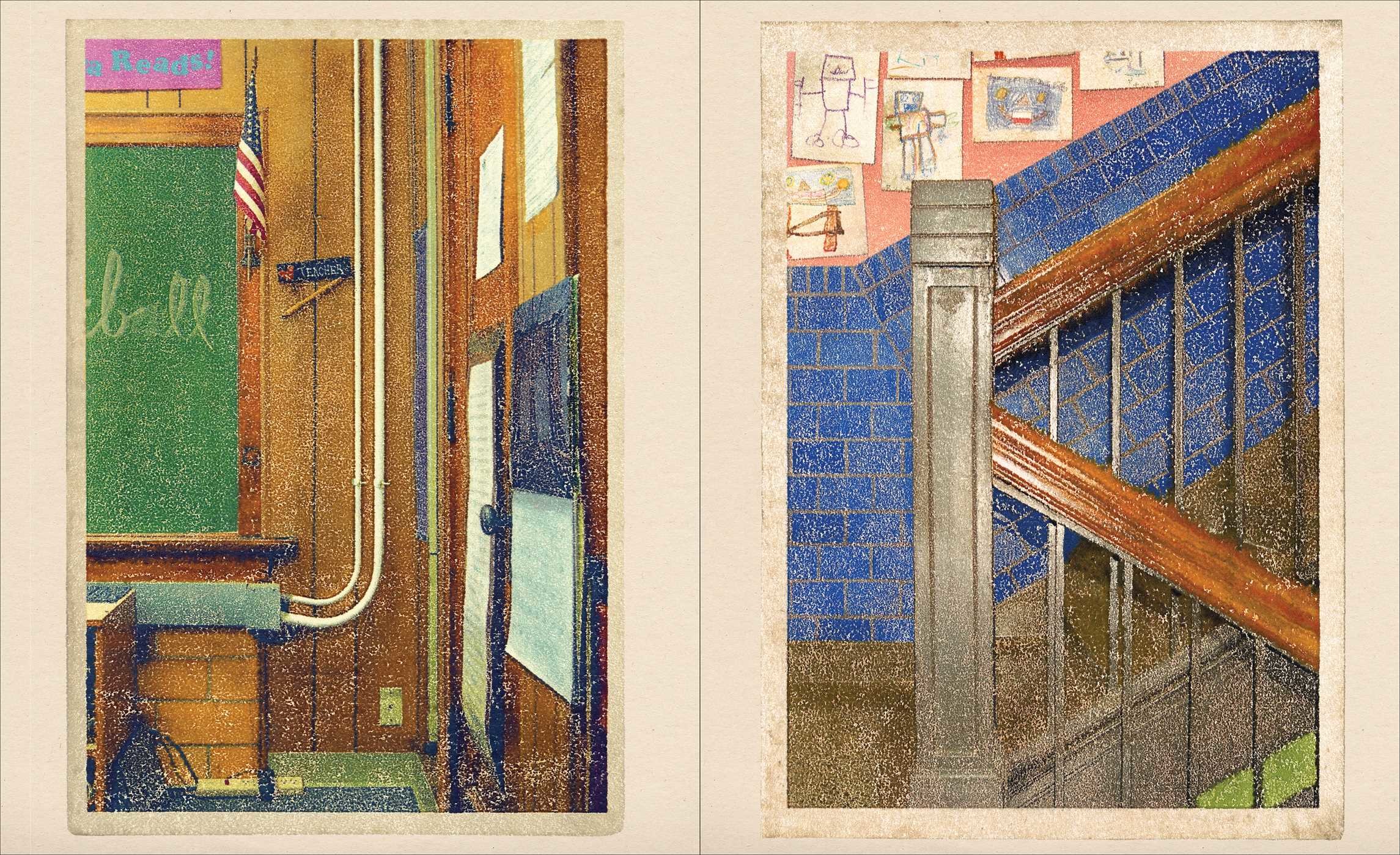 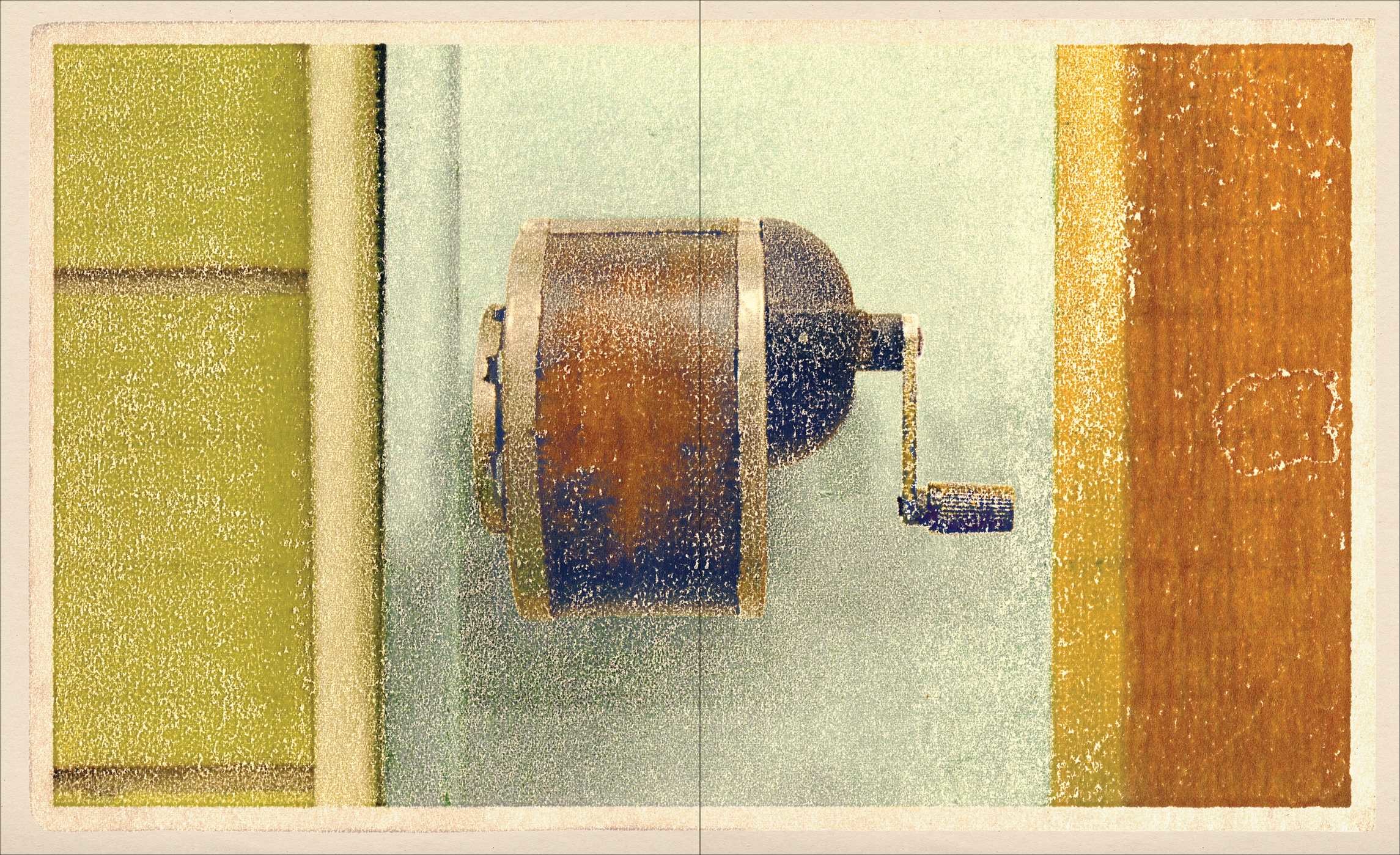 Explore the ins and outs of A to Z in an educational setting in this innovative picture book from the Caldecott Honor–winning creator of Alphabet City and A Is for Art.

Imagine a school. Any school. Be it your school, one from memory, or even a dream school. Then enter and embark on a journey of wonder and delight. Look closely. There’s a letter C in the curve of a globe, a little L in the handle of a pencil sharpener, or at recess, a vibrant yellow V in a geodesic climbing dome.

Can you find the letters on every page?

From inside the classroom to outside on the playground, Caldecott Honor artist and author Stephen T. Johnson renders the ordinary extraordinary with timeless imagery, inviting us to reexamine and rediscover our schools anew, and to find beauty and joy in the most unexpected places. 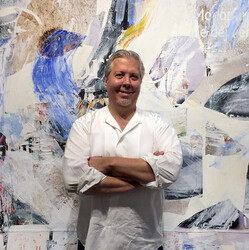 Stephen T. Johnson is the creator of such well-known children’s books as My Little Red Toolbox, My Little Blue Robot, and Alphabet City, recipient of a Caldecott Honor, a New York Times Best Illustrated Book of the Year, and a Society of Illustrators Gold Medal. His artwork can be found in permanent and public collections including the National Portrait Gallery at the Smithsonian Institution in Washington, DC, and the DeKalb Avenue Subway Station in Brooklyn, New York. Stephen is a professor at the University of Kansas, and he lives in Lawrence, Kansas.

Stephen T. Johnson is the creator of such well-known children’s books as My Little Red Toolbox, My Little Blue Robot, and Alphabet City, recipient of a Caldecott Honor, a New York Times Best Illustrated Book of the Year, and a Society of Illustrators Gold Medal. His artwork can be found in permanent and public collections including the National Portrait Gallery at the Smithsonian Institution in Washington, DC, and the DeKalb Avenue Subway Station in Brooklyn, New York. Stephen is a professor at the University of Kansas, and he lives in Lawrence, Kansas.

(STARRED REVIEW) The multiple-award-winning illustrator takes a page from his own book—Alphabet City (1995), that is—and creates a graphic-alphabet book that will have students searching their own schools for letters. In an introductory note, Johnson says his inspiration was a partially eaten peanut-butter-and-jelly sandwich his daughter brought home from school: it formed a perfect letter G (and is the basis for the page featuring that letter). No matter the inspiration, though, the artwork within will surely have readers looking at the world from all different angles and perspectives and appreciating the beauty in the mundane. A shadow on the fender of a yellow school bus forms a B; an ordinary double-paned window is an E when viewed from the side; the handle on a pencil sharpener is an L; two metal bookends next to one another form an M; an upturned toilet seat is a perfect U. Not all of these can be found in every school—Q is the center circle on a basketball court with a painted comet logo bursting through—but there are enough ideas here that kids will leave no stone unturned in looking for their own versions. Johnson's art consists of monoprints on paper with digital enhancements, and it has an old-fashioned photo feel, complete with grainy texture and whitish borders around every picture. Not only does Johnson once again take something simple and make it extraordinary, but he will inspire readers to do the same.

Johnson follows A Is for Art and his Caldecott Honor–winning Alphabet City with a series of letters found in a traditional brick school. Instead of the meticulous photorealistic images of Alphabet City, Johnson offers monoprints—grainy, meditative, and subtly colored, like sun-bleached photographs. There’s a sense of calm as the page turns and the next letter reveals itself. Every one, no matter how complex, appears quite naturally, without any contrivance, in settings most readers will recognize. Some letters are found in architectural details, as when the edges of a window frame are captured from an angle that makes them appear to be an E. The L is a pencil sharpener handle, the F is a flagpole with two flags on it, and the R is a twisted rope in a gym, its proportions classically correct. The images are oddly free of people—it’s like a school after hours or over summer vacation, when no one is there and one is free to explore. The lack of artificiality conveys the feeling that forms like these are all around us, waiting to be noticed.

Though alphabet books have proliferated in the years since Johnson published his Caldecott Honor book Alphabet City (Viking, 1999), his concept, which is about looking, not about language, remains distinctive. Twenty years after Johnson’s initial foray into the genre, there are still very few alphabet books that are about visual discovery. Each page takes readers to a schoolhouse and asks them to identify the alphabetic shape within the tableaux. A ladder in the library forms an “A,” while angled stairwell banisters become a “K.” The simple concept showcases the complicated process by which the artist creates his images. Johnson’s photorealistic monoprints are essentially a printed painting, digitally enhanced. To children, the illustrations may appear to be photographs. Of course, that is to lose sight of the shared experience—Johnson’s first seeing (and then painstakingly re-creating), and our looking. The school house context will create immediate opportunity for text extensions; used alongside similar titles with content area focus, Leslie McGuirk’s If Rocks Could Sing (Tricycle Press, 2011) and Krystina Castella’s Discovering Nature’s Alphabet (Heydey, 2006), this title will inspire young students to learn to look wherever they go. VERDICT A highly recommended title.–Lisa Lehmuller, East Providence School District, RI

It’sbeen twenty years since Johnson’s Alphabet City (BCCB 11/95), and nowhe’s returned with a new illustrative take on serendipitous alphabeticalappearances, this time looking at places audiences might find A through Z intheir own schools. Rather than the photorealistic art of the previous volume,this time the illustrations are grainy monoprints with some digitalenhancement; the letters still require some discernment to find and isolate (Lis the handle of a wall-mounted pencil sharpener, for instance), so thevignettes remain authentic in requiring tenacity and imagination while stayingtrue to likely school surroundings. The varying levels of difficulty enhancethe audience breadth; the conceptual pullback necessary to find F in a pair offluttering flags on a pole, for instance, is a step that could lead todiscussions of both art and science. While the visuals are intriguing, the realvalue here lies in encouragement to look closely and in new ways at a settingfamiliar to the point of invisibility; make sure you leave plenty of time for aletter-hunt around your own building.

– The Bulletin of the Center for Children’s Books, October 2015

Harking back to his first book (the Caldecott Honor–winning Alphabet City, rev. 11/95), Johnson shows the shapes of letters in everyday scenes, this time within a school, concentrating solely on letterforms rather than on words that begin with those letters. The illustrations (described on the copyright page as “monoprints on paper with digital enhancement”) have a grainy texture that gives them a softer, more handmade appearance than those in Johnson’s previous books. Each highly detailed image shows the letter standing out clearly but naturally, a balance of discovery and ease. The viewer is meant to solve a double puzzle on each page: what part of the school is the picture showing, and where is the letter? So, a stepladder forms the letter A, and is found in the library; a twisty slide forms the letter S, on the playground. Any child who knows his or her alphabet will be able to easily identify each letter, but a few of the locations are harder to decipher (and there is no answer key appended). The letter X is the weak link in this offering, possibly showing two dandelion stalks crossing each other on a playing field. This worthy companion to Alphabet City is likely to inspire a few students to discover and document their own local alphabets.