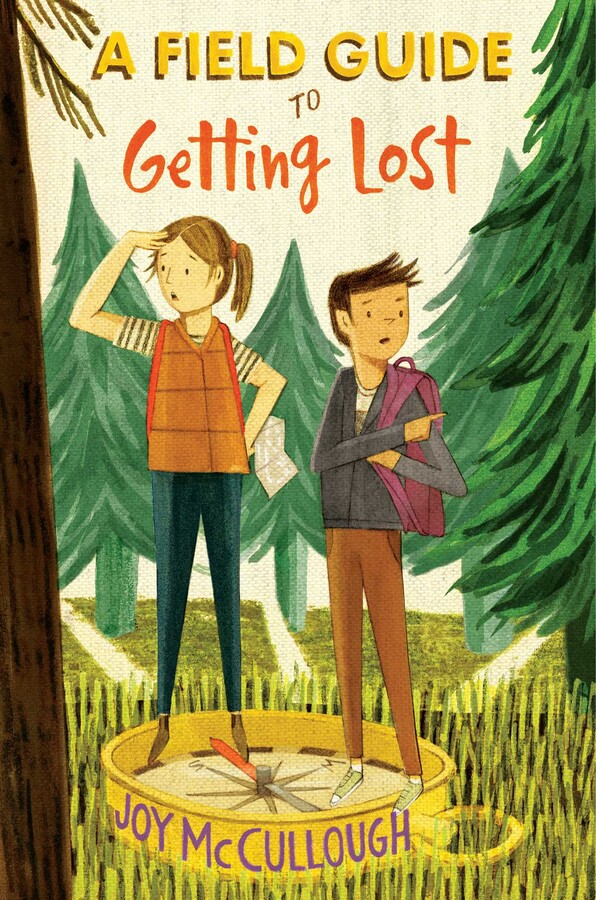 “A cozy and enjoyable read.” —Kirkus Reviews
“The likable cast and relatable premise will resonate with readers grappling with the uncertainty of change.” —Booklist

A girl with a passion for science and a boy who dreams of writing fantasy novels must figure out how to get along now that their parents are dating in this lively, endearing novel.

Sutton is having robot problems. Her mini-bot is supposed to be able to get through a maze in under a minute, but she must have gotten something wrong in the coding. Which is frustrating for a science-minded girl like Sutton—almost as frustrating as the fact that her mother probably won’t be home in time for Sutton’s tenth birthday.

Luis spends his days writing thrilling stories about brave kids, but there’s only so much inspiration you can find when you’re stuck inside all day. He’s allergic to bees, afraid of dogs, and has an overprotective mom to boot. So Luis can only dream of daring adventures in the wild.

Sutton and Luis couldn’t be more different from each other. Except now that their parents are dating, these two have to find some common ground. Will they be able to navigate their way down a path they never planned on exploring?

CHAPTER ONE Sutton
The robot had a mind of its own.

Thankfully, the robot was the size of a golf ball and was not likely to overthrow the human race. At least not anytime soon.

Sutton looked carefully at the code and tried again. But again the little robot refused to turn right when it was supposed to. Coding was always black and white—you wrote the code correctly and your program responded how you expected. Two plus two equaled four. Or, more to Sutton’s level, pi equaled 3.14159265359. There was no wiggle room, not like taste in books or music, which her dad was always telling her was subjective. Like that was a good thing.

In her last email, Mom had asked Sutton if she’d managed to get the bot through the maze in under a minute yet. Sutton had been surprised her mom remembered the robot. Even when Mom was in town, Sutton did all her school stuff with her dad. (Which mostly meant he looked over Sutton’s proposed research topics and gave them a thumbs-up.) Thrilled by her mom’s interest, Sutton had fudged a little and told her the robot had passed the test with flying colors. Which meant she needed to be ready to demonstrate when Mom came home next week.

When the robot refused to make the turn a third time, Sutton shoved her coding book off her desk. Somehow the loud thunk as it hit the ground helped release the tension that had been creeping up her spine. She picked it up and dropped it again.

“Whoa there, pumpkin.” Her dad appeared in the doorway, dressed for work—black suit, shiny shoes. “What did that book do to you?”

Sutton frowned. According to their synced calendars, her dad was not supposed to be at the orchestra tonight. “Why are you wearing your blacks? Is there a performance tonight?”

He hovered in the doorway for a second. “Can I come in?”

She nodded, and her dad sat on the end of her bed. “No show tonight. I have a date.”

Now her dad was the one refusing to follow the expected route. “A fancy date,” she observed.

A smile passed over his face, but he wrestled it back into a serious expression. “Yeah, you know I’ve been seeing Elizabeth for a while now. I thought it was time we stepped it up from hikes and coffee.”

Her father had gone out with Elizabeth seventeen times so far. Five hikes, four coffee shops, two combo hikes/coffee shops, two daytime movies, three evening movies, and miniature golfing. It seemed like their relationship had been stepping up for a while now, but then what did Sutton know about dating?

“We’re having dinner at Cielo downtown and then going to the opera. I talked to you about this at breakfast.”

This was vaguely familiar. “Was I fully prepared to engage?”

He chuckled. But it wasn’t funny. Sutton’s dad knew that until she had completed her morning routine—making hot chocolate, watering the apartment’s jungle of plants while her apple-cinnamon oatmeal cooked, then eating while she mentally recited the periodic table of elements and the United States presidents in chronological order and then alphabetical order—she was not fully prepared to engage. Anything he said during that time was unlikely to be processed. Neither of them were morning people—she thought he knew that.

“My apologies,” he said. “I should have known better. But, pumpkin, before you go upstairs to Mrs. Banerjee’s, there’s something I wanted to talk to you about.”

Sutton’s brain began to arrange the lines of code. Her dad was going on a fancy date with a woman he had seen seventeen times. He had forgotten their very well-established morning routine, which meant he’d been distracted, and he wanted to have a serious conversation with her.

Forget guiding her robot through a maze in a minute—now Sutton needed to figure out how to turn back time! Back to a time before her dad ever met this Elizabeth Paz. Because dating was one thing, but this sounded like it was leading to a proposal and a ring and a wedding and—

The lines of code scattered. “What? Why didn’t you let me talk?”

“So she should have talked to me, not you!”

Sutton was used to her mom being way down at the bottom of the southern hemisphere, but this time it had been almost a month since they’d talked. Between the time difference and questionable satellite phones at the research station in Antarctica where her mom studied emperor penguins, she almost never called.

“The thing is, honey, she needed to talk to me. To make sure I had things covered here.” He reached out and squeezed Sutton’s hand. “Her return has been delayed.”

Sutton snatched her hand back. She felt her ears getting hot and tears pricking at her eyes. Now she wanted to knock the entire bookcase over.

“I’m really, really sorry, pumpkin. The migration patterns are changing, you know, so the penguins are unpredictable and she really has to stay to monitor them…”

Sutton knew way more than she wanted to know about the stupid penguins’ migration patterns. But the only migration she cared about was her mom’s.

“Maybe I should have waited to tell you. Do you want me to stay home tonight?”

Of course she wanted him to stay home! He’d just ambushed her with terrible news, and on top of it, he was heading off on a fancy date that was leading nowhere good. If she showed him how upset she was about her mom, he’d stay home.

But Sutton wasn’t a super big fan of showing her feelings.

Also, logic said this course of action would only postpone a proposal. It wouldn’t stop it.

Sutton’s chest tightened. There were too many feelings to keep hidden. If her dad kept sitting there, staring at her with puppy-dog eyes of concern, she’d burst. “You should go.”

It wasn’t until after they had trudged upstairs to Mrs. Banerjee’s apartment, chased her yappy dog down the hall when the pup made a break for it, and said goodbye that Sutton had the worst realization of all: Her mom was going to miss her tenth birthday.

Joy McCullough lived in a castle in Scotland as a young child. Now she writes books and plays from her home in the Seattle area, where she lives with her husband and two children. She is the author of the middle grade novels Across the Pond and A Field Guide to Getting Lost. Her debut novel Blood Water Paint was long-listed for the National Book Award and was a William C. Morris Debut Award Finalist. Visit her at JoyMcCullough.com.

“With chapters switching narrative focus between the two protagonists, their inner turmoil is handled with sensitivity, creating a character-driven tale that doesn't skimp on plot. . . . The notable representation of female characters in diverse STEM fields is heartening. Minor perils and likable characters make for a cozy and enjoyable read.”

“Offers a realistic snapshot of modern families and the challenges that arise when trying to blend them. . . . The likable cast and relatable premise will resonate with readers grappling with the uncertainty of change.”

“McCullough realistically portrays Sutton’s need for order alongside the frustration that both feel when things go awry. Sweet communal details, such as food prepared by Sutton’s ethnically diverse neighbors and the gluten-free French toast that Elizabeth makes, bring this warm tale to life.”