LEO GOLDSTEIN was born in 1901 in Kishinev in the Bessarabian region (now Moldova) of Czarist Russia. Fleeing the pogroms, his family settled in New York City in 1906. He was the fourth child of 13 and went to work at a young age to help support the family. Leo was a talented amateur sculptor and artist, taking up photography when he joined the Photo League in the late 1940s. Goldstein embraced the social documentary tradition of the League and was influenced by legendary members Paul Strand, Lewis Hine, and Berenice Abbott, among others. He died in New York City in 1972. A small number of Goldstein's images have appeared in exhibits and publications of Photo League work, beginning with the seminal exhibit "This Is the Photo League" (1948-1949) and later in the book, This Was the Photo League, published in 2000. His work was included in "The Photo League, 1936-1951," an exhibition organized by Howard Greenberg at the Photofind Gallery in Woodstock, New York in 1985. One of Goldstein's images was also included in the 2011-12 exhibit at the Jewish Museum entitled "The Radical Camera: New York's Photo League, 1936-1951." Leo Goldstein's work is represented by the Howard Greenberg Gallery. JUAN GONZÁLEZ is an award-winning broadcast journalist and investigative reporter. A two-time winner of the George Polk Award, he is co-host of Democracy Now!, author of Harvest ofEmpire: A History of Latinos in America, and a founder and pastpresident of the National Association of Hispanic Journalists. He spent 29 years as a columnist for the New York Daily Newsfrom 1987 to 2016. He is currently the Richard D. Heffner Professor in Communications and Public Policy at the Rutgers School of Communication and Information. González was born in Ponce, Puerto Rico in 1947 and lived as a child in East Harlem during the period when the photographs in this book were taken. A. D. COLEMAN has published eight books and more than 2,500 essays on photography and related subjects. Formerly a columnist for the Village Voice, the New York Times, and theNew York Observer, Coleman has contributed to such periodicalsas ARTnews, Art On Paper, and Technology Review. His syndicatedessays on mass media, new communication technologies, art, and photography have been featured in such periodicals as Juliet Art Magazine (Italy), European Photography (Germany), and ArtToday (China). His work has been translated into 21 languages and published in 31 countries. Since 1995, Coleman has served as Publisher and Executive Director of The Nearby Cafe (nearbycafe.com), a multi-subject electronic magazine where his widely read blog on photography, "Photocritic International," appears.

Get updates about Leo Goldstein and recommended reads from Simon & Schuster.
Plus, get a FREE eBOOK when you sign up! 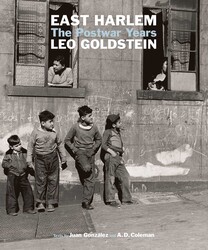