In the last five years, a small Miami advertising agency called Crispin Porter + Bogusky progressed from relative obscurity to being hailed as the top creative agency in the U.S., and arguably the world. The work of CP+B has consistently redefined advertising and changed an entire industry's definition of the term "media." CP+B uses a media-agnostic approach, producing work that is challenging, irreverent, hilarious, shocking, and always compelling-so much so that it often feels more like great entertainment than advertising. CP+B's clients have included the anti-tobacco organization Truth, MINI Cooper/US, AND1, Burger King, Molson USA, Virgin Atlantic Airways, Google, IKEA, EarthLink, GAP Men's, and MAXIM. In 2003, in an unprecedented sweep of the foremost awards in the world, CP+B took Grand Prix at Cannes, an O'Toole Award for Overall Creative Excellence from the American Association of Advertising Agencies, as well as the grand prizes at the CLIOS, EFFIES, Kelly's, OBIES, APG awards, and the One Show. The agency and its work have been profiled in The New York Times, The Wall Street Journal, USA Today, Forbes, Fast Company, Time, Newsweek, Advertising Age, Creativity, and Archive. In 2005, CP+B was named Agency of the Year by both Advertising Age and Creativity. Warren Berger has written about advertising for the past 15 years, as a contributor to Advertising Age, ADWEEK, Communication Arts, Graphis, and other industry publications (he first began writing about Crispin Porter + Bogusky in the early 1990s for Ad Age's Creativity and CA). His writing about advertising and media has also appeared regularly in mainstream consumer publications such as The New York Times, The Los Angeles Times Magazine, Wired, Reader's Digest, and Business 2.0. He is the author of the acclaimed book Advertising Today (Phaidon, 2001) and co-author, with Lee Clow and Jean-Marie Dru, of Disruption Stories (TBWA, 2005). He is the founder and current editor of the quarterly magazine One, published by the One Club for Art & Copy.

Get updates about Crispin Porter + Bogusky and recommended reads from Simon & Schuster.
Plus, get a FREE ebook when you sign up! 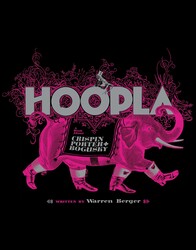