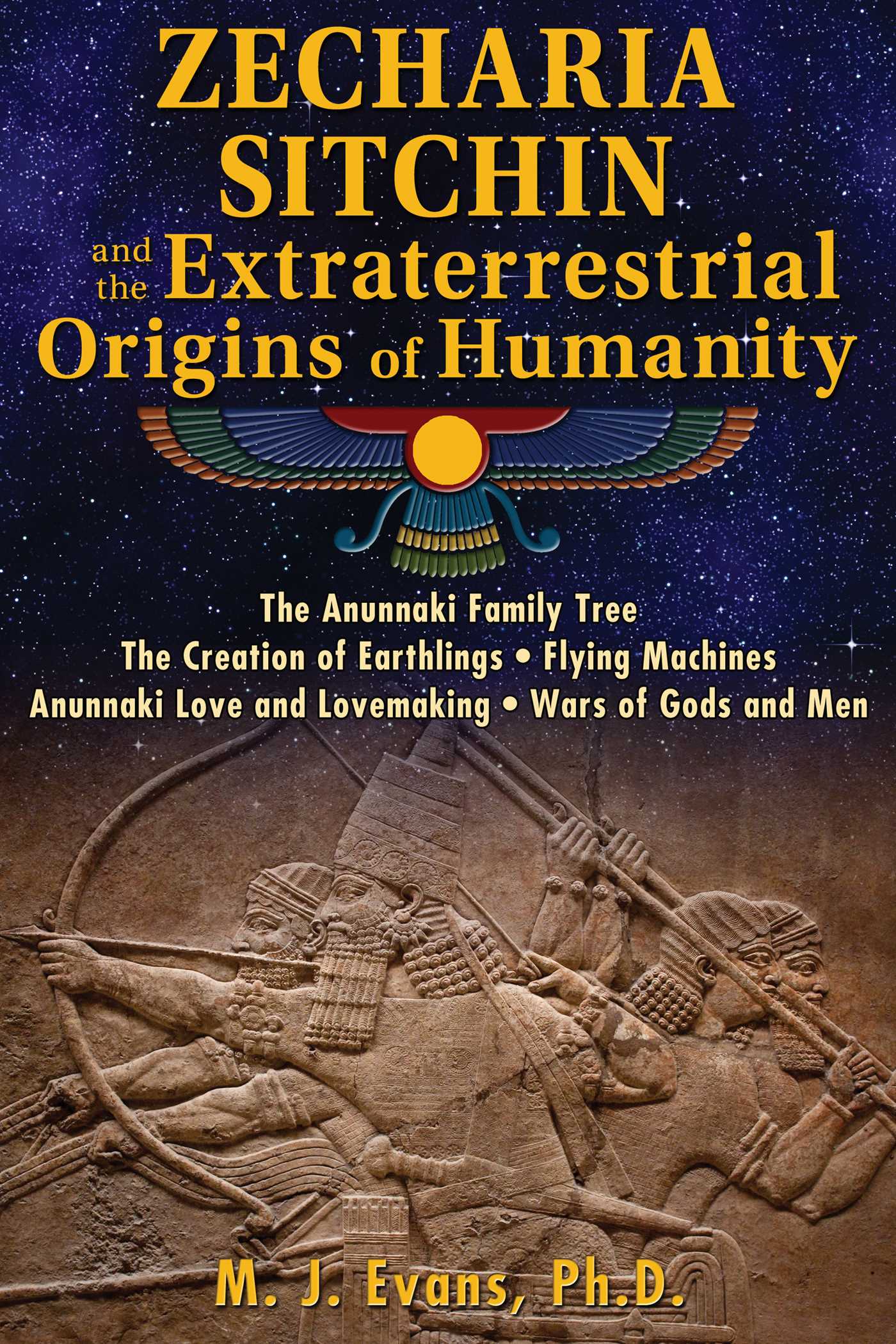 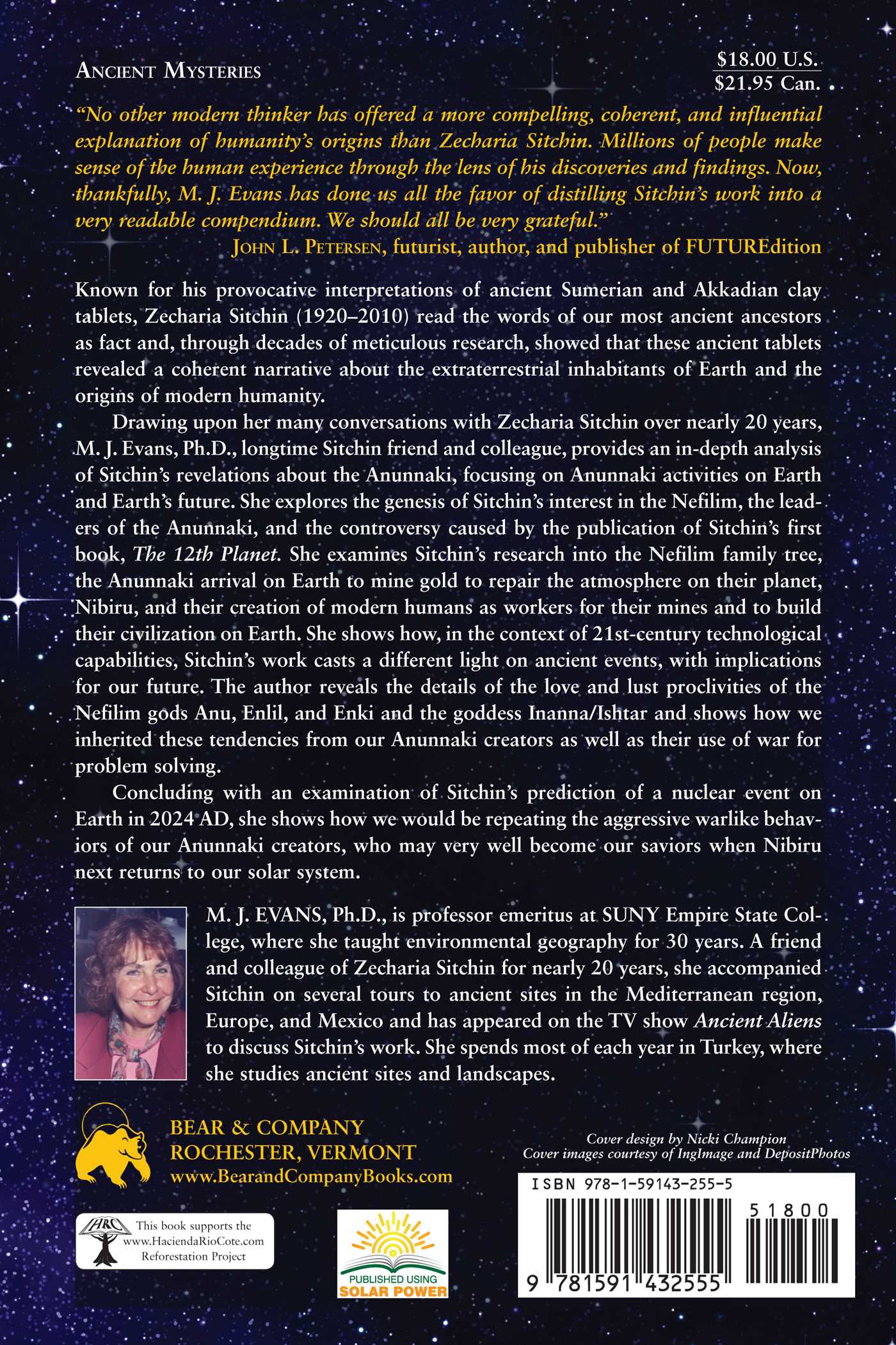 Zecharia Sitchin and the Extraterrestrial Origins of Humanity

An in-depth analysis of Sitchin’s revelations about the Anunnaki, early humanity, and Earth’s future

• Examines Sitchin’s research into the Anunnaki arrival on Earth, the lineage of the Nefilim, their space travel technology, and their creation of modern humans

• Written by longtime Sitchin friend and colleague M. J. Evans, Ph.D., and draws upon her research and personal discussions with Sitchin

Known for his provocative interpretations of ancient Sumerian and Akkadian clay tablets, Zecharia Sitchin (1920-2010) read the words of our most ancient ancestors as fact and, through decades of meticulous research, showed that these ancient tablets revealed a coherent narrative about the extraterrestrial inhabitants of Earth and the origins of modern humanity.

Drawing upon her many conversations with Zecharia Sitchin over nearly 20 years, M. J. Evans, Ph.D., longtime Sitchin friend and colleague, provides an in-depth analysis of Sitchin’s revelations about the Anunnaki, focusing on Anunnaki activities on Earth and Earth’s future. She explores the genesis of Sitchin’s interest in the Nefilim, the leaders of the Anunnaki, and the controversy caused by the publication of Sitchin’s first book, The 12th Planet. She examines Sitchin’s research into the Nefilim family tree, the Anunnaki arrival on Earth to mine gold to repair the atmosphere on their planet, Nibiru, and their creation of modern humans as workers for their mines and to build their civilization on Earth. She shows how, in the context of 21st-century technological capabilities, Sitchin’s work casts a different light on ancient events, with implications for our future. The author reveals the details of the love and lust proclivities of the Nefilim gods Anu, Enlil, and Enki and the goddess Ishtar/Inanna and shows how we inherited these tendencies from our Anunnaki creators as well as their use of war for problem solving.

Concluding with an examination of Sitchin’s prediction of a nuclear event on Earth in 2024 AD, she shows how we would be repeating the aggressive warlike behaviors of our Anunnaki creators, who may very well become our saviors when Nibiru next returns to our solar system.

The Creation of Earthlings

How did humans come to live on Earth? This question is challenging--wrapped as it is in debate. It also is as exciting a question as it is captivating. This query’s wording presumes that a human species lived elsewhere in the universe and someone or something brought humanoid life here. Could that be possible? Or are there other explanations to be found for human existence on planet Earth?

While Zecharia Sitchin does not entertain this question in just the way we first posed it, his research into the ancient clay tablet writings does tell us “All the Sumerian texts assert that the gods created Man.” Also the biblical evidence indicates that man was not a god nor was he created in the heavens. It was clear that while humans lacked the godly characteristics of “knowing” and “longevity,” they were “in all other respects created in the image (selem) and likeness (dmut) of [their] Creator(s). The use of both terms in the text was meant to leave no doubt that Man was similar to the God(s) both physically and emotionally, externally and internally.”

These comments are very enlightening. However, Sitchin goes on to wonder “how could a new creature possibly be a virtual physical, mental, and emotional replica of the Nefilim? How, indeed, was Man created?” We will follow a fact-focused exploration into Sitchin’s research to see where it leads and what we can learn about this fascinating topic of the creation of humans.

The Debate about Our Origins

Undoubtedly, knowing the origins of the human species that now populate planet Earth is important. This topic has been long studied by physical anthropologists, genetic scientists, and others curious about how humans originated. It has also prompted heated disputes. We will attempt to unwrap this contentious debate here. Essentially this discussion asks: Did the God of the Bible “create” humans from some substance found on Earth? Or did the forces of nature work a progressive developmental change on a primeval creature who, very slowly, underwent genetic change by processes called mutation and natural selection, as put forward in the writings of the English naturalist Charles Darwin?

While evolutionary scientists may believe that human genetic change has been occurring across the thousands of millennia of life on Earth, evidence to lock down this explanation of how progress (or change) occurs in humans is scarce. Would such slow changes lead to today’s intelligent humans? Even if one looked for cognitive change beginning with Stone Age man (600,000 or even fewer years ago), it is doubtful that evolutionary change would provide unambiguous evidence that would result in today’s intellectually capable and creative humans. There just has not been sufficient time for the types of change that differentiate primitive beings (Neanderthal) from the modern (Cro-Magnon) human species--Homo sapiens sapiens--to have occurred.

If Darwin’s explanation is not realistic, what other source can be used to document the origin of modern humans? Is it possible there is another answer to how modern intelligent humans came into existence? Sitchin’s research tells us that the answer to that question is “yes.” According to him there is biblical and anthropological evidence to support another explanation. In his characteristic way, Sitchin followed his inclination to find answers to clues contained in the ancient clay tablet records; he was able to penetrate the tablet language to uncover evidence documenting that Homo sapiens developed by genetic manipulation carried out by the Nefilim--those advanced space travelers who arrived on Earth from another planet some 445,000 years ago and did their genetic work 300,000 years ago.

The Sitchin Evidence of Human Creation

Sitchin tells us that the evidence clearly indicates that deliberate genetic modification explains the appearance of modern intellectual humans on Earth. He weighs in as a critic of the sweeping implications of the Darwinian explanations, and his message helps us see the flaws in the reasoning that points to a slow developmental trajectory.

Evolution can explain the general course of events that caused life and life’s forms to develop on Earth from the simplest one-celled creature to Man. But evolution cannot account for the appearance of Homo sapiens, which happened virtually overnight in terms of the millions of years evolution requires, and with no evidence of earlier stages that would indicate a gradual change from Homo erectus.

The tablet evidence clearly indicates that Homo sapiens was a result of genetic manipulation by a Nefilim scientific team because they needed our kind (intelligent willing workers) to rectify a labor shortage at their gold mines.

The following excerpt is spoken by the leader of those space travelers:

I will produce a lowly Primitive;
“Man” shall be his name.
I will create a Primitive Worker;
He will be charged with service of the gods,
That they might have their ease.

The advanced scientific knowledge of the two Nefilim scientists--Enki and Ninhursag--was used to solve a very real labor problem, and we humans are the legacy of their creativity. Importantly, they did not develop the human being out of nothing. Sitchin’s words here give us the most profound statement we find in any of his several books, and they will serve as a beacon to guide our inquiry deeper into this topic. He makes it clear that the human “origins debate” is not an either-or issue, but derives, in actuality, from both explanations. Sitchin states:

Man is the product of evolution; but modern Man, Homo sapiens, is the product of the “gods.” For, some time circa 300,000 years ago, the Nefilim took ape-man (Homo erectus) and implanted on him their own image and likeness.”

In plain words, humans evolved and were created. An evolved being was used as the raw material, and genes from an Anunnaki were added to create the perfect being--us. Enki and Ninhursag did this through using their knowledge of genetic engineering. This information is profound and carries deep implications.
M. J. Evans

M. J. EVANS, Ph.D., is professor emeritus at SUNY Empire State College, where she taught environmental geography for 30 years. A friend and colleague of Zecharia Sitchin for nearly 20 years, she accompanied Sitchin on several tours to ancient sites in the Mediterranean region, Europe, and Mexico and has appeared on the TV show Ancient Aliens to discuss Sitchin’s work. She spends most of each year in Turkey, where she studies ancient sites and landscapes

“No other modern thinker has offered a more compelling, coherent, and influential explanation of humanity’s origins than Zecharia Sitchin. Millions of people make sense of the human experience through the lens of his discoveries and findings. Now, thankfully, M. J. Evans has done us all the favor of distilling Sitchin’s work into a very readable compendium. We should all be very grateful.”

Zecharia Sitchin and the Extraterrestrial Origins of Humanity