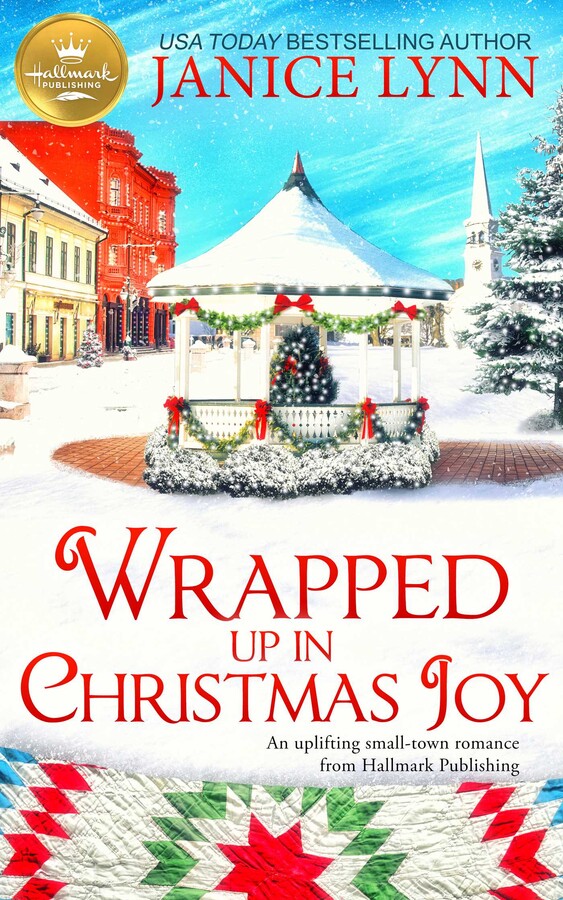 Part of Wrapped Up in Christmas
By Janice Lynn
Published by Hallmark Publishing
Distributed by Simon & Schuster
LIST PRICE $15.99
PRICE MAY VARY BY RETAILER

When a quilt shop owner
finds a former Marine’s journal,
she longs to heal his heart…


When Sophie Davis sorts through a box of donated books to her church, she’s surprised to discover a soldier’s journal. As the daughter of a veteran who watched her father struggle over the years, she feels a deep connection to the man who wrote the emotional entries.

Former Marine Cole Aaron battled to find peace after returning to civilian life. He’s always needed to protect others. Now, fighting fires in Pine Hill, Kentucky helps him put out the demons within him. When Sophie shows up at the fire hall with his journal from when he’d first returned stateside, Cole can’t believe it was in the box he’d donated. Not wanting to face painful memories, he tells her to trash it.

Sophie and Cole are drawn together as they both volunteer for their community, but it’s hard for Cole to let down his guard, and he doesn’t need anyone’s pity. After all he’s been through in the past, can he find faith in a more hopeful future…one touched by joy?

Cole’s gaze dropped to what Sophie held. A sucker punch rammed into his stomach, knocking his breath out of him and leaving him going-to-retch-his-insides-out nauseated.

He could stare down an enemy holding an AK-47 and not flinch, but the book that Sophie held made his knees weak.

“Where did you get that?” he growled, barely managing not to snatch the book from her hands to hurl it aside, like a grenade that needed to be thrown as far away as possible for everyone’s safety.

Sophie winced. He felt a pang of regret over the harsh tone he’d used, but he couldn’t formulate words to apologize. The beauty from the BBQ had his journal.

“I found it at Pine Hill Church in a box of books.”

The sinking sickness pitched back and forth in his stomach, making him wish he’d forgone his protein shake that morning. His journal had been in the stuff he’d dropped off at the church?

“I, well, when I realized whose it was…” Her nervousness was palpable as she sank her teeth into her lower lip and looked up at him with hesitation. “I knew you’d want it back.” She gave a little shrug of both shoulders. “So here I am.”

“You were wrong.” Bile rising in his throat, he gestured to the abomination she held. “I don’t want that.”

Further confusion darkened her eyes. “But…”

“Look.” He ran his fingers through his hair, still not completely used to having anything more than stubble after years of keeping his dark hair buzzed. “I’m sorry you wasted your time. You should’ve just thrown it out. That book’s nothing but garbage.”

Lots and lots of scribbled garbage a chaplain had suggested he get out of his head by pouring it into the journal the man had gifted to Cole. Not for the first time, Cole regretted giving in to that advice. Seeing everything written out just made him more disgusted with himself, causing the memories to hang even heavier on his shoulders.

Why hadn’t he burned the book rather than packing it with the things he’d brought with him to Pine Hill? The mere act of destroying the journal might have gone further in annihilating his memories than putting them onto paper ever had.

“But,” Sophie began again, her eyes wide and her voice a little trembly. “But it’s…I mean, well, it’s—”

“Garbage,” he repeated, cramming his hands into his pants pockets and clenching his short nails into his palms as deeply as they’d go. He just wanted away from their conversation, away from the book that felt like his personal Achilles’ heel—the weak spot in his defenses that could ruin everything good he’d patched his broken life with. “Throw it away.”

At her indecision, understanding dawned.

“You read it, didn’t you?” Cole felt like a fool for not immediately realizing. A new wave of nausea spread through him, popping sweat beads out over his skin despite the crisp November air.

Wide-eyed, her lips parted but no sound came out. No matter. She didn’t need to say the words. The truth was written all over her face.

One of the things Cole most enjoyed about being in Pine Hill was that no one knew of his past. Chief had some idea, and the guys had picked up on a little thanks to Cole’s occasional nightmares, but none of them were in on the nitty-gritty details.

In Pine Hill, he was seen as a man who volunteered his time and energy to everything the firehall was asked to participate in; a man who put his life on the line to save others.

If, while out battling those fires, he fought inner demons, trying to quench them the way he and his crew squelched nearly uncontrollable blazes from time to time, well, no one needed to know that but him.

Only, Sophie had read about his bleakest moments—and his biggest mistake. She knew the truth.

“I’m sorry,” she said, looking truly remorseful that she’d pried between the pages of his private hell. “I opened it thinking I might find a name so I could return it, but there wasn’t one.” Grimacing, she continued. “And, well, the truth is that once I started reading, I couldn’t stop.”

As much as he wanted to look away, he didn’t. Jaw locked tight, he kept his gaze unyielding as it met hers. He could handle whatever judgement she placed on him.

Lord knew she couldn’t judge him any more harshly than he judged himself.

USA Today bestselling author Janice Lynn loves to spin a tale that puts a smile on her reader’s lips and a tear in their eye as they travel along her characters’ journey to happy ever after. Her favorite read is one with a strong heroine who is able to laugh at herself and a hero who appreciates the heroine's strengths and imperfections.

Janice’s books have won numerous awards including the National Readers' Choice Award and the American Title, but she is most proud of her seven children. From actor, engineer, nurse, student, to Army National Guard, they are her greatest accomplishments.

Janice lives in Tennessee with her family, her vivid imagination, lots of crafting and quilting supplies, and numerous unnamed dust bunnies.

Part of Wrapped Up in Christmas
By Janice Lynn
Published by Hallmark Publishing
Distributed by Simon & Schuster
LIST PRICE $15.99
PRICE MAY VARY BY RETAILER

More books in this series: Wrapped Up in Christmas