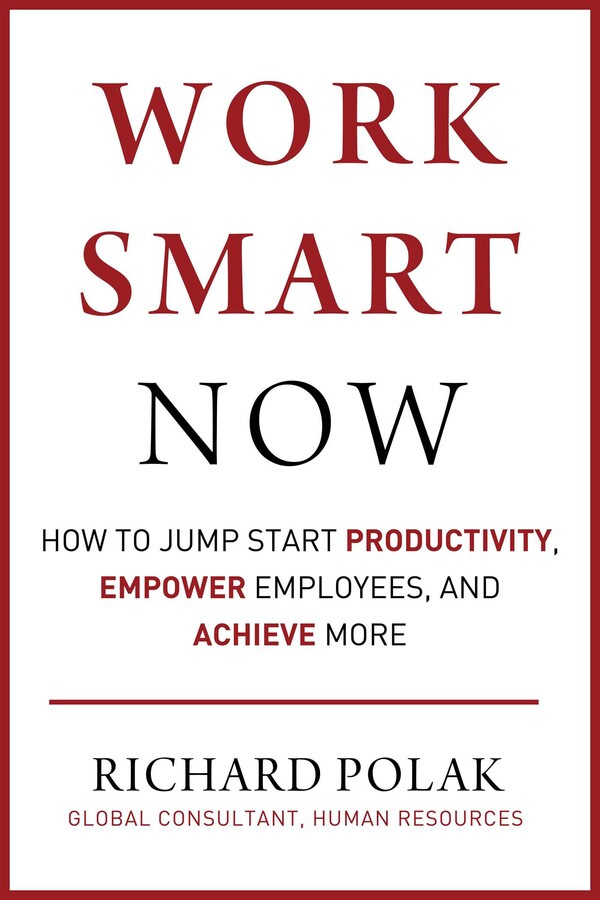 How to Jump Start Productivity, Empower Employees, and Achieve More

From one of the top HR specialists in the world comes this much-needed guide to help people maximize productivity and increase revenue.

Whether it’s in corporate America or in our own living rooms, people are wasting time. From the minute we wake up and check our Facebook page or emails—before we even crawl out of bed—to late at night when we stay up longer than we should, watching our favorite show.

There’s a precise moment that falls between working enough hours to be productive and working too many hours, yielding a diminishing marginal return. The difference between the person able to master this and most Americans that fail miserably at it is quality of life! If one continues to work past this moment, a negative return will ensue, and that negative return produces guilt. It lowers the amount of time for recreational activities and spending time with family. We’ve siloed productivity to our work life, however; the impact on our personal life is often loss.

An alarming 39% of workers in high-tech companies believe they are depressed, as reported by PC Magazine in December 2018. 72% of people who have daily stress and anxiety say it interferes with their lives—anxiety and stress alone have reduced productivity by 56%. More than 80% of people have experienced some form of anxiety, stress, or depression in the workplace. People are spending more time at work than at home or with their loved ones; or, if they are at home, they are working. They are always “on.” As a result of this disparity, people are not fully living their lives. And the “work-life balance” marketed by some HR consulting firms and employers simply does not work. It’s all work and no life! Studies have also proven that when people are unhappy in their personal lives or careers, their productivity goes down and everything and everyone around them suffers. This causes a domino effect, which trickles into every area of their lives.

Previous generations used to say, “Work harder,” but we’ve now learned we must “work smarter.” Polak has practiced and tested his methods in hundreds of opportunities and has been paid millions by the largest corporations in the world to share these tools. He feels that every individual and business should have these tools, and will share them with us here.

Time is our second-greatest asset. We all run out of it eventually, so we need to use it wisely. Whether it’s in the office or in the living room, none of us is getting the most out of the time we’ve been given. From the moment we wake up and check our Facebook page or emails—before we even crawl out of bed—to late at night when we stay up longer than we should, watching TV or working. From the government worker in Cairo who averages 10 to 20 percent less productivity a day (according to many studies) to the sales guy in Cincinnati who takes an extended lunch, has trivial chitchat with his or her coworker, and checks his or her email too often (studies show that it is more productive to check your email only twice a day). Lack of productivity, which extends to lack of engagement, is a crisis in much of society. Workers are pushed beyond their limits. This is proven by studies that show increased dissatisfaction at work and higher rates of depression and suicide. It’s simply bad business to overwork people. People become less productive and companies lose money and risk losing employees. In America alone, the average business loses 10 to 25 percent in revenue due to this phenomenon. It’s only now that we are able to measure it, analyze it, and make changes.

For more than 40 years, I’ve been advising organizations around the world. For most of that time, I owned and operated one of the largest privately held global consultancies, advising companies such as Google, Sony Pictures, Hilton Hotels, and McDonalds on international expansion and productivity in more than 90 countries. I became the specialist, flying around the world, building bridges between employees and their employers through innovative human resources (HR) tools that brought the two groups together. I became an HR forensics investigator, hired by numerous companies to uncover rogue employees who were stealing money from the company and breaking numerous laws in the country. Some were just flat out mobsters. My goal, as directed by the CEOs, was to stop the corruption immediately and prevent the news from landing on the front page of the New York Times. I’m pleased to report that not one of my clients ever ended up in the news concerning these sensitive issues.

I have learned valuable tools that I utilize in my personal business as well as advise for the businesses of others. Here are my two definitions of productivity:

“Get More Done in Less Time—and Do It with Joy”
“Do Only the Things That Only You Can Do.”

Previous generations said, “Work Harder,” but now we’ve learned it really is “Work Smarter.” I have successfully tested my methods in hundreds of opportunities. Every individual and business should have these tools.

This is why I wrote Work Smart Now, to condense many decades of knowledge into an easy-to-read book that every top-performing individual, CEO, or high-level executive can refer to for guidance. I hope this book is helpful to you. It has certainly been a joy to write, and the lessons contained herein have been helpful to me in making my whole life more productive.

So, if time is our second-greatest asset, what is our first? It’s our integrity. You can have all the time in the world, but without integrity you have nothing.
Richard Polak

“Richard is a recognized leader and expert in International Business and Global HR issues. He presents perspectives and strategies on positively increasing productivity in ways that acknowledge and promote balance and well-being.”
—Barry Coleman, Chief Operating Officer, Realeyes

“Polak has a wealth of experience in global HR. He has developed a unique view on increasing productivity without adding stress."
—David Weiss, screenwriter, trustee, health and pension plan, Writers Guild of America

"Thoroughly 'reader friendly' in commentary style, organization, and presentation, Work Smart Now: How to Jump Start Productivity, Empower Employees, and Achieve More is especially recommended to the attention of business managers and corporate executives charged with the responsibility of inspiring and aiding employees (and themselves) to be as efficient and productive as possible. A welcome addition to community, corporate, college and university library Business Mentoring, Management, Coaching, and Workplace Culture collections and supplemental studies curriculums."
—Midwest Book Review

"In this book Richard Polak combines the analytical and the personal in a way I have rarely seen. He taps into the wisdom of both his left and right brain, addressing numbers as numbers and people as people, in a uniquely instructive and useful way. It’s a terrific book.”
—Joel Shine, CEO, Woodside Homes

"Polak has written a unique book that will easily increase revenue for any organization. The principles and processes can make a material difference to a company’s bottom line. A must read for CEOs or HR Directors.”
—Rocky Lang, President, Harbor Light's Productions

How to Jump Start Productivity, Empower Employees, and Achieve More