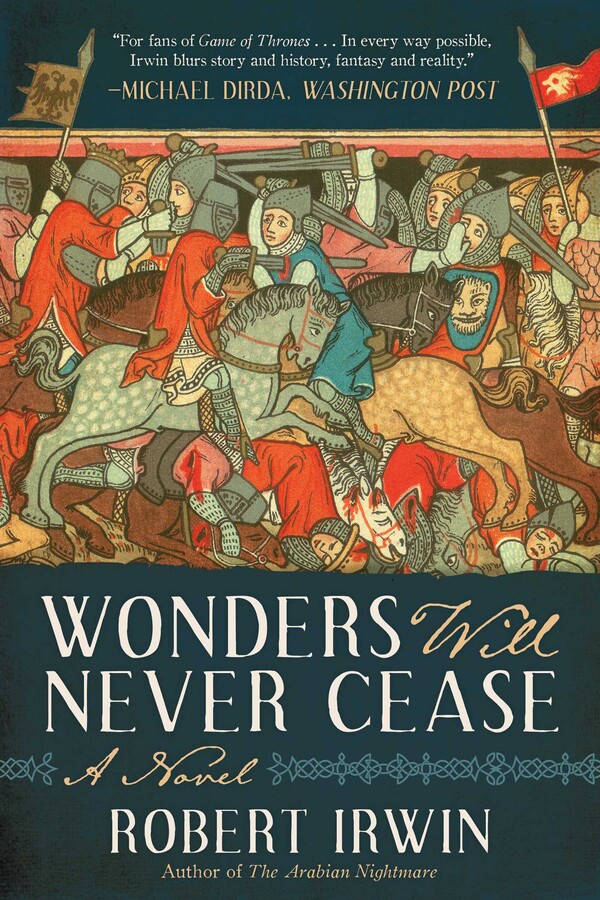 By Robert Irwin
LIST PRICE $17.99
PRICE MAY VARY BY RETAILER

"For Fans of Game of Thrones" (Michael Dirda, Washington Post), An Exhilarating, Magical Blend of History and Fantasy Set during the Original Game of Thrones

Beginning with the Palm Sunday battle of Towton, the bloodiest ever fought on English soil, Wonders Will Never Cease relates the fabulous adventures of one man and his noble family amid the chaos and political intrigue that beset England during the War of the Roses, when two great houses battled for control of the throne. Anthony Woodville, Lord Scales and brother to the future queen, Elizabeth Woodville, seems to die during that battle and be resurrected. While dead, he witnesses the Grail ceremony last seen during the age of King Arthur, before England was cursed by war and Hell so filled with bodies that the dead now walk the land.

What he wakes to and witnesses for the rest of his life as he defends his king is a ceaseless stream of wonders: a talking head that predicts the future, a miraculous cauldron, a museum of skulls, the Swordsman's Pentacle, alchemists and wizards, and plenty of battles, sieges, swordplay, jousts, treachery, murder, beheadings, and horrific torture. His own family is rumored to be descended from the fairy Melusine and imbued with her dragon’s blood. And there are lots of other stories too—some so porous that their characters enter history and threaten their maker.

Robert Irwin is a novelist, historian, critic, and scholar and is a fellow of the Royal Society of Literature. He is the author of seven novels, among them The Arabian Nightmare (1988), which Neil Gaiman has called "one of the finest fantasies of the last century." Robert Irwin resides in England.

"For fans of Game of Thrones . . . In every way possible, Irwin blurs story and history, fantasy and reality. . . . The wonders never cease."—Michael Dirda, The Washington Post

"I have friends who love smart, deep fantasy novels, and can never find enough. Robert Irwin's novel The Arabian Nightmare was one of my favourite books of the early 1980s and one of the finest fantasies of the last century. His newest novel, Wonders Will Never Cease, is as erudite and well-constructed a historical fiction as The Arabian Nightmare, but is set in a medieval England that never quite was, and uses stories and fictions to illuminate and to make us gasp with awe. It's also often genuinely funny and quite beautifully written." —Neil Gaiman in Authors at Christmas

“In this historic game of thrones, fortunes are made and lost on a person’s ability to survive his own legend. . . . Wonders Will Never Cease captures English medieval life like never before in a narrative of harsh consequences, religious ritual, oral tradition, and dream logic both alien and familiar.”—Foreword

“Entertaining . . . History and fiction are interlaced throughout with dexterity and wit.”—Booklist

“Fun and engaging . . . Cleverly mixes the historical and the fanciful in bizarrely amusing ways.”—Library Journal

"He intertwines his central plot with myths and digressions worthy of Homer to transform what could easily be a dull report into something more mythical and magical. With disturbing tales, gruesome details of torture, a talking head and a museum of skulls, this novel will keep you in the Halloween spirit." —Buzz Magazine

"Robert Irwin's latest novel has much in common with Game of Thrones. Both are based on the gory struggle of the Wars of the Roses, both inject large amounts of magic and the occult into their narratives, and both are hugely enjoyable, fast-moving and filled with dark humour. . . . As one character observes: 'The real world is a poor thing compared to the stories that are told about it.'" —Prospect Magazine

"The novel is a sort of marriage between A. S. Byatt and Terry Pratchett: one you can enjoy greatly on the first reading, but which will be even better second time round, as it's so densely packed with learning and allusions. . . . Bravo." —Tibor Fischer, The Guardian

"Extraordinary . . . After closing this book, its spell still lingers. Irwin has brilliantly refashioned medieval history as a myth for our time." —Andrew Crumey, Literary Review

"One might conclude from these descriptions that Robert Irwin believes history and fiction to be indistinguishable. But this rather pedestrian interpretation fades away beside the enthralling delights of narrative, life itself to Scheharazade. This is a novel crammed with wonders." —Times Literary Supplement

"Superb . . . [In] Wonders Will Never Cease you will come across a character's theory that the years between AD600–900 were mostly a fabrication, ordered by the German king Otto III, who wanted to make sure he was the Holy Roman Emperor when the year 1000 came along. I liked this idea so much that I entertained it for perhaps longer than was wise."—Nick Lezard, Guardian

“A dazzling compendium of a golden age of storytelling . . . Wonders Will Never Cease completely lives up to its promise, expertly and meaningfully blending myths and reality in a way that the author hasn't done quite as spectacularly since The Arabian Nightmare.”—The Digital Fix/Geek Life

"The miracle of Wonders Will Never Cease is the wedding of all this vivid but essentially verifiable material with what one might tentatively identify as the stories that told the tales to those who lived them: the fables, legends, flesh-out sententiae, songs, all couched as though time were a shuttlecock." —Strange Horizons

"How is it that I am just learning about Robert Irwin? His magical novel Wonders Will Never Cease about England, in the late 15th century, and the dynastic struggle between the houses of York and Lancaster (as well as the usual problems with the French) against the backdrop of the mythic past of Arthurian England. The main character is Anthony Woodville who rises—literally—from the dead after being 'killed' in battle to become an observer of his own life as a knight, courtier and inadvertent myth maker. Amazingly readable." —David Ward, senior historian, National Portrait Gallery Washington DC in the Smithsonian magazine. Curators choose their books for Christmas

"Acclaimed by A. S. Byatt as one of the UK's greatest living novelists, Robert Irwin has produced his first novel in seventeen years. . . . Meticulously and exquisitely researched, in astonishing detail, the book is soaked through with myths, legends and folklore. . . . The prose is beautifully lyrical and completely captures the reader as they wind through the many threads within. Highly recommended." —The Historical Novel Society Review

“Robert Irwin’s beautifully written novel Wonders Will Never Cease is a novel with a difference. . . . It’s easy for the reader to become confused—and that’s the point. How many ‘historical’ accounts are massively mythologised, and is myth sometimes more meaningful than reality? Fortean questions indeed.”—David V. Barett, Fortean Times

"'It's a book about stories and the way we react to them. It's about changes in the world, about religion, about knowing what is real and what isn't. It's about something in the distance that we can't explain, something glimpsed out of the corner of our eyes. . . . It is a most entertaining read. It is a wonderful book."—clothesinbooks.blogspot

By Robert Irwin
LIST PRICE $17.99
PRICE MAY VARY BY RETAILER