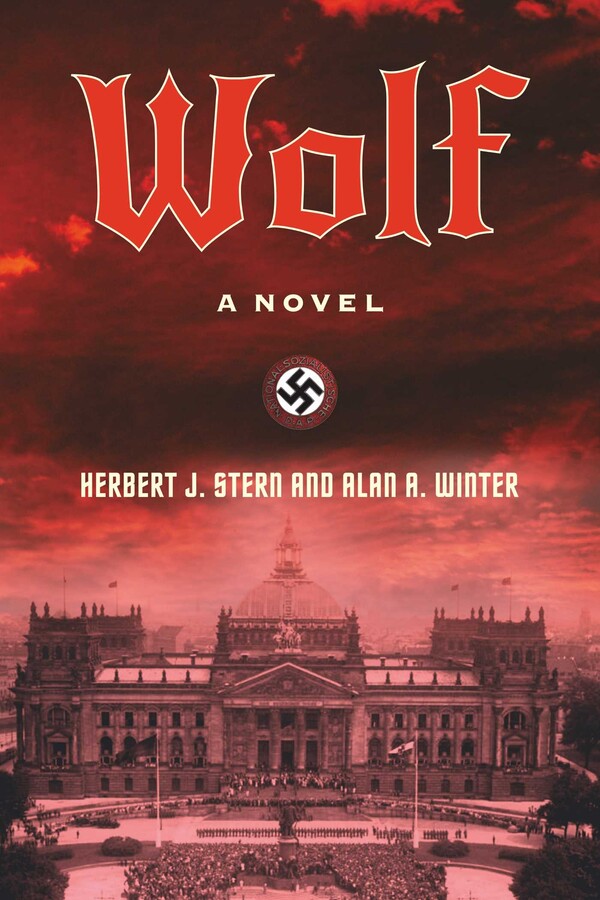 By Herbert J. Stern and Alan A. Winter
LIST PRICE $18.99
PRICE MAY VARY BY RETAILER

In the Great Tradition of Herman Wouk, Author of Winds of War and War and Remembrance, Wolf is a Thoroughly Researched Historical Novel about a Man who is Not Yet a Monster . . . but Will Soon Become the Ultimate One: Adolf Hitler.

Perhaps no one is more controversial or more hated than Adolf Hitler. Yet questions remain about how this seemingly unremarkable man gained power to become one of the most diabolical dictators of all time. Based on extensive research, the historical novel Wolf lifts the curtain on Hitler’s secret life, revealing truths that have been hidden for one hundred years.

The story begins as World War I is ending, when the fictional character Friedrich Richard meets Hitler in the mental ward of Germany’s Pasewalk Hospital. Hitler, a.k.a. Wolf, is an army corporal suffering from hysterical blindness. Unable to see or care for himself, the future Führer relies upon Friedrich for assistance, and the two men form an unbreakable bond.

As Wolf progresses, Friedrich becomes history’s eyes and ears. Interacting with real people, places, and events during a fifteen-year time frame, Friedrich watches Hitler evolve step-by-step into a megalomaniacal dictator. A book for history buffs and fiction fans alike, this remarkable thriller presents a fully-realized, flesh-and-blood Hitler that is more realistic and more chilling than any we’ve seen before.

"A deeply researched novel about Hitler's rise to power, co-authored by Stern, a former federal judge, and Winter, a novelist....The fictional narrator proves a great tool to show Hitler up close, based on the authors' research. For example, historians often portray Hitler as pathologically afraid of women. Richard tells a woman that 'Hitler's romance is with Germany,' not with fräuleins, but Hitler is attracted to young women and girls, including his niece Geli, who commits suicide after ol' Uncle Adolf leaves her for another woman....As the novel ends, the horrors are only beginning. An engrossing look at a monster." —Kirkus Review

“Wolf: A Novel is a historical novel about Hitler, told from the unusual perspective of 1918 amnesiac soldier Friedrich Richard, who encounters Hitler in a mental hospital ward where Corporal Hitler, once a painter, has been diagnosed as a psychopath....It is fortuitous that Herbert J. Stern and Alan A. Winter chose to couch Hitler's life in an alias name, because readers who may have eschewed yet another novel with Hitler in the title, who picked up Wolf for other reasons, will find it an astute, involving, unusual perspective that considers Hitler's mental facilities in a different way. This focus on Hitler's personal life and how he rose to power is based on extensive research, yet the fictional devices elevate these facts to more personal, revealing levels as Hitler hones political power, creates a new ideology for a crippled nation, and involves Frederich in a rise to power that surprises and fulfills them both. In addition to its different approach to Hitler's rise to power, Wolf: A Novel excels in many other ways. Its use of the first person makes events and perceptions more immediate; its subplot of the protagonist's dilemma in following Hitler versus his own inherent rejection of Hitler's anti-Semitism creates an involving conflict; and its focus on Hitler's lifelong friendships, which cemented personal connections in his life, all expand the reader's view of Hitler's personality and the roots of his influences. The authors studied Hitler's personal connections for this book, so these insights and ideas aren't fiction, but are firmly rooted in new research that lends depth to his persona and story. As additional support for the historical research and accuracy of this story, history buffs have rare access to the authors' research at the website www.NotesOnWolf.com....Frightening and eye-opening, Wolf: A Novel will linger in the mind as a prophetic and disturbing story long after Frederich and Hitler's world (and this story) ends." —Midwest Book Review

“Adolf Hitler anointed himself with the name, Wolf, then plotted and connived with remorseless determination to become Der Fuhrer, Dictator, Savior of the Fatherland. As in ancient Greek drama, we know the ending to the story. The riddle is how we get there….A Hitler we did not know existed emerges page by page, all his bits and pieces, certain of his role as Savior of Germany, evil, driven, shrewd, an unrepentant, serial seducer of teenage girls, surrounded by toadies as ruthless as himself but not nearly so smart—his rise and words an unnerving parallel as we witness the continued erosion of democracy today in our own sweet land.  Put this book on the shelf with Ludlum, Michener, and Clavell. Wolf deserves to be in their company.”
—Stephen Foreman, author of Toehold, Watching Gideon, and Journey, and screenwriter of The Jazz Singer, Hostage, and America the Beautiful

“Based on extensive research, the extraordinary novel Wolf, by Herbert J. Stern and Alan A. Winter, lifts the curtain so that the reader can observe through the eyes of a fictional character how a seemingly unremarkable corporal who was denied a promotion for lack of ‘leadership ability’ became dictator of Germany. The result is a gripping page-turner, a masterful historical novel."
—The Jewish Voice

“Wolf offers a front row seat to the Nazi Party’s early years, expertly using the fictional protagonist Friedrich Richard to take the reader on a fifteen-year journey from the end of the First World War to Adolf Hitler’s seizure of absolute power in Germany. The reader experiences the gradual death of democracy in Weimar Germany like a slow-motion train wreck, equally fascinated and horrified. We all know how Hitler’s Thousand Year Reich ended, but Wolf shows us how the nightmare began. A compelling, thoroughly researched, and important work. Wolf is an impressive achievement. Exhaustively researched and richly detailed, it draws on new historical research to paint a fascinating portrait of Adolph Hitler that is more human and recognizable than most depictions—and thus even more chilling and sobering.”
—Alex DeMille, co-author of The Deserter with bestselling author Nelson DeMille

"A novel about Adolf Hitler’s rise to power doesn’t sound like the ideal diversion we’re all craving to escape cabin fever. But Wolf is that rare blend that puts the reader in the limos and backrooms with the gang of diabolical villains who conned the German masses and changed the arc of history, while providing a detailed, factually meticulous account of the fifteen years of tumult leading to the birth of the Third Reich."
—Shawn Tully, Fortune

"The authors have succeeded marvelously in conveying an understanding of Hitler, the person and his rise to power. They have documented the people, events and personalities in the accompanying website, justifying their interpretation of the character of the individuals involved. This is a portrayal of history modified to make it a compelling story rather than a dry recitation of events; a must read."
—The Pulteney Street Survey, Hobart and William Smith Colleges

"The amalgamation of fiction and non-fiction is amazingly achieved and the readers get a perfect picture of the time in which the Nazis rose to power."
—Ninu Nair, Bookishloom

"Wolf helps explain what many readers will have only wondered about: How did the citizens of Germany not simply allow, but actually vote, a man like Adolph Hitler into the absolute power that would lead to him becoming perhaps the greatest monster the world has ever seen?...It is in its best moments a horrifying reminder of just how easily something like this could happen again."
—Sam Sattler, Book Chase

"Wolf provides readers a glimpse into the history of Hitler's rise to power and reminds us of the strange charm he held in the eyes of his followers....Wolf was a fantastic, well-written, and researched novel that will very much leave you feeling chilled to the bone."
—BOOKED J

“Wolf will incite intense discussion in historical circles and book clubs alike. It is a poignant, persuasive, and ultimately terrifying story of how one man came to bend the path of history through oppression and genocide by taking one step at a time.”
—Amy Wilhelm, senior writer, Book Club Babble

"Wolf, by Herbert J. Stern and Alan A. Winter, is a thought-provoking novel based on extensive research, a masterpiece of historical fiction that brings to life the years of those critical events between WWI and WWII....An exquisitely written, absorbing read, that I completely inhaled....This is a brilliantly written book, with its atmospheric  descriptive details and absorbing narration, that will stay with you long after you close the  book....A breathtaking novel that gives the reader the opportunity to be front and center in a dark and emotional time during this period of our world’s history."
—Gwendalyn Books, gwendalynbooks.blog

"This book is very well written, and the authors did not take many, if any, historical liberties. The novel is filled with German class warfare in the political arena, and it makes an effort to explain the German people’s economic struggle. While the main character is fictional, many of the historic persons are just as interesting and engaging."
—Man of la Book

"I totally enjoyed this book and the writing style of both authors. I would highly recommend it as your winter read."
—Michelle Kaye Malsbury, Bookpleasures.com

"This is truly a stunning piece of literature. It’s riveting, fascinating, and it draws you in. If you’re like me, you may try to see a human side to Wolf....You always see Hitler as how he was as a dictator, at his full amount of power. But my mind always wonders, what led him to where he was? What was he like? Did something happen to get him there? In Wolf, we see him and it is equal parts terrifying and interesting because as a reader, we know what he becomes. We know what lay ahead and it literally feels like a roller coaster that is heading off the rails—you’re not getting off. You’re far too involved and invested. It’s truly astonishing. The research gone into this work is to be praised. I don’t think there’s anything about this that they didn’t research. I am always a sucker for good research. It felt so real, so visceral. I learned so much and I also learned, there is no sense in trying to humanize him. I absolutely enjoyed this book and its unique view. It certainly opened up my eyes."
—The Quirky Lady Bookworm

"How did a psychopath convince an entire nation to let him rule as a dictator? How did he manage to garner the support of his peers and community? Who is Adolf Hitler? What were the motivations for his actions? All these questions are answered in this book....This book also challenges some erroneous reports on him and some historically inaccurate facts as well. The book is so well researched....I think everyone should read this book to get an understanding of Hitler and his journey. I guarantee you will not regret it."
—Fazila's Book Review Corner

"I applaud the authors for giving us real historical characters that were well researched. This gives them a depth not normally found in many historical fiction novels. The handful of fictional characters each had their place and helped give the protagonist, Friedrich Richard, purpose and meaning beyond his relationship with Hitler."
—What's Beyond Forks?

By Herbert J. Stern and Alan A. Winter
LIST PRICE $18.99
PRICE MAY VARY BY RETAILER