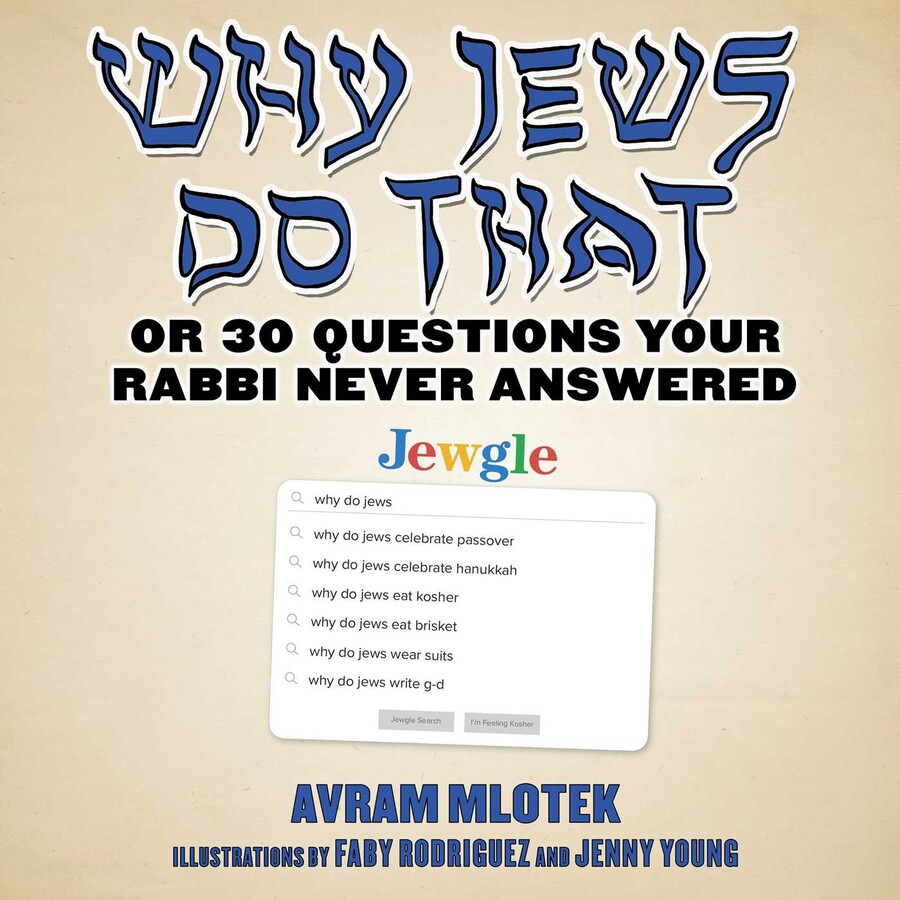 Why Jews Do That

Or 30 Questions Your Rabbi Never Answered

A Fun Take on "Judaism for Dummies" that Will Answer All Questions Wondered by the Goyim and Jewish People Alike!

When the subject of religion comes up, people often get very shy and are worried about offending. Now, if there was only a book that covered all the nooks and crannies of a religion, written in an easily digestible way...

Well, now there is! Written by Rabbi Avram Mlotek, Why Jews Do That is a terrific look into the Jewish religion, answering all the tough questions you've been afraid to ask. But this isn't just for the Jews among us. Just because you're Catholic, Muslim, Hindu, Buddhist, or the like, doesn't mean you cannot enjoy an inside look to find out if Jews believe in Jesus, what kosher really is, and how we keep our yarmulkes secured to our heads. So have no fear, as Jews are here to help!

Some of the tough questions answered by Rabbi Mlotek include:


Why Jews Do That is your one-stop shop for answers to all the questions you wanted to know, but were too shy to ask. So whether you're a devout follower, a casual observer, someone marrying into the faith, or just interested in buffing up your Bible knowledge, Rabbi Mlotek will guide you through the challah, mitzvahs, and shiksas that make Jewish live so...lively.

"What Steph Curry is to the three-pointer, Avram Mlotek is to rabbi-ing. Let him—and this book—-be your guide to a deeper understanding of Judaism."
—Bari Weiss, author of How to Fight Anti-Semitism and staff editor and writer for The New York Times

"If you want a Judaism for Dummies with a shmear of snark and potty mouth, this is the book for you."
—Jackie Hoffman, Emmy-nominated comedian and actress

"Learning the basic information about Judaism is often ponderous and, as a result, many people never learn it. But in the capable, consistently accurate and sometimes irreverent hands of Avram Mlotek, the process becomes both fun and funny."
—Rabbi Joseph Telushkin, author of The New York TImes bestseller Rebbe and Jewish Literacy

"As someone who has undergone a conversion journey to Judaism with Rabbi Avram, I can truly say that he is not an ordinary rabbi...and neither is this book. I highly recommend it to people who are seeking to learn Jewish fundamentals but in a modern, hip, and entertaining way."
—Ruta Ryvyte, Lithuanian model and Instagram influencer

Why Jews Do That

Or 30 Questions Your Rabbi Never Answered