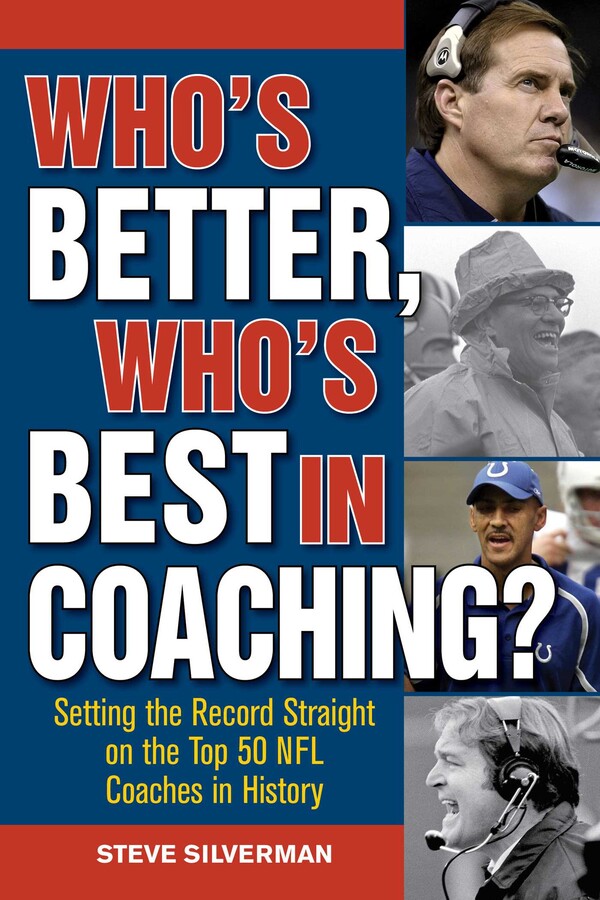 Ranking the best coaches in NFL history is no easy task. How do we decide which coach had a bigger on-field impact? Or the best tactical skills, both defensively and offensively? Not to mention measuring the strength of what a coach does behind the scenes, how he motivates his players, or how he keeps them from cracking under the pressure. Is the Hoodie” the greatest coach ever, or just lucky to have Tom Brady? What about Bill Parcells, Vince Lombardi, and John Madden? Where do they rank?

Such are the questions that pro football writer Steve Silverman addresses in Who’s Better, Who’s Best in Coaching?. As statistician Elliott Kalb did with baseball, basketball, and golf, and Silverman himself did with football players in Who’s Better, Who’s Best in Coaching?, Silverman takes the next logical step in this new book. Taking the analytical methods he developed over his years as a senior editor at Pro Football Weekly, he applies them to an evaluation of coaches going back to the earliest days of the NFL. The result is a fascinating ranking of the best of the sideline, from legendary old-timers like Vince Lombardi to present-day blue-collar coaches like Tom Coughlin.

Throughout, Silverman discusses the many considerations that must be made when comparing modern coaches with coaches of past eras, or when comparing abrasive and domineering coaches with the more relaxed and Zen-like coaches. Including biographical essays on those top fifty coaches and detailed statistics for their career records in both the playoffs and regular season, Who’s Better, Who’s Best in Coaching? is a must-have for anyone who considers football more than just a game and who is fascinated by how it’s coached.