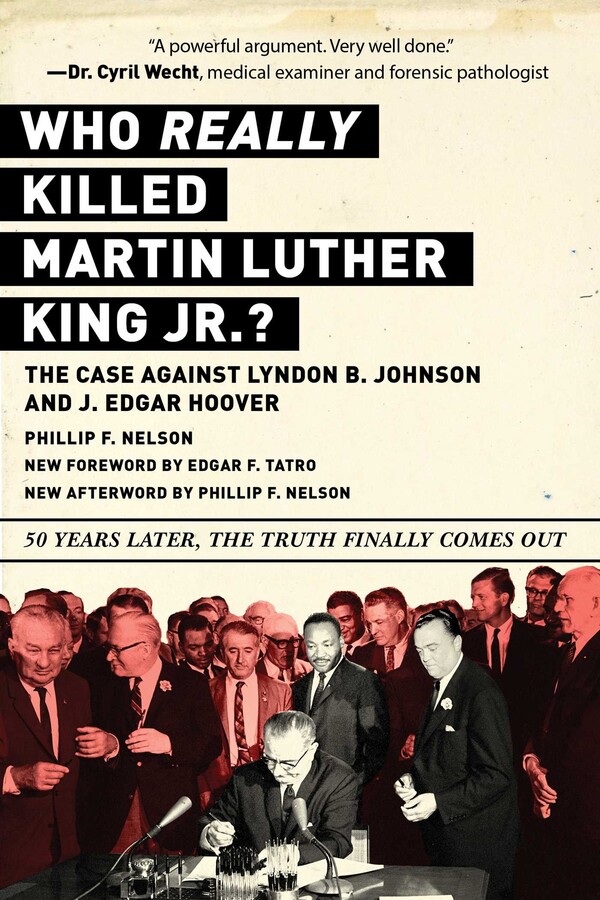 The Case Against Lyndon B. Johnson and J. Edgar Hoover

The conventional narrative of MLK's assassination is an FBI and CIA disinformation tactic. Find the proof here.

One of the most infamous and devastating assassinations in American history, the murder of civil rights leader Martin Luther King, Jr., was also one of the most quickly resolved by authorities: James Earl Ray was convicted of the crime less than a year after it occurred. Yet, did they catch the right person? Or was Ray framed by President Lyndon B. Johnson and FBI Director J. Edgar Hoover?

In Who REALLY Killed Martin Luther King, Jr.?, Phillip F. Nelson explores the tactics used by the FBI to portray Ray as a southern racist and stalker of King. He shows that early books on King’s death were written for the very purpose of “dis-informing” the American public, at the behest of the FBI and CIA, and are filled with proven lies and distortions.

As Nelson methodically exposes the original constructed false narrative as the massive deceit that it was, he presents a revised and corrected account in its place, based upon proven facts that exonerate James Earl Ray. Nelson’s account is supplemented by several authors, including Harold Weisberg, Mark Lane, Dick Gregory, John Avery Emison, Philip Melanson, and William F. Pepper. Nelson also posits numerous instances of how government investigators—the FBI originally, then the Department of Justice in 1976, the House Select Committee on Assassinations investigators in 1978 and the DOJ again in 2000—deliberately avoided pursuing any and all leads which pointed toward Ray’s innocence.

This updated paperback edition now includes a foreword from LBJ researcher Edgar F. Tatro, an educator, author, and participator in the House Select Committee on Assassinations who is among the first generation of JFK researchers. His unique insights into what he refers to as the "Texas connection" are an invaluable resource to anyone wishing to understand the full dimensions of the conspiracy behind the JFK assassination.

"Philip Nelson, who has generously complimented my work on the King assassination, has also provided us with some missing valuable historical information about the complicated actions of Lyndon Johnson in the context of events in the 1960s. I have long believed the detailed information given to me by my friend, Madeleine Brown (LBJ's mistress), about his knowing involvement and collusion in the assassination of JFK. Philip Nelson's research about Johnson's collaboration and his support of the profoundly illegal and evil public actions of J. Edgar Hoover fills in many blanks and is a highly valuable historical contribution. I urge, and hope, that this work will by widely read."—Dr. William F. Pepper, author of The Plot to Kill King.

"Phil Nelson has applied brilliantly the intelligence he has developed over the years, from researching the JFK assassination to the assassination of Martin Luther King Jr. Finally, we have detailed and convincing analysis of the role Lyndon Johnson and J. Edgar Hoover played orchestrating Martin Luther King's murder .... For decades, the mainstream media and conventional historians have covered up LBJ and Hoover;s role in killing two of the greatest political heroes in American history. After Phil Nelson's book, this will no longer be possible."—Jerome R. Corsi, PhD, Washington bureau chief for InfoWars and author of New York Times bestsellers The Obama Nation, Unfit for Command, and Killing the Deep State.

"No honest assassination investigator can fail to come to terms with Nelson' work. Nelson's analysis of Operation MK-ULTRA as it may explain elements of Ray's behavior is fascinating. He has also significantly contributed to our understanding of Raoul, the shadowy figure who was Ray's handler for nine months to the assassination of Dr. King."—John Avery Emison, author of The Martin Luther King Congressional Cover-up: The Railroading of James Earl Ray

"Phil Nelson has earned himself a well-deserved reputation as a discerning seeker and curator of the real truth behind these seinal events in US history. His new book...is sure to enhance that reputation. A timely update on the circumstances surrounding his death, and a welcome corrective to the official narrative, Nelson's book is an indispensable read in this, the fiftieth anniversary of his murder."—Greg Maybury, editor, poxamerikana.com

"I picked up this book with more than a little skepticism. Having been a voracious consumer of JFK and RFK assassination books, I thought I'd give Phil Nelson's Who Really Killed Martin Luther King, Jr.?: The Case Against Lyndon B. Johnson and J. Edgar Hoover, a try. I had already read most of the books about MLK's killing that Nelson cites in this work. And after all that, I had come to the conclusion that James Earl Ray had killed Martin Luther King. With the Kennedys' assassination, a conspiracy is easier to accept: It was the mafia, the CIA, Lyndon Johnson . . . etc. James Earl Ray's guilt, on the other hand, seemed to me to be more clear-cut. He was caught easily, he confessed, and his retraction of his confession seemed convenient and revisionist to me. I frankly put it out of my mind. That is, until this book.

Phil Nelson goes to the trouble that so many other authors do not, of using primary source and contemporaneous documents. Like Peter Janney's Mary's Mosaic,he makes an argument that is both compelling and very difficult to refute. How do you argue against facts? None of us want to think the worst of our government and our leaders. But sometimes we should. Sometimes a sociopath will slip through the cracks. And sometimes those sociopaths become the director of the FBI or the President of the United States. The American people have a right to know the facts of our own history.We have the right to know who killed Martin Luther King, Jr. We have a right to know if our government was involved. If it was, we have Phil Nelson to thank for shining some light on that awful crime. "—John Kiriakou, former CIA officer, former senior investigator for the Senate Foreign Relations Committee, and author of Reluctant Spy and Convenient Terrorist, among others.

Voices From the Past Affirm Themes of This Book

“There is abundant evidence of a major high-level conspiracy in the assassination of my husband, Martin Luther King, Jr. And the civil court’s unanimous verdict has validated our belief. . . . The jury also affirmed overwhelming evidence that identified someone else, not James Earl Ray, as the shooter, and that Mr. Ray was set up to take the blame.” —Coretta Scott King, December 8, 1999 civil trial

“I don’t [think] James Earl Ray acted [alone or with anyone else]. . . . I don’t think he had anything to do with the killing. . . . I think that there was a determination in very high places that our movement had to be stopped. . . . But it certainly went as far as the FBI. And the Memphis police. And the US military.” —Andrew Young, aide to MLK Jr. and activist, diplomat, and politician, in the CNN documentary Eyewitness To Murder: The King Assassination (aired April 3, 2010)

“The central factor of what happens is that, after the assassination, this assassin rushes out of the rooming house and what does he do? He does a very amazing thing. He takes a suitcase and very carefully drops it in front of a store.” —Truman Capote

The Case Against Lyndon B. Johnson and J. Edgar Hoover